Thank you very much for extending support to our child Shanku. Shanku is incidentally the first child to walk into Sphoorti premises in 2006 along with his elder sister Madhuri. Madhuri is in STD XI now while Shanku is preparing for his STD X Board examinations.

We raised around $900 towards Shanku's living and education-related expenses through this campaign.. Out of this, $ 200 were spent on his food, $70 on his clothing, $80 on her personal expenses like face powder, soaps etc and $100 on his studies - books and school bag et al. 150 was spent on his health and transportation. The remaining $450 has been set aside for his STD XI studies next academic year. We hope you will continue to support his studies in the years to come

Shanku's mother Yashoda was married to Ravi, an Auto driver. Ravi was a drunkard and was subjecting his wife to untold suffering and violence. Unable to bear his torture, Yashoda powdered her glass bangles and swalled the powder. Though she survived the suicide attempt, her food pipe was completely damaged and for two years, she was not able to eat the normal way. Meanwhile, her health deteriorated and after two years, she passed away because of multiple complications. Shanku and Madhuri were left with their grandparents while their father left them without a trace. He subsequently married another lady and has two children. Shanku last saw his father in 2009. But he has no bitterness towards his father or anyone else.

In 2006, when Shanku's grandmother came to know that Sphoorti was being set up, she sent her grandchildren to our premises. Sphoorti came into being when Shanku and Madhuri stepped into our modest premises.

From a timid and diffident child of 4 years, Shanku has now grown into an adolescent of 15 years. He has been studying well all through his stay in Sphoorti. Besides studies, he also earned name for his truthfulness and upright character.

Shanku passed STD IX examinations with a GPA of 8.5. He is currently preparing for his STD X Board examinations. We expect him to cross 9 GPA on a scale of 10.

Shanku's journey is Sphoorti's journey. We hope that he will study very well in higher grades and bring us accolades. 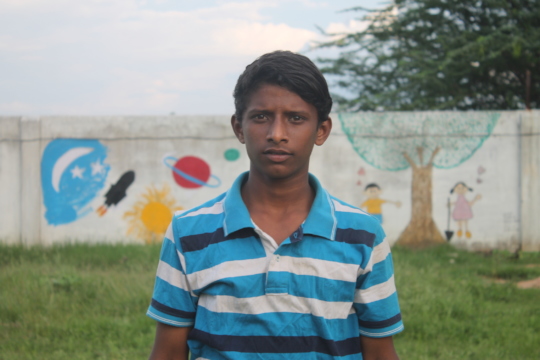 Thank you so much for your support to this campaign for more than two years. Your support to all the GlobalGiving campaings has been extremely valuable and helped us in bringing some change in the lives of our children. These children would have otherwise been living a life of drudgery and ignorance and become a liability to society at large.

In this report, we wish to share the story of a bright child Ali. He is 15 year old boy who comes from a tiny village in Ranga Reddy district, His mother is a daily wage laborer while his father deserted the family when Ali was very young. Ali joined Sphoorti in 2008 after his relatives were not in a position to help his studies.
Prior to joining Sphoorti, Ali was going to a local Government run school where the teaching standards and infrastructure were of abysmal quality.

After he came to Sphoorti, he was given admission in a local English Medium High School. he completed STD IX with a score of 76% in his STD IX and is studying with greater dedication in his STD X. We hope that he will get a good score in his Intermediate education.

Through good academic performance and your support, Ali has gained a lot of confidence and is also focusing on his social/soft skills. Together with good academic record and behavioral traits, we hope that he will succeed in whatever career he chooses.

Ali wishes to be a Software Professional after his Undergraduate studies are over.

Thank you very much for extending support to our child Nani. We raised $500 towards Nani's living and education-related expenses. Out of $500, $ 180 were spent on his food, $60 on his clothing, $80 on her personal expenses like face powder, soaps etc and $100 on his studies - books and school bag et al. The remaining were spent on his health and transportation.

Nani comes from a very poor family. He is the only child to his parents. His father passed away when Nani was very young. Nani's mother has been working as a domestic help

Seeing his mother's plight, one of our friends brought Nani to Sphoorti.

Nani passed STD IX examinations with a GPA of 8.9. He is currently preparing for his STD X Board examinations. We expect him to cross 9 GPA on a scale of 10.

When Nani joined Sphoorti, his health was not in a good shape. His neighborhood was a typical slum area. Years of malnutrition took toll on his health. His dental health was in a disarray. We took help of local physicians to improve his condition.

After a few years of staying at Sphoorti, Nani began to mix up well with other inmates. He is one of the toppers in STD X batch in his class. He has been participating in various cultural and sports programs in school and outside.

Nani wants to study Computer Science and become an entrepreneur when he grows up.

‹ 1 ... 17 18 19 20 21 22 23 24 ... 42 ›
WARNING: Javascript is currently disabled or is not available in your browser. GlobalGiving makes extensive use of Javascript and will not function properly with Javascript disabled. Please enable Javascript and refresh this page.