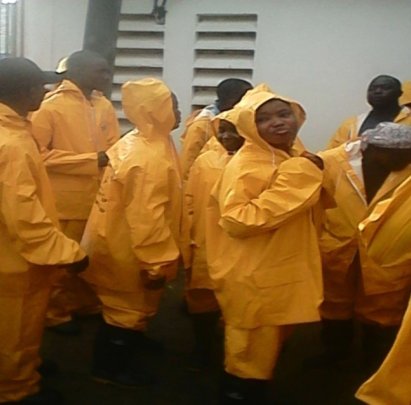 Tok for Pikin Welbodi volunteers in their new gear

Recently Tok fo Pikin Welbodi (TfPW) volunteers developed a proposal requesting Welbodi Partnership (WP) to fund the simple procurement of high quality rain gear for 35 volunteers. Sometimes basic rain gear can mean all the difference in reaching communities and continuing the Ebola response. Experience has taught them that the rains always pose a serious threat to their community work and being able to work, even under the heaviest downpour, allows them to spread vital messages and aid to areas they work in.

During the rainy season Sierra Leone experiences heavy monsoons; it is often very challenging to continue community work during this time. Providing these simple tools allow for volunteers to continue their vital community work during the season. Today, thanks to Global Giving, our volunteers have been able to reach the far corners of their communities with health related messages and lifesaving interventions during the rainy season. One of the volunteers said that “With this rain gear, we are now unstoppable!”

Not too long after the gear arrived, Freetown experienced one of the heaviest floods in recent history. The floods have displaced approximately 10,000 people, destroyed properties and the casualties are still being counted. With the use of the rain gear, volunteers were able to reach out to homes and schools to rescue children that were caught by the sudden floods. Annual exams were taking place and many children were stranded in waist high water in the schools while their homes were washed away.

Had it not been for the timely intervention of these volunteers, aided by their new gear, the devastation to lives and homes would have been greater in those communities. During a visit to one of the severely affected communities, Alpha Sesay, one of the volunteers, said “I feel proud that we were able to help community members during this trying time and it is our hope that we [volunteers] will continue to work with Welbodi Partnership to save our communities from such natural disasters.”

Over 6,000 People reached in Community Push for Getting to Zero.

By Yembeh Marah - Project Manager for Community and Primary Health 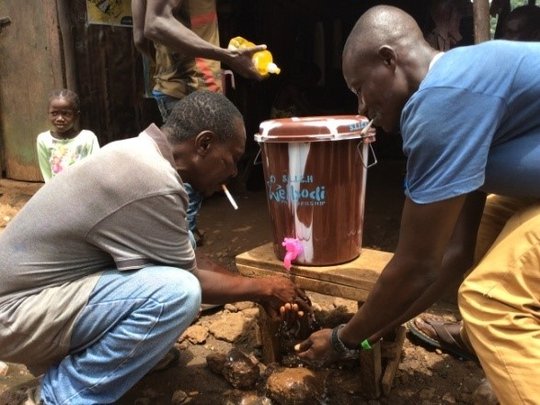 Over 6,000 Educated About Ebola Prevention in Local Communities.

Thanks in part to a grant from GlobalGiving and your donations, we’ve been able to support our community group, Tok fo Pikin Welbodi (Speak for Children’s health) in their implementation of a massive Ebola Community Sensitization project focused on youths within three constituencies in the East end of Freetown. This project happened as a result of the surge in cases in Western Area and it became evident that there was need for practical messaging and engagement of communities. The theme of the project was “Getting to and staying at Zero Ebola cases. Tok fo Pikin Welbodi volunteers were trained on the use of the Ministry of Health and Sanitation’s approved messages for Ebola affected communities. From these messages key themes were shared and they were provided with hand washing buckets, liquid soap and posters to be distributed in the communities.

The leaders of Ban Palor Poyo Bar at Kissy Bypass Road said, “We have been left out of this Ebola fight and we have never had hand washing facilities in our base. Now that you have brought this bucket and the liquids soaps for us, we will ensure that we properly use them. The messages about calling 117 for any suspected sick person(s), avoiding secret burials and the reasons for effective hand washing are very helpful for us. Thanks for the efforts and remember to come back around. Take my picture and show them we have started washing our hands and we will continue. “ 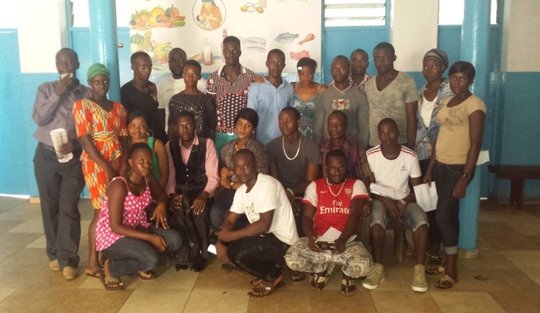 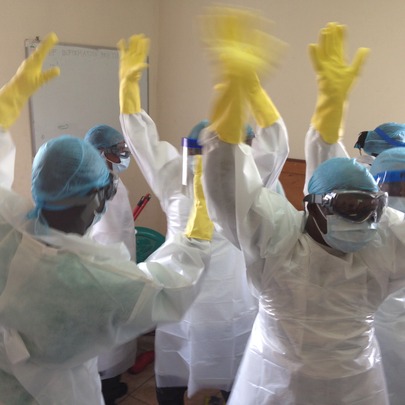 Hospital staff learning to use PPE

I saw a blur of yellow gloves and dancing bodies, while the instructors – two nurses employed by the Ministry of Health and Sanitation in Freetown – called out instructions in Krio, a local creole language. Waves of laughter filled the room as cleaners, laundry staff, and other non-clinical health workers shimmied and shook to test the fit of their personal protective equipment (PPE) in a training session on how to prevent infections and keep themselves and other safe from Ebola.

Having just arrived in Freetown a few days before, I was pleasantly surprised to see the grim image of workers clad in PPE—an image that had become, in many ways, the ultimate symbol of the Ebola outbreak—transformed into a scene of  fun and empowerment. “The PPE shake,” I later tweeted.

What I was watching, in February 2015, was a pilot of a training class that will be rolled out in hospitals nationwide in Sierra Leone. The Welbodi Partnership is playing an important role in providing this training, as well as ongoing mentorship and other support for infection control, to staff in three Freetown hospitals.

We know, however, that it’s not only hospital workers who need to stay safe. With your support through Global Giving, we will provide opportunities for smaller, primary health facilities in the poorest neighborhoods in Freetown to request this kind of training, or to propose other initiatives they believe will help stop the spread of Ebola. We know that health workers and other local partners are well-placed to identify obstacles and opportunities in the fight against Ebola, and we are committed to providing them with both financial and non-financial support to exploit those opportunities.

You can help. Just $50 can sponsor a training session, and just $100 can buy an infrared thermometer to screen patients before they enter a primary health clinic, identifying those with fever or other possible signs of Ebola in order to protect staff and other patients from infection

Communities, too, are essential to fighting this deadly disease. Next time, we’ll report on some of what our community partners are doing, with your support, to help Sierra Leone reach zero infections!