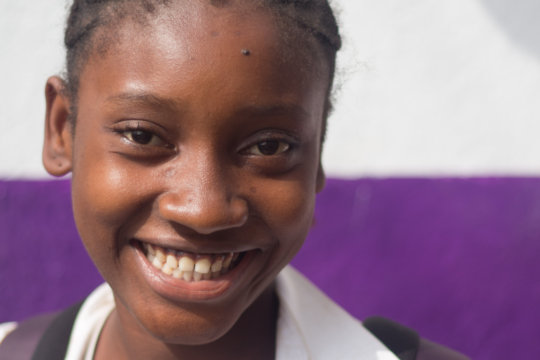 With the opening of two new schools in January 2016, total student enrolment in Rising Academy schools has risen from 83 students at the end of 2015 to 390 students today. All three Rising schools are majority female, with girls representing 56% of the total student body.

Thanks to the support of our generous donors, we have expanded our scholarship programme to ensure that more students from disadvantaged families are able to access the high quality education provided in these schools. 65 students are now receiving needs-based scholarships, or 17% of total enrollment. Of these, 42 are girls (65%).

Hawanatu, a JSS2 student at the new Rising Academy school in Tengbeh Town, is one of the students benefiting from the expanded program. “I really enjoy the way the teachers teach us because they teach us correctly and if anyone did not understand they will go over it again for us to understand better,” she says. “I like the way the learning is going on. I never attended this kind of school. I will wish to be here till S.S.S [senior secondary school] level.”

Assessing need is difficult when most employment is informal and accurate data on families’ financial circumstances are limited. However, we can get a picture of the economic and demographic backgrounds of the families the scholarship programme is supporting. These families typically have the following characteristics:

Hawanatu’s situation is fairly typical. Her mother is a single parent supporting three children, of whom Hawanatu is the eldest. She understands the responsibility this entails. “In future, I want to become a banker and if my dream come true I, my family, and others will enjoy and get the benefit of me. And I will make sure that I will take my mother out of the suffering that she is going through right now just because of me. I am [her eldest child], that is why she is putting her focus more on me, for me to continue my education. And I promise that I will never let her down. I have one younger sister and one younger brother. That is why am trying all my level best for me to become a good person. So that I will support them all.” 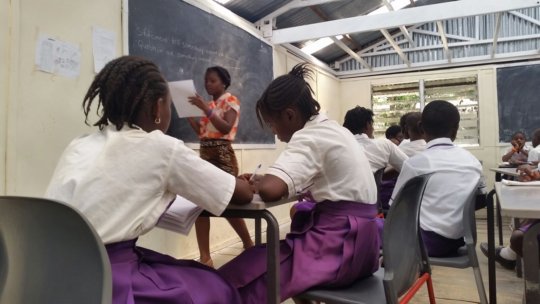 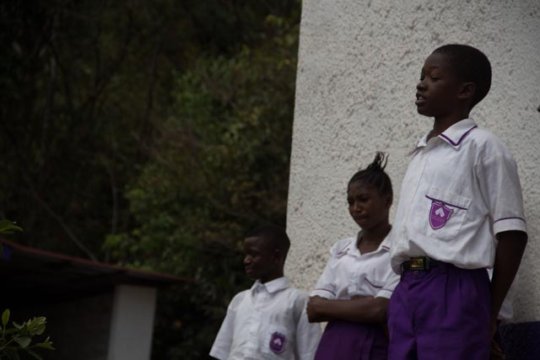 “Excellent written and spoken English.” So begins the person specification for a job recently advertised with a major international NGO here in Freetown, Sierra Leone.

That first part – written English – gets a lot of attention from government, development agencies and school leaders. As we have noted before, there is growing evidence that Sierra Leone faces a literacy crisis. A major national inquiry into under-performance in public examinations noted that “prominent among candidates’ weaknesses was their ‘inability to read and write English.’”

But as this job advertisement and hundreds of others like it show, spoken English – oracy – is arguably just as important to students' future job prospects and life chances as literacy. Yet oracy gets much less attention. It does form part of the language arts curriculum. But it’s less obvious how to teach it, it’s harder to test how well students are progressing and, with no final exam, there is no certificate to say a student is proficient and no way of holding schools to account for whether they are developing oracy skills.

The result is oracy isn't taken very seriously. Indeed there is good evidence that the teacher-centric, rote learning based style of teaching that is still pervasive in many classrooms in Sierra Leone deprives students of the opportunity to practise their speaking skills. Speaking up in front of others also requires confidence and an understanding that the classroom is a safe space in which it is okay to make mistakes. Few classrooms create this atmosphere.

For students at Rising Academies’ three schools in Sierra Leone (22 of whom are currently being supported by donors to our GlobalGiving campaign) the expectations are different. The pedagogy puts much more emphasis on opportunities for students to practise their communication skills, by working collaboratively in pairs or groups, by sharing ideas, or by explaining their thinking about how they tackled a question. In addition, the timetable sets aside dedicated opportunities for students to practise speaking in front of others, including leading on certain parts of the whole school meetings that take place twice a week. Particularly popular with students has been a weekly moot-style debate, in which teams of students practise the skills of arguing for or against a proposition, and listening and responding to the other side’s arguments. Finally, as we have explained in a previous update, some of our curriculum is organised around projects, which usually culminate in some kind of set piece presentation to an audience.

In a recent set of interviews, three students asked to talk about their experience at Rising Academies all singled out the progress they had made in their speaking as one of their proudest achievements. “I was not expecting myself to stand in front of so many people,” says Mariama. “[In my old school] I was not taught how to stand, how to be bold to say my point…I feel proud of myself that I have the zeal to stand up and say something in front of people.” Mary, a fellow student and recipient of a scholarship through our GlobalGiving project, singles out the experience of debate: “Debating is a good activity for us here. I can even stand now and talk in front of people.” Another scholarship student, Sallay Matu, agrees. “There are many changes I have experienced. One is the area of my speaking. I was not good at speaking – still now I’m not good but I am practising how to speak more. Even when my parents send me to go and buy I am practising how to come and debate.”

To measure the progress might be harder for speaking than it is for reading. But that doesn’t make it any less important. For these students, finding their voice means a lot. 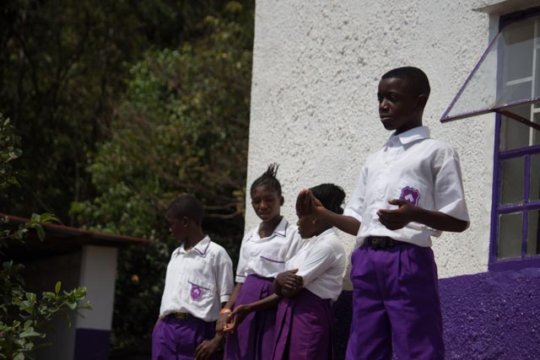 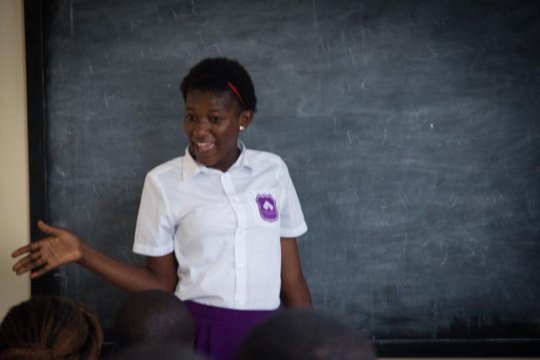 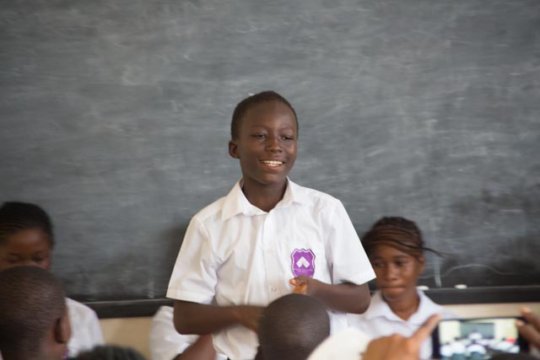 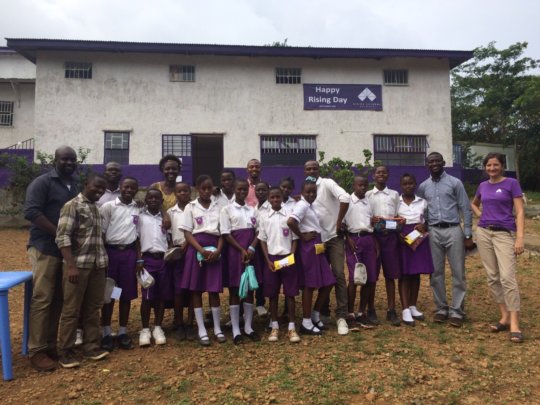 On September 29th, students at Rising Academy Regent celebrated Rising Day. The event, the first of what will become an annual event, was timed to commemorate the one-year anniversary of the launch of our Ebola Crisis Home Outreach (ECHO) programme.

The whole school came together to celebrate all they had achieved in that time, and a number of prizes (voted for by students and teachers) were awarded. Categories included the most helpful, hardest-working, most improved, and highest-performing boy and girl – as well as the best givers of feedback.

Students also shared their happiest memories from the past year. Some spoke of personal achievements, such as performing the poem they had written back in January during their “Finding Your Greatness” project, or going out and doing their survey in the community as part of their religious tolerance project.

But what was interesting was how much the theme of collaboration featured in what students spoke about. The Rising Academy school creed says “We work together, learn together and succeed together”, and it was clear that for a number of students this has had a big impact on their experience. Eugene, 12, said “My happiest memory was the first day at school, because that was the first time in my life I had the opportunity to work as a team, and by working as a team I will achieve much, because my colleagues give me feedback.” Fellow student Sulaiman used his comments to celebrate how much one of his colleagues had improved over the year. “My happiest memory at Rising is today. This day was marvellous because I can see Elfrida, the last time when she was debating she was very nervous and today she is confident and audible.”

A lot has changed in one year, for us and for Sierra Leone as a whole. When we launched ECHO, Sierra Leone was reporting 300 new cases of Ebola per week and schools had been forced to stay closed after the summer holidays. As we write, Sierra Leone has not seen an Ebola case in more than three weeks and the countdown to zero has entered its final weeks. Schools were finally allowed to re-open in April, so students are half way through their second (and final) term of a compressed academic year.

Although a few of our Home Outreach groups continued (in one case right up until early September), the focus of our GlobalGiving project since April has been on ensuring that students from the most disadvantaged families in our catchment area can continue to access excellent education.

Thanks to the generous support of our donors, over a quarter of Rising Academy students – 25 this academic year, rising to 100 when two new Rising schools open in January – receive scholarships to enable them to attend. Given the demographic profile of the communities we serve - 1 in 3 Rising parents never went to school themselves, and the most common occupations are petty traders and manual labourers – this is essential to maintaining accessibility.

Beyond just keeping kids in school, we want to make sure scholarship students are actually learning something when they are there. Our preliminary data show that they are. In end of term assessments over the last year, scholarship students have progressed at broadly the same rate as our other students. For example, reading scores improved 10% last term, compared to 11% for the year group as a whole. Maths scores improved 22% for scholarship students last term, the same as the year group as a whole. It is really encouraging that with the right kind of teaching and learning, these students are confounding the expectations that would traditionally have been placed on them.

As we have noted before, one of the challenges in monitoring our impact is that our assessments are not fine grained enough. As part of a new partnership with Oxford University, we will be testing students three times a year using much more fine grained measures of their reading and maths ability, which will allow us to build up a more detailed picture. 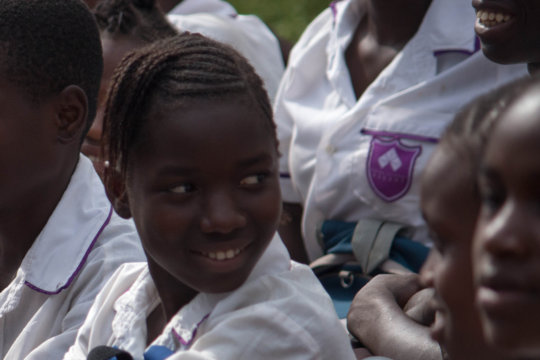 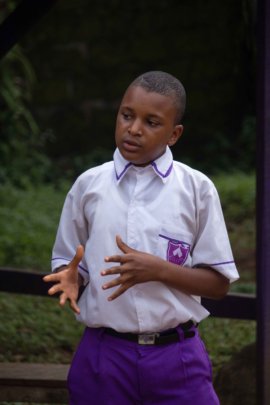