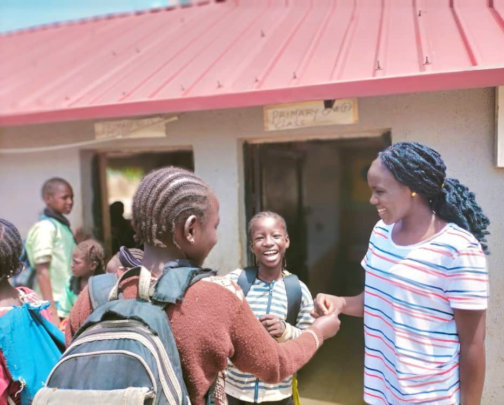 Our 35 scholarship recipients are successfully wrapping up their 2020 - 2021 school year.  The girls attend Brightland Academy in southeast Nigeria, Foundations Academy in northern Nigeria, Anglican Girls Grammer School in the capital of Abuja and Fruitful Vines in southwest Nigeria.  In May, we were excited to welcome a new partner school to our program - Lightway Academy in Abuja.

When the pandemic hit Nigeria last year, we donated tablets loaded with e-books and educational software to help our scholarship recipients and their classmates continue learning.  Since that time, the tablets have been integrated into the academic programs at our partner schools.  Students continue to read and learn at a higher level than before the pandemic.  We donated 220 tablets in 2020, and earlier this year, we donated another 110 tablets to worthy students at our partner schools.

We met Bilkisu six years ago, after she was forced from her home by Boko Haram terrrorists and spent years shuttling perilously between displacement camps and temporary shelters.

Though she had endured the darkest of times, we immediately recognized Bilkisu's fierce resilience & innate brilliance. We were honored to have her join our first class of our David Oyelowo Leadership Scholars.

Bilkisu excelled at school, serving as a student leader and even winning a national writing contest. When she graduated last year, Bilkisu enrolled in online university classes and accepted a position as an assistant teacher at a refuge camp in Abuja.

"Every day, I get to give hope to girls in the same position I was once in," said Bilkisu. "What an inspiring way to show my gratitude for all I have received from my GEANCO family."

Bilkisu empowers the next generation, in quiet celebration over the terrorists who once sought to destroy her. For that, we rejoice, and we give thanks to you! 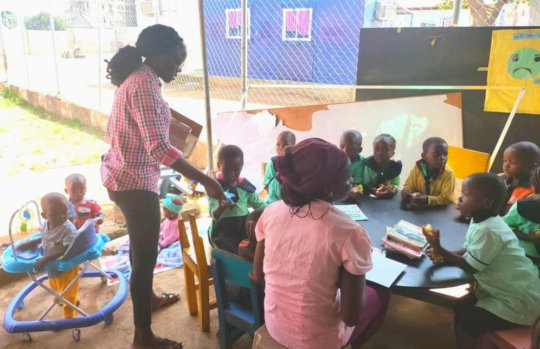 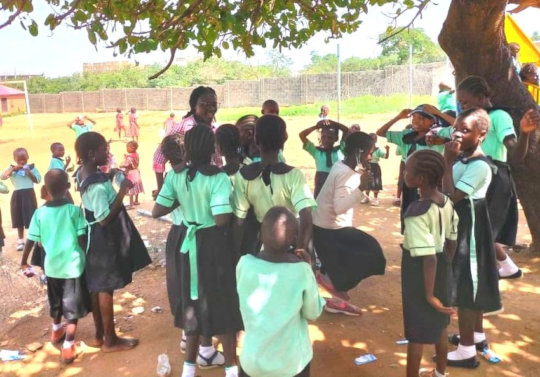 Continuing to save Mother & Child 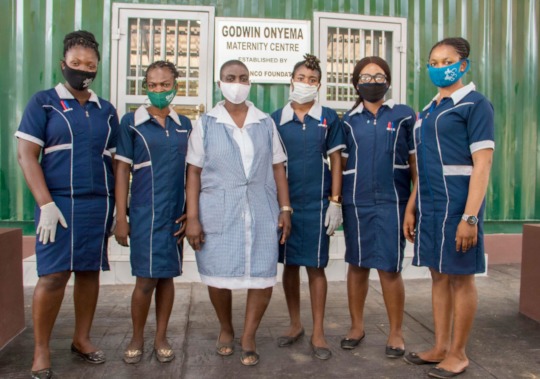 We are especially excited that our maternity clinic program continues to successfully grow and expand.  We have two functioning modular clinics operating in Nigeria right now, with three more planned by the end of the year.

The GEANCO Foundation has intervened in the area of medical missions for orthopedic surgery in Nigeria since 2011. In 2014, they began to focus on another area of health development—maternal health and nutrition.

The Foundation wanted to reach out to underserved pregnant women who were likely to develop anemia in pregnancy because of poverty. “The first time many of them come, they are usually anemic. When you test them with the pulse oximeter, you will see someone almost due for delivery and the person is seriously anemic. It could be a problem if they enter labour in that state,” says Paschaline Chukwuka, Nigeria In-Country Manager, GEANCO Foundation.

To mitigate this problem, GEANCO started an anemia control program at two private hospitals, Annunciation Specialist Hospital at Emene and Mother of Christ Specialist Hospital at Ogui Road, both in Enugu State. In 2018, the Foundation expanded their reach to government primary health centers in Enugu to reach more underserved women.

They started with Nchatancha-Nike Primary Health Centre. Chukwuka says the health center at the time was comatose, with only a few women coming for immunization. There were no routine antenatal activities going on at the health center. The anemia program was designed to encourage pregnant women to come for antenatal care and get tested for anemia.

The Foundation provided funds to the facility to cover antenatal drugs for each woman, and also provided stipends for the women at every visit to support their nutrition needs. The Foundation also provided a pulse oximeter to test for anemia, attracting women because it was non-invasive. About a year into the program, the Foundation renovated the center and equipped it with modern facilities.

“The first week we started the programme there were 20 women. In the next two weeks we had grown to 60 women.” The anemia programme ran through the Primary Health Centre for almost one year. In that year, 360 pregnant women registered for antenatal care at the facility. The Foundation posted a staff member to the facility to handle the stipend payments.

However, the GEANCO team increasingly had concerns about the programme. A grave concern was that of the 360 women that registered, only 80 deliveries happened at the facility. The other deliveries were handled by TBAs. Another concerned accountability and transparency of the health center, Chukwuka said, primarily in relation to the funds they were providing for the women’s medicines.

“When the program at the center failed, we thought, ‘Well, our target are the women, and we can’t just leave them’,” Chukwuka says, “so we reached out to the TBA who had left the center, and we decided to continue the anemia program there.” This decision opened the GEANCO team to a completely unexpected modus operandi—training TBAs to provide quality care to pregnant women. Today they have trained 115 TBAs in Enugu State and 100 TBAs in Anambra State.

The birth of the Julia Burke Maternity Centre
During the TBA training, the poor hygiene conditions at some of the TBAs gave birth to the idea of a modular clinic. “There was a TBA who had one of the worst facilities we had seen. We wanted to change the narrative; we wanted to start with one person,” Chukwuka said.

The TBA is Mrs. Anthonia Uzoigwe, fondly called Mama Ebube by her clients. By the end of 2020, the GEANCO Foundation had built their first modular maternity clinic. It was named the Julia Burke Maternity Centre, after the Julia Burke Foundation, GEANCO’s funding partner for the center. The center is built in Enugu’s Coal Camp, on land leased by the TBA with the support of the Foundation.

The modular clinic features an examination room, a delivery room, and a ward with two bed spaces, all ingeniously fitted into a shipping container with a solar panel system powering the facility and a solar fridge. The center has a router, a phone and a headset to enable the skilled health partner to conduct telemedicine visits. The center is impeccably clean, with a fitted canopy in front for women to sit and wait. It feels wholesome and welcoming.

The center was officially opened in December 2020, and to date 202 pregnant women have registered there and they have had 63 deliveries at the facility, with three referrals and no deaths, according to the GEANCO Foundation. “We wanted to see how this would work,” Chukwuka says, “and it is working; the partnership with skilled counterparts, data collection and management, the level of hygiene has improved remarkably. Even the pregnant women are testifying.”

The team opened a second modular clinic for the TBA who was the catalyst for the initial shift in the anemia control program, at Obinagu-Nike, naming it after GEANCO Foundation Co-Founder and Board Chairman, Dr. Godwin Onyema. The Godwin Onyema Maternity Centre was opened on March 17, 2021. Chukwuka says there are plans to open three more centers in 2021, with hopes to expand to Ebonyi and Anambra states.

The project has trained a total of 215 TBAs in two states, but there are presently only two existing and three planned modular clinics. TBAs have to meet GEANCO’s standards for compliance. These include having a clean facility, sterilization of implements, knowing when to refer, and being able to do the basics in terms of recording their clients’ information. Given the number of TBAs that are active in the network, one concern is whether GEANCO plans to provide the same type of modular centers that these first TBAs are getting, or whether it will adapt its strategy as the numbers of TBAs who reach the required level of compliance increases.

With over 61 percent of women in Nigeria still opting to give birth outside the health facilities, the challenge of getting quality care to women during pregnancy still remains. Chukwuka acknowledges that there is still a journey ahead, but right now, she is excited at the progress that she sees at the two modular maternity centers. “We’ve been able to achieve this integration between the TBAs and the skilled counterparts,” she says. “It doesn’t really matter who does what, as long as there is a better maternal outcome… and that is what we are achieving now.” 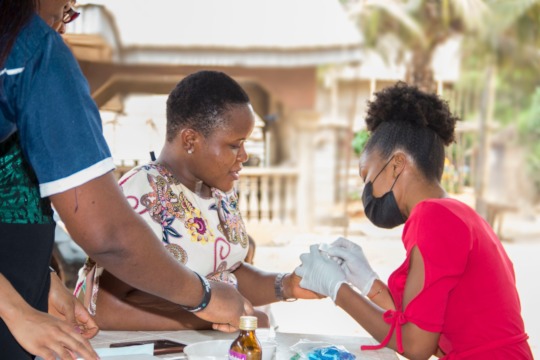 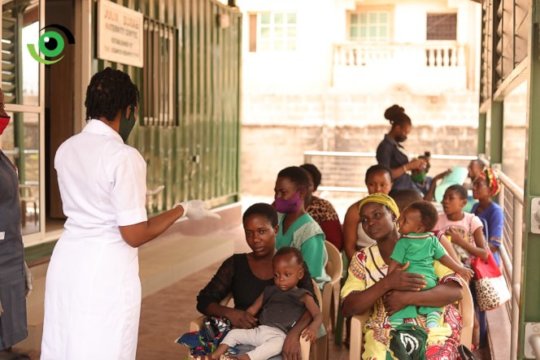 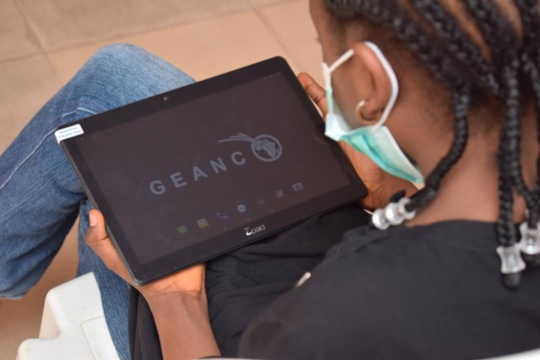 We currently have 34 scholarship recipients at 4 schools - Brightland Academy in southeast Nigeria, Foundations Academy in northern Nigeria, Anglican Girls Grammer School in the capital of Abuja, and Fruitful Vines in southwest Nigeria. The girls are all back in school learning in person after COVID-19 restrictions were lifted. They are doing well and enjoying being back with their classmates and teachers.

When the pandemic hit Nigeria last year, we donated tablets loaded with e-books and educational software to help our scholarship recipients and their classmates continue learning.  Since that time, the tablets have been integrated into the academic programs at our partner schools.  Students continue to read and learn at a higher level than before the pandemic.  We donated 220 tablets in 2020, and this past March, we donated another 110 tablets to worthy students at our partner schools. 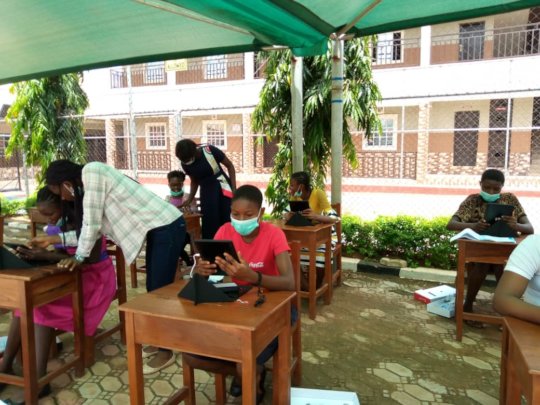 1 2 3 4 5 6 7 8 9 ... 11 ›
WARNING: Javascript is currently disabled or is not available in your browser. GlobalGiving makes extensive use of Javascript and will not function properly with Javascript disabled. Please enable Javascript and refresh this page.