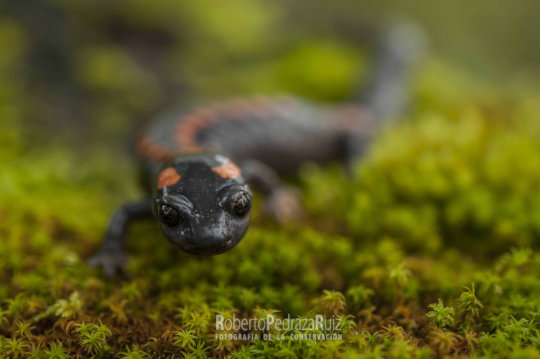 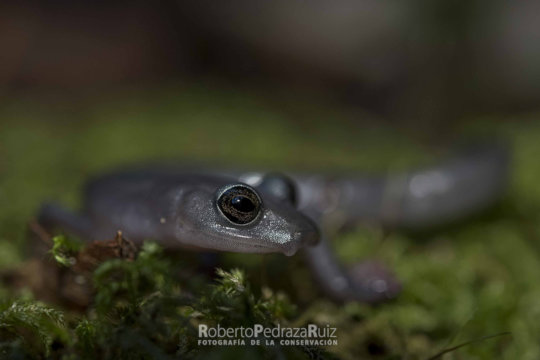 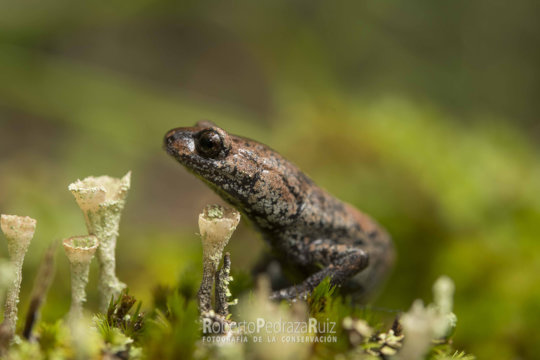 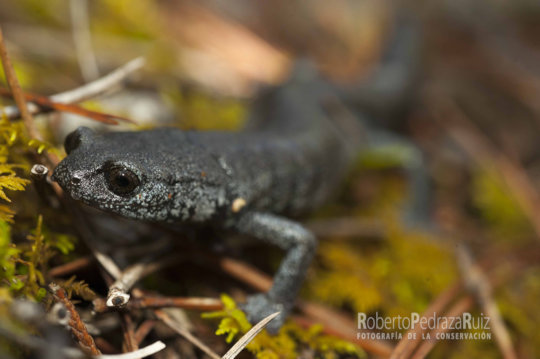 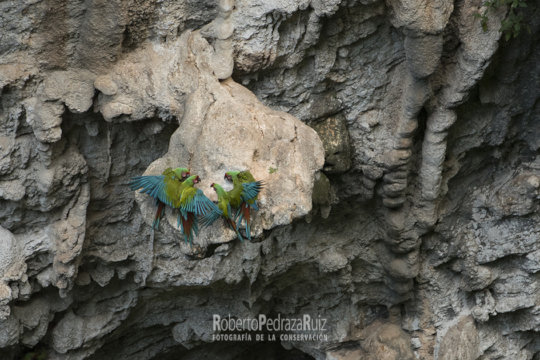 Two pairs of military macaws vying for a perch

Protection status: The military macaw´s population has been decreasing over the past fifty years due to habitat loss and capture for sale as pets. Classified as Endangered by SEMARNAT (Mexico´s Secretariat of the Environment and Natural Resources) and listed as Vulnerable in IUCN´s Red List of Threatened Species, its global population is estimated to be only between 3,000 – 10,000 individuals, with approximately 1,000 – 2,000 breeding pairs. (1)

A single colony of 80 birds survives in the Sierra Gorda. Although the macaws used to be plentiful throughout the reserve, they now occupy just two nesting sites: Sótano del Barro and Cañón del Infiernillo. They rest and nest in these two sites, leaving to feed in neighboring areas. Even here they suffer from increasing pressure from tourism and habitat transformation.

Habitats and Habits: The macaws depend on the temperate forests and tropical deciduous forests in the region, where they feed on a variety of fruits, including acorns, fruits of paradise, and nuts which they break open with their strong peaks.

Military macaws mate for life. This means that if one of the pair is killed or captured, the other will never mate again. This significantly reduces the species’ ability to restore its population. There are currently approximately 1,000 – 2,000 estimated breeding pairs of military macaws in the world.

Our Conservation Actions in the Sierra Gorda: By managing parts of the Sierra Gorda Biosphere Reserve as sites for strict conservation, Grupo Ecológico Sierra Gorda ensures safe feeding sites for military macaws. We continually educate local communities and tourism organizations about the macaws and regulate pressure on their nesting sites. Finally, we provide landowners with payments for ecosystem services in areas where the macaws feed, thus ensuring forest conservation.

The global population of military macaws is at risk. Please support us financially and help us to conserve their habitat. 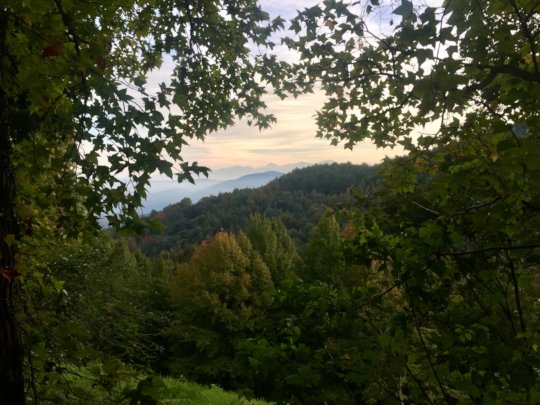 The Sierra Gorda Biosphere Reserve is a verdant refuge in the heart of Mexico and a vital habitat for the wildlife kingdom where the jaguar reigns. It is also home to many rural communities and towns that harbor a rich and unique cultural heritage.

Grupo Ecológico Sierra Gorda is the steward of this sacred redoubt. With hundreds of daily activities and several strategic lines of action, we strive to preserve its forests and develop opportunities for its communities.

Rural women employing other women in their roadside restaurants, setting a higher bar for sustainable tourism; local youth groups learning leadership skills in order to make decisions in community; school principals and mayors creating sustainable solutions for solid waste management; regenerative agricultural and livestock planning; participative forest and watershed management; expanding capacities and tools to make progress from the ground-up: This is what Sierra Gorda is about.

This year, we began a process of replicating our most innovative and successful initiatives. We are allying with the governments of Chihuahua, Baja California Sur, and Nuevo León to replicate Querétaro’s Carbon Offsetting Mechanism. Our environmental education program is being replicated in Coahuila. Finally, our holistic and regenerative soil management programs are expanding in Chihuahua, Guanajuato, and San Luis Potosí.

Other notable achievements include: 5,956 children in 87 schools benefiting from environmental education; 114,000 hectares under regenerative soil management in Querétaro, Chihuahua, Guanajuato, and San Luis Potosí; the first sighting of a black bear in one of the 7,000 hectares under strict conservation; 34 million Mexican pesos entering local communities; and 61 community workshops held this year for 319 farmers and gardeners.

When we work together, we can move mountains to educate, influence, and make conservation a reality. We need your help to continue growing this grassroots movement and achieve our goal of re-greening Mexico. This year, help us potentiate every possible social, economic, and political opportunity by donating to one of the campaigns listed below. By giving, you will build resilience and better livelihoods, hope and joy for communities and for Nature.