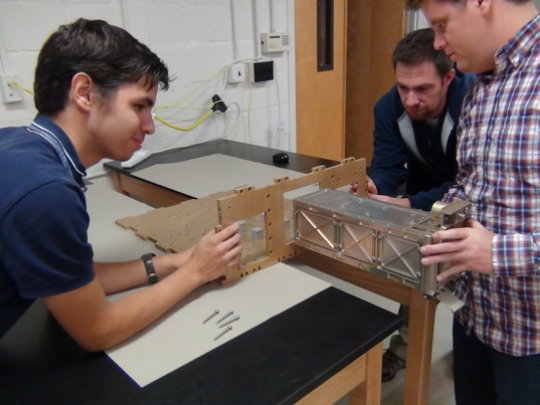 Last week, hardware for the Prox-1 and LightSail programs came together for the very first time.At Georgia Tech in Atlanta, Cal Poly San Luis Obispo engineers loaded a P-POD replica into the partially assembled frame of the Prox-1 spacecraft. The meetup was a fit check to make sure the two pieces of hardware fit together as designed.

A P-POD, or Poly Picosatellite Orbital Deployer, is a spring-loaded container slightly bigger than a three-unit CubeSat, which measures 10 by 10 by 30 centimeters. When LightSail is ready for flight, it will slide snugly into a P-POD, and the P-POD will be installed in Prox-1.

On Oct. 20, Cal Poly engineers and Georgia Tech students successfully installed a model P-POD into the Prox-1 chassis, which has been partially constructed. “It fit beautifully,” said Dave Spencer, Prox-1 principal investigator and mission manager for the LightSail-B mission.

LightSail and Prox-1 will launch to a circular, 720-kilometer orbit aboard a SpaceX Falcon Heavy. Liftoff is currently scheduled for Sept. 15, 2016. After completing an initial checkout, Prox-1 will release LightSail by opening the spacecraft's P-POD door. The pod’s coiled spring will push LightSail into open space. Later, Prox-1 will track LightSail and rendezvous with the CubeSat using visual and thermal imagery, ultimately watching as LightSail deploys its 32-square-meter solar sails. 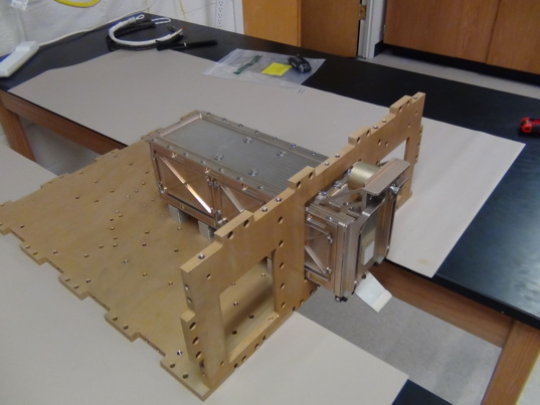 How do we ascertain the threat level of an NEO? 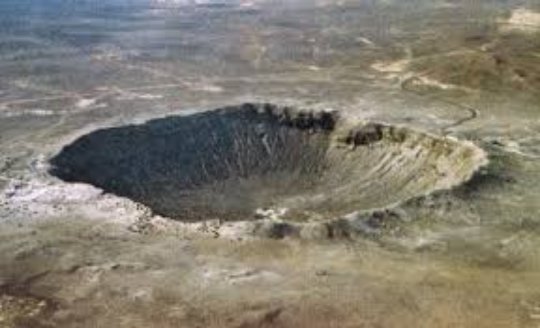 The Planetary Society established the Gene Shoemaker Near Earth Object grant program in 1997. Grants are awarded to amateur observers, observers in developing countries and underfunded professional astronomers.  This allows more eyes on the sky that will increase contributions to Near Earth Object research.  Have you ever wondered how these objects are assessed?  How on earth – or in this case, in space - do you categorize them?

The Torino Scale is one method used for categorizing the impact hazard associated with near-Earth objects and is intended as a communication tool for astronomers and the public to determine the seriousness of collision predictions, by combining probability statistics and known kinetic damage potentials into a single threat value.

The Torino Scale uses an integer scale from 0 to 10. A 0 indicates an object has a negligibly small chance of collision with the Earth, compared with the usual "background noise" of collision events, or is too small to penetrate Earth's atmosphere intact. A 10 indicates that a collision is certain, and the impacting object is large enough to precipitate a global disaster.

An object is assigned a 0 to 10 value based on its collision probability and the kinetic energy (expressed in megatons of TNT) of the possible collision.

The Torino Scale also uses a color code scale: white, green, yellow, orange and red. Each color code has a meaning as indicated on the scale shown below.

No object has ever been rated above level 4, and currently all objects are rated level 0.

The Chicxulub impact, which many believe was a significant factor in the extinction of the dinosaurs, has been estimated at 100 million megatons, or Torino Scale 10.  Both the Barringer Crater in Arizona and the Tunguska event of 1908 are estimated to be in the 3-10 megaton range.  2013’s Chelyabinsk meteor in Russia was 0.4 megatons, a 0 on the Torino Scale.

Your contributions to planetary defense fund our Shoemaker NEO grant program, allowing our researchers to do critical work – defining NEO orbits to tell whether they are on a collision course with Earth and continuing to discover new NEOs.  With your continued support, this important work can further our knowledge of, and defense from, potentially hazardous near earth objects. 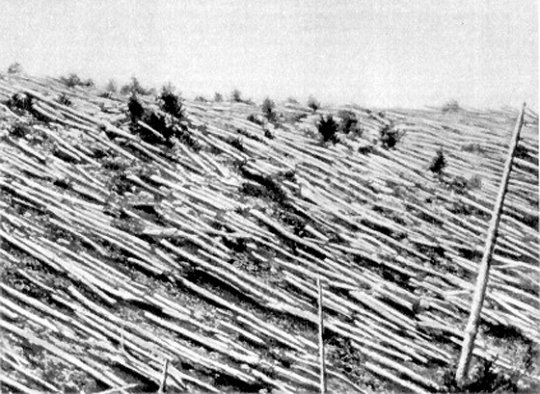 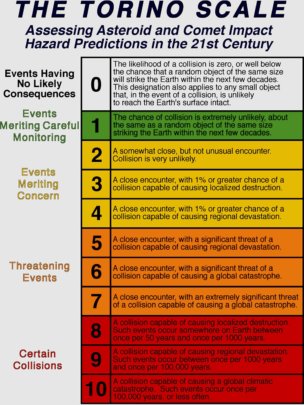 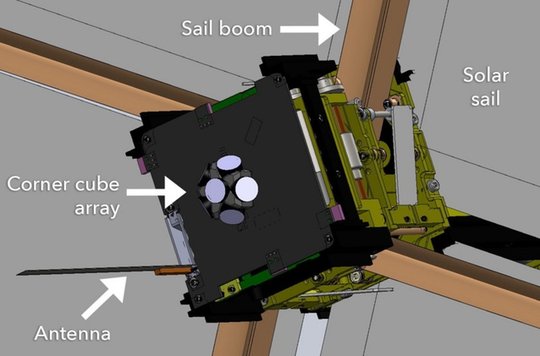 In 1969, Neil Armstrong and Buzz Aldrin stepped onto the lunar surface, into the history books and then set out to do some science. Among the experiments they deployed on the moon was the Laser Ranging Reflector, a toolbox-sized array of small mirrors. LRRs were also deployed during Apollo 14 and 15, and for decades, scientists on Earth have beamed lasers at these mirrors and measured how long it takes for the reflection to come back. The activity, likened to shooting a moving dime with a rifle from three kilometers, refined the distance between Earth and the moon to a staggeringly tiny three-centimeter margin of error.

When LightSail launches into space next year, a similar technique will be used to measure how the spacecraft’s orbit changes over time. It’s a job best fit for lasers and corner cubes, the same, segmented, concave mirrors that were left on the moon. If we’re going to tell the world the gentle push of sunlight raised our orbit by a few dozen kilometers in just two months, we need extremely accurate measurements.

LightSail already has a few corner cubes, but they're in hard-to-zap places; during the test mission, no laser ranging attempt were successful.  For the second flight, new corner cubes have to be installed.  But with real estate on a 10-by-10-by-30 centimeter spacefract at a premium, where do you fit new hardware?

On the outside of the spacecraft.

Surprisingly, this extension to the spacecraft's exterior still complies with CubeSat standard.  LightSail rides to space inside a Poly-Picosatellite Orbital Deployer, or P-POD.  The P-POD, in turn, is bolted into LightSail's partner spacecraft, Prox-1.  The P-POD's spring - roughly the size of a coiled Slinky - pushes LightSail into space when the pod's door opens.

Although P-POD sizes dictate CubeSat dimensions, the cylindrical space inside the pod's coiled spring is open and available.  The use of htis space was pioneered by other CubeSat groups, and is now a part of Cal Poly's CubeSat standards.  LightSail's new corner cube array will be the latest piece of hardware to take advantage of this extra P-POD storage, fitting snugly within the coiled spring for deployment.

To install the corner cube array, Ecliptic plans to replace LightSail'ls two aft solar panels with an aluminum plate.  This is not expected to have a major impact on the spacecraft's power budget.  In LightSail's cube configuration, the spacecraft has 26 additional solar panels.  In the sails-out position, up to 50 will still be available - and when LightSail is pointed at the sun, the aft panels are blocked by the solar sail anyway.  An initial prototype of the array has already been completed.  Ecliptic engineers plan to verify the design, confirm the expected impact to the power budget and then remove the aft solar panel to begin implementation.

We are very excited about this new development, and The Planetary Society would not be able to tell you about it without your generous and ongoing support for LightSail.  We are grateful to our members and supporters. The next LightSail mission will give us the opportunity for true solar sailing!  Onward!