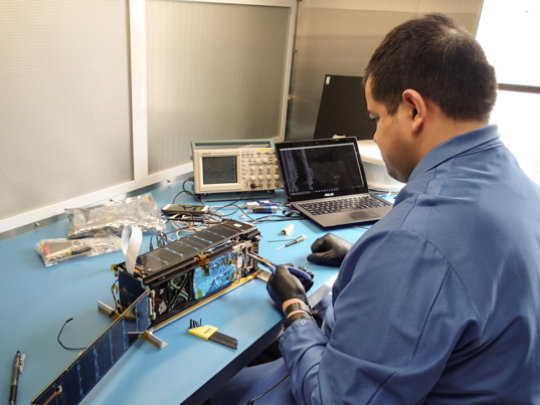 It's been a busy two months of testing for The Planetary Society's LightSail 2 spacecraft.

Engineers spun the CubeSat like a record and shined flashlights in its electronic eyes in order to make sure everything goes according to plan when the solar sail heads into space. More trials are on the horizon, including a trip to a special magnetic cage at Utah State University's Space Dynamics Laboratory.

Most of those tests were relatively straightforward: Does the momentum wheel spin at the commanded rate? Do the gyroscopes record the correct orientation of the spacecraft? Are the sun sensors able to track a light source?

But now, an even bigger challenge awaits. In order for LightSail to raise its orbit by a kilometer each day, the spacecraft must "tack" its solar sails broadside against the sun's rays for half of each orbit. During the other half, LightSail must be rotated 90 degrees to face the solar photons edge-on.

LightSail orients itself using an attitude control system, which consists of magnetometers, torque rods and a momentum wheel.

The magnetometers read the direction and strength of Earth's natural magnetic field as the spacecraft zips around the planet. The torque rods are three, golden cylinders (one each for the X, Y and Z axes) that electrically charge to generate a magnetic field, torquing against Earth's field to rotate the spacecraft. And the momentum wheel turns the spacecraft on a single axis (many spacecraft have three of these—one per axis).

So, in order to solar sail, we first stabilize the spacecraft using the torque rods. Then, the momentum wheel, which has more muscle, gives us the 90-degree swings into and out of the sun's rays each orbit.

But how do we make sure that's all going to work?

In early May, LightSail will travel to Utah State University's Space Dynamics Laboratory. There, the CubeSat will be placed into a Helmholtz cage (named after a German physicist).

It's difficult to calibrate a magnetometer on Earth because we are constantly being bombarded by magnetic interference from electronic devices. LightSail's own electronics, contribute to these distortions. A Helmholtz cage creates its own magnetic field, isolating its contents from outside interference. That means the team can simulate the same magnetic field profiles LightSail will see in orbit.

Ecliptic's Alex Diaz, as well as Barbara Plante of Boreal Space, will oversee the Utah trials. There are three main tests: First, Diaz and Plante will see if LightSail's magnetometers correctly read the fields generated by the Helmholtz cage. Next, they'll put LightSail on an air bearing—basically, a floating platform suspended by jets of air. The Helmholtz cage will generate a magnetic field, and LightSail will use its torque rods to swivel the way it will in space. Finally, Diaz and Plante will test LightSail's momentum wheel, commanding the spacecraft to make its 90-degree tacking maneuvers.

If all goes well, the tests shouldn't last more than a few days, paving the way for a day-in-the-life test back at Cal Poly San Luis Obispo, where the solar sails will be deployed for the last time before launch.

The 2015 Shoemaker NEO Grant winners have all gotten their hardware set up using their grants to improve their asteroid observing capabilities.  The six winners spread across 3 countries on 3 continents are amateurs with amazing telescope systems.  They focus mostly on tracking near Earth asteroids, and characterizing them, following up on discoveries made by the larger professional surveys, so that we know what the asteroids’ orbits are and whether they are dangerous, and what the nature of the asteroids are, for example if what looked like one asteroid is actually a binary pair.

We have also begun to gear up for another round of grants.  The call for proposals will come out this fall.  We are excited to announce that Dr. Timothy Spahr has once again agreed to serve as the Shoemaker NEO Coordinator.  Tim, a long time asteroid scientist and former Director of the Minor Planet Center which is responsible for organizing the asteroid observations from around the world, helps guarantee that we are making the most impact for the money available.  He also will head the review panel of professionals who will recommend the proposals for funding.

Our Director of Science and Technology, Dr. Bruce Betts, has been asked to once again serve on the organizing committee for the Planetary Defense Conference (PDC).  The PDC is held every 2 years and brings together the world’s experts on all aspects of planetary defense, from observers, to those developing techniques to move dangerous asteroids when they are discovered, all the way to disaster management experts starting to thinks about how evacuations or disaster relief might be handled in the event of an impact. 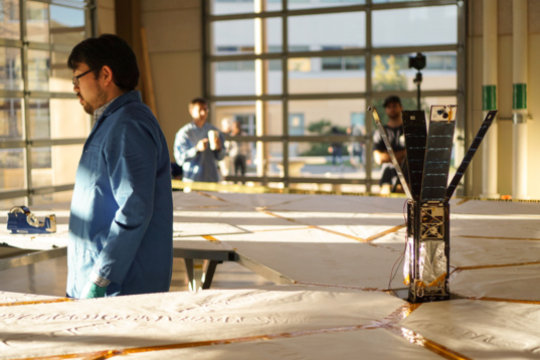 The Planetary Society's newest LightSail spacecraft successfully deployed its solar sails Thursday, wrapping up an initial round of system-level tests to prepare the CubeSat for flight.

On Thursday, January 28, a team of engineers at Cal Poly San Luis Obispo commanded the spacecraft to unfurl its 32-square-meter sails for the first time since the project was resurrected in 2014. The sails are pushed out of small storage cavities by four, tape measure-like booms that wind around a central motor spindle. Deployment tests take place on a low-friction table set up in a large engineering bay.

The sail deployment marks the end of the first round of system-level tests the spacecraft must complete prior to integration and delivery for launch. Last week, the team conducted mission simulations using the spacecraft's new flight software.

The test results will be carefully reviewed in preparation for a full day-in-the-life test in early March, during which another sail deployment will be conducted. LightSail is scheduled to be delivered to Georgia Tech for integration into the Prox-1 spacecraft later that month. The duo are manifested for a SpaceX Falcon Heavy flight in September 2016, pending launch vehicle readiness. 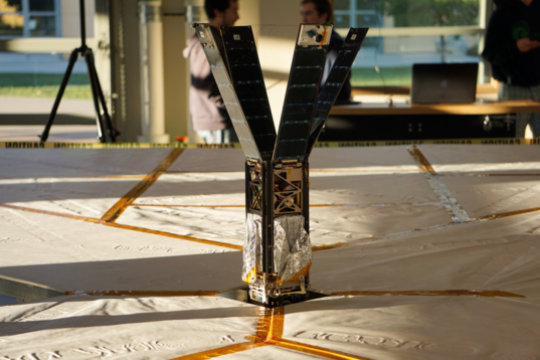 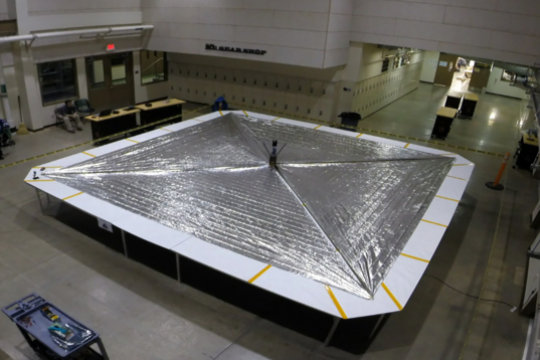 Solar sails fully deployed.
‹ 1 ... 4 5 6 7 8 9 10 11 12 ›
WARNING: Javascript is currently disabled or is not available in your browser. GlobalGiving makes extensive use of Javascript and will not function properly with Javascript disabled. Please enable Javascript and refresh this page.