LightSail Test Flight Scheduled for May 2015! 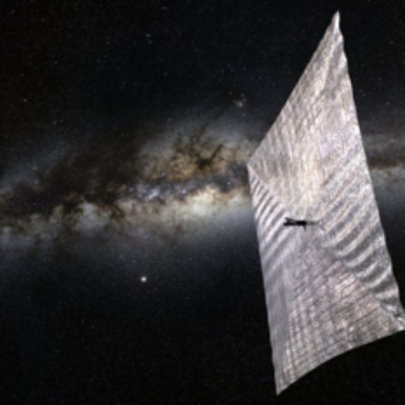 In June of 2005, the Russian ballistic missile Volna was launched toward space from a submarine in the Barents Sea.  Originally designed as a rocket of destruction, Volna was now carrying an instrument of peace:  the world's first solar sail, the Cosmos 1, financed entirely by private citizens.

The Planetary Society's spacecraft was to be the first object to rely solely on sunlight for propulsion.  But 83 seconds into the the flight, a turbopump inside the rocket shut down, and the engine fell silent.  The Volna coasted to a height of 75 kilometers and then tumbled back into the sea.

This May, we are trying again.  The first of two member-funded LightSail spacecraft will hitch a ride into space for a test flight aboard an Atlas V rocket.  The CubeSat - about the size of a loaf of bread - will spend about a month in orbit, communicating with the ground, deploying its solar sails and sending images back to Earth. This first LightSail spacecraft won't fly high enough to escape the Earth's atmospheric drag, but the shakedown cruise will test out the CubeSat's critical functions and pave the way for a full-fledged solar flight in 2016.  That flight will launch aboard SpaceX's new Falcon Heavy rocket.

LightSail completed its final qualification tests last December, and was cleared for flight by engineers at the California Polytechnic State University in San Luis Obispo, Calif.  Cal Poly provides the Poly-Picosatellite Orbital Deployer (P-POD) container that will spring the spacecraft from the Atlas V rocket.    This 2015 test flight is sponsored by NASA's Education Launch of NanoSatellites (ELaNa) program, which helps CubeSat providers find ride-sharing opportunities.  Atlas V's primary payload is classified, and will launch from the Cape Canaveral Air Force Station in Florida on May 6th.

The CubeSat will spend four weeks in a checkout phase to ensure it will have time to drift away from other spacecraft released during the flight and to secure reliable two-way communication with the ground.  Three electromagnetic torque rods on the spacecraft will interact with Earth's magnetic field, and fire at regular intervals to orient the spacecraft.  Then, after the checkout period, LightSail's four solar panels will open, revealing the inside of the tightly-packed CubeSat.  A motor will extend four tape measure-like booms and tug four triangular Mylar sails out of storage. Combined, the sails have an area of 32 square meters.

During thisfour-week checkout phase, the spacecraft's orbit will decay slightly.  However, once the sails are deployed, LightSail will be pulled back into the atmosphere.  Orbital models show the lifetime of the sail to be of just two to ten days.  While this first LightSail mission will be short, it will provide crucial data in preparation for the 2016 flight.  The 2016 flight will attempt true solar sailing, at a circular altitude of 720 kilometers.

LightSail is equipped with two inward-facing cameras that will provide 360-degree coverage of the sails and will swing outward just before sail deployment.  They will captures timelapse images of the deployment sequence and show how the large sail performs in a microgravity environment.

With the scheduled launch date of May 6th, 2015, sail deployment could occur in early June - just short of the 10-year Cosmos 1 anniversary.  Success in the this mission would be a watershed moment for The Planetary Society, now celebrating its 35th year as an organization.  But this first LightSail flight is still at test, and success is certainly not a guarantee.  After Cosmos 1 failed to reach orbit in 2005, the honor of the world's first solar sail went to Japan's IKAROS, a Venus-bound spacecraft launched in 2010.  Later that same year, NASA launched Nanosail-D, a technology demonstration CubeSat testing the viability of using solar sails to deorbit spacecraft.  Using private donations, Planetary Society co-founder Louis Friedman then led the charge to develop a more advanced version of Nanosail.

The project is now under the direction of Doug Stetson, the founder of the Space Science and Exploration Consulting Group.  The primary contractor for LightSail, Ecliptic Enterprises Corporation, is located in Pasadena, Calif. Ecliptic's flight system experience includes RocketCam, a family of onboard video systems used on rockets and spacecraft.

Both LightSail spacecraft are expected to be visible from the ground once their sails are deployed.  We are working on a dashboard to display ground tracks and telemetry data, giving citizens the world over the chance to catch a glimpse of our solar sails shimmering in the sunlight.