TN sadly lost one of its members, Aminata Ouédraogo, on Sunday 5th November following an illness. She specialised in crocheting recycled materials. The co-operative’s members are grieving this loss.

TN appealed to several ministries and NGOs with a view to find new public and private markets. We appealed to: CBM, OXFAM, SP/COMUD/HANDICAP and the Ministry for Women and National Solidarity for the Family.

We wrote to the General Director of Town planning, presenting them with a dossier which included our promotional documents. As such, we are still hoping to obtain a subsidised plot of land at a low cost.

We have requested a meeting with the Town Council of the 11th District to discuss our appeal for a plot of land with the Mayor.
Currently, we await the results of these appeals.

We received an order from UK Charity LAFI Burkina for approximately £1,050 worth of TN products. 80% of money from sales (£840) was divided between 17 craftsmen and women. The remaining 20% (£210) is being used to support TN’s operations.

We also received an order from Friends of Burkina Faso for their Peace Statue 2017. This cost them £170 of which £137 is for the craftsman and £34 for TN.

Unfortunately we suffered a big loss of corn- 11 sacs were ruined.

We made £61 profit on equipment hire (tents and chairs).

The result of these sales allowed us to pay some members and contributed towards the running of TN: electricity, rent, Internet, water etc.

The members of the Executive Committee and the Project Committee held several meetings in order to plan the above-mentioned activities and to consider the results.

£700 was raised through a car boot sale and a sponsored run in September for the Workshop fund. Alice will be talking at a Rotary District meeting on Wednesday in the hope of raising further funding.

Despite the difficult socio-economic situation in Burkina Faso, TN continues to fight relentlessly to contribute positively to the improvement of living conditions for its members, as well as for the sustainability of its structure.

Fundraising and sales activities from the UK 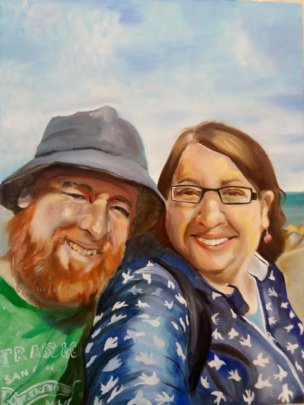 Rotary Club of Crowthorne and Sandhurst

On the 18th July I delivered a presentation about the construction project to the Rotary Club of Crowthorne and Sandhurst. It seemed to be well received and the Club was able to make a generous donation of £100. I am on the International Service Committee of this Club and am trying to promote a micro-finance project for some of TN’s members. I need to get back to them with concrete figures if anything is to be approved.

I have been in touch with members of the Rotary District Council including the District Governor and the Grants Chair who were both able to give some very helpful advice. A suggestion has been made that I present at the next quarterly District Council Meeting where over 30 clubs attend. Should this be possible, there is a potential for other clubs to make donations.

Four volunteers including myself are running a disability inclusive 10k race on the 3rd September to raise funds. We are doing this alongside UK charity LAFI (Lasting Action for Inclusion) Burkina. It should be a great day! So far we have raised about £300 thanks largely to the kindness of previous donors- thank you!

Another volunteer and I will be doing a car boot sale at the weekend in order to raise funding. Hopefully it will go well! If it does we will do another one the weekend after.

Since July I have raised about £250 from art commissions. I know that this doesn’t seem like much but every little helps and what makes me happy is that all of this money is going to TN.

Myself and hopefully other members from the Rotary Club of Crowthorne and Sandhurst will be attending Grant Workshops in November. I have explored the possibility of applying for a Global Grant through the Rotary Club of Crowthorne and Sandhurst. From what I understand the whole club has to be on board and this year the President has chosen to focus on a small project, possibly helping to provide resources for a nursery school in Zimbabwe - a very important cause. However, the club seems keen to help to promote TN’s art and craft works within Rotary and potentially support the construction project in future years.

I wrote to the Gallery of African Art in Mayfair and sent them images of Issouf's bronzework. I then visited the gallery and spoke to the owner. I explained that the beautiful work TN creates is made in the toughest of conditions by some amazingly resilient artists. This to me could be an example of 'provenance' which determines the worth of artwork. For those reasons I hope for it to sell as art work and not merely relegated to the domain of African crafts in the future. While the gallery owner didn't want to purchase anything she gave some good advice: to participate in more art fairs/ markets and told me to continue sending images relevant work.

I participated in an Art Fair in June where I was able to exhibit and sell TN’s work. £55 was made on TN sales which was fantastic. Awareness was also raised locally about the project. More recently £43 worth of sales were made at my local Rotary Club and at a Global Giving gathering I sold £35 worth of jewellery. All of this money goes back to TN via Western Union where 80% of revenue goes to the maker and 20% goes back into the co-operative. A few sales have also been made online. 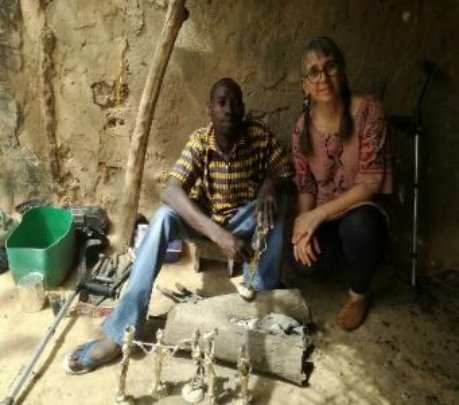 1) Monitoring and Evaluation of Microprojects

Three members of TN benefited from micro projects at the end of 2015 set up by the ONG Fauteuils Roulants au Sud (Wheelchairs in the South formerly Handicap Solidaire Suisse). Two members of TN accompanied Madeleine Meroz, the person in charge of evaluating these projects, to visit the beneficiaries. She was happy with the results.

On the 8th of April TN called an EGM to inform its members of its activities and to renew the office membership. Over half of current members were present. The meeting was chaired by a council member of the National Federation of Artisans of Burkina Faso.

Present members at the meeting appreciated positively the activities led by TN.

The status of TN and its rules and regulations were formally approved.

We are still waiting for the decision of the state regarding the purchase of our plot of land.

TN sent a partnership request to the Burkinabé  Association of Fundraising.

The first aim of a human being is to be in good health before embarking on  any activity. The health of all members of TN is very important which is why TN wants to lead activities in the fight against HIV and AIDS and other STIs in order to achieve TN’s goals.

The project focuses on 3 main areas but TN will intervene in areas 1 and 3 which are:

3. Governance, financing of the response and management of strategic information on HIV/ AIDS and STIs. The total budget for this project is 4 393 200 CFA / £5758

We have our fingers crossed that it will work.

We are collaborating on a project with an organisation in the UK to help sell our crafts.

We have fulfilled two orders for the catering service: one for the Burkinabé Association of Fundraising serving 8 people totalling 24 000 F CFA/ £31 with a profit of 7000 F CFA/ £9.

7 Hiring out of equipment

We created 12 leaflets publicising the various services we offer and we delivered them to different ministries and NGOs.

Overall sales are insufficient. After having paid the members for sales and services, profits are put towards the running of the organisation.

Despite poor revenue overall, some members testify to the positive impact that TN has for them.

Rasmata has been able to pay for her daughter Rachidatou ’s school fees this year.

The three beneficiaries of micro projects, including bronze craftsman Issouf, testify that with the micro projects their smallholdings are prospering as well as their craft activities. They are able to support their own needs and those of their families.

Overall, the activities carried out have had a positive impact on TN.

We thank everyone: the members, the partners, the donors, our clients, our ex team leaders, the neighbours of TN, all of whom have contributed to the benefit of Tigoung Nonma. 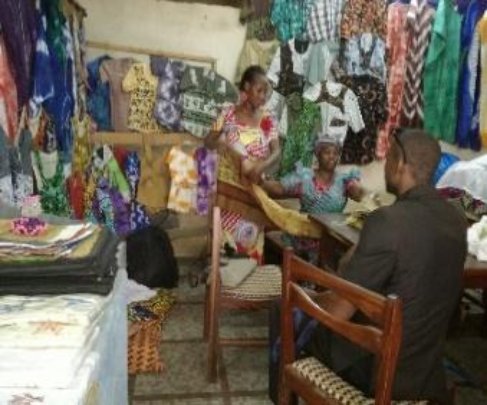 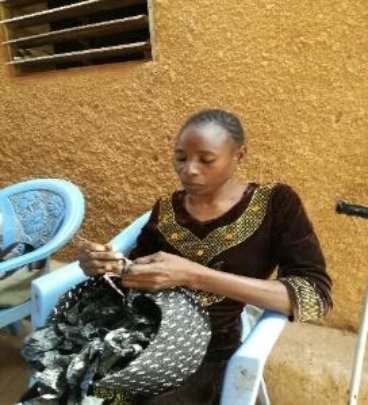