Bill Brower is a Field Program Officer with GlobalGiving who is visiting our partners’ projects throughout South and Southeast Asia. On March 5th he met with Joseph Rosal of the De la Salle University Center for Social Concern and Action and Noli Abinales of their implementing partner, Buklod Tao, in the COSCA office in Manila. His “Postcard” from the visit:

COSCA has already reported on their initial response to last year’s Typhoon Ondoy; in speaking with them and seeing pictures, it does appear that money from GlobalGiving’s generous donors was able to help many people in the chaotic days and weeks following the storm with emergency supplies and medical teams. There is still some money left and I was happy to hear that it will be going to disaster risk reduction—replicating in other communities the success Buklod Tao has had in San Mateo. Too often disaster response is limited to what can be done ex post facto, missing the most effective way to save lives: being prepared before the worst hits.

Noli Abinales and others started Buklod Tao in 1997 as a community-based disaster management team. They trained rescue teams, fabricated rescue boats and developed an early warning system. Since then there have been no casualties in their community, unlike in neighboring communities. Their primary initiative these days is “on-site relocation”—building higher, safer homes in the communities where vulnerable families live. They have also been putting up embankment walls, some with the help of DLSU students, to help prevent flooding. I’m happy that GlobalGiving money will allow COSCA and Buklod Tao to expand these life-saving initiatives to other communities, long after much of the world’s attention has moved on to Haiti, Chile, China… 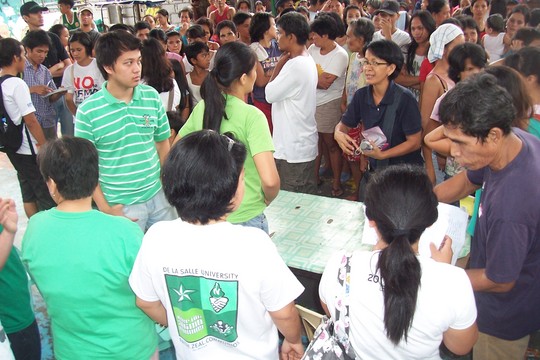 The harsh aftermath of typhoon Ondoy continues to challenge the country’s disaster management response. Ondoy brought so much rain inundating some areas in the Metropolitan Manila and nearby provinces (Rizal, Laguna & Bulacan). The disaster also surprised other places experiencing flood for the first time. It also made other places inaccessible because of the high water level.

As of October 8, 2009, the National Disaster Coordinating Council (NDCC) has pegged the total damage caused by Ondoy to have reached PhP 9.7 billion. Lives were also lost. According to NDCC, a total of 298 people were killed, 5 injured and 39 missing. The NDCC also claimed that about 829,498 families or 4 million people have been affected by the disaster. Of this, more than 100,000 families are still requesting for assistance.

On September 28, two days after the devastating typhoon wrought havoc to the lives of many Filipinos, the De La Salle University Manila (DLSU-M) started its relief operation for the victims of Ondoy. Dubbed as SAGIP METRO: DLSU-Manila’s Relief Drive, it primarily aims to collect and distribute relief goods to communities that were hardly-hit by the calamity. The project was spearheaded by the university’s Center for Social Concern & Action (COSCA), the Student Council (SC) and the Office of the President/Chancellor.

The project is not only an effort to assist the victims of Ondoy, it has also been an opportunity for Lasallians to rekindle the spirit of damayan in time of disaster. Students, faculty members, staff, parents, alumni have shown their support for the relief drive by serving as volunteers, donating goods and money, offering vehicles for the relief distribution, asking network and partner organizations for donations and reporting situations of other Lasallians who need special assistance/intervention.

During the first day of the relief drive, more than 400 volunteers showed up and assisted in soliciting donations, packing and distributing goods to identified communities. Some students and faculty volunteers even went to malls near the university to solicit goods for the relief operation. In the succeeding days of the operation, the project team had to organize at least two shifts to accommodate the increasing number of volunteers. Donations also poured in as other members of the academic community helped in disseminating the information about the university-led relief drive.

By the end of the first wave of relief operation, 11,616 bags of food, toiletries, clothing, water, and medicine were given away to 29 communities across 14 cities and provinces. The distribution of relief goods was in coordination with 22 partner community-based organizations, church institutions, local government units, civil society formations and other organized groups.

To make the relief drive organized and systematic, the project team put up a structure and mechanisms for operation. Sagip Metro has assigned an over-all coordinator to harmonize the activities of the identified committees. The five major committees include: a) Donations; b) Deployment & Distribution; c) Mobilization of Volunteers; d) Documentation, and e) Dissemination of Information.

The Donations Committee receives the donations (both in kind and in cash), makes the necessary inventory of the received donations and donors, sorts out and packs the received items for distribution.

The second committee, Deployment & Distribution, identifies and prioritizes the target beneficiaries and facilitates the deployment and actual distribution of the relief goods. This committee also makes sure that there is at least one organized group in the identified communities. The organization should have a system of distributing the donated items.

As the name already implies, the third committee deals with concerns related to effective and efficient way of mobilizing volunteers. It assigns volunteers to a particular task. The committee also gives pre and post-activity orientation/de-briefing for volunteers (e.g. deployment, packing etc.). Meanwhile, the Dissemination of Information Committee is responsible for sending out official announcement and correspondence to DLSU institutional partners and to the public in general.

Lastly, the Documentation Committee is in-charge of consolidating all the reports of other committees (e.g. list of members of DLSU community - students, faculty, staff etc. - and partner communities that have been badly hit by Ondoy). It is also tasked to organize the information on the situation of the affected Lasallians and partner communities as well as their immediate needs. It gives update to the Information Dissemination committee so the latter can come up with regular announcements/updates.

Aside from the structure and ad hoc committees, the team also came up with a set of criteria for selecting and prioritizing target beneficiaries of the relief goods. The criteria are as follows: a) partner communities/members of DLSU community as priorities; b) urgency of needed intervention; c) extent of damage to community; d) extent of assistance needed; e) extent of assistance already received (from NGOs, GOs, Church groups etc.); f) existence of organized & credible group to lead identification & distribution (based on information from coordination efforts, news etc.).

After four days of relief operation (September 28 to October 01), the project team decided to temporarily cease relief goods packing and deployment activities due to impending danger posed by tropical storm Pepeng. The second phase of relief project resumed last October 05 (Monday) and will end on Saturday (October 10). Acceptance of in kind donations is until October 09 only. However, cash donation will continue since the money can be used for the next level of institutional intervention – rehabilitation of affected communities.

‹ 1 ... 26 27 28 29 30 31 32 33 34
WARNING: Javascript is currently disabled or is not available in your browser. GlobalGiving makes extensive use of Javascript and will not function properly with Javascript disabled. Please enable Javascript and refresh this page.