We’ve just welcomed the latest cohort of Dreamers under the theme “Creative Freedom of Expression.” With two trainings, two Dream Machines, a cultural event, and project activities already underway, a lot has happened so far. Our 18 new Dreamers are looking to make a big splash.

This past reporting period we conducted two Dream Machine sessions at Malawi College of Health Science (MCHS) and Chancellor College (CC). The Dream Machine is an interactive session that helps potential Dreamers explore different ideas and come up with project ideas that they could apply to the programme with. We had 72 students attend the Dream Machines, who explored the theme of this round of SWD, creative freedom of expression

The 18 Dreamers are working on six new projects; two teams are from Malawi College of Health Science, Tiunikirane and Kwawala, and four teams are from Chancellor Collage, Mawu Athu, Pamchenge, Baller Kunthanzi, and Sketch Ahead. For more information about the projects and the new leaders, check out their profiles on our website https://www.aghcafrica.org/our-stories/2018/10/31/meet-the-newest-dreamers

We also held our orientation for this year’s Dreamers at Chilema Ecumenical Training Centre. Over the course of two days, the Dreamers were trained on the fundamental skills they would need to successfully carry out their projects such as communication, financial management, monitoring and evaluation, and project management. They fleshed out their projects and were equipped to begin carrying out their projects by the end of the second day. We are proud and eager to see what they do with their projects.

We also held our second training. This was carried out with the aim of instilling more creativity in the projects. Over the course of the day, the teams developed their direction and learned how to best incorporate the arts in their implementation. First was a series of interactive sessions, where the concepts of creativity and innovation were explored, which was then incorporated into their projects. Second was the introduction of different artists from a range of artistic fields, such as music, poetry, dance, drawing, and pictures. The artists gave advice to the Dreamers and helped them see how to use the lessons they learned.

With all this done, it’s full speed ahead to continue the momentum as we approach the end of the year. With trainings, project interventions, and more art to come, we look forward the next few months. 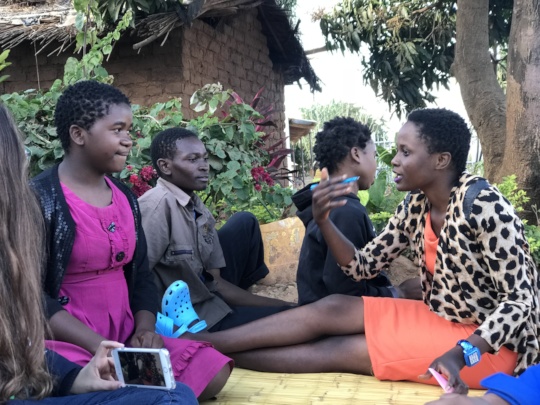 The 2017-18 Dreamer cohort made a huge impact The 2017-18 Students with Dreams cohort was an interesting year. Here are some of the exciting projects that came from the latest cohort, as well as some partners and activities that made it all possible.

The latest group of 35 Dreamers conducted 12 different projects, impacting 1020 people from across the Zomba district, including 427 men and 593 women.

The Dreamers said they gained a strong sense of responsibility because this unique programme put them in charge and allowed them to focus on what would best impact those in need. The also said that because they are able to lead and implement projects in the community, they feel valued and trusted. Other feedback shows the trainings and mentorship really work hand-in-hand to equip the Dreamers with confidence, knowing they can overcome barriers they might face. As one Dreamer also put it, the programme also allows for more practical experience that is helpful in building a resume for applying for jobs since most employers would rather have someone who has worked in a more practical nature before.

We were excited to host volunteers from Georgia State University, World University Canada, and Seattle University this summer, who have been helping strengthen the Students with Dreams programme. We're so grateful for all of the help Patricia, Danielle, Kaleb, Sam, and Emi have provided through monitoring and evaluation, fundraising and curriculum development.

Through the Segal Family Foundation grantee network, we met with an organisation called Ashoka. They, in collaboration with British Council, hosted the Impact Africa Summit. The Summit aimed to create a platform for discussion on the state and nature of leadership and the ecosystem in Africa around social entrepreneurship.

One of our Dreamers, Tawonga from Pamthunzi, was selected as a change maker and presented Pamthunzi at the Summit. Pamthunzi means “under the shade” and refers to the traditional place where communities gather to discuss and resolve issues. Taking cue from this traditional practice, the project gathers youth from schools in rural parts of Zomba to discuss various social issues that are affecting them and create solutions together. Tawonga has also been selected for Young African Leaders Initiative (YALI) training. The Young African Leaders Initiative (YALI) is an initiative of the United States Department of State and was begun in 2010. YALI aims at educating and networking young African leaders with activities including a fellowship to study in the United States for six weeks, follow-up resources, and student exchange programs. We’re very excited about the direction that Pamthunziis going to take.

Our next cohort of Dreamers will start soon and all of their projects will fall under the theme Creative Freedom of Expression, as part of a partnership with HIVOS. We’ll be working with the Dreamers using interactive activities, such as creating posters and performing skits. We’re very excited to use creative arts activities to connect to the theme of Creative Freedom of Expression. We’ve already begun training the mentors for this cohort and are excited to see what projects the newest Dreamers create.

Interested in the full impact of our work in 2017? Check out our annual report. 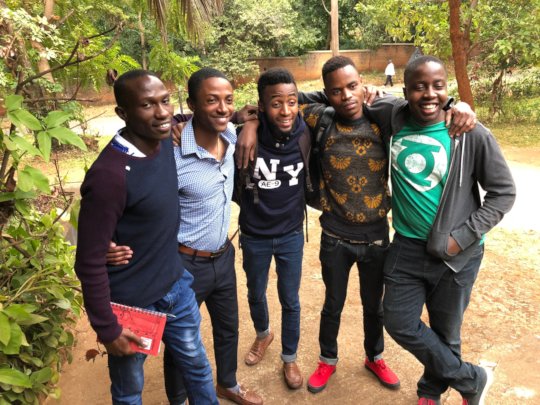 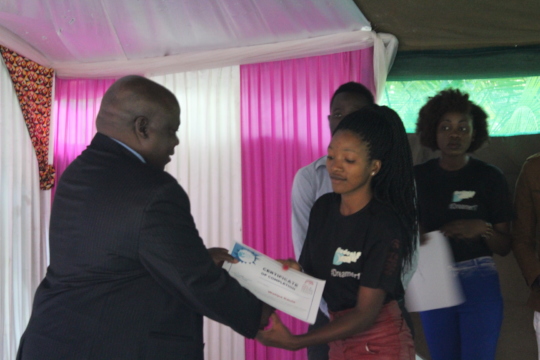 The Students With Dreams year has started with style. We have just graduated our biggest ever cohort of dreamers. Our model has been piloted in Secondary Schools with support from the British Council, and we collaborated with UN Women on an event that celebrated young activists - including our dreamers! That’s before even mentioning the exciting projects and interventions of our Dreamers - breaking down taboos about mental health, condom use and more.

Students With Dreams graduation on 14th April showcased the work our thirty-eight Dreamers have been doing on their projects. Principal Secretary of the Ministry of Education, Science and Technology, Mr. Justin Saidi, attended as Guest of Honour, and we were thrilled to gain endorsement for the project from the top level of Government.

“I would like to sincerely thank ArtGlo for coming up with SWD programme. Basically, if we are to develop as a nation, we need to make use of the energy and potential that these young people have” Mr. Saidi commented in his keynote address.

In January and February, we collaborated with British Council to pilot SWD in secondary schools in Malawi’s capital, Lilongwe, as a concluding activity of 2017’s Festival of Ideas. The project combined our current SWD model and a Human-Centered Design approach, and focused on issues of women's rights, gender-based violence, and sexual harassment; which were raised as key issues during the Festival of Ideas. Nineteen students from three schools in the high-density areas of Kawale and Biwi engaged in a process of training, community research, expert input, and group mentorship to develop and implement their own small projects addressing these issues in their local context.

Sarah, from SOS Secondary school was inspired to focus on the issue of forced marriage when she heard the story of a girl, Chikondi (not her real name), a 14 year-old who was forced to marry a man twice her age and drop out of school.

"I have always believed in equality. I have always believed in the saying that when you educate a girl child, you have educated the nation. I felt I needed to do something to assist Chikondi. Luckily enough, I was mentored and supported by Art and Global Health Center Africa and British Council Malawi on gender-based violence, sexual harassment and women’s rights. I then thought of briefing my friends about Chikondi’s situation. We then all agreed to organise a mini campaign through performances to engage the people of Chitanjira village on the evils of forced marriages. We had a very successful campaign and am happy that Chikondi is now back to school at Namisasa primary school and that her forced marriage has been nullified. It is always good as a young person to have positive impact in the lives of other young people,” said Sarah

In March we were a lead partner a UN Women event to commemorate International Women's Day at Chancellor College. Two of our SWD projects (GRIP and EDOMA) got to showcase the work that they do in advocacy for girl empowerment and education. GRIP- a project that teaches young girls skill that help them become economically empowered and independent- used drama to show the things young girls go through in society. EDOMA, a project working with mother groups in rural Domasi to support and enroll school dropouts back to school, also performed a theatre piece to depict how they became inspired to implement the idea behind their project and how that has affected them personally.

Dreamer project highlights for the past few months:

Art of War (DOMASI College of Education): promotes Sexual and Reproductive Health amongst youth, and breaks down stigma around condom use by developing both a film and social media content tacking the issues. They have released the trailer for their film called “Under the Mango Tree”. Shooting has now been completed and we are eagerly awaiting the full release.

In the coming months the SWD cycle begins again. With the reputation of the programme growing year-by-year, now bolstered by an active alumni community, we can’t wait to see what exciting new projects the next twelve months has in store. 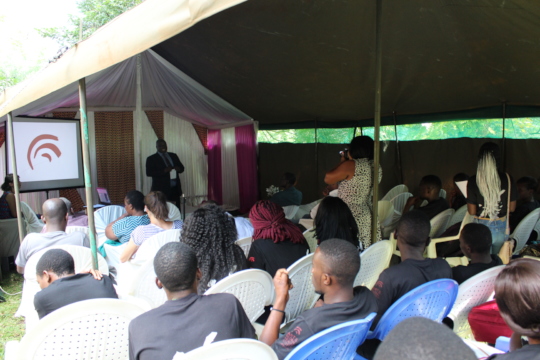 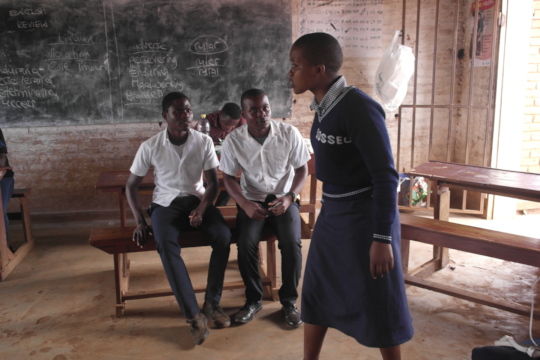