Thank you for your support1!

The Youth Leadership Project brings together youths from disaster areas around the world for an intensive training that takes place in Tohoku, Japan. The youths learn and experience disaster prevention methods, Psychological First Aid and stress-management techniques; Tour the disaster area and meet with local leaders who have made a change, and work towards realizing their goals in planning and implementing disaster-recovery initiatives .

Unfortuntately, due to various financial and Human-Resource reasons, we have decided to postpone the 2017 Youth Leadship Project.

Thank you for your support and we hope to offer the program next year.

JISP is a Non-For-Profit, Non-Governmental, humanitarian organization.JISP envisions a world where communities affected by potentially traumatic events such as disasters have access to high-quality and sustainable Psycho Social services.

We hope this report finds you well.

Next month (September 21), the Healing Japan project will hold a special workshop in collobartion with the Miyagi 3.11 Memorial Community Center.

The Miyagi 3.11 Memorial Community Center is run by Sendai city, and it provides the community a space to commemroate, reflect on the disaster, or just drop by whenever they feel like.

The workshop will be faciliated by Dr. Shlomit Bresler, JISP affiliated therapist with more than 20 years of experiene. Dr. Bresler will offer the participants useful tools in Active Listening (see the brouchure attached).

If you are planning on being in Sendai, please join us (registeration is needed, please see the brouchure for details). We will share the feedback from the workshop in our next report.

Although 6 years have passed since the Great East Japan Earthquake, studies and surveys show that many still suffer from invisible

problems such as emotional scars and trauma, and that the victims require long-term care.By using culturally relevant, non-

traditional methods such as expressive therapies and group facilitation, Healing Japan aims to develop local capacity for assisting a

traumatized population in times of crises, as well as to provide necessary long-term psychosocial support to the victims.We believe

that high-quality, low-cost and sustainable capacity for psycho-social support is crucial for the long-term recovery of people affected

by disasters and other adversities.Our aim is thus to help create such a capacity.Entering the 7th year after the disasters, Japan

IsraAID Support Program remains committed to the people of Tohoku, and continues to work to meet the current challenge of

Thank you for your long-term support to the Healing Japan program! 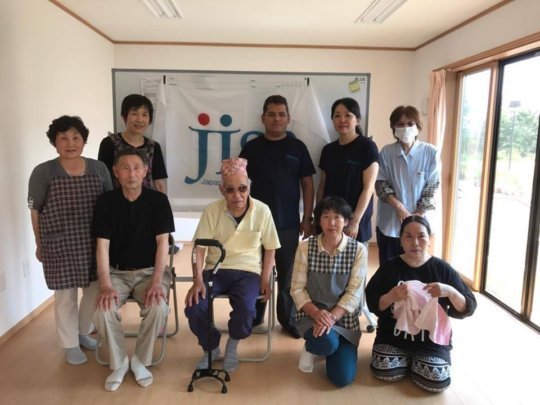 This was the first time the new residents were able to gather together, in what became a precious opportunity to facilitate neighborly relations among the new community. 11 residents participated in the workshop.

6 Years after the triple disaster hit Tohoku, the majority of those who lost their homes in the Tsunami (about 470,000 people in total) have setteled in new homes.

86% of the people who found new homes reside in newly built public-housings (as of March 2017).

But both those who found a new home and those who still live in termporary-housing often find themselves with new neighbours: the old social fabric was disrputed and the challenge is to create a renewed sense of community.

The purpose of this project is to facilitate healthy interaction among residents and care providers of public housings and temporary housings, build after the triple disaster in March 2011.

We believe that by encouraging the residents of the Sanriku coastal areas to communicate and express their thoughts and feelings, a more supportive and resilient community will emerge.

Our aim is thus to help create a safe environment that promotes such interaction.

Entering the 7th year after the disasters, Japan IsraAID Support Program remains committed to the people of Tohoku, and continues to work to meet the current challenge of rebuilding communities.