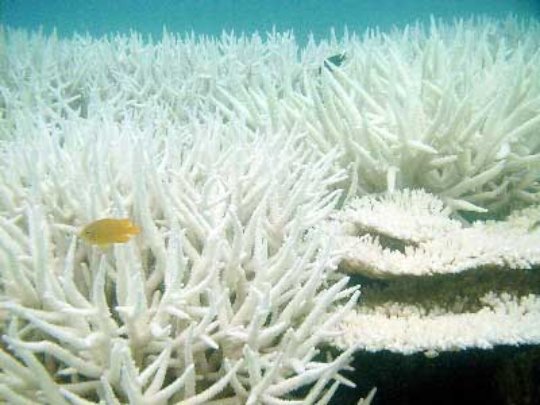 Yet another mass coral bleaching emergency has emerged on the equator north of Fiji, and has already hit the Marshall Islands and Kiribati, and is now moving south into Tuvalu.  By February the severe coral bleaching will likely reach PNG, the Solomon Islands, Vanuatu, New Caledonia, Fiji, Samoa, and other islands and reefs, including the Great Barrier Reef in Australia as well as man of Indonesia's reefs.

This is the third major Pacific-wide mass bleachig event in the past four years.  It seems that we have entered new territory- over a tipping point for coral reefs.  An animated graphic of the bleaching forcast can be found at this link.  https://www.abc.net.au/news/2018-10-26/great-barrier-reef-likely-hit-by-another-bleaching-this-summer/10428298?fbclid=IwAR39fIKl4IZG84lwbhY2Dt39X5wR20b6GAfT6iiV19nEsaCIzPvs_Zl76Bw&amp;pfmredir=sm

Despite two severe mass bleaching events back to back, and two proposals I have submitted to begin the coral work on the Great Barrier Reef, the funding needed to assist that area has not yet been found. The donors decided instead to fund 3-D printed artificial reefs, giant fans to cool the waters, cloud brightening, and robots to spread coral larvae around, rather than coral restoration methods proven to work, focusing on protecting and propagating the few bleaching resistant coral survivors.

However we refuse to be discouraged, and in a new development, the Government of Tuvalu recently funded our project.  In September, a new coral nursery was established on Funafuti Atoll, and filled with bleaching resistant corals taken from hot pockets in lagoons and extreme shalow areas of the reef.  Staff from the Fisheries and Environment ministries were trained and the work continues even in my absence.  I have offered to return next month to assist Tuvalu, and I have already purchased tickets to Christmas Island Kiribati to prepare our coral nursery there for the approaching bleaching, and to rescure corals from vulnerable reef flats that we expect might will get far too hot for anything to survive by January.

We are also trialing a new technque which shows great promise in actually preventing bleaching- treating the corals with Iron Chelate- which helps prevent the formation of toxic oxygen in the cells during the hot water event.  Hopefully the resuts will come in early enough to share the technique to prepare corals on the Great Barrier Reef and Fiji etc for the forcast Februray/March mass bleaching.

Your donations help make this work possible..... and so we thank you from the bottom of our hearts!   Hopefully we will get the support we need from grants by next year- but in the mean time- it has been YOU who have been so critical in saving the coral reefs.

Offering a Helping Hand to the Great Barrier Reef 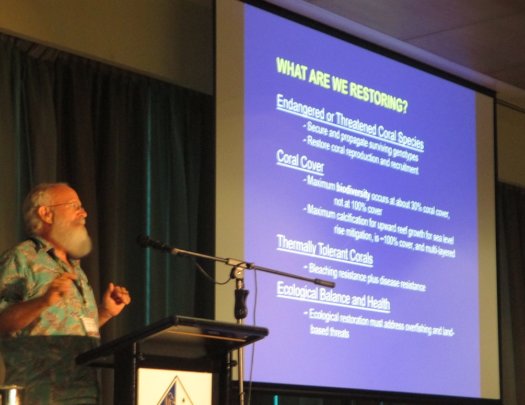 Austin presenting at the Cairns meeting

As you may already know, an estimated half of the corals on the Great Barrier Reef of Australia bleached and died in a double bleachig event in 2015 and 2016.  These corals died when the water got too hot in the Australian summer-  directly tied to global warming.  Some scientists believe that the GBR will be dead by 2050- but we believe otherwise, and based on our work in Kiribati and other places.

But the reef does need our help to get past this serious hurdle.  The stategy needed for the GBR is exactly the strategy that we are carrying out elsewhere- to identify, protect, and propagate the corals which did not bleach, and the to replant patches of these hot-water adapted, bleaching resistant corals back to the reef so that they can reproduce and send their babies and algal symbionts throighout the wider reef system.

In February, I applied to the Great Barrier Reef Challenge with our approach, but the application was turned down in favor of projects in cloud brightening to cool the reef, 3D printing of artificual reefs, and installing large fans and artificlal upwelling to cool the reefs. They told me that they were only funding new approahes, not existing (proven) ones!

In July, the first symposium on the restoration of the GBR was held in Cairns, and the organizers paid my airfare from Fiji so that I could present.   This presentation is now on the internet at  http://www.reefresilience.org/learning-from-reef-restoration-experiences-around-the-world-webcast/

I also gave an interview for Radio Australia's "Pacific Beat" program.  In my talk and on the radio program, I emphasized that coral gardening can only help save coral reefs to a certain point- that it buys us time- perhaps 80 years or so- but that if CO2 continues to be released into the atmosphere at such high levels, that ocean acidification will become so bad that it will kill the oceans and destroy all of our progress.  Australia and all nations must reduce and evenually eliminate most fossil fuel use- that is the stark reality we face.

The day after the Cairns conference, I was able to visit Austraia's first coral nursery at Fitzroy Island. Stewart Christie and his team at the Reef Restoration Foundation are doing a wonderful job, only having gotten a permit for the work last November.  A big problem preventing action now is that permits must clear five differenct agencies for approval, and they are restrictive in what they allow.  I was shocked and horrified by the stark reality that no one has been collecting corals on the most heavily impacted reefs in order to protect and propagate them - and so with each passing day more of the bleaching resistant corals that survived the bleaching are being killed off by COTS and snail predators.  With the present rules and regulations of the GBRMP set so strongly into law, it may take years before changes can be made so that our strategy can at last be applied widely to the Great Barrier Reef.

However, we discoverd a way round the permitting process- If we work outside of the marine park, on the 10% of the GBR under indigenous control, and with the permission of these indigenous leaders and directly involving the communities in the work, then we can begin the coral work immediately!   This is wonderful news, as this extreme north area of the reef was among the most horrifically impacted.  Our goal now is to attempt to put the indigenous peoples of Australia in the forefront of saving the Great Barrier Reef.  We are following up with contacts already made at the Cairns meeting and hopefully we will have some work to report by November.

Because we have succeeded in getting a small grant to help with the restoration work on Kiribati, with a three-week trip scheduled for January, it looks like we do have the resources needed to divert our attention to the GBR, at least with a small beginning.... all that is missing now is to identify the appropriate aand interested local partners.  And we will need more resources, and so we have begun seeking funds from other sources. For now this plea on GloblGiving is all that we have. We thank each of our donors for assisting- please do spread this message to all who might support this important work.

I find that it is interesting that involving the indigenous peoples in this most important work will in fact be fulfilling biblical prophecy:  "The first shall be last and the last shall be first."

We do this work to help ensure that future generations will inherit a bountiful and beautiful world, where coral reefs contiue to thrive. "Blessed are the meek for they shall inherit the earth."

Blessings and light to you all. 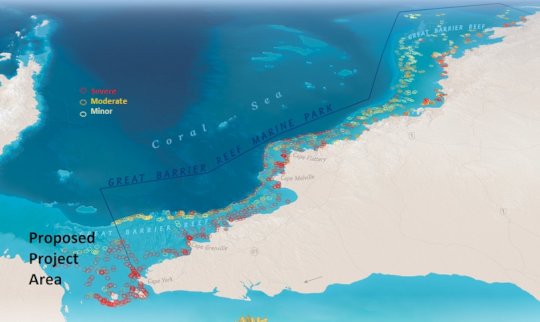 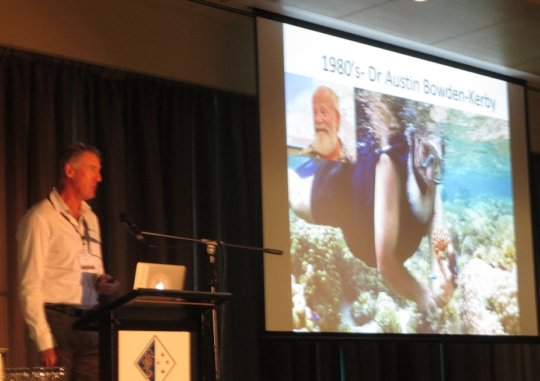 We were the topic of other's talks 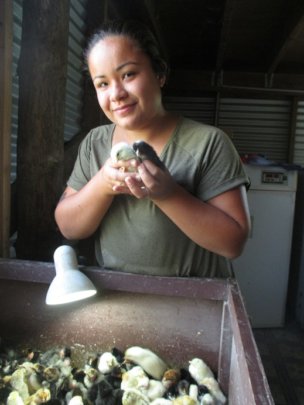 The hatchery is again fully operational, with 250-300 chicks hatching every week.  A big obective is to continue improving the local chicken breeds through selective breeding.  With that in mind, all of the breeding roosters were changed in April, as the one-year olds were getting too big (4-5kg), and their long and sharp spurs were beginning to hurt the hens.  All hens are kept as layers for at least three years. The diversity of feather color and egg color is amazing, the eggs range from brown to tan to white, to light blue and dark green.  Eggs- clearly from our chickens- are now appearing for sale in the markets. Productive and happy chickens are making a real impact on the communities and farmers.

Farmers from all over the area want the chicks, which are now clearly recognized as being much better than anything that is available imported from overseaas, or locally hatched.  The people come on foot, by car, even on horesback, to purchase the chicks, sold at $2. Fijian = $1 USD each, which is helping make the project more self-sustaining.  About 20% of the chicks contiune to be donated free of charge to workshop participants and to the poorest farmers- widows, disabled people, the elderly, etc. Materials for pens and feed are also donated to workshop graduates, selected from the poorest communities and those impacted by the recent hurricanes and floods.  We have also sent seven small incubators out to the comunities and we there is a need for purchasing more.

The last week-long workshop, with 18 participaants was in late June.  We have since raised up close to 100 chicks to the eight-week stage, and they are now ready for sendng to the interrior vllage of Wairuarua, Naitasiri.  Additional chicks are being raised for the trainees from Beqa Island, and fertile eggs are being sent to Koro Island to support the small hatchery we helped establish there.

The big news is that with our increased prosperity from farm sales, we have been able to provide a stipend for a full-time hatchery manager, Mrs. Nicole Raivoka, 23 years old and a graduate of Environmetal Studies at the University of the South Pacific.  Nicole is gaining work experence, and she loves the chickens. We are so thankful for the much needed help.

More news!  We have secured funding for installing solar power to the hatchery!  This will be a BIG help as the power goes out so often at the farm, and for days on-end, during floods and after cyclones.  We need to get this done and dusted by November when the cyclone season begins.... for now we are in a drought and eperiencing very cool weather down to 13C (57F) at night.  But it is good for the chickens, as they are thriving and  producing over ten dozen eggs a day, about 2/3 of which go to the hatchery.  Any eggs that are too small, too big (double yolked), deformed, cracked, or dirty are used for food.

Thanks so much to our donors for your generous support, which makes this all possible. 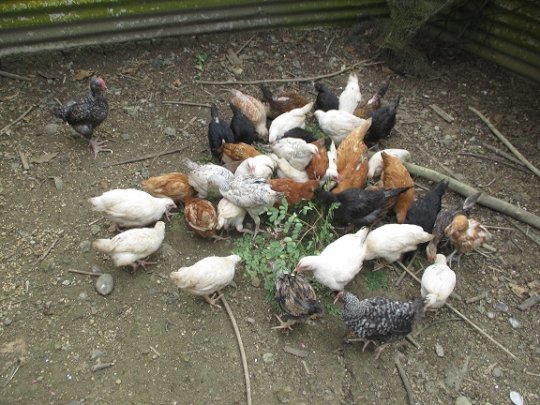 Chicks for Wairuarua just love morniga leaves
‹ 1 ... 6 7 8 9 10 11 12 13 ... 25 ›
WARNING: Javascript is currently disabled or is not available in your browser. GlobalGiving makes extensive use of Javascript and will not function properly with Javascript disabled. Please enable Javascript and refresh this page.