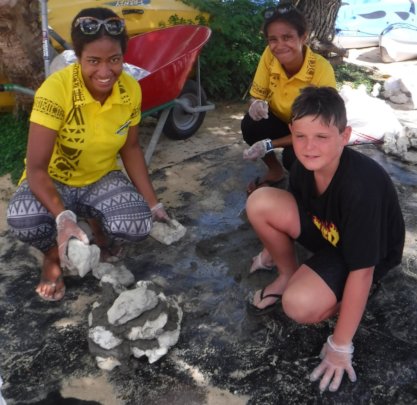 Coral bleaching has hit our Fiji sites. The hot Southern hemisphere summer is coming to an end, but it has taken a toll on our corals.  The ocean water temperature got to 33C (90F) in the nearshore reefs and 30C (87F) on the outer cooler reefs.  Many of the corals became badly stressed and lost their symbiotic algae and turned white, and some of those are now dead or dying, on both nearshore and outer reefs.  However, on the positive side many corals did not bleach at all- they have shown themselves to be bleaching resistant 'super corals'.  This is very encouraging.

Last year we trained 18 coral gardeners, two who are now employed full-time by Plantation Island Resort. These coral gardeners, Sera and Merekelini, were rather horrified by the bleaching, which was their first experience with so many corals dying.  Some of the corals they had established in the nurseries are now badly bleached, and some have died.  But I am thankful that this happened early on in their coral gardening careers, as they now know how important selection for heat tolerance really is!  The girls have been busy collecting newly-killed corals for use in an educational display, rather than having this sadness be for nothing.  And because the super corals are clearly identified now, we are making plans to sample as many of the unbleached corals as possible- to bring  bits of them into the nursery- to replace the dead and bleached corals.  The bleached corals that are still alive will be repanted to cooler water reefs to observe if they recover.

We have invited the resorts from around the Malolo district to send trainees for an emergency training on 13-17 May. Two scientists from the Australian NGO, People for Ocean, will be joining us as volunters and staying on for four months, and Sea Stewardship, a newly registered conservation NGO in Kiribati, who have a 70-foot sailboat that can sleep eleven, has also come on board. The resort has offered their 20-person dorm, plus free meals and boats for the workshop, and so we will be developing a major expansion of the coral work, to quickly collect as many samples from the super corals as possible and to establish them in resorts and communirty sites throughout the Mamanuca Islands.  We are using this bleaching as a warning call to push the coral work to a level yet unseen in the South Pacific.

In addition to all the activity and stress caused by the bleaching, a team of four from Netherlands TV visited us in the site three days ago to film the bleaching and especially to record the super corals, and their footage includes our coral gardeners and the nurseries, we will be included in a four part series on climate change to be aired in Europe in four languages: Dutch, English, French, and German.  We are becoming a ray of light and hope in all of this darkness- and you are part of that.

The Fiji work is indeed progressing quickly, with most expenses now covered by the tourism industry, and with additional resorts now coming on board and hiring the university graduates that we have recently trained, expanding this amazing and important coral work.  However, we continue to rely on your donations through GlobalGiving for the vital Kiribati and Tuvalu work, coral reefs in grave trouble there.  Remember that Kiribati suffered the loss of 99% of their corals- the hot water that lasted for just 2-3 months in Fiji in 2018-19, lasted for 5-6 months in Kiribati and for four months in Tuvalu, and the hot water is expected to return to Kiribati in June/July.  In 2014-15 the bleaching lasted for 15 months straight in Kiribati- but even though these are the most impacted coral reefs on the planet, there has been no follow up or monitoring by anyone at all, except for us, meager though it be.  Now with the Sea Stewardship partnership and their large sailboat, we have the potential to visit each of the atolls of Kiribati and Tuvalu for assessment and to create gene bank nurseries in association with the communities. Anything that has survived will be the strongest of the strong. Thus-far we have projects on only two atolls out of the 42 atolls of Kiribati and Tuvalu. We will continue to look for more funding, and we have gotten one small grant in additon to the GG funds, and Tuvalu government has matched our funds there.

So we remain dependent on and greatly thankful to our donors, who keep the project alive, without which we would not have made any of this progress.  Expenses at C4C are low, as no one in or organization is on salary- and there is no overhead.  I am attaching the detailed report on our Kiribati coral nursery, updated from the December 2018 trip.

In closing, we have just three days left (till 29th April) in a GlobalGiving climate change challenge. If you would consider giving another even small donation to the project, all donations are matched 50% during this period. Plus if we win the challenge (based on numbers of donors, not amount given), we will gain a significant award and will be promoted to the staff of some large companies, and will also appear prominently on the GG website. 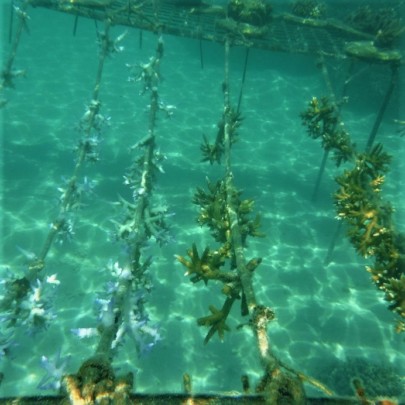 Bleached corals and super corals in the nursery 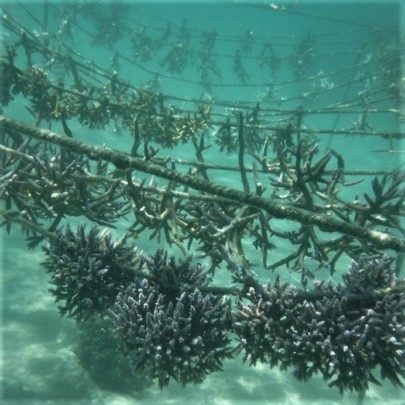 Super corals in the nursery at one year. 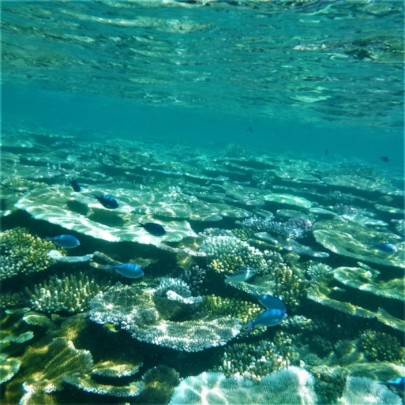 Bleaching reef, but some corals are not bleached! 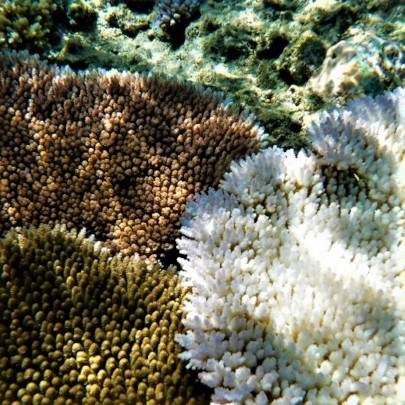 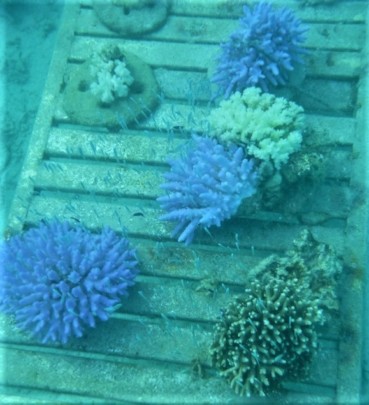 Hot water testing site >35C- all but one bleached 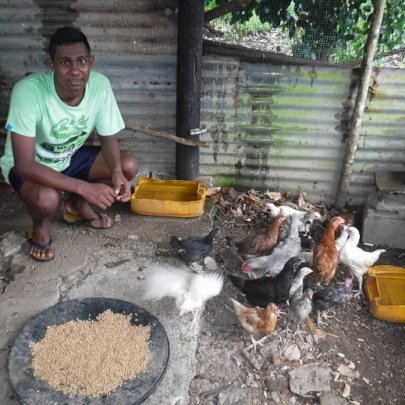 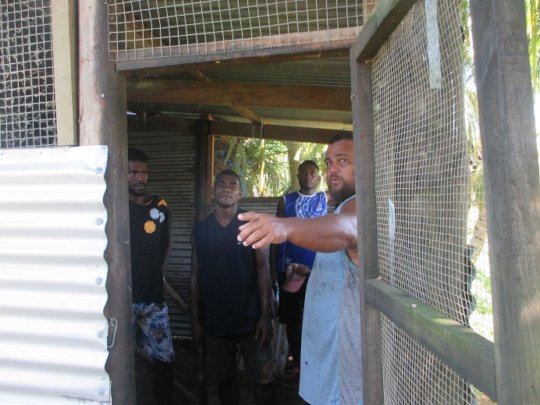 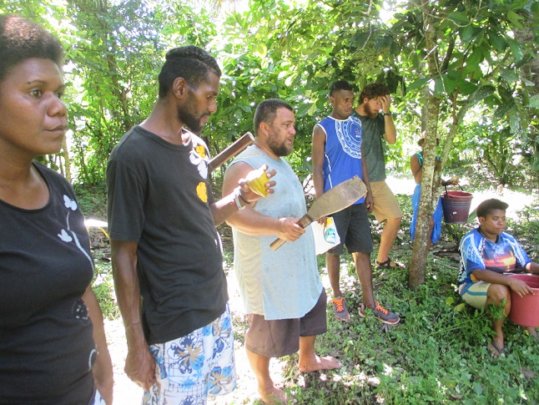 Pausing for reflection during the lessons
Feb 5, 2019 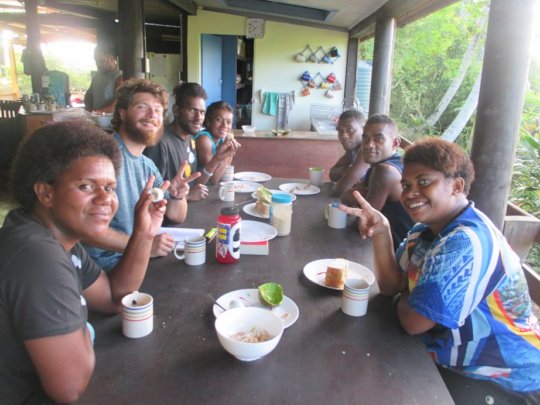 Participants at breakfast this morning

Greetings to all of our donors and supporters.  Just yesterday, 4th February, 2019 we began our lastest workshop for the communities affected by Cyclone Winston.  Seven youth came by bus and carrier from remote Nandelei Village, in Ba province to our Teitei Livelihoods Centre and happy chicken farm, about five hours distant.  US Peace Corps volunteer, Glenn Hall, organized the Nadelei youth group and found additional support funds.

Many of the participants lost their homes during the cyclone, and one of the participants had been badly injured as well, while others had family members who were badly injured as their homes crashed down on them-  in the southern hemisphere's strongest ever recorded cyclone. While fortunately none were killed in the village, everyone suffered great material loss. The good news is that almost three years later, reconstruction is nearing completion, crops are now thriving, and most homes have been rebuilt.

The village had previously been known for its many chickens, but most ot the chickens were killed in the cyclone, as the huricane hit at night while the chickens slept in the trees.  The goal now is to improve the local chicken farming methods, so that the chickens sleep in cyclone resistant houses, while continuing to be free-range, while also improving the size and egg laying ability of the breeds through crossing the surviving chickens with our improved Happy Chicken mixed breed.

The youth are very excited to be learning the happy chicken methods, while also learning about the bigger picture and facilitating the wider development of the village.  For example, as coconut is so important to the food security of the community and as animal feed, and as there are so few coconut trees remaining, the planting of coconut trees must receive a major focus and so we plan on sending coconut seedings back with the group, along with the six-week old chicks we are also sending.

As electricity has now been restored to the village, we have promised to send a small incubator to the youth group, once the chickens are laying, so that the project can grow under local inititive. We will continure to follow up with the Nadelei community for the next 2-3 years, through our project officer Simi Koto and the Peace Corps volunteer and his replacement.

As the disaster response is coming to a close at three years, and as we are coming close to our original goal, we are now planning to merge the disaster project into the main "Happy Chickens for Food Secirity and Environment" project on Global Giving.  If you wish to continue supporting our work, please give to the main project.

Vinaka vakalevu - thank you for making this important work of love possible. 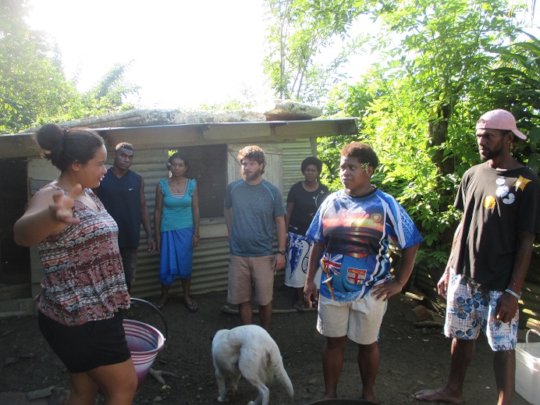 Nicole Raivoka teaching about the chickens
‹ 1 ... 4 5 6 7 8 9 10 11 ... 25 ›
WARNING: Javascript is currently disabled or is not available in your browser. GlobalGiving makes extensive use of Javascript and will not function properly with Javascript disabled. Please enable Javascript and refresh this page.