Update on the Mass Coral Bleaching and Our Urgent Response

By Dr. Austin Bowden-Kerby - Project Scientist, and defender of the corals 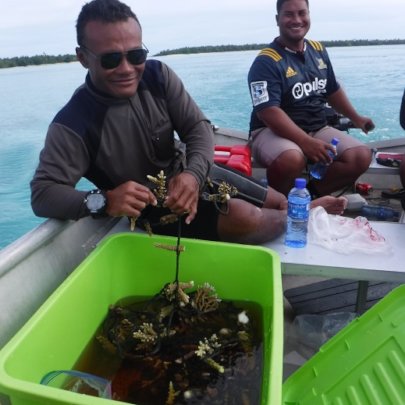 The mass bleaching continues unabated for the Gilbert Island chain, Kiribati, with the deep ocean waters over 35C or 95F since September, and most of the corals will now likely have died.  But the sad thing is that no one has checked- there is no program- there is no plan.  This is a natural disaster hidden below the waves and out of sight.  We hope to do something, but are focusing on saving corals at this time, not on recording dead ones- it is so frustrating- like being a single medic in the midst of a massive battle.

The Line Islands, also part of Kiribati, experienced a 14-month bleaching in 2015-16, and >95% of their corals died, and we are the only ones working to bring those corals back.  We last travelled there in December, on our fifth trip, and wonderful things are beginning to happen with the nursery work there.  I will report on that work next time, and perhaps some on the Fiji work as well, or maybe write some extra reports. But for this report, I report on something even more important.

In September, I begin the coral adaptation work on Funafuti Atoll, funded by the government of Tuvalu.  Afterwards, in October, reports of bleaching began to come in.  However, the government budget was all spent, so they could not pay my way back so soon.  In November, funded by you through GlobalGiving, I travelled once more to Tuvalu, to the great surprise of government officials, who willingly provided boats and materials.  The Ministry of Fisheries and the traditional Kapule chiefs sent helpers for training, and it was a alot of fun.  Wonderful lunches were provided by the Ridge to Reef program, while GlobalGiving covered the airfare from Fiji and helped with accommodation costs.  Corals for Conservation, as always, provided the leadership and traing at no cost.

The coral reefs are indeed badly stressed with hot water, with temperatures of 33C recorded for the main lagoon, but fortunately most corals remained in a state of less severe bleaching, with most only partially bleached. But the bleaching since November has gotten worse, as expected based on reports.  Local capacity has been built.

The emergency work on Funafuti focused on identifying hot pockets of water in the shallowest parts of the lagoon, and collecting samples of each unbleached coral found there, for re-loaction to cooler water nurseries.

Our experience on Christmas Island taught us that despite these corals located in the the hot pockets being the most bleaching resistant of all the corals, surviving in temperatures of 37-38 unbleached, the mass bleaching event can bring temperatures over 40C = 104F in the shallows, which is too hot for even the most resistant of the corals to survive.  So the trip was a coral rescue mission.  We were able to secure about 400 genotypes of branching corals in this manner.

Fortunately there are no Crown of Thorns starfish to worry about on these atolls, only some coral-eating Drupella snails, which can not reach the nursery ropes.

A second objective of the trip was to trial iron treatments- as a way of raising bleaching thresholds, as atoll environments are extremely low in iron, which weakens the corals.  Two sections of reef were treated with slow-release iron chelate. The corals brought in to the nurseries were also treated in an iron chelate solution for an hour, as recommended by aquarium experts as a means of lessening bleaching caused by the stress of moving the corals during a period of warm waters and high uv.

The government has refilled their coffers and have now promiosed to pay my way back to Tuvalu in March for two weeks of follow up on Funafuti and expanding the nurseries to three additional atolls.  I am eager to get back and to see how the nurseries are faring in the bleaching, and if the iron treatments have helped reduce coral mortality.

It is obvious that we greatly need traing in these countries for monitoring and coral adaptation programs, as well as a well funded multi-decade coral focused adaptation program.  If these waters were USA or French territories, I can imagine that at the very least, monitoring would be taking place, and the seriousness of the bleaching and mass coral death would be reported.

But on the positive side, I was on BBC radio last week, and also on ABC TV Australia and Radio Australia- speaking about this work and the seriousness of the bleaching- and all in one week!   I have added the links below.

The mass bleaching is now predicted to hit Samoa and Fiji by late March and April, and it is frustrating and scary, and I am feeling far too alone.  But please know this: what we are doing is paving the way- proving methods and strategies that will one day benefit the coral reefs everywhere.  I thank you from the bottom of my heart for your assistance. 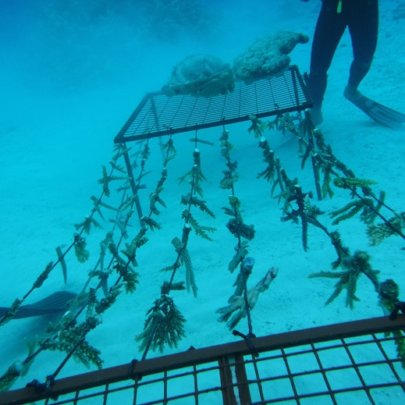 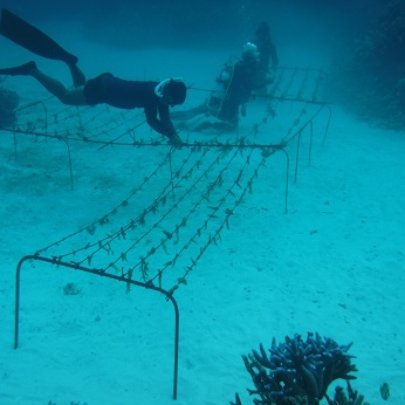 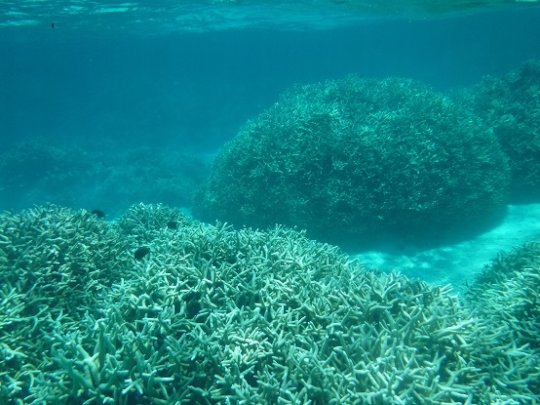 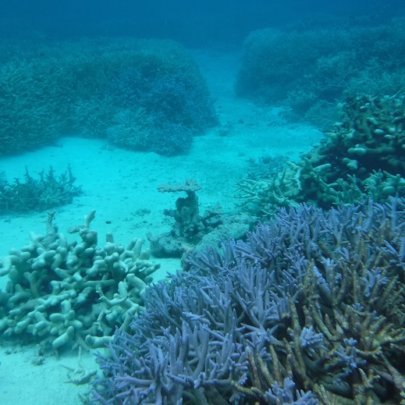 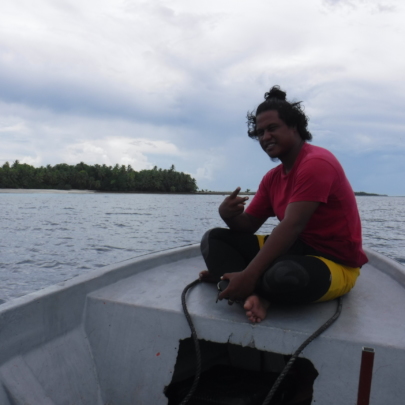 Happy Chickens for the Remote Islands of Taveuni and Kadavu 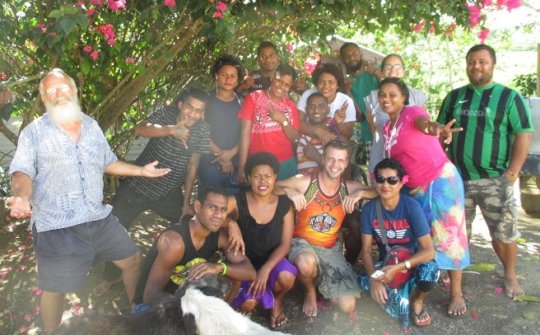 Workshop Participants, with trainees and PCVs

We just last week finished up two weeks of training for 22 traines - seven men from Kadavu, seven women from Taveuni, and joined on the second week by eight from a local NGO who work with communities in the provinces of Tailevu and Naitasiri.

The Kadavu trainees arrived after one full day of travel by boat and bus, while the Taveuni women travelled for two whole days to get the the farm- three hours by boat to Vanua Levu, then a six hour bus ride acoss the island, a seven hour ferry ride to Suva, and a three hour bus ride to the farm.

Two US Peace Corps volunteers, Courtney stationed on Taveuni, and Wade stationed on Kadavu, organized the communties and will be folloing up over the next year to help ensure project success. Much of the cost was covered by grants from the Fiji PC Offiice.

We sent with the communities larger four-week old chicks that we had raised up, 130 for Kadavu and 75 for Taveuni.  The goal is to create breeding flocks to increase the project.  We aso sent with the trainees materials for a mobile rearing pen, chicken feed, and cuttings of perrenial plants grown as feed sources for the chickens: Moringa and Costus.  The chickens and associated costs were all covered by donations through GlobalGiving.

The participants left us happy and encouraged and full of hope for the future. We have received word that all of the chicks made it safely to their respective destinations.

An additional 45 of these larger chicks were sent last week to Beqa to the women's group there who were trained earlier in the year.  An additional 75 chicks- now five weeks old, will go up into the interrior of Naitasiri nt week, to the trained communities.  We are very busy!

Thanks so much for touching these communities and helpng make this all possible. 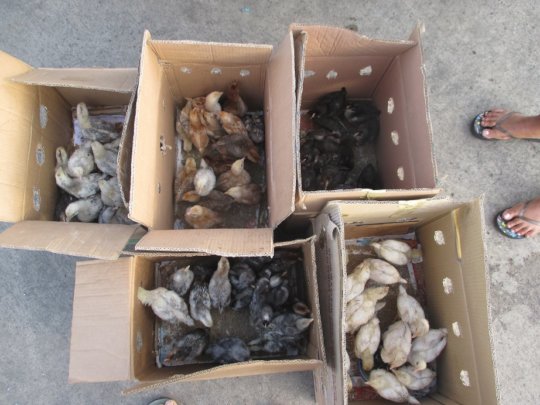 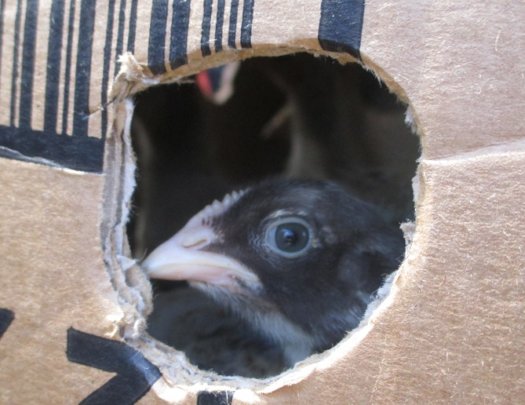 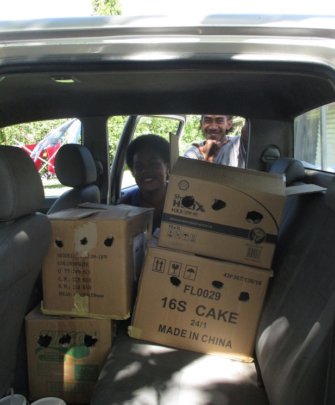 Three hours to the Suva Wharf 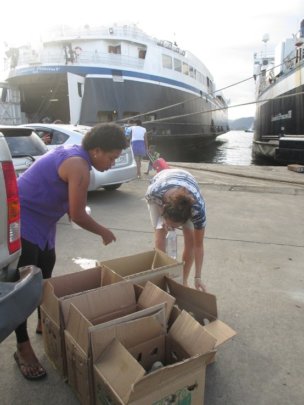 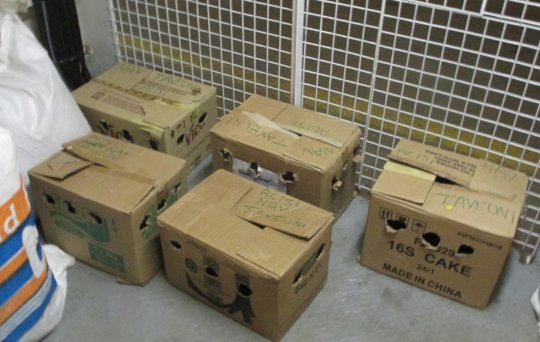 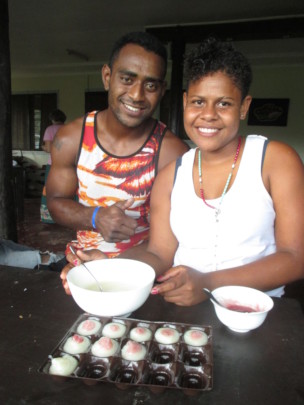 Seven women came to the farm from the cyclone affected area of southern Taveuni island for Happy Chicken traing and they returned home last week after twelve days, with lots of new knowldege as well as with the chickens to start up their own breeding flocks and local egg cooperative business.

In addition to the poultry training, the women also received training in sustainable livelihoods, such as virgin coconut oil production, coconut cheeze and vinegar production, and permaculture.

Taveuni and all the cyclone hit areas of Fiji are recovering well now, and so this project will soon be merged with the main Happy Chicken project.  Much more is being done as the need for sustainabe, locally based production is great, providing much needed protein to chldren and rural families. We have already produced over seven tousand chcks since May, for a total of about 30 thousand produced in five years. The impact is much greater when we realize that many of these chickens are now breeding and procucing chicks ftheir own. We also have sent out four 90-egg incubators around Fiji and three to Vanuatu.

Thanks so much for your continued assistance and helping make this work possible, 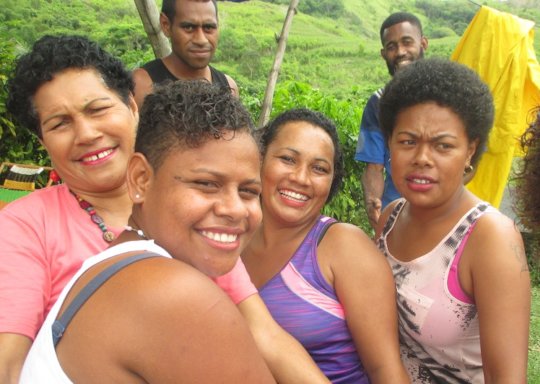 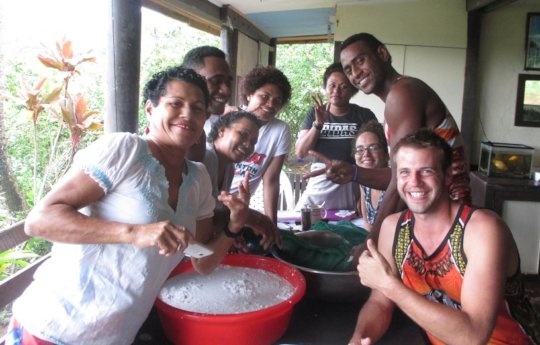 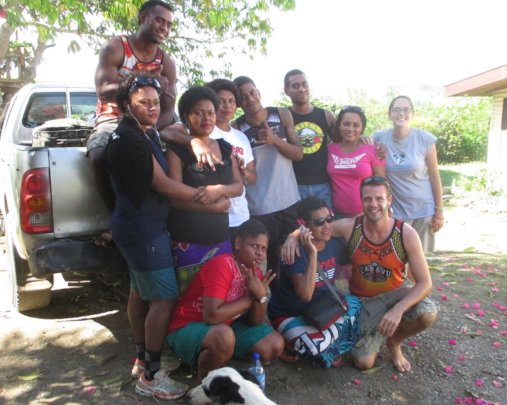 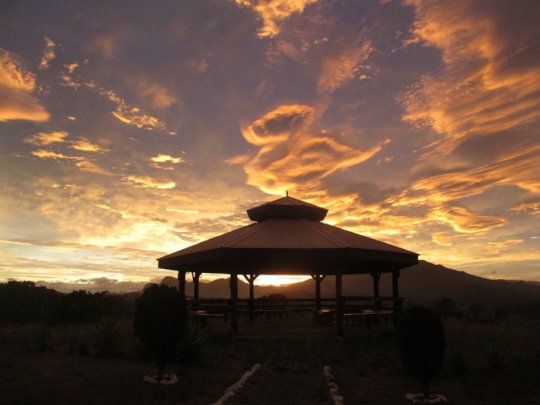 Dawn over the workshop
‹ 1 ... 3 4 5 6 7 8 9 10 ... 23 ›
WARNING: Javascript is currently disabled or is not available in your browser. GlobalGiving makes extensive use of Javascript and will not function properly with Javascript disabled. Please enable Javascript and refresh this page.