Greetings to all our donors and circle of interest.

News:  We have made real progress with upgrading our breeding pens in order to pass Biosecurity requirements for approval to send the chicks to Vanuatu.  The improvements are also making the pens much safer for trainees and the many children who "help" with the feeding and egg gathering!  The work, funded by a small grant from Ford Motors, was overdue.  The pens were unsafe because of a large colony of rats that had created a maze of burrows under the pen's dirt floors.  The rats had evaded all attempts at control.  I contracted the rat-borne disease leptospirosis, and our neighbor died of the disease a few years back.  We have now cemented the chicken house floors and sealed off the labrinth of rat tunnels.... and without their hiding places the rats have either died or have moved out!  The mistake of allowing left over feed to remain in the pens over night has also been corrected, so future rat problems will be kept to a minimum.  Once Biosecurity gives us the green light, the Vanuatu work will commence, which should be in late July.

In the mean time here in Fiji we have begun the groundwork for a Happy Chicken workshop to take place in Votua Village on Fiji's Coral Coast, where the community has set aside a large reef area as a communty managed no-fishing conservation area.  Luisa, the wife of the village chief, is one of our most active Happy Chicken participants, and we envision a woman-focused project.  We will provide mobile rearing pens and training support, and the women will purchase the chicks at cost, and will build (with our input) the small chicken houses from local materials.  As the village is a major coconut producing area, training in virgin coconut oil production will also be conducted, with the waste coconut serving as a major feed for the chickens.

Chicken News:  Summer vacation is over!  The summer molt, the two month period where the hens "go on vacation"- stop laying to rest and repair their bodies and change their feathers, started in late February and ended in early May.  We began setting eggs into the incubator just three weeks ago, and our first hatch took place this week. We sold nine dozen chicks to the community at cost in the Sigatoka Market on Saturday.  The hatch rate this time was only 60%, but we have since purchased a new humidity monitor.  We then discovered that the humidity was far too low in the incubator, and so we have been able to add pans of water and increase the humidity to the required 50%.  We have also added a hatcher, with a humidity of 75%, and so with better control of the incubation and hatching process we expect that subsequent hatches will be much improved. Lessons learned- don't trust faulty gages!

Lastly, the UK NGO Just World Partnerships will be supporting me with a stipend this year, allowing full time focus on the Happy Chicken work.  We can assure you that all of the funds donated will go towards actual project costs, not personnel.

Thanks again for your part in making this work an emerging and growing success,

News and Updates on the Happy Chicken project 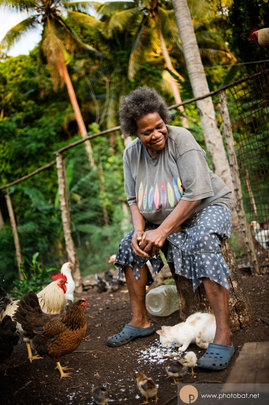 Village Chickens In Vanuatu before the Cyclone
Hi friends.  The good news is that we have now raised over US$5,000 and so we have been added as permanent members of Global Giving, a great help to future funding!
We are also in discussions with Vanuatu government disaster relief management officials assigned to agricultural recovery and we have agreed to collaborate to avoid duplication and to make the work more efficient.  We already share a similar vision of improved village-level production of poultry, and C4C brings to the table improved village-appropriate methods to increase efficiency.  We also have an existing broodstock of over 100 diverse village-adapted hens, with 20 breeding roosters, capable of producing 8 thousand chicks per year.  Eight heritage breeds of chickens will also be brought into Fiji from New Zealand in September, and within six months these chickens will be added into the breeding flock, to increase the geneic diversity and productivuty of the chickens.
So why is a coral reef conservation organization workg on community chicken farming?
The following was Modified from a post to Coral List March 2015:  Dr. Austin Bowden-Kerby, 10 April 2015

Even chickens can help save coral reefs!

Poverty and a lack of alternative protein sources is directly linked to overfishing, which in turn leads to coral reef decline as species that normally control coral predators and algae disappear.  A widespread and prevailing condition exists on coral reefs globally whereby coral-killing animals (cerain starfish, snails, and worms), have become plagues on the corals and where algae overgrows the reef.  Reef degradation in turn leads to increased levels of hunger and more desperate acts of destructive fishing, using poisons and explosives to catch fish.  Similar negative impacts can be seen on terrestrial ecosystems and to wildlife as rural communities turn to bushmeat as one of the few food resources available to them in order to survive.  While many have said that we must address food security and poverty in order to break this cycle of overfishing, overhunting, and associated habitat destruction there are few projects addressing this matter.

The “Happy Chickens for Food Security and Environment” project promotes small-scale backyard production of chickens at low densities (subsistence level), so that the flock is able to obtain much or most of its food by forging for worms, bugs, grass, and compost.  Two to three dozen chickens per family; just enough to provide eggs for daily use and an occasional rooster or hen for the table for use during special family events.  For areas with less foraging space, cut grass and vegetation can be brought in and composted to support the chickens, supplemented with root crops, coconut etc. Chicken farmng is already part of the cultural framework of these communities.  The fishermen/ farmers are trained in the sustainable methods, which a modified and improved traditional backyard production system.  They receive a mobile rearing pen, chick startr for 5 weeks, and two dozen improved production village-type chicks.  The chickens begin laying eggs at five months, and breed a six months to produce the next generation, and the resulting chicks are cared for using the new methods, tripling the reproductive efficiency over traditional unimproved methods.  The farmers quickly become self-sufficient, while becoming less dependent on reef fish and other wildlife to meet their nutritional needs.  At 6-7 months each recipient farmed turns the rearing cage over to a new family, along with two dozen chicks, and the project doubles in size in this manner... the chicks are fed worms at that point grwon in compost established in the original training.

The project does not support factory farming of chickens, which we feel is cruel, and which can result in considerable waste release into the environment, plus reliance on expensive commercial feeds imported to the islands.  Intensive commercial poultry production is a hazzard to coral reefs and does not address sustainable livelihoods for reef dependent communities either.

We have also made considerable progress developing low-intensity tilapia farming in polyculture with Muscovy ducks, and with geese for added security. We operate two fishponds at our Sustainable Environmental Livelihoods Farm, and have also established a demonstration site at a local boarding school, funded by Ford Motors through Global Giving.

Although small, the Happy Chicken project is up and running and is perhaps the first project of its kind.  We were able to produce over five thousand baby chicks and 500 baby ducks last year and distributed them at cost to some 300 rural families in Fiji.  This year Vanuatu is our main target due to the recent severe cyclone (winds gusting up to 320Km/hr), which wiped out nearly all village chickens and damaging coral reefs. The last thing damaged reefs and forests and associated fish and wildlife need is increased fishing pressure.

Another goal now and into the near future is to identify ongoing projects in need and to partner with them in order to best support no-take marine protected areas and terrestrial nature reserves with the "Happy Chicken" project, replacing the protein lost during initial project establishment as well as preventing increased fishing/hunting pressure on the remaining open areas. We are yet to find a major donor, but we have accomplished much and will continue doing so through generous smaller acts of giving.  We would be happy to assist other geographic areas with startup of their own projects based on the lessons we have learned in the Pacific, and based on additonal funding.

Thanks so much to our donors, and fro haring the link to the project with others.

Thanks so much and Exciting developments!

Wow, thanks to all of our donors, and the donations that continue to come in.  We are nearly there!

We are in contact with the disaster relief people in Vanuatu and will coordinate with them on the ground.  Apparently our Happy Chicken breeding fock and hatchery is the only one of its kind in the region, and the village-adapted chicks will be ready to go as soon as the communities are stable and have their basic needs of shelter, food and clean water met.  At the moment there is a lot of suffering due to the scale fo the disaster and the large numbers of destroyed vllages. Nothing fo this scale has ever occurred in the South Pacific.  However the people are incredible and remain cheerful, happy, and hopeful- amazingly resilient and optimistic.  With that spirit of optimism and unified action recovery is proceeding, and so in a few months they will be ready for Happy Chicken, and we will be more ready to help them as well. Until that point Fiji communities will continue to be helped, and the project at the local boarding school (only two kilometers from our farm), will as soon as the fence is complete, have chickens and ducks added to the enclosed new fish pond that we recently dug, funded through Global Giving.

Rural communities in Fiji and Vanuatu are through this project becoming more healthy and prosperous, and we are supporting community-based conservation efforts by lowering demand on reef fish, forest birds, and flying foxes for meat. The horribly hit cyclone areas are the urgent priority in the coming months, looking to the long term establishment of Happy Chicken flocks in the majority of communities and families, if possible within 5 years.  Our vision and strategy will be that every recipient family will in turn provide two dozen chicks (hatched under their happy hens) to another family within the first year of receiving their own chicks from the project, causing an organic project expansion and permanent positive change.

With your donations today (29th March) we have now raised $4,570. from 39 donors, and so we will most certainly make the 5K goal and be permanently listed as a receipient and partner organization on Global Giving!  SO exciting!   This exposure will ensure that we can expand our efforts with Happy Chicken and with Coral Gardening in support for no-fishing marine protected areas and forest reserves.  We will soon be able to request additional funding from the 75K fund for Vanuatu that Global Giving is raising on their online appeal that will only be accessable to the partner recipients.  So your contribution is being amplified many times over.

I will continue to post updates to this site, so stay tuned and send us your happy thoughts, positive energy, and prayers!

All the best in your lives and work... be happy, knowing inside that you ARE making a difference.