A New Breed of Chickens and Exciting Developments 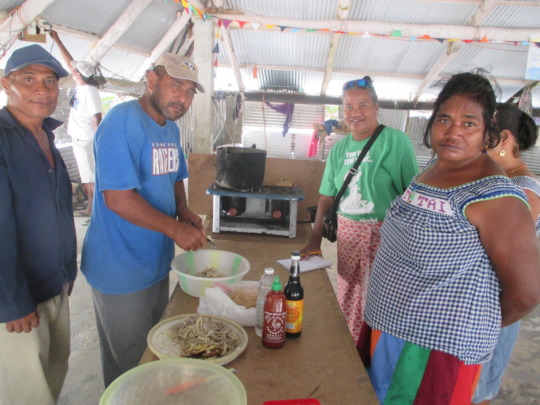 Hello to all the happy chicken supporters... we continue to hatch and distribute happy chicks at an increased rate of 10-12 dozen per week, sold at or below cost, or given to families in need.... which is not always an easy task!

NEWS! Six months ago we were able to obtain a breed of free range meat chickens “Kabir”, that are originally from Pakistan.  These multi-colored chickens (individuals come in red, back, and grey), grew incredibly fast and we were surprised to find out that they are wonderful foragers- mowing the grass like goats!  But alas, the Kabir chickens are so big that we fear they will do poorly in the hot summer months.  The birds matured a full month earlier than normal, crowing/ laying at four months and fully twice or nearly three times normal size!  We then began crossing the six Kabir hens with our largest hot-weather adapted naked neck rooster, and likewise, the six Kabir roosters were paired up with 40 of our local happy hens.  After two weeks, the eggs were ready for setting in the incuator and we have now gotten several hatchings of Kabir-cross chicks, which we are raising up to see how well they grown and lay.  If they do as well as expected, we will then begin providing them to the communities as a locally adapted, high production, free range meat chicken. Nothing remotely like them is available to the comunities of Fiji.

We have now passed the "fifteen thousand chicks" mark: all hatched and distributed, and with chicks sent all over the country, and into the Cyclone Winston hit disaster islands of Koro, Moturiki, Taveuni,and Vanua Levu. In December we will receive two trainees from the cyclone Pam disaster hit areas of Vanuatu. They will stay for two months at the farm to fully learn the Happy Chicken methods as well other things we at the training centre: chocolate, coffee, virgin coconut oil production, and permaculture. The trainees will then return to their communities to serve as resource people for community workshops and training, building local capacity, much like the women we trained at the farm are now doing on Koro Island!

We are finally able to export the chicks from the Fiji end, having passed inspection and confirmed disease free for over a year now, and hopefully we will finally be able to get the biosecurity permissions on the Vanuatu side!  If not, we will have to create breeding flocks on site in Vanuatu, as we have done in Fiji- we will .

An additional recent development is taking place in the island nation of Kiribati, where the government and communities have asked for the project.  A single hen's egg on Christmas Island costs $1.20 Australian, imported from Hawaii!  In November I had to travel to Christmas Island for coral reef restoration work, and so I was able to repond to this request. https://www.globalgiving.org/projects/emergency-response-to-massive-coral-bleaching/updates/  The trip was no cost to the Happy Chicken project, but lays a foundation for future work in a promising site, where we will likely be travelling twice per year over the next few years. While there I was able to meet with the head of Agriculture, and inspected an old incubator at his request, but it was too far gone to be used.  The plan is to bring in fertile eggs from the Fiji farm, plus a portable incubator- in June or July when I return for more coral work.  The Biosecurity import “protocols” must be developed and cleared beforehand, as must happen for Vanuatu, so we are working on that now for both countries.

While on Christmas Island, I met with a group in the London community who are very interested in the Happy Chicken project.  We planted Leucaena, a small, fast growing, nitrogen fixing tree with 40% protein in the leaves- these leaves are mixed with grated coconut and a carbohydrate source (sweet potatoes or breadfruit in the case of this island), to produce chicken feed. This planting ahead of time will help prepare for the chickens when they do come.  In addition to talking about the chickens, I gave the community a workshop on how to cook and eat banana flowers and seaweeds, as vegetables to improve the diet of the community, as vegetables are for the ot pat completely unavailable.  I also helped them start a new seaweed farm, and they taught me how to make sweet coconut syrup by tapping the unopened coconut flowers, similar to how they tap maple trees.  The workshop was great fun, and one of the participants invited me to an evening meeting in another village to talk about the work and the happy chicken methods.  She is also now teaching this community what she learned.  I will include a few photos of these activities, which are both educating the community and building a foundation of trust for the coming chicken project.

Thank you all for your continuing support, which is making a big difference and enriching the lives of poor people- building self-sufficiency and economic independence in remote South Pacific communities. 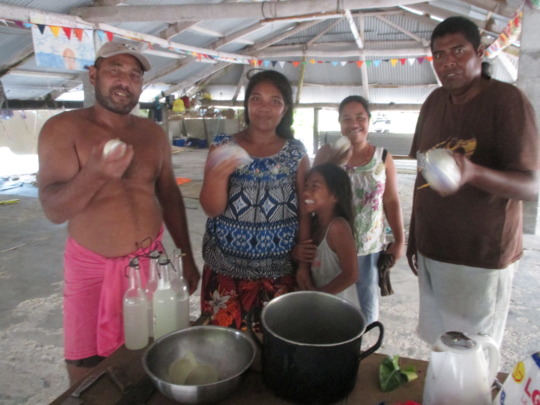 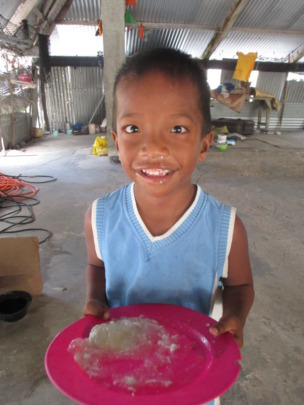 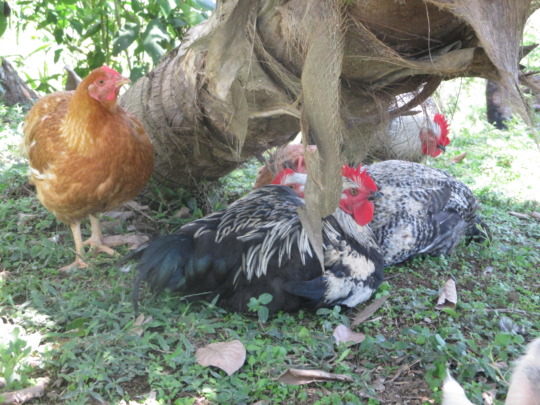 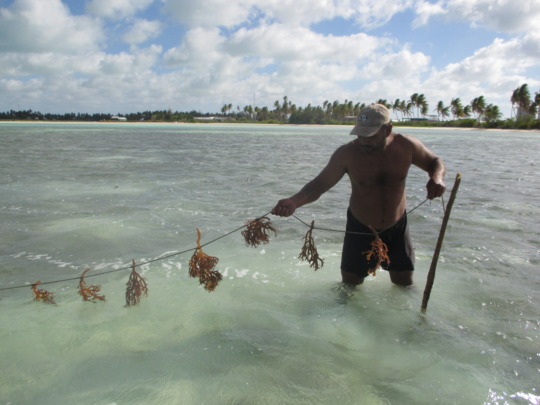 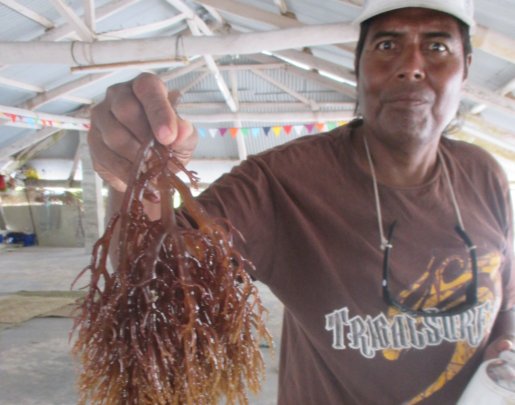 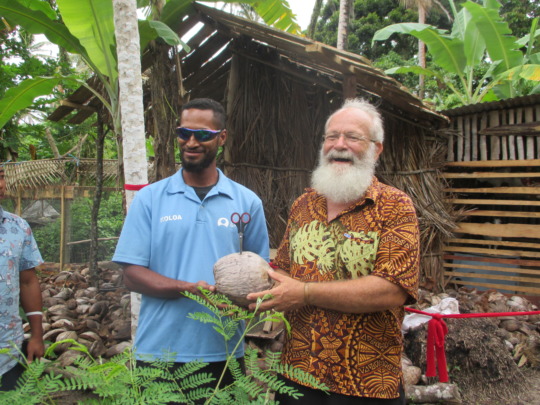 Bula (hello) to all of our supporters!

Continual progress is being made and the communities are slowly getting themselves back on their feet.  While many continue to live in tents, they do have food and clean water now. Mostly they are helping each other.  The sweet potatoes are growing and coconuts are healing and beginning to bear again.  As I reported last time, we decided to focus on food security over building materials, in order to make better and more equitable use of limited funds.

We sent materials for four mobile rearing pens, which were put together on site, and the 300 chicks we initially sent are already out foraging, and so we can send more chicks as soon as the communities tell us they are ready.  We have had to send some feed, but the communities are becomng more self sufficient as they learn to make feed out of local resources. We are now growing morniga tree seedlings at the farm- to bring to the communities soon.

Last month we sent materials for a chicken house for the Moturiki primary school, but we don't yet have enough reources to help the other three villages with this, so they are making do with damaged roofing iron and timber salvaged from the piles of hurricane generated rubble.   Koto our communtiy officer has recently viited the comunities for follow up and we will be posting that information as it comes in.

We do have a great example of a local materials chicken house, with Global Vision International, the UK based volunteer group stationed on Caqalai island (Moturiki District).  Several from GVI were trained in Happy Chicken methods five months back, and they have raised up a hundred chicks to adulthood and are now getting increasing numbers of much prized eggs.  GVI is working wih their volunteers in the communities on issues of health, sanitation, and recontuction, and we are working with them. They recently opened up their "Happy Chicken Palace", a wonderful and creative chicken house and coop, with access to foraging.  The photos show that event, wtih community chiefs invited and with me a chief guest to cut the ribbon!  Great fun and good food too!   GVI Fijian staff in particular are educated in the happy chickens to the point where they can help with problem solving and advancement in the communitie.  Kolo and Taione are particularly shining stars in the project.

Thanks again for your kind and generous support, 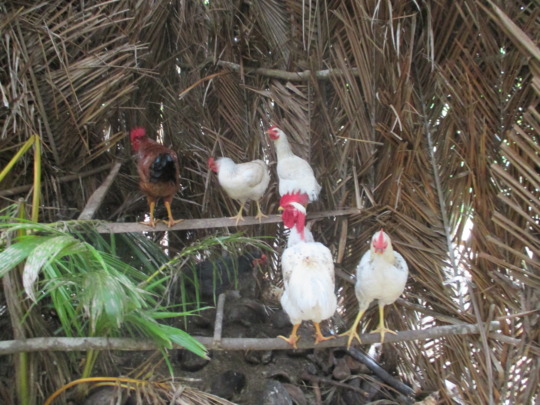 Chickens in their palace! 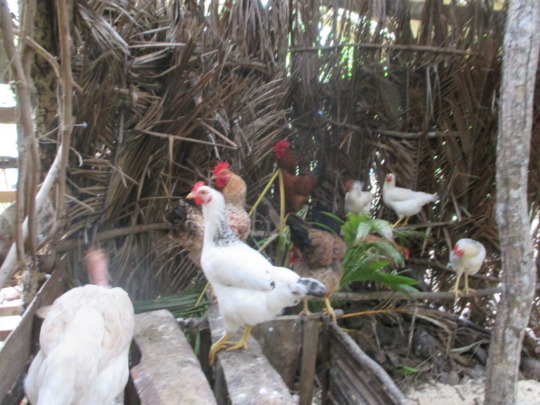 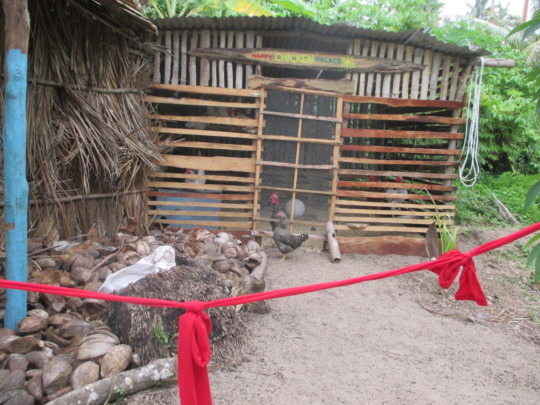 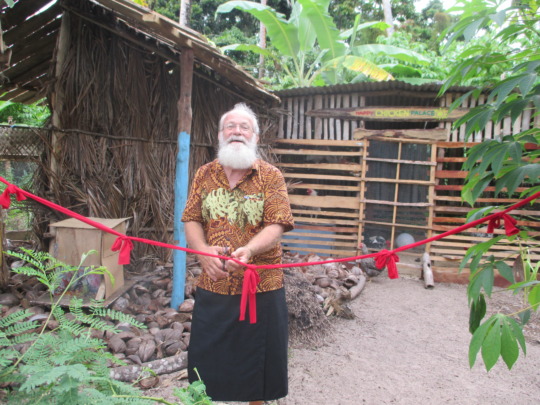 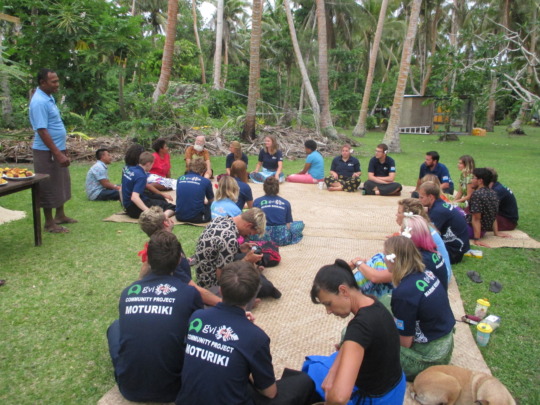 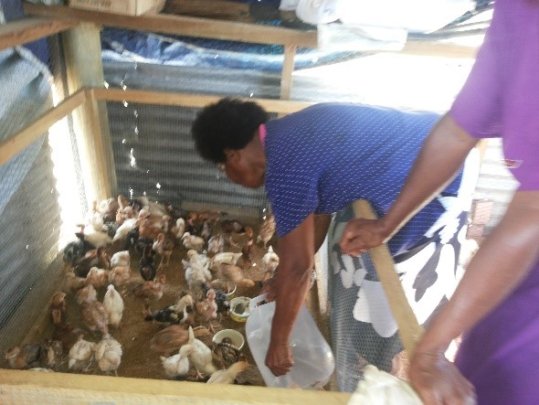 We have trained the women and they have trained groups in two additional villages. We continue to send feed to the island as the cyclone damage has destroyed all the coconuts and other crops. This unedited report is by Simi Koto, our project officer, who is following up. Carissa the Peace Corps Volunteer has now been replaced by the new PCV Thea!  It is wonderful having the support of these young people!

I visited the villages of Nabasovi and Navaga on Koro Island from 3 – 5 October 2016. The purpose of the visit was to follow up with the two women’s groups that are over-seeing the happy chicken’s project and am happy to advise that they are doing well despite the challenges. The Happy Chicken concept is a new one as they are used to the old way of raising chickens and it will take time for them to fully understand and implement it. However, support from Peace Corp volunteer, Charisa has assisted the villagers in their efforts to re-build their lives.

A Government Agricultural officer with the support of a local hotelier assisted all eight villages in Koro through the provision of 100 layers and chicken feed. The visit was timely as he shared the reality and challenges of life the villagers experienced following the devastation of TC Winston. The focus is now to build stronger houses and provide food for their families. Natural resources have been greatly affected and in this regard, the villagers have been encouraged to rehabilitate coconut trees in collaboration with government.

Vegetation was severely affected on the eastern and northern parts of the island. These included Nacamaki, Nasau, Nakodu, Mudu and Kade. Strong winds battered these villages together with strong winds and tidal waves at the height of the cyclone. Since then, all villages have been advised to relocate to higher ground before building their new homes. Many families are still living in tents and makeshift shelter. According to local fishermen their reefs and coral have also been adversely affected by the cyclone. Debris such as roofing iron, timber, and household items from the villages has also had an impact on the reef.

I was able to meet both the women’s group on two separate occasions. At Nabasovi, work is slow to progress due to the lack of support from the men. Only a few women are taking part in managing the chickens and the project could move faster if more women supported and participated. The chicken fence needs to be enlarged as the chickens grow as they go about looking for food and return to their chicken house. On the other hand, the project at Navaga is progressing well as the women are committed and support each other well. They look after the layers and the Happy Chicken side by side. Lessons learned are that layers grow faster than the happy chickens. Support from the men and Turaga-ni-koro is good with men helping to build bigger fences for the chickens when needed. More chicken feed will be needed as Navaga relies on chicken feed from Nabasovi villgage. 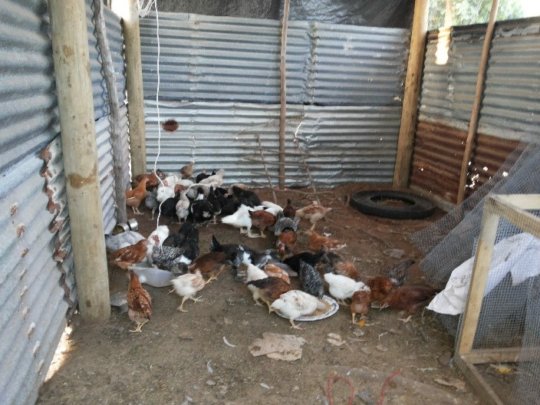 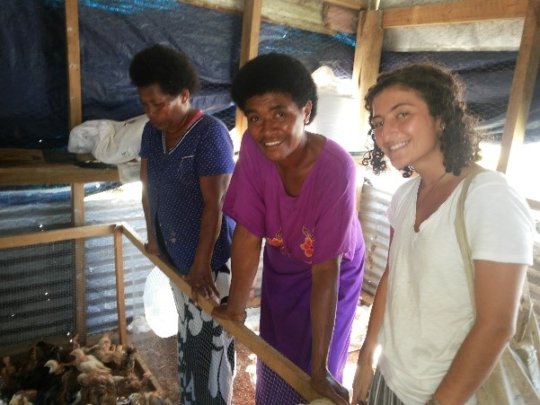 Carissa our PC volunteer with the women 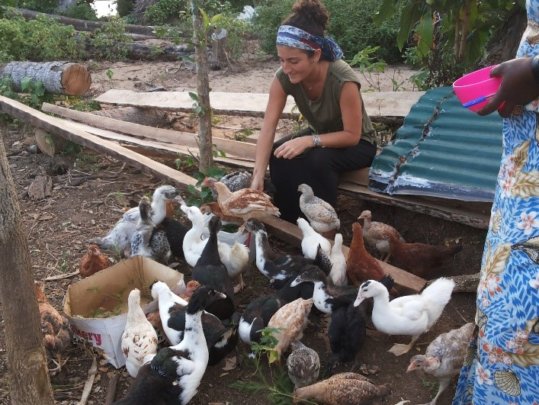 Carissa we will miss you! But welcome to Thea!
‹ 1 ... 11 12 13 14 15 16 17 18 ... 22 ›
WARNING: Javascript is currently disabled or is not available in your browser. GlobalGiving makes extensive use of Javascript and will not function properly with Javascript disabled. Please enable Javascript and refresh this page.