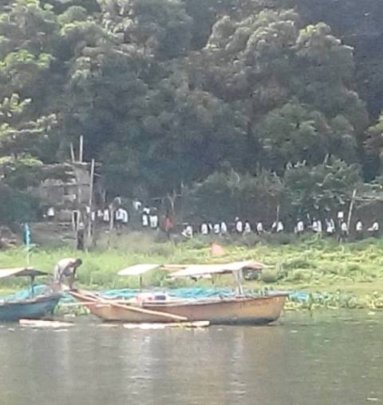 How the power supply affects the community

The people of Talim Island were used to frequent brownouts and fluctuation of power supply, affecting the entire island’s livelihood and domestic necessities. One can only admire the people’s readiness during these circumstances. They easily adjust to the situation when the power supply runs off. There are deep wells for an alternative source of potable water, firewood for cooking, and gas lamps to light their homes.

On the other hand, merchants have taken advantage of the situation. They bought lake commodities for less than the actual market value. But that is more essential because of the unavailability of cold storage for their catches.

Internet access is an advantage to students in mainland schools compared to the island. School buildings in every barangay have provisions by the local government. Here, they rely only on books provided for them as research materials. Fortunately, the students here are focused on their studies and other school activities.

Not all barangays in Talim Island have their own school. At least three or more share the same school grounds. Since the island is composed of lake shores, up-hills, and forests, the students walk thru trails with boulders of stone along the lakeside and others crossed the rugged up-hills.

In the 1970s, the entire island was equipped with a floating clinic, with a doctor and health aid staff. They would rove around servicing not only the sick but orienting the healthy on how to prevent sickness. Unfortunately, for whatever reason, the floating clinic was abolished. That was merely assessed as a political decision.

As of now, there is only one small hospital located in Barangay Subay, but not sufficient enough to do the hospital operations. There have been many reported incidents wherein patients died during their way to the hospital, travelling by boat.

With the help of the Department of Health (DOH), a possible Dengue outbreak was prevented by giving full Dengue vaccinations to schoolchildren. Dengue is a very common illness during the rainy season. The DOH also encouraged the inhabitants to plant root crops, vegetables, and fruit trees, and reaped whatever they sowed. Feeding programs have been also of great help as much as the medical missions.

The natives of Talim Island are mostly Catholics. The annual thanksgiving festival is held every 29th of June. Since fishing became the main source of living, they believe that they could get a good harvest for a year if they celebrated the feast of St. Peter, the patron saint of the fisherman.

Ang Misyon continues extending their magnanimous support through Global Giving by giving free music lessons and free snacks. The attitudes of the Orchestra of the Talim Island Youth’s members have positively improved if compared to the time we organized the group, when they were full of fear & insecurity. We have infused self-discipline, boosted their morale, and continually teach the children how to dream big. We are looking forward to more moments when we can change another child’s life! 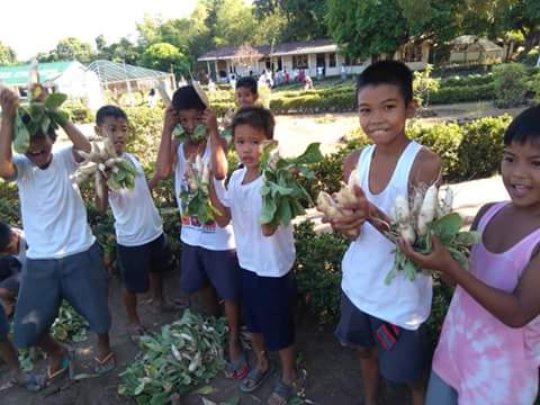 Planting is for Good Health 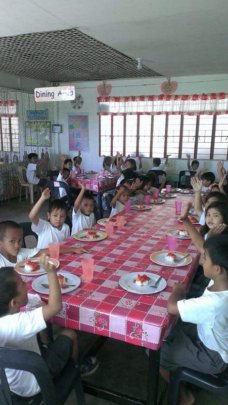 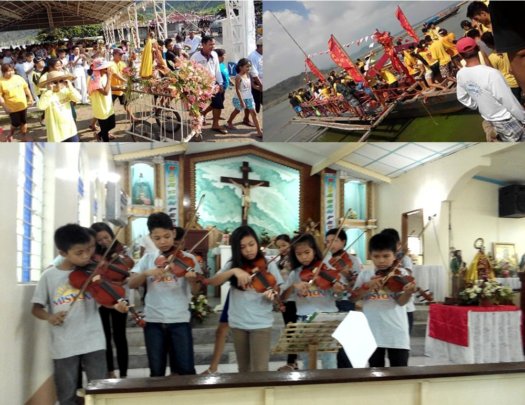 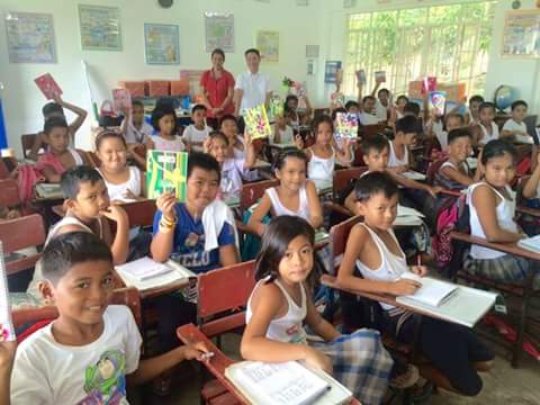 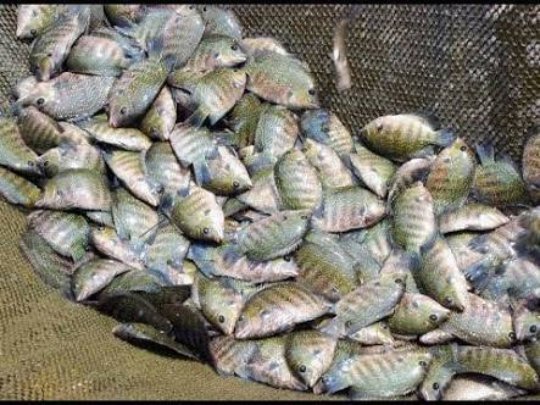 Know more about TALIM ISLAND
Talim Island is extremely rich in resources that can sustain the natives of Talim Island for a lifetime. But can it be utilized properly without the technical know-how? Aquaculture in Laguna Lake attributes the largest resources in terms of income, employment and livelihood. To attain its full potential, every person who is engaged in this business must know the economic analysis and severity of problems that will be encountered during the process, like water pollutants, occurrence of storms, and numerous environmental aspects. This industry is the most profitable business and economically important to the community.

Bamboo Crafting
Several opportunities may adhere to the natives of Talim Island. If only everybody had the motivation to cultivate their talents and skills. Information and training must be infused and it is of great help. There were Non-Government Organizations who attempted to invest, but for a very short term only, maybe because of the factors affecting the business. One cause of failure is the fluctuation of electricity wherein the power supply automatically shuts down whenever the wind blows at maximum. The other is the availability of transport services and the possibility of the unforeseen event that will happen during the course of crossing the lake to the mainland.

Tourist Destination
If you happen to explore Talim Island, you can go hiking and climb the peak of Mt. Tagapo, also known as the “susong dalaga” or the “maiden’s breast” mountain because of its conical shape. It is approximately a two-hour trail walking through the island’s bamboo forest. When you reach the peak after trekking, you will be rewarded with the panoramic view of Laguna de Bay and the cities that surround it.

Long term support
The Orchestra of the Talim Island Youth is now heading towards two years of existence, with the continuous support of Ang Misyon and GlobalGiving's magnanimous donors. Each member assimilates new music knowledge with the help of teachers provided by Ang Misyon. They also experienced how to perform in front of huge crowds when they joined the annual Satellite Showdown, showcasing the performance of 12 satellites of Ang Misyon last November 30, held at the Metrotent Metrowalk in Pasig City.

The same month, Ang Misyon distributed jackets and blankets to all the members of the Ang Misyon Talim Island satellite as Christmas gifts, in anticipation of the weather condition of Talim Island during Christmas season.

Many admire the advocacy of Ang Misyon that they volunteered to share their knowledge to the members of the orchestra, by joining our weekly lessons starting last January.

Extension of support
Recently, Ms. Tinky Cruz, managing director of Ang Misyon, donated hundreds of her old books for the community, beneficial as research material for the students in elementary and secondary levels. There is very limited access to the Internet in Talim Island compared to the mainland.

Spotlight on Ezekiel: A Musician at Heart
Ezekiel is the third among the four siblings of her parents. Her father is a family driver in Manila, supporting two college students in the mainland and two elementary students in the island, including Ezekiel. She graduated from 6th grade last March 31,2016 and considered as the most improved member of the Orchestra of the Talim Island Youth. She is very good in sight-reading notes, excels in every lesson, and attentive on every piece assigned to her. In December 2014, she was eager to experience her first Satellite Showdown. The night before the performance, Ezekiel volunteered to remind the members of their departure time from the island. Unfortunately, the boat left without anyone noticing her presence until they arrived at the wharf. She was left behind and spent the entire day in tears. I was informed that she was scolded by her mother and was even slapped because she came home late for dinner that night, having forgotten the time due to her despair. She was thereafter prohibited to go with her co-members. But later, I talked to her mother about it to instead be proud because Ezekiel could have a very good future in music, and eventually she conceded to allow her to continue participating in the program. Currently, she plays in the 2nd Violins section and after school she teaches her co-members as well. She was a recipient of a brand new violin from Ang Misyon. 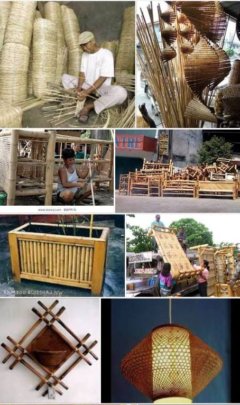 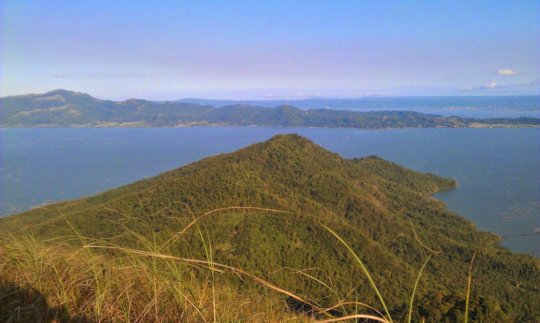 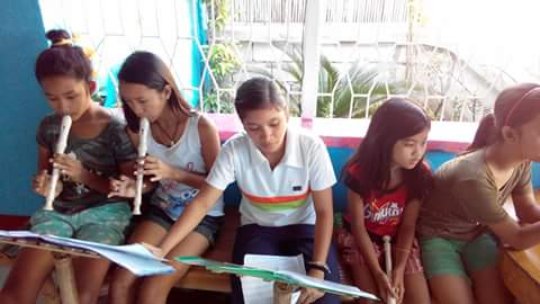 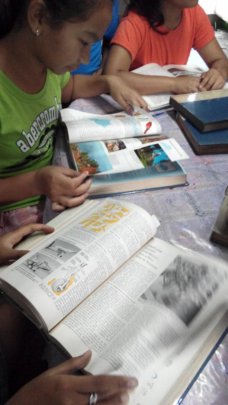 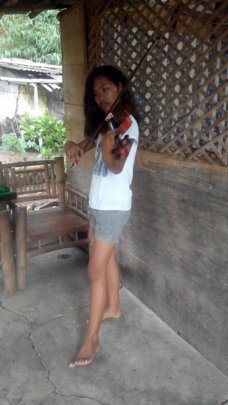 "BUILD IT & THEY WILL COME" 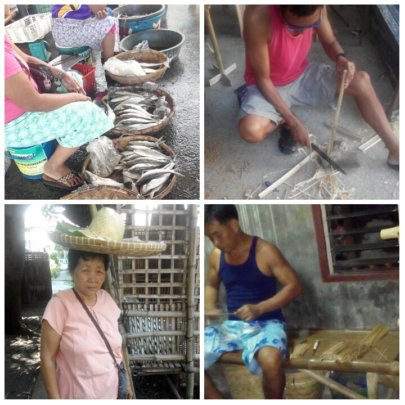 Not so long ago, Laguna Lake basin was so abundant with different varieties of fish. It was like a fish sanctuary. Everyday a fisherman could utilize its bountifulness, using only a fishing rod or a small fish net. Some put up a “baklad” or a fish trap using bamboo poles and nets. A day catch was more than enough to sustain their daily needs for food clothing and other basic needs.

In the 1970’s a corporation who engaged in fishing infused from mainland, introduced culturing Bangus (Milkfish), Tilapia, and Carps. They offered employment to the native fisherman as fish pen guards. They barricaded a vast area of Laguna Lake covering the entire fishing area. The Laguna Lake Development Authorities (LLDA) permitted them to put hectares upon hectares of fish pens. It turned out to be more productive. A seasonal harvest produced tons and tons of fish, which carried supplies to the nearby municipalities and Metro Manila.

But not all the islanders benefited from this opportunity of employment. This was the time when people started to look for an alternative source of living. As the fish pen industry boomed, the demand for bamboo began. Instead of fishing, the people supplied those fish pen owners their needs in order to construct fish pens. Indigence increased among even those in the island who could afford to put up their cages (smaller than fish pens). Others found their luck by working overseas like Saudi Arabia as construction workers or labourers, while others with less fortune ended up in factories and local construction sites.

In March 2014, Ang Misyon – the largest El Sistema inspired program in Southeast Asia - adopted Talim Island as one of their satellites. They fully extended their helping hand to indigent children of Talim Island by giving free music lessons. Instilling in them that somehow, by becoming a musician, their lives will change in anticipating the best possible future for themselves and the next generations.

We are a year and a half now, while Ang Misyon provides music teachers, free meals, and transportation, indeed these children have changed immensely, from being dreamless to becoming dreamers with hope. Nowadays, if one asks them what profession they wanted to take up in the future, they will proudly reply “I want to be an Engineer”, “I want to be an Accountant”, or “Someday, I want to be somebody”.

With the long-term support of Ang Misyon and Global Giving, probably no more children in the entire island will be doomed to illiteracy.

THE ORCHESTRA OF THE TALIM ISLAND YOUTH

The Orchestra of the Talim Island Youth (OTIY) is now comprised of 35 youth members aged 9-12 years old. They have been undergoing regular lessons and rehearsals. Ang Misyon has provided three music teachers to concentrate on strings, winds, and percussion disciplines.

The OTIY were very thankful for having been through places they’ve never thought they would have ever stepped in like the Cultural Center of the Philippines, or the Ang Misyon headquarters at the Benpres Building in Pasig City where they attended workshops with the New York Philharmonic Teaching Artists. Some of our kids are now back in school by availing of the academic scholarships and monthly allowances Ang Misyon has provided them.

Last November 30, the OTIY performed at Ang Misyon’s “Satellite Showdown 2015” which showcased performances by the twelve different satellites of Ang Misyon from all around the country. From the island, they travelled by boat for 2 hours, and an additional 2½-hour Jeepney ride from the fishing port to the concert venue at the Metrowalk Metrotent in Pasig City. They represented themselves so well that they received a rousing ovation.

HOW THE ORCHESTRA AFFECTS THE COMMUNITY

As the children transformed from being indigent unknowns into legitimate recognized classical musicians, the people in the community specifically the parents of the children, were amazed by the program granted by Ang Misyon. They emphatically noted that aside from the awareness of the importance of education given the children, it is an education that transforms their lives into one with values: modifying their outlook in life, altering their way of living from an unconfident person to a person of perseverance. Despite all the difficulties in life, the parents have pursued their children’s education with the hope that someday, they will be the ones to help others as Ang Misyon does.

Come, join the mission, and help us transform someone else's life through Classical Music! 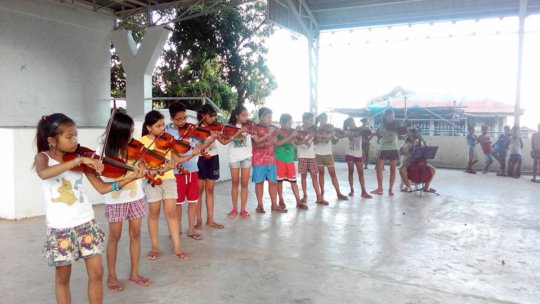 Preparing for the Satellite Showdown 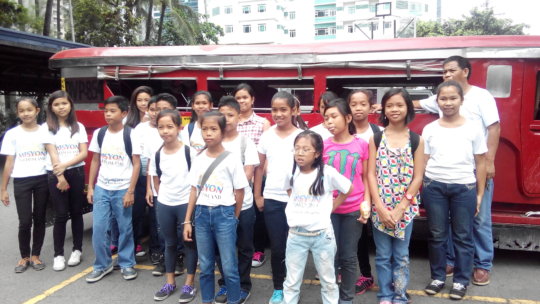 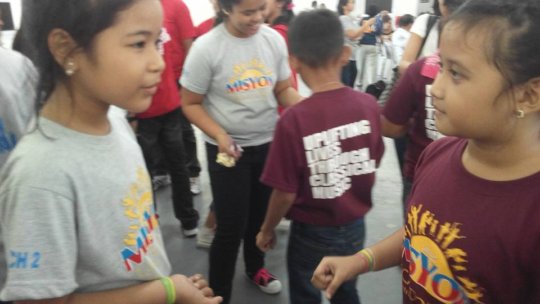 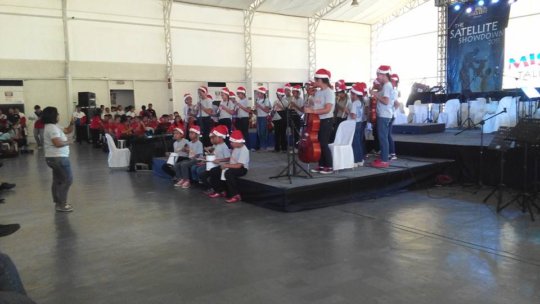