Plant a tree, give life!! 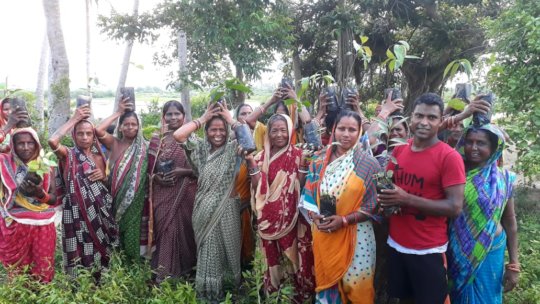 Millions of trees were uprooted, post Fani, which not only caused massive loss of life and property but also posed adverse long term affect on ecosystem and people's livelihood .

In continuance of its effort to rebuild Odisha, Aaina launch a plantation drive in Nimapada and Bramhagiri block in Puri in colllaboration and support from "Sambhav". We collaborated with the respective village committees to organise village wide plantation drive . The saplings, planted were:

The objective of the pantation drive was to help the ecosytem recover and provide resource and livelihood to the netizens.

Rural women and people with disabilities remain excluded from economic participation in many ways. Formation of Self Helf Groups is a major approach used by Aaina to facilitate target population work as a single unit with greater bargaining power.

Aaina has organized a training on goat rearing in Ganjam in collaboration with SEWA (Self Emplyed Women’s Association), in Ganjam.

Aaina had conducted training on organic farming in SAMBHAV, Nayagarh and 2 women from this village attended this training. They were highly influenced and took initiative of organic farming as they have land and there is irrigation facility nearby. During the month of November 2018 both the women started cabbage and bitter guard cultivation in their own 1 acre land. By the end of January 2019 they got Rs 20,000 as profit, they will receive another 20,000 each by the end of February.

Currently we are discontinuing with the current project, just to relaunch this initiative with a new objective and scope. We plan to incorporate financial and digital skill building of women and PWD. 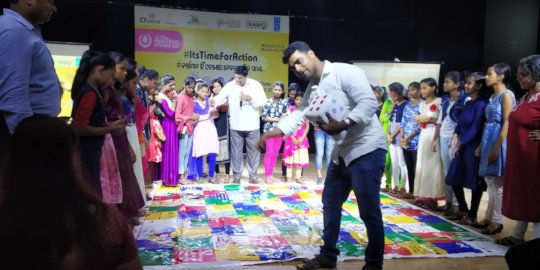 Early Child Marriage is undoubtedly the worst crime that is committed on a mass scale. In many communities, we work with, the ideal age, at which girls are married off, is actually the age from which she starts menstruation. As per a baseline survey conducted by Aaina, in Bellaguntha, Bhanjanagar and Chatrapur block of Ganjam district of Odisha, we found out that about 6 % of school teachers and 20 % of caregivers actually believe that menarche is the biological indication of as girl being ready for marriage and child bearing.

Aaina therefore believes that menstrual myths, like these are a major reason for child marriage.  Also, being a least discussed and associated with shame and impurity, Menstruation is one of the most misunderstood phenomena, not because, there are no scientific explanation to it but because it is not allowed to be discussed on any platform. The unnecessary secrecy and hiding results in tons of myths and unethical practices surrounding it. The mere biological process has been transformed into a biggest tragedy and nightmare for young girls.

Post Fani, Aaina has been rigorously involved in Health, sanitation and personal hygiene of the affected communities. On 28th May, The Global MHM day, Aaina decided to observe the occasion with adolescent girls from slums, throughout Bhubaneswar. The Program was designed to discuss the undiscussed and challenge the myths and malpractices through a rather innovative method.

We let them play a life size Snake and ladder game that was tailor made to address major myths and malpractices. The players threw the dice and took the steps on the chart with myths and facts, imprinted in the boxes of the chart as messages. For every myth, they encountered, they would take two steps back. We saw much enthusiasm among the players and our audience.

We plan to take this exercise to other districts, like Ganjam and Puri and involve more adolescent girls and adults. 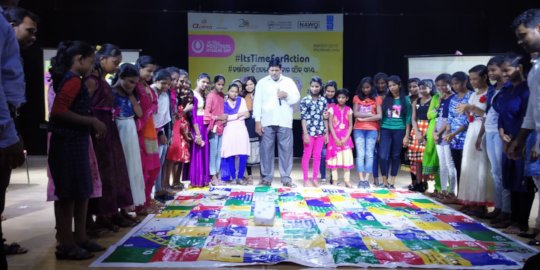