From Gangster to Graduate 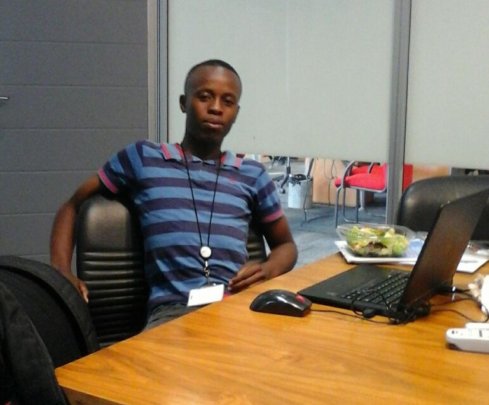 Tsepo was born in the rural town of Matatiele in the Eastern Cape. In 1997, when he was only 4 years old, Tsepo moved to Johannesburg to live with his grandmother who was a domestic worker. However, when Tsepo’s grandmother had to stop working and could no longer afford to take care of him, Tsepo was forced to move to Nkosi’s Haven – a children’s home. There, Tsepo was desperate to find a family to replace the one he just lost and worked hard to fit in with his peers. Unfortunately, he fell in with the wrong crowd and this meant embracing the gangster life of drugs, alcohol, and violence.

Sadly, Tsepo’s story is not an uncommon one among South African teens. Youth violence has been a normal occurrence in South Africa for decades. Gangs target children for recruitment because the children are eager to prove themselves and are not subject to harsh punishments when caught.

But Tsepo's story does take a turn for the best!

Eventually, Nkosi’s Haven introduced Tsepo to Infinite family and he matched with a mentor in 2006. Through his mentor, he learned about the importance of goal setting and how to make large projects less daunting by breaking them up into smaller tasks. Tsepo and his mentor worked hard to focus on the positive things and people in his life instead of his daily struggles. He looked up to his mentor as the older brother and family he didn’t have growing up. He described his time with Infinite Family as exciting and said,

“To know there were people from across the globe that wanted to visit with us through these weekly video sessions at the computer lab…that they cared enough to want to talk with us and get to know us…that made me feel important.”

Tsepo believes that he might have given up on his goals if it had not been for the support and guidance of Infinite Family. He is proud to say that he has already achieved one of his goals – passing his matriculation certification exam and with high marks as well! He also gained admission to Wits University, but cannot attend this year because of financial challenges. However, he isn’t going to let that get in his way and is working diligently to secure a scholarship and working part-time jobs. In fact, we believe so much in Tsepo, he is currently working part time for Infinite Family! We know that sometimes, all it takes is for someone to believe in them for South African teens to start becoming resilient, resourceful, and self-reliant.

We want to thank our donors and mentors everywhere for your support that make it possible for successes like Tsepo’s to exist. Tsepo’s relationship with his mentor shows that you don’t need to be in the same room to make a difference in the lives of South African teens.

Alfred, born and raised in Alexandra Township, Johannesburg is a remarkable example of a young man taking advantage of every opportunity to improve his skills and his prospects to build a better life.  Most of Alexandra's teens drop out of high school before 12th grade because, frankly, they haven't seen anyone benefit from continuing to go to school.  The adults in their lives don't encourage education and so the generational cycles of poverty and violence continue.  An area originally created for 70,000 residents is now believed to house four or five times that number.  People move in, often from nearby countries, but rarely gather the means to move up to a better, more stable live.

In 2009 Alfred saw an opportunity and seized it:  He became an Infinite Family Net Buddy to learn from an adult living somewhere else in the world.  While his first Video Mentorship only lasted a year, he found a long-lasting mentoring relationship with Jennifer, who lives in the southern state of Alabama, United States.  His British English accent made her laugh, her seemingly relaxed southern drawl soothed him and helped him gain perspective.  For more than five years Jennifer has guided and helped Alfred find his strengths and voice.  His progress was so impressive that when Infinite Family needed a new manager for the computer lab, they turned to Alfred because he was always there, always helping the younger students, and always ready to learn something new.  Although he was younger than most lab managers, Infinite Family knew they could depend on Alfred to always give the role his best and to continue making the LaunchPad a more inviting place for new Alexandra students to come to learn.

And now, as of June 7, 2017, it is with great pride and joy that we announce Alfred's graduation from college with a degree in Tourism (a booming industry in SA and a wise choice!).  We are already providing strong references to other potential employers and know he will be an incredible asset wherever his talents take him.  We know it is our job to prepare South Africa's teens for self-reliant lives and jobs outside of the townships - this is our key measure of success and we know Alfred will go far.  But we will miss him dearly, his positive attitude, his constant willingness to help whatever the task, and, most of all, his engaging smile, which brightens every day.

Thank you to Alfred and Jennifer and congratulations on the bright future you have built together.

Thank you also to our wide network of donors who support video mentoring scholarships that make each and every mentorship possible throughout each teens' critical teen years.  No one can walk a teen's turbulent journey alone and just one caring adult half a world away can mean the difference between dropping out, or digging deep and working toward long-term success.

We hope you will choose Infinite Family as your grantee of choice during Global Giving’s Rewards Day on July 12!  Thank you. 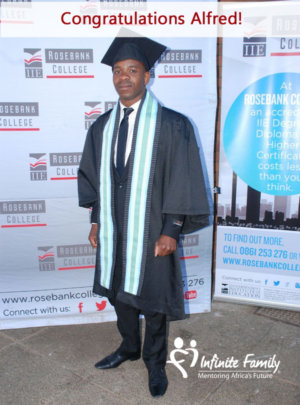 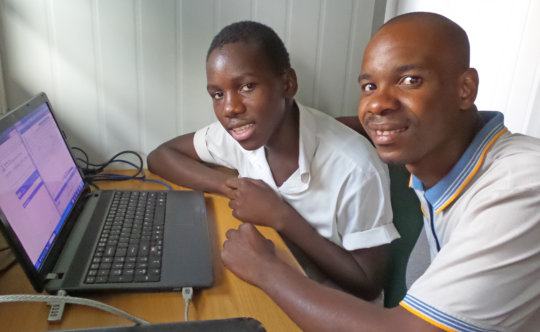 Searching what to study to become a pilot

Infinite Family is pleased to introduce you, our generous supporters, to the first class of new Net Buddy mentees beginning their journey to self-reliance in March 2017! These 22 Net Buddies are 13 and 14 years old and have just started 8th grade in the rural village of Phola, Mpumalanga. Phola is located 90 minutes to the east of Johannesburg in the middle of South Africa’s coal mining region. Phola’s dirt roads are precarious and full of potholes. Chickens roam the school grounds. The nearest town is 30 minutes away. I share this information as background to the ambition of several of our new Net Buddies.

The closest these young teens have ever been to an airplane is 9,000+ meters, as they have squinted their eyes to see them fly overhead. Yet, in their early Internet searches, even before being trained and connected to their own Video Mentors, they sought information on what they should study to become pilots themselves – girls and boys alike! We applaud their ambition and will accompany their journeys for the next 5 years until they graduate from secondary school and most become the first in their families to attend college/university.

We are so excited to be connecting these 22 ambitious students (a career as “engineer” is an even more frequent future job goal) with Video Mentors worldwide to guide them. Your support is allowing them to begin their challenging but very rewarding work together. Thank you! 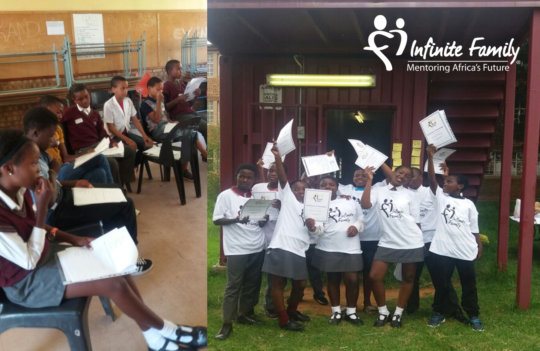