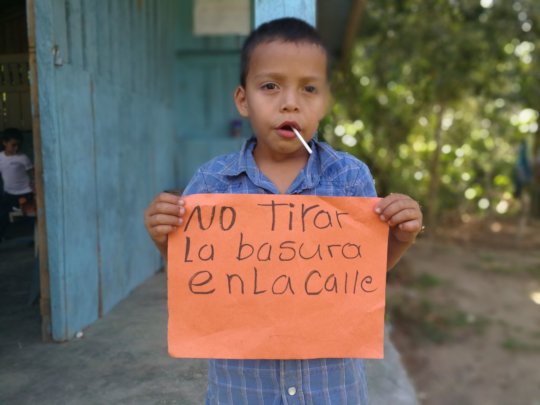 "Do not throw garbage in the street"

A few days ago, a campaign was launched under the slogan "Without garbage, we will have a better quality of life", where children from 9 schools of the sector participated, who received training on the three "R's" (Reduce, Recycle, Reuse).

Each child created his own message, which was located in different points of his community, in order to create greater environmental awareness in the population.

In the image, we can see read the message of a child: "Do not throw garbage in the street"

After the launch of the campaign, we have listened to the following testimonies:

Our children have given an important message to adults. They have taught us through their campaign, that a clean community is more beautiful and splendid. And that water sources reduce their pollution.

After the launch of the campaign, we have been able to observe better control and recycling of garbage. And we have come together to beautify our community. And, above all, avoid pollution. This type of educational campaigns only shows that with little you can do much.

After listening to these testimonies, and looking at the changes, we believe that education is one of the most important pillars that bring sustainable changes. Therefore, we will continue to bet on including pedagogy as a transversal axis in our programs.

We want to thank you for being part of our success, and for continuing to believe that together we can create change. Show our story to your friends and invite them to be part of our work. 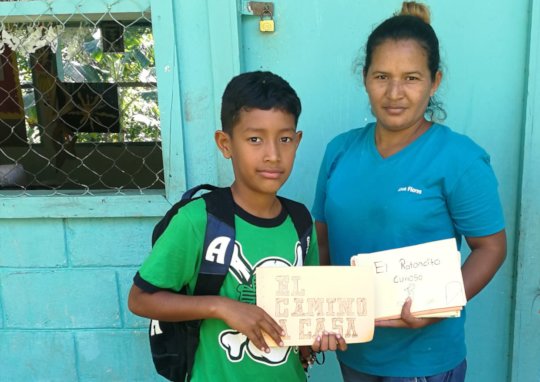 Reading has no limits in our program, and we reach all those communities isolated from the road in order to promote the habit of reading, improving educational quality, analytical, constructive criticism and change.

Our story today tells the story of a 10-year-old boy, who fell in love with reading, and who today has become a reading promoter to tell the magic that this addiction has made in him.

His passion is so great, that he dedicates himself to the production of unpublished books with small narratives that captivate the attention of children, young people and adults. Their stories travel through all the communities of the Cangrejal River basin sector, and together with other friends they are able to awaken the curiosity and imagination of more children.

At his young age, he tells us the following:

"Before I was bored reading, but after entering the program that drives Un Mundo, I learned to read and write better, then I was passionate reading, and now I need to have a book in my hands. I have learned to lose the fear of speaking in public, of relating to others, of understanding things that were difficult before. Today I can say that reading makes magic "

As well as this history of change, there are many more, and that has been thanks to the friendly hand of many people like you, who have joined our dreams. Dreams that are now a reality.

For all these achievements, we invite you to continue supporting, and to invite new people, so that together we can transform the lives of many more people and achieve a significant and sustainable change in their lives. 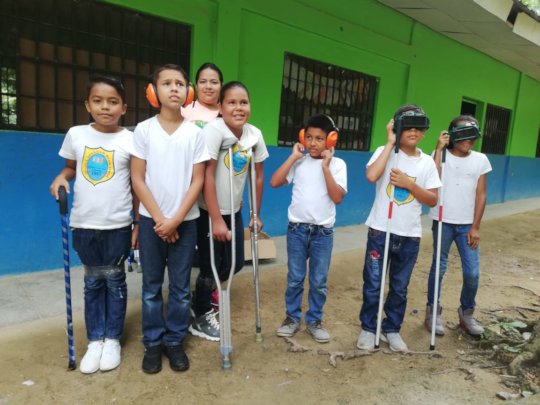 One thought says: "The greatest disability of a person is that which is in the mind"

With this in mind, we worked on an educational program for children in schools in the theme "Inclusive Risk Management and Disasters in Disability and Older Adult".

In this story, we introduce you to six children who dramatized different disabilities, guided by an expert in Inclusive Education. The purpose was for each child to be able to interpret and understand each disability, and how to be inclusive.

Below, you can read some of the testimonies of these children:

Before I laughed when I looked at a disabled person, and today I understand that that person has the same values, dignity and dreams, that all of us.

-Family of the image

Nobody is far from a disability, today we can be outside of it, tomorrow we can be inside. That is why we cannot be indifferent and selfish before this situation.

-Family of the image

Our program will continue transforming lives, breaking paradigms, creating awareness, and above all offering better living conditions. To make these dreams come true, we need to continue to have their collaboration and support, and to be able to spread the word to more people to make all our expectations come true.