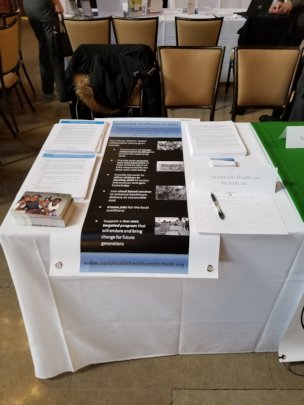 Our Booth at the Conference

While our regular activities continue in Haiti (We are in the process of constructing the clinic building, the expanded water filtration system that can also serve the community for a fee is being installed, and we are providing weekly healthcare and education to our 90 children), we have been pretty active at our home base in Boston as well.

Over the past few months, Board members have attended conferences in the hope of recruiting new Board Members. Our progress both in the area of construction as well as programming means more work for our volunteer Board members and we hope to find others who are interested in joining us.

We also presented at an Engineers Without Borders conference at Harvard. The conference itself was about learning from failure and this allowed us to give some deep thought as to what we've accomplished but also what we have not accomplished over our ten years in existence. It was also very helpful to attend the seminars and learn from others who told stories and gave analysis of failure. We were most profoundly struck by the students in the audience, though, and their desire to understand how to be global citizens with compassion and kindness while forging change and ensuring progress.

And finally, we presented at a career day at a local high school. This event brought us two high school seniors who were interested in interning for SHH for a month. (The school has an internship requirement of all seniors.) Since SHH is an all-volunteer organization, these students brought us much needed administrative help as well as some social media savvy.

A quick update on Christa- She has been fitted with her prosthesis and is working hard in therapy to learn to walk. She looks amazing and her smile brings us all to tears.

Our big announcement is that we have chosen a date in September of this year for the dedication of our new building to be named the Sho-Ping Chin Clinic for Healthcare and Education in memory of one of our co-founders who died in June 2016. We have a full day of activities planned. We welcome all donors to join us. Please feel free to contact us directly if you would like come. 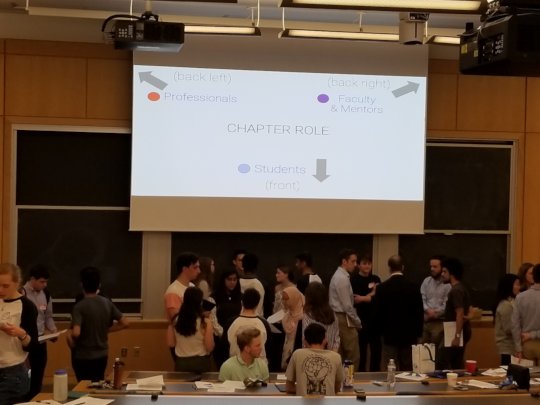 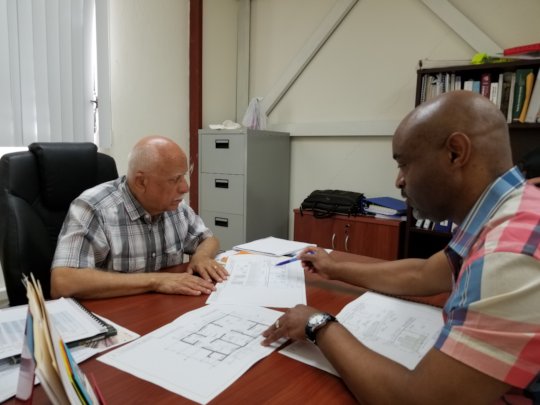 The title of our report this quarter matches perfectly with GlobalGiving's Spring Campaign "Little by Little" scheduled for April 9 - 13th in which small donations will be matched at 50%.  This quarter we are reporting on small steps for our organization as well as some of our children.

Crista, who had a club foot and underwent surgery in November, had a severe post-op infection. A short time later she had more surgery to amputate a portion of her foot. Fortunately she kept a part of her foot including her heal. She was then transferred to another hospital to manage her wound care and ensure there were no further complications.

During our trip ther ein February we were happy to hear that she was scheduled to be release at the end of February, and PoumonTEK will be bringing her to the Dominican Republic for a prosthesis fitting. She will soon be taking small steps without any assistance. We hope that our donors and friends will consider donating to the Little by Little Campaign to help us offset the costs of her surgery, prosthesis and physical therapy.  More to come on this.

Our team took another small but significant step forward when we met with the owner of Tecina, the General Contractor who is building the Sho-Ping Clinic for Healthcare and Education, and is also the father of one of our Board Members.  Small, but fun details were discussed to wrap up the design phase. Haitian iron work will be added and serve a dual function of design and security. The children's art work will be incorporated into the building using their rainbow colored designs on the louvers. And the walls will also allow for actual murals to be painted by the children in the waiting area.

We visited Fondation Montesinos as well, where some of our staff played against the children in Basketball. The children not only beat us, but they have been winning in a league that Father Charles has set up for them. They play in the New Sports Arena nearby and have already collected many trophies. Basketball is played by both boys and girls and is integrated into the Sports Medicine and Nutrition program. We also brought hundreds of eye glass frames collected by one of our Board Member’s children in the USA to Mission of Hope Optometry Clinic in Titanyen.

Our Water Engineer has been researching new technologies and recently reported that he found a way to save us enough money so that we can now afford to put in a pipe that runs down to the roadside building. Fondation Montesinos can sell water to the community thereby making our system a sustainable installation with income covering the costs for electricity, filter changes and routine maintenance.

And finally we completed the last steps to becoming a registered Foundation in Haiti which will be called Enkourage Sante Pou La Vie.

Back in the US we met with several other small non-profits operating in the Boston area supporting Haiti. We all agreed to take the first steps toward forming a consortium which will support all the organizations and allow us to share resources such as a car in Haiti as well as container shipments. Our first fundraiser, Flowers for Valentine's Day, was an exciting first step for our fledgling group.

For those in the Boston area, we hope this latest storm will not keep us inside too long and soon we will be hearing and seeing signs of Spring, So… Happy Spring to all. 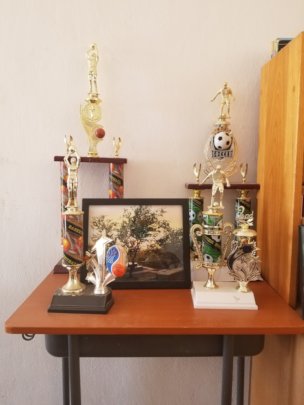 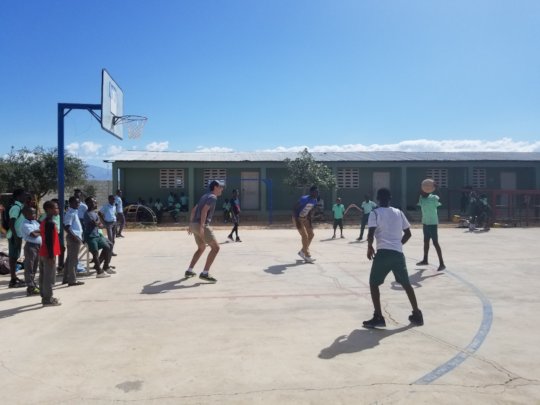 SHH vs FM, a nail biter! 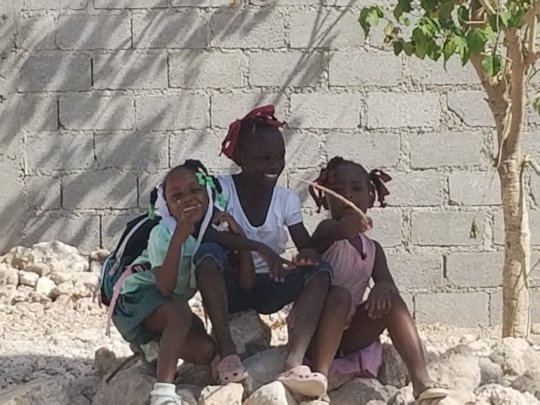 Girls in the Shade 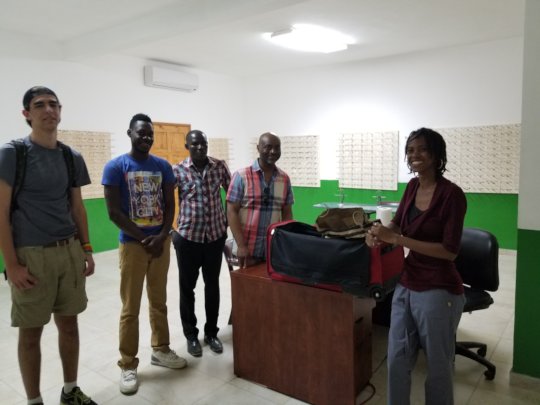 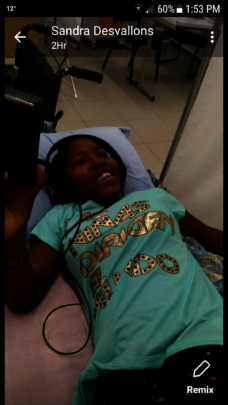 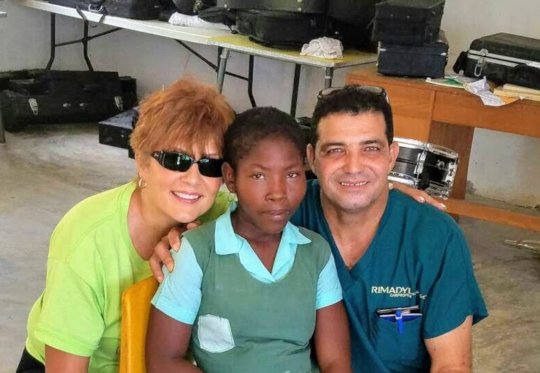 Crista with Sandra (PoumonTEK) and Surgeon

This past month took a few twists and turns for Sustainable Healthcare for Haiti. Our main focus for the end of the year was fundraising. We held a few events and, of course, participated in the GlobalGiving's GivingTuesday Campaign.

One event in particular allowed us to meet many new friends, The Massachusetts Conference for Women. Attended by thousands, we had a booth that was stocked with Haitian art as well as children's toys for sale, donated to us by Crocodile Creek, a local toy distributer. This meant 100% of sales went directly to our bank account. Giving Tuesday was also a fun day as we heard from many supporters and friends from all around the world. We are grateful for all of your support and donations.

We are also extremely excited to report that we are planning for a milestone in our construction on the Sho-Ping Chin Clinic for Healthcare and Education in February 2018. Thanks to additional funds raised on GivingTuesday, we will be able to install a water filtration system that allows Fondation Montesinos to sell water to the surrounding community. Not only will there now be clean water for the children, the students who attend the school and their families, but also for the community. And, via this sustainable means, Fondation Montesinos will have a new source of income!

There will be much more in our next report on these endeavors.

Unfortunately, though, in the midst of GivingTuesday, we got reports from the hospital in Haiti where one of our girls, Crista, had gone for club foot surgery.

Crista, who is one of the orphans who lives at our partner's school and orphanage, Fondation Montesinos, recently turned 13 year old. During our August visit, and in consultation with specialists, it became clear she was nearing the end of the window of opportunity to have corrective surgery. It was also clear that she had become depressed, withdrawn and was suffering from other health problems as a result of how she was physically compensating for the club foot. The attached picture was taken after she met with the surgeon. I think it’s the first time I have seen her lift her head and make eye contact in 5 years. Our healthcare providers set up multiple prep meetings with both the hospital and the surgeon. And she had the surgery just before GivingTuesday. Sadly, on GivingTuesday we found out she had a severe post-op infection. Thanks to an incredible network of healthcare providers and friends, both in Haiti and around the world, she is getting the care she needs. However, she will need a prosthesis and months of physical therapy. We are therefore running a very small end-of-the-year campaign to raise $2,000 to make sure Crista continues to get the care she needs. Crista suffered a lot of pain but she tells us she understands her situation and is looking forward to walking soon.  Please consider an end of the year gift if possible.

Thank you and Happy Holidays to all. 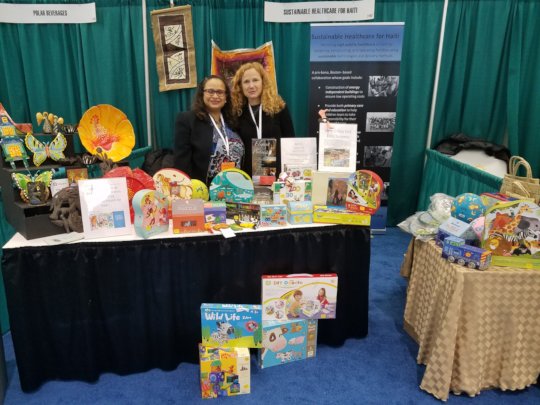 Mass Conference of Women 2017
‹ 1 2 3 4 5 6 7 8 9 ›
WARNING: Javascript is currently disabled or is not available in your browser. GlobalGiving makes extensive use of Javascript and will not function properly with Javascript disabled. Please enable Javascript and refresh this page.