An update from Manipur 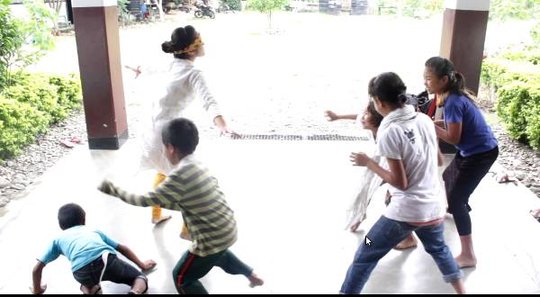 Kids playing with one of the team members

With the Donations gathered so far, Akhu Chingangbam could successfully conduct a range of workshops and lessons for the 62 children of his orphanage in the month of May. These include Ice Breaking Sessions with the children and the Staff; Introductory classes on Meitei Folk music taken by ChaobaThiyam, Tangkhul Folk music taught by the Legendary Naga Folk singer Guru Rewben Mashangva; Western Classical Guitar by Karnajit Laishram; and Basic Origami classes by Anku Heirangkhongjam. Regular music classes are being organized for the children and one song has also been written, composed and recorded! The children have also been able to hone their crafts making skills and other kinds of artwork.

The children have responded remarkably with the already visible enthusiasm, picked up the skills swiftly and according to Akhu’s report, have even demonstrated percussive skills. However, the recent activities were not devoid of challenges and they certainly wouldn’t be. Some of the problems pertained to the HIV positive children who are under ART medication that to a certain degree deters concentration. The children are usually very tired and weak. But the short attention span doesn’t necessarily hamper potential. For instance, an HIV positive child in the orphanage who also happens to have certain cancerous cells was one of the fastest amongst the children to have honed her guitar skills. The teachers and sisters in the orphanage noted that the children are so enthusiastic that they practice their lessons any free time they get, and they are very happy when they are practicing!

One thing the children enjoy the most is Akhu and his team playing for them. There have been moments when children just sit quietly listening to them play, sometimes they holding each other's hands and sometimes tears flowing their eyes. Such moments have been very touching for Akhu and his team as well. There also have been moments when the kids smile and laugh as they sing along clapping all the while. Akhu says that all such moments are testimonies of music working as a therapy for the little children in pain of loss.

The project has also attended to other needs of the children by mobilizing donations in Imphal and collecting huge numbers of items like clothes, toys, books, etc. Also, the children require substantial amounts of nutritional elements, especially vitamins. In the course of several activities, these children have grown attached to the members and vice versa. Many of them have opened up on a more personal level and become more outspoken. In fact, the teachers have been more inspired since. In the following month, the lessons would extend to dance therapy led by contemporary dancer Surjit Nongmeikapam along with visual screenings and excursion trips to various indigenous museums. Not to forget the recording of four songs with the children, and the music and guitar lessons shall continue. 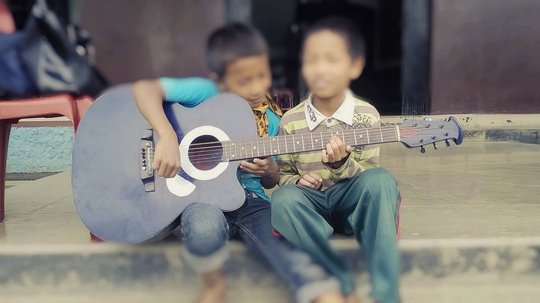 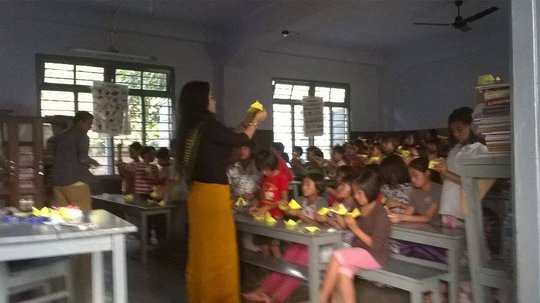 From abuse to honour 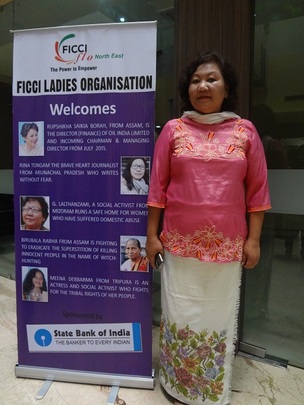 Lalthanzami at the award ceremony

This is the kind of progress that lift our spirits high and gives us reason to work harder and support our fellows so that they to reach their goal with gusto.

Women, often viewed as feeble and born to be suppressed, undergo brutalities in the hands of those who have so called power. But in contrast to this, there are women like Lalthanzami, who have been fearlessly fighting and providing shelter to the victims of domestic violence and abuse. Lalthanzami, also known more as the lady who runs the ‘The Safe Home', has received the Women Achievers award felicitated by FICCI-flo North East. The award was given by Mr. Tarun Gogoi (Chief Minister- Assam), who was also the chief guest at the award ceremony. Besides this, in the month of February, Lalthanzami was also appointed as the advisor for the Mizoram Labour Union, Zo Metriotic Front, and member of State Council for Child Welfare. These organisations are run by former beaurocrates, CBOs leaders and academicians. Lalthanzami feels that being part of these platforms, she will be in a stronger position to lobby and advocate for the victims of domestic violence and abuse.

Some of the developments in the recent months reflects her determination and fury of achieving what she believes in. A gang rape survivor was brought to ‘Safe Home’ in a state of complete shock and distress. One of the accused is the Church Pastor’s son who has a very influential network and connection with the higher authorities. The accused tried to influence the case for withdrawal, but their effort went wasted when with Lalthanzami's support the rape survivor refused to do so. While the case is taking its legal course, this woman concerned went through series of counseling at the ‘Safe Home’. In one of the interactions, she shared that being at the ‘Safe Home’ she felt secured and most importantly felt peace and calm in her mind. She was no longer frightened to walk alone. However, once she returned back home after staying in the 'Safe Home’ for a little while, one day Lalthanzami got a call from her during which she mentioned that someone broke into her house and threatened her. She was seeking help. But when the ‘Safe Home’ team arrived at her home for rescue, she was missing. There was no news of her for many weeks. Only in April, police was able to track her in another district. She was hiding there with her husband and had lost faith in the legal system and justice. This once again points out the danger faced by survivors of violence who decide to speak up.

Another case that kept Lalthanzami and her team busy was that of a well education 28 year old woman who finally decided to move out of an abusive relationship. In 2008 , after she completed her graduation from Delhi University, she married and started living in Shillong along with her husband. As young entrepreneurs, they both opened a hostel for young students in Shillong. In the year 2009, she conceived her first child. One fine day, her husband came drunk and ordered her to undress and show her private parts to all the boys living in the hostel. When she refused to fulfil his order, her husband abused her physically and declared that the child in her womb was definitely not his. This started a series of abuse which aggravated along with his addiction to alcohol. In 2011, their house owner asked them to vacate their house and shift the hostel as well. As they were not able to find a decent shelter to move in and also host 80-100 students, they decided to shut the hostel and move to Mizoram, their home state. The husband continued to drink and abuse her every night. He now also started using drugs (heroin). Now she has 3 children and finds it extremely difficult to manage home expenses. She cannot even work leaving her children at home.  With no money in hand and more responsibilities, problems have increased between the couple.  On the 13th of April, the husband came back home drunk and head straight to hit her. In order to save herself, she ran into the bedroom and locked herself along with her children. Since they were very noisy, their neighbour, who is also their church elder, came to their house. As the husband went to open the door, she called her sister and Lalthanzami for help and rescue.  On her consent, an FIR (First Information Report) against the husband was filed that very day at the Bawngkawn police station. In the meanwhile she has moved to her brother’s house with her 3 kids.

A couple of outreach activities in the form of awareness camps were organized at the Canan Street, Mid Town, Vaivakawn Street and Government Complex in Aizwal. As part of legal and advocacy outreach, Lalthanzami visited the ministry and police for updates on the progress made in other reported cases. She was informed that charge sheet for two of her reported cases have been filed. During this month, the Mizoram Labour Association has come forward to provide their support for all labour related issues which emerge out of the violence and abuse cases. Lathanzami has welcomed their support and has requested the association to give equal pay for unskilled labors (both women and men) in Mizoram.

As of now there are 8 women and 5 of their children are living in the safe home. All the 5 children have received education sponsorship from local NGOs and individuals. The women and children have started a small kitchen garden in the coumpund. This is not just a nice way to destress, but the produce has also reduced the expenses of the kitchen. Another happy addition to the family was a television set, which was donated by a friend of the ‘Safe Home. With the new entertaining addition to the family, evenings now seem to be chirpy and buzzing.

We still need your support!

While we continue our efforts to raise funds for the project, Akhu has already started the ground work needed to start the project. After discussions with a local orphanage that shelters children of conflict, he has been able to get their permission to allow Akhu to work with the children living there.  As orphanages are monitored by Child Welfare Committee (CWC)* to ensure the safety and well being of the children, a formal permission has to be taken from the CWC before the project begins. Akhu has been able to get this permission from CWC under the condition that any visual material, whether photographs or videos, that showcase the children of the orphanage will have to be approved by the CWC before release. This is a huge step forward as Akhu can now start the project as soon as we have the funds.

Since online fund raising is going slow, and both Akhu and the children anxiously waiting to start the project, FST has decided to organise a fund raising event on 29thof March to raise the funds required. Hopefully the event will be successful and the project can be started from April 2015.

Akhu and the children of Manipur still need your support to bring out their messages of peace. Please consider donating once again for this project. Spread the word about the project within your friends and family and encourage them to donate as well. We need your support NOW!

* In India, as per the provisions of the Juvenile Justice (Care and Protection of Children) Act 2000 (amended in 2006) State governments are required to establish a CWC or two in ever district. Each CWC should consist of a chairperson and four members. The chairperson should be a person well versed in child welfare issues and at least one member of the board should be a woman. The CWC has the same powers as a metropolitan magistrate or a judicial magistrate of the first class.