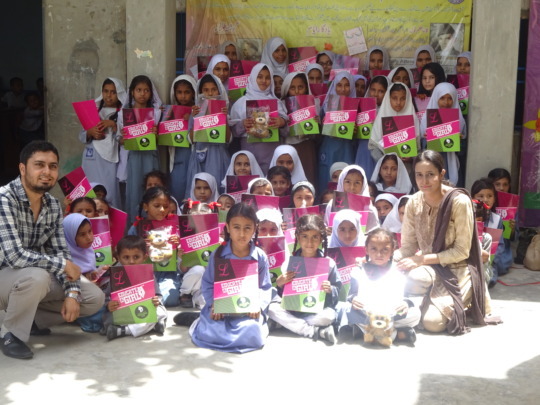 “YOU ARE GOD’S PLAN FOR THE ORPHAN!
HOW WIILL YOU RESPOND?
EXPLORE THE NEEDS AS WELL AS WAYS
THAT YOU CAN CARE OR ORPHANS”.

There comes a time when every parent departs from their children by leaving this world and every human being, no matter what their age, dreads that day of segregation. Many children living in this time and age are parentless and depend on their society to exist and thrive.

With constant change in economic and social circumstances, ongoing conflicts and political turmoil in many developing and transition countries like Syria, Myanmar, Somalia, Sudan, Mali, Iraq, Afghanistan and Palestine, we are faced with many situations where the number of orphans and needy children is constantly increasing. According to UNICEF, there are between 143-210 million orphans in the world. This figure includes children who have lost either both of their parents or one of them.

The problems faced by orphans are complex and impact on their individual age and circumstances. The mental trauma and agony of witnessing warfare or losing parents and family members is not easy to deal with and requires tremendous courage and patience to recover from it and adapt to a new situation.

One might not be able to take away the grief of orphans and needy people but they can extend their hands in generosity to let them know that they are cared for and supported. Since we live in a globalized world, societies are inter-dependent on each other for survival and progress. From this perspective, people living in different regions of the world are responsible to help children in dire need of support and sympathy.

Keeping this in mind, we are trying our best to bring joy in the lives of these kids, however we could.

We visited Idara Al Khair with our team which is a school for orphans and those who couldn’t afford their studies. We met many kids over there and realized that it’s not only orphans who need our help and are our responsibility but there are many other kids as well who are less fortunate, although they have parents and are living with their families but still their families are not able to provide for the basic needs of these kids, no matter how much they wish to.

Keeping that in mind we realized that its our responsibility to help them as much as we could and that’s why we started working on this. And with support of our wonderful donors like you all, we were able to pay one semester fee for 30 girls last month.

These girls were so  young and the main festival was near so we wanted to make them happy somehow so we gave them gifts like teddy bears which is a part of another programme of ours.

We felt so happy because we were able to do something for those in need and we think it’s a blessing and for that we wanna thanks to all our donors, because it won’t have been possible without your help!

There are so many lives who are waiting for someone to bring light in their life and we are willing to do that as long as we have all your support.

Together, we are transforming lives! 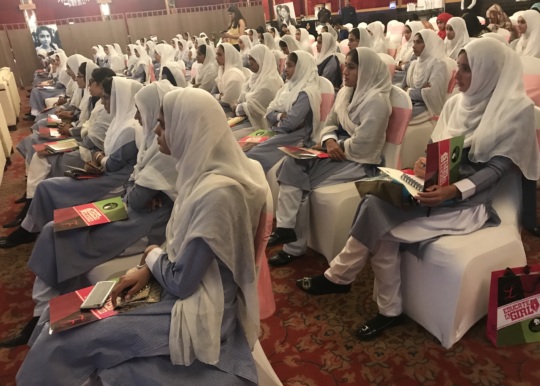 In our last report we mentioned about the Educate a Girl Lahore 100 Scholarship funded celebration,now we are so excited to share with our donors that last week we conducted our training in Lahore - Pakistan and was able to transform 200 lives.

“With the partnership and support of so many, we are delighted to introduce our award-winning Educate a Girl programme in Lahore, starting with the education of 200 deserving girls," stated Tara Uzra Dawood, Founder, Educate a Girl. "The aim of the program is to encourage young women to become leaders and women of influence and are very excited about our fantastic trainers and speakers.”

Pakistan’s female population is estimated to be 48.65 percent of the total, the majority of which lives in the country’s rural areas. In rural Pakistan opportunities, for women are still lower than those the limited ones for their sisters in the urban centres. According to Labour Force Statistics (LFS) 2012-2013, of the estimated 180 million people, only 12.51 million Pakistani females of various ages are in employment of some sort. There exists a cultural bias, which manifests as a discouragement from hiring women. Thus, this program is an important step to address an urgent need to increase the representation of women holding influential jobs in Lahore, to better address issues affecting women and girls, such as: domestic abuse, rape and sexual assault, harmful cultural practices, level of access to quality education and healthcare, child marriage, enacting laws and enforcing legislation to enhance overall welfare of women, female genital mutilation, funding constraints for business start-ups, entrepreneurial training and mentorship, gender equity in corporate board representation, pay differentials, low level of participation in governance and leadership by women etc.

Educate a Girl is a partnership between Dawood Global Foundation and Facebook's internet.org to educate 1 million girls globally and was just recognized by the World Bank as top 2% women-led initiative in MENA. EAG has successfully educated 1000 deserving girls in Karachi, Pakistan and 1250 in Lagos, Nigeria, including those orphaned by the atrocities of the Boko Haram. Funds are currently being raised for Morocco, Turkey and Canada (First Nations). This launch in Lahore will take this international movement truly national and we may even educate a future Prime Minister in our audience.

In Karachi, 5 scholars have become news anchors, 19 girls have contributed scholarships out of their first ever paychecks, 1 girl has funded 4 scholarships for her peers from her success and several girls have been placed in successful jobs or become entrepreneurs.

All of this was possible because of the support of our well wishers and wonderful donors like you all so on behalf of these girls, we would like to thank you all.

Together, We are transforming lives. 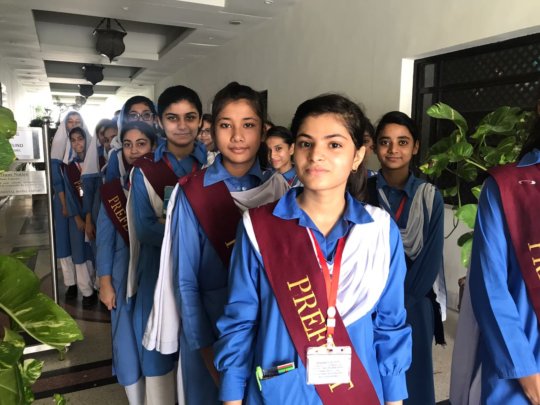 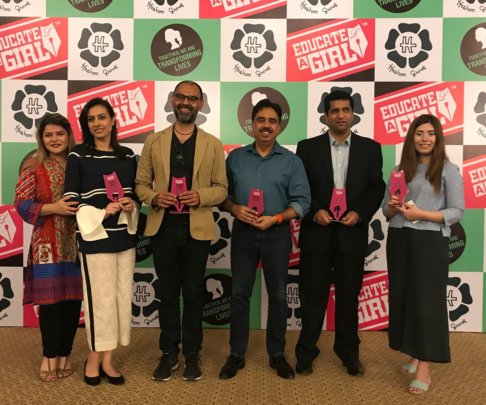 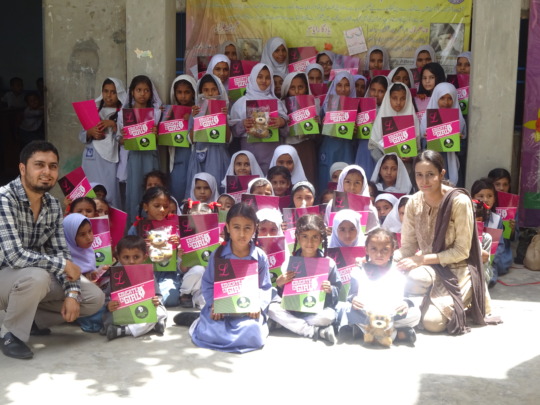 As we mentioned in our last report that we visited Idara Al Khair with our team which is a school for orphans and those who couldn’t afford their studies. We met many kids over there and realized that it’s not only orphans who need our help and are our responsibility but there are many other kids as well who are less fortunate, although they have parents and are living with their families but still their families are not able to provide for the basic needs of these kids, no matter how much they wish to.

So we distributed teddy bears to orphans as well as some of other kids who were same excited by receiving a gift. We spoke to some of these kids and many of them shared their stories with us. Last time we shared ayesha’s story with everyone which touched many hearts and as mentioned we spoke to many kids so thought we should tell you all about them also.

Just to give an idea, the school that we visited was in a grass rooted area where the residents didn’t had basic facilities even. There was no proper system for basic necessities like water, gas and electricity so imagine what would be the case with education. Obviously there were not many schools In fact we think this was the only school for the 5 blocks in that locality.

Obviously a school which Is running on funds only and doesn’t get any support from the government even, no matter how much work the school is doing for the society. Such school can provide only the basic things and that’s why we were not shocked to see that the building was not luxurious, it was just a building which was still in the process of being built and the class rooms had normal old furniture with old blackboards.

But there was something which was very different than other schools, we got to know that some of the students in the school are orphans and that’s why they don’t have any place to live so those kids live in the school and there is a place in the ground floor which is built for these orphaned kids so they could have a shelter at least and not only that, the school provides food for all the kids studying and usually teachers eat with these students although we know that in some countries it’s a norm that school provide foods or lunch to kids but this is not the norm in Pakistan and that’s why we were very happy and satisfied to see this and when we spoke to the administrator of that school, he said they try their best to do as much as they could do for these kids and that’s when we decided that we will give our teddies to these kids as well as we will pay for their studies for a semester because we think they deserve it, as a gift even because these kids in this school are at least trying for a better life and that’s what really matters: hope, because as long as you have hope for something, you try for it.

We learnt one more thing that no matter how small your efforts are but they always have a result or reaction. Because although we are just providing teddy bears to these kids and trying to help that school a lil but we believe that it will give them an idea that at least there is someone who is thinking about them and that’s what really matters because maybe in near future these kids will do the same for some other kids.

We were able to experience all this and do something for these kids by the help of all our donors lie you and for that we want to thank you.

‹ 1 ... 41 42 43 44 45 46 47 48 ... 58 ›
WARNING: Javascript is currently disabled or is not available in your browser. GlobalGiving makes extensive use of Javascript and will not function properly with Javascript disabled. Please enable Javascript and refresh this page.