Colorism is a cold reality for so many young girls in Pakistan who are told from a small age that they are ugly and undesirable. As they get older, multinationals and other top jobs often prefer "fair girls" for window-dresssing as verified by several students who participated in our recent Educate a Girl Skin Colour conference.

There are enough obstacles in life and mental health and struggling with self-esteem are real issues. This project is fundraising to combat that very problem. And change is real. Change is happening. Already, Unilever has announced the change in name of Fair and Lovely to Glow and Lovely.

Step by step, changes will occur and we are on the frontlines for both advocating, training and building a community that celebrates its differences, does not discriminate because of them.

Thank you for donating to Raise Self-Esteeem of Young Girls in Pakistan to be planted.  Please do give more so more programming can be put in place to combat deep-rooted colorism and most importantly, raise the self-esteem of Pakistani girls.
Starting today, September 14, GlobalGiving is matching all donations at 50% up to $50, until funds run out. So if you give USD 100 or more, your donation will be increased by $50.  Thank you!
Sep 14, 2020 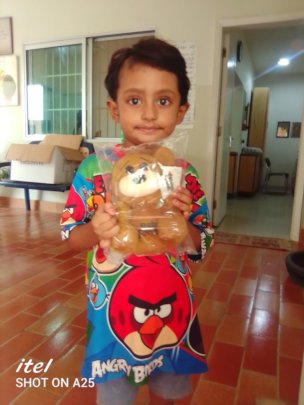 Little Shoutoo (name changed), 6, is an orphan in Jamsharo, Pakistan. He feels safe and included in all orphanage activities. School, playtime and meals.  It's just when he's alone, he is usually reading a book. It's his way to get lost in another world and imagine what it would be like if he had a family of his own.  His favourite book is an American title, How Much Do I Love You.  Although his English is not very good, this chidlren's book is short and simply enough, with so few lines, that he reads it over and over again. He loves it best because it makes him believe in the impossible. That there is not only someone who loves him, but loves him soooooo much.

When he received his teddy, he was one of many children at the orphanage to be gifted one, but this felt different to him. When he held the bear close to his chest, his heart. He felt something inside of him move. Melt. Open.  He felt protective. He had never felt that emotion before. He knew the supervisors protected him all the time. His teachers too. But he had never felt the need to protect or look after anyone himself. He was still so small that he had never known that emotion. Once he cuddled the bear, however - his very own bear - he felt a strong need to protect this bear - his bear - from anything and everything.  He held the teddy closer and closer and knew a feeling of responsiblity and a need to care for something, for the very first time.  He also felt an overwhelming love for his little bear, who he called Shoutoo Beta (which means baby boy), after him.

Feeling so much love, he knew Shoutoo Beta loved him too.  Just like the book he so loved to read, he had found love. And love had found him.

Thank you for gifting a teddy to Shoutoo.  Please do give more so more orphans can experience this special feeling of having someone to loved and be loved by.

Starting today, September 14, GlobalGiving is matching all donations at 50% up to $50, until funds run out. So if you give USD 100 or more, your donation will be increased by $50.  That's 5 more bears, just for donating today!  Thank you!

Donate today and be matched!

Moringa tree
There are very few things you can do or give that keep giving. Planting a tree is one of them.  It can keep giving oxygen, beauty and combating climate change for over a century later. Isn't that a miraculous blessing.

When we had Karachiities plant 250 trees this past Earth Day, as we fundraise for more trees to plant, we thought we would follow up on the ones that had been planted.  This is a picture of a tree planted by Alisha (name changed), who posted this on social media with pride showing off the growth of her plant.  As you can see, the moringa tree is growing healthily and becoming quite big.
We planted moringa trees  - also known as drumstick trees - as they are a multi-use tree that, according to research reports,  "thrives in otherwise difficult growing conditions where arid conditions and nutrient depleted soils are prevalent. Almost every part of the tree (except the bark and wood) is edible and offers excellent nutrition to both humans and domestic animals...The moringa tree is loaded with incredible nutritional benefits and is an extremely rich source of antioxidants such as quercetin and chlorogenic acid. For people who deal with diabetes and high blood sugar, regular consumption of moringa leaves, roots and seeds can also help to significantly lower your blood sugar levels.  Certain studies have also shown that moringa leaves and seedpods can help to regulate hormonal imbalances and help to slow the aging process. A cup of moringa tea each morning, then, can help you stay eternally young, or at least keep you looking younger for longer. While the health benefits of moringa go on and on, the majority of these health benefits come from the fact that it packs an enormous amount of nutrition into one small, little leaf. The high protein content along with the high concentration of essential vitamins and minerals has made the moringa tree effective in helping to combat malnutrition of children and mothers in developing countries. At the same time, moringa can be consumed as a natural medicine supplement for everything from reducing swelling to boosting the immune system and to increase breast milk production in lactating mothers." (Perma Culture News)

And, of course, this thriving, resilient tree, is also good for the environment. Trees absorb carbon dioxide as they grow through the process of photosynthesis, converting it into the oxygen we all need to live. In fact, there is no greater carbon-capture technology than photosynthesis—which happens to be both highly efficient—and free.  (Rainforest Alliance)

Thank you for donating a tree to be planted.  Please do give more so more trees can combat the climate change Pakistan is currently facing.

Starting today, September 14, GlobalGiving is matching all donations at 50% up to $50, until funds run out. So if you give USD 100 or more, your donation will be increased by $50.  That's 5 more trees, just for donating today!  Thank you!
1 2 3 4 5 6 7 8 9 ... 58 ›
WARNING: Javascript is currently disabled or is not available in your browser. GlobalGiving makes extensive use of Javascript and will not function properly with Javascript disabled. Please enable Javascript and refresh this page.