Scars and Stripes - the life of Thailand's tigers 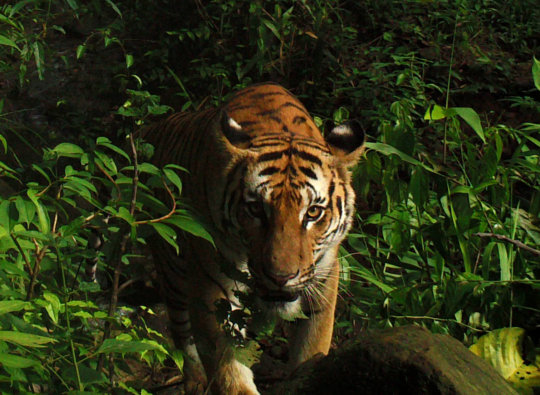 Not many of us are lucky enough to share our work space with wild tigers but for Eric Ash, the forests of Thailand and their tigers have been part of his day job. Here's a glimpse into his work tracking the tigers of Thailand that your donations help us support...

Our monitoring work, funded by the David Shepherd Wildlife Foundation and its TigerTime campaign, relies to a great extent on camera traps and the photos of the tigers they capture. They can provide important insight into tiger behaviour, range, population and ecology; information that can be used to develop vital protection strategies.

Notably, this information is collected non-invasively, so we can rest assured that we can observe tigers, in most cases, without interrupting their natural behaviours.

For five years I have catalogued every camera trap image of the tigers in Eastern Thailand, identifying them by their stripe patterns and building a strong sense of them as individuals. Happily, some of the tigers we first recorded in 2008 continue to be observed.

'F1' a female first photographed in 2008 was seen again in 2016. We estimated her to be at least 12 years old which is quite an age for a wild tiger. Our most frequently photographed tiger, however, is a dominant male known as 'M2' who has reigned over this territory defending it from rival males year after year. Also about 12 years old he wears the scars of his hard-fought battles.

A recent photo of M2 showed not only fresh, open wounds - perhaps the result of a fight with another tiger or from a failed hunt - but also a large growth on his front right leg. Whether he will survive these is uncertain.

Yet, tigers can and do survive great adversity. A scrappy male named 'M5' sustained a severe eye injury, presumably in a fight, in 2012. He surfaced again after some time in another survey area and wandered, seemingly as a transient, perservering despite his injury.

Despite their resilience, tigers are still under tremendous threat. In Thailand potentially fewer than 200 individuals remain, representing some of the last populations for Indo-Chinese tigers left in the wild.  It is this precarious position that compels us to maintain a high level of secrecy about specific locations and to call for additional support so that these tigers can continue to write their own stories deep within Thailand's incredible forests, well into the future.

Thank you for your ongoing support, with it you can be part of the story of Thailand's tigers. 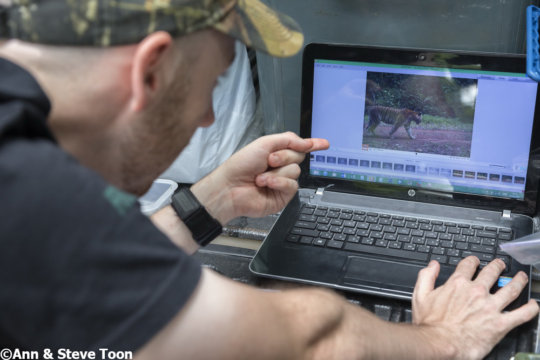 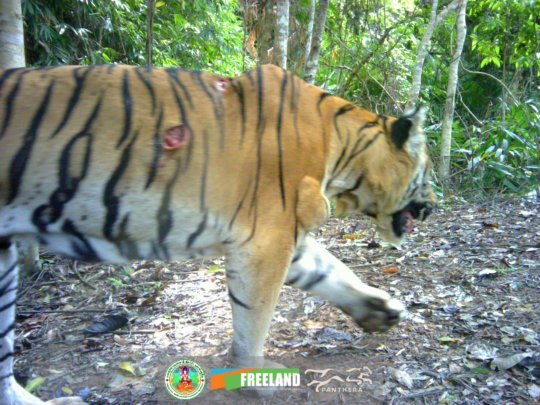 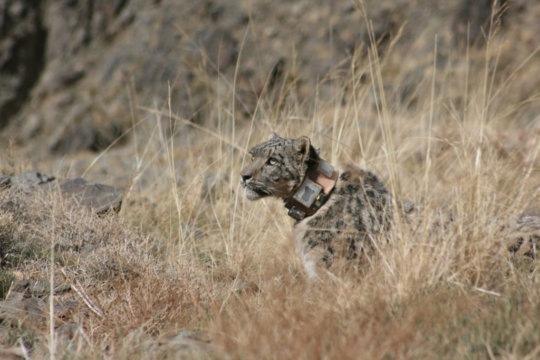 Since 2008 the David Shepherd Wildlife Foundation has helped collar and track 20 wild snow leopards in Mongolia - an amazing feat for snow leopard science.

Using the data from the GPS collars, the research team has been able to calculate average home range sizes finding that females use approximately 130 square km and male cats c. 220 square km. What's more, the researchers have found that up to 40% of all protected areas across the snow leopard's range are too small to support these endangered cats.

"Our results show that the snow leopards have a substantially larger spatial need than previously thought," says the study's lead scientist. "These home ranges are between six and 44 times larger than earlier studies had indicated."

To frame their findings in the context of conservation, the research team compared average snow leopard home ranges to all 170 official, state-sanctioned protected areas within the cats habitat.

"Forty percent of these protected areas are smaller than an average male home range - so are too small to host even one breeding pair of snow leopards," they concluded.

The findings made one thing very clear: protected areas alone will not be enough to save the snow leopard.

More than ever, the data underscores the importance of community-based conservation programmes that can extend beyond the protected areas to the larger landscape.

The David Shepherd Wildlife Foundation was key to this recent research but has, for over 20 years, championed the community-based programmes that help expand the protection for snow leopards beyond the protected areas. With your ongoing support we can expand these areas - both protected and community-based - to ensure the long-term survival of one of the world's most beautiful and elusive big cats.

Thank you for helping us broaden our understanding and the methods of protecting snow leopards in Mongolia. It is only through the combination of solid science and continued community outreach that we can provide a safe future for snow leopards both in Mongolia and across their entire range. 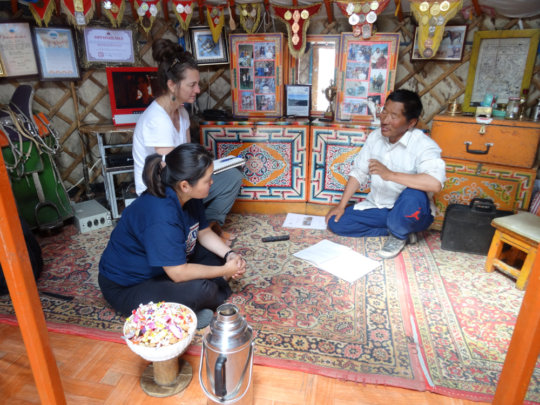 Working closely with the community
Aug 1, 2017 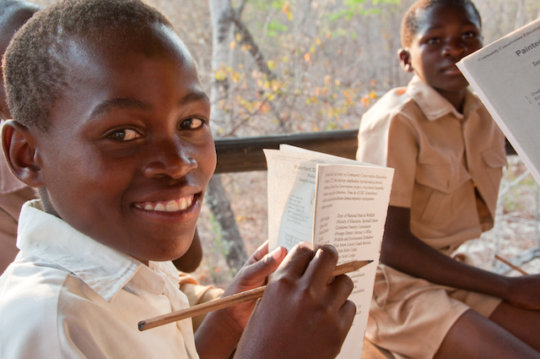 Education forms a core part of what the David Shepherd Wildlife Foundation supports. Park protection and anti-poaching programmes work in tandem with community outreach and education to create an holistic response to the issues facing endangered wildlife and the people who share their landscapes.

In Zimbabwe we have been funding the Children's 'Iganyana' Bush Camp since 2004 and have welcomed over 10,000 students to this amazing residential camp.

The aim is to teach children about conservation concepts, ecological relationships and the value of biodiversity along with an appreciation of painted dogs and the role they play in the ecosystem. It also works to inspire an emotional attachment to the beauty and complexity of nature.

Our funding means that the programme is free to all grade six students (11 year olds) from the 19 primary schools in the Hwange area.The four day programme reaches more than 800 children each year and each of those children, inspired by the amazing experience, invariably returns home as an ambassador for wildlife and for the painted dog.

A follow up session called Kids for Science is now offered to 14 year olds with many of the same children returning following their original Bush Camp visits.

The really exciting part of the programme is that the children who have attended the camps are now coming back to the project to work - as rangers in the anti-poaching units and as guides. In a country where formal education and employment is sometimes hard to come by this great programme is not only providing those key staples to locals but also an enduring and life-long understanding and respect for wildlife and, most importantly, the painted dog.

It costs around £40 (US$53) for one child to attend a four day Bush Camp. So, for as little as £10 ($13) a day you can help change not only a child's life but the future of the painted dog and other wildlife in Zimbabwe that relies on people understanding and appreciating its true value.

Education not only matters but in Zimbabwe, it is helping to make a real difference to wildlife survival. 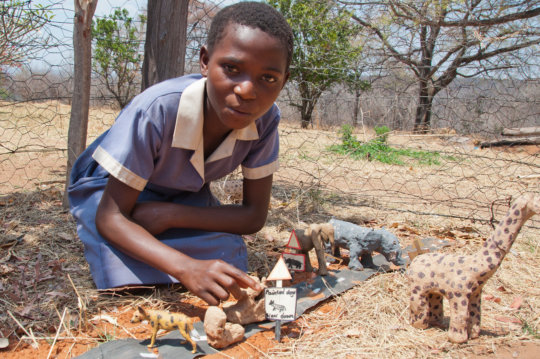 Understanding Nature courtesy Molly Feltner
‹ 1 ... 35 36 37 38 39 40 41 42 ... 45 ›
WARNING: Javascript is currently disabled or is not available in your browser. GlobalGiving makes extensive use of Javascript and will not function properly with Javascript disabled. Please enable Javascript and refresh this page.