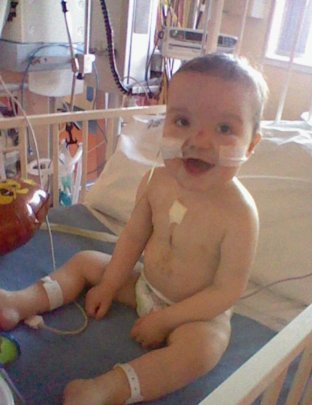 Throughout the winter of 2015/2016, Yorkhill Children's Charity has been privileged to meet babies and children with cardiac difficulties who have been supported with wonderful care and treatment at the Royal Hospital for Children, Glasgow.  Yorkhill Children’s Charity has raised funds this winter to provide a state-of-the-art cardiac scanner for the Royal Hospital for Children, Glasgow.

The vividly accurate view of the heart in motion provided by this scanner will help our practitioners make confident diagnoses, reduce additional and invasive follow up tests, allow for portable scanning at the patient’s bedside and help direct an informed treatment plan for patients, all adding to the positive, holistic impact of the patient’s journey through the hospital.  Dylan's story helps to explain why our for Little Hearts in Scotland Appeal  will help to make such a difference.

At less than 2 days old, Dylan from Dumbarton, Scotland was diagnosed with a heart murmur and was transferred to the Neonatal Intensive Care Unit at Yorkhill Hospital for specialist care over serious concerns with his breathing.

It was here that Dylan’s mum Sheona realised that her baby was a lot sicker than she originally thought. Dylan was diagnosed with Tetralogy of Fallot – a complex congenital heart defect which involves 4 abnormalities with the heart. This causes low oxygenation of the blood and results in delayed growth and development.

However, Dylan’s condition was made even more complex as he was also diagnosed with Pulmonary Hypertension, which is when there are fewer pulmonary valves going down into his lungs to carry oxygenated blood.

For a child to have both Tetralogy of Fallot and Pulmonary Hypertension is incredibly rare so Dylan has become part of a genetic study to understand if there are defects with his DNA.

Sheona told us: “It frightened us at first. We were oblivious, we didn’t know what Dylan’s life expectancy was.

“I kept thinking ‘how do I tell my 2 year old boy that his baby brother was born with a heart that wasn’t working’?”

At just 6 months old, Dylan had a BT shunt put in place to bypass one damaged area of his heart. At 16 months he then had his first open heart surgery to try and repair the hole in his heart.

He then underwent further open heart surgery when he was 3 to replace his pulmonary valve with a bovine valve, however this operation was originally delayed due to concerns that he would not survive it. Doctors eventually took the risk to operate as he was becoming even more poorly, however Dylan made an incredible recovery, walking off the ward just 8 days post-surgery.

Sheona is so grateful for the wonderful care given to Dylan and told us: “The nurses were just amazing, we couldn’t have asked for better. The care we’ve had as a family, not just Dylan, we can’t fault it”.

Dylan’s parents aren’t sure what the future holds for Dylan but are always inspired by how he doesn’t let his heart condition stop him.

“Dylan still has blue episodes now. His heart has to work very hard and so he gets tired out quite easily if he runs about with his friends but to look at him, you really wouldn’t know how ill he really is.

“He is starting to realise how unwell he is but what he’s achieved so far is amazing. He doesn’t let it stop him”.

We were thrilled to have the remarkable 6 year old Dylan along with his parents Sheona and Gordon, brother Sam (9), and wee sister Mikayla (4) along to our Christmas Concert last year in support of our Little Hearts Appeal, which will fund a state of the art and want to thank them for sharing their story.   Yorkhill Children's Charity will raise approximately £1,000,000 to fund world class medical equipment this year, we simply could not do this without your help. 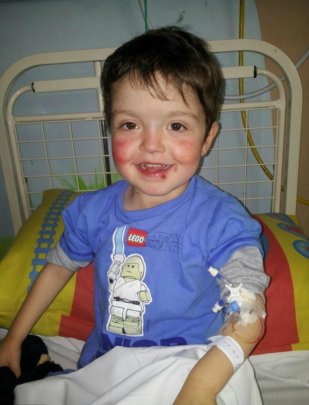 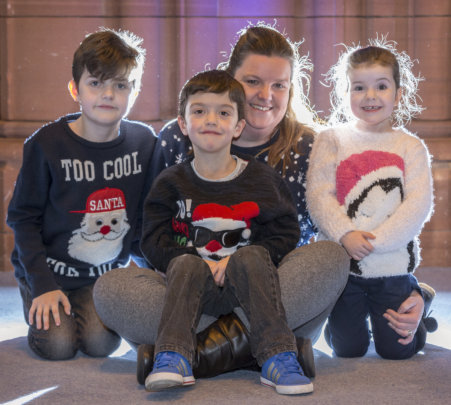 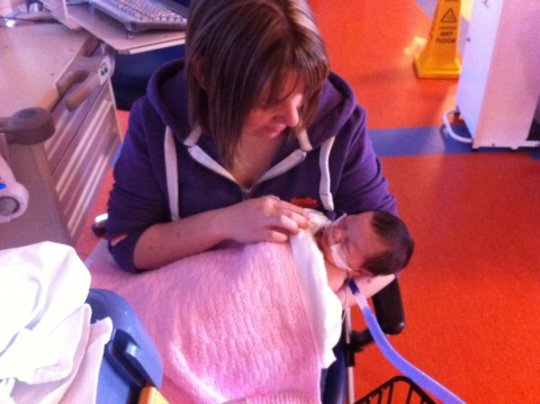 Yorkhill Children's Charity shares the story of how Keira was born with severe heart defects and was rushed straight to the Paediatric Intensive Care Unit at The Royal Hospital for Children in Glasgow. The traumatic events which would follow left Keira’s family preparing for the worst, however little Keira has defied the odds

At her 22 week scan, mum Michaela was faced with the devastating news that her baby girl had severe heart defects which would require full open heart surgery when she was born.

This was the start of a worrying journey of scans every 2-4 weeks not knowing what the outcome would be of each appointment. At 38 weeks, baby Keira was delivered by elective C-section and within minutes was rushed to the Paediatric Intensive Care Unit at Yorkhill with severe respiratory distress.

Keira’s heart and lungs had stopped, and her family were told to prepare for the worst. After a distressing 25 minutes spent trying CPR and massaging her heart, Doctors managed to revive Keira. They then performed an emergency septostomy procedure at less than 1 hour old which involved inserting a balloon catheter through her heart valves to keep them open until she would have full open heart surgery.

At just 8 days old, Keira was put on a heart and lung bypass machine in order for her to have the required surgery. This in itself posed a massive risk to her if she was to find difficulty in coming off this machine post-surgery.
It was an agonising day for Keira’s family when she was taken for her open heart surgery which would last 10 hours but they were elated when they got the call to say that the surgery had been a success. Although Michaela couldn’t wait to be reunited with her baby, she recalls being in shock when they saw baby Keira’s chest wounds.
“Nothing had prepared us for what we had to see”

Michaela still hadn’t even held her newborn daughter, however she recalls the emotion of when she finally had the chance to do so
“I was a mess, tears rolling, the lot – it was such an emotional day”

Keira’s health was then faced with another threat as an MRI scan revealed patches on her brain which could result in brain damage, and also retained fluid on her heart and lungs which would require 14 weeks of medication.

Now 2 years old, Keira has been diagnosed with mild brain damage resulting in sensory issues as well as Laryngomalacia – a floppy windpipe, meaning that she has difficulty breathing however we are thrilled to say that Keira is a happy, wee girl enjoying nursery, walking and talking!

Yorkhill Children's Charity is thankful to Keira's family for sharing Keira's story, defying the odds.  We are proud to support all our young patients at the new Royal Hospital for Children in Glasgow; helping to ensure that their care and experience is the very best it can be, they deserve nothing less. 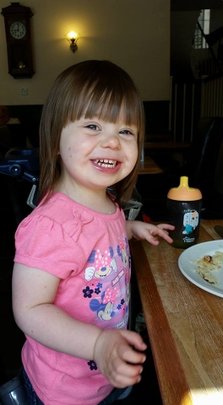 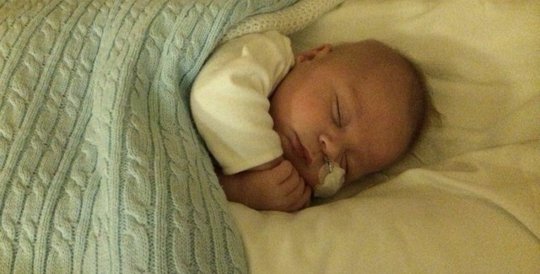 Oliver was born in January 2014 and his Mum Kelly-Anne, Dad Scott and big brother Luke were delighted to welcome him home. Taking your newborn child home should be a joyous time, however only one night after leaving hospital, things were to take a dramatic turn for his family.

Oliver was rushed by Yorkhill Children’s Charity's Paediatric Ambulance to the Accident and Emergency Department at the Royal Hospital for Sick Children due to growing concerns for his health. On arrival, Oliver’s blood sugar level was terrifyingly low which resulted in a seizure.  With both Scott and Kelly-Anne looking on, doctors and nurses resuscitated and stabilised little Oliver; however this became the beginning of a frightening journey for the family.

“In the early days of Oliver’s admission, we received some devastating news and were told to prepare for Oliver to be in hospital for weeks and possibly months. I just wanted to take my week old baby home”.

Oliver was admitted to the Neonatal Intensive Care Unit, which was a daunting experience for the family. Kelly Anne recalls her anxiety at the medical equipment, her heart sinking each time a light flashed or an alarm sounded - always fearing for the worst. However, Scott and Kelly-Anne recall being touched by the care shown by the staff who went above and beyond their call of duty to reassure them, and were confident that Oliver was in the best place possible.

“I was leaving the ward very upset and one of Oliver’s nurses ran after me and just hugged me. She saw my despair as a mother and reached out to me. Gestures like that helped to soften the sterile and controlled environment we were all living in”.

A Diagnosis for Oliver

At 4 weeks old Oliver was diagnosed with Congenital Hyperinsulinism (CHI), a rare condition which causes individuals to have abnormally high levels of insulin, a hormone that helps control blood sugar levels. Affecting only 1 in every 50,000 newborn babies, the severity of CHI can vary from lethargy and irritability to serious breathing difficulties, seizures and comas.

Oliver spent 8 weeks in total at the Royal Hospital for Sick Children, with his parents by his bedside. Although this was a difficult time for the family, Kelly-Anne remembers some lovely moments spent at the Hospital with Oliver, their family and the medical team. At 7 weeks old, Oliver was baptised in his cubicle in the Intensive Care Unit and everything was done to make this a special event for the family.

“The staff helped us make this as special as possible and to celebrate we were allowed to take Oliver out of the ward for the very first time. We enjoyed some coffee and cake in the hospital café. A truly memorable day”.

The Move to Manchester

The decision was made that surgery was Oliver’s best chance of a cure. So the following week, Oliver was transferred by air ambulance to the Royal Manchester Children’s Hospital, a centre of excellence for the necessary procedure, and the family relocated to Manchester indefinitely.

Oliver endured a long and challenging operation where twenty percent of his pancreas was removed. Having initially responded well, just five days after the operation Oliver took a turn for the worse. Scott and Kelly-Anne felt like they were on a terrifying rollercoaster of emotions made even more challenging as they were 200 miles from their support network. However after a long recovery Oliver was eventually well enough to be taken home in June 2014.

Although relieved to be taking their baby home, due to everything Oliver had been through, he had lost the instinct to suck. This presented another challenge for Scott and Kelly-Anne, who had to retrain their 5 month old baby to reverse an oral aversion.  Despite being told that Oliver wouldn’t ever drink milk from a bottle; with a lot of perseverance and support from Yorkhill’s Speech and Language therapists, Oliver was drinking all of his milk from a bottle by 11 months old.

We are happy to hear that since his recovery, Oliver has enjoyed being at home with his Mum, Dad and big brother. He now only needs to attend quarterly appointments at Yorkhill, however Kelly-Anne tell us that the Royal Hospital for Sick Children is still a very special and importance place for their family.

Following on from their own experience Oliver's family will be helping to support the thousands of sick children just like Oliver who pass through the doors of the Royal Hospital for Sick Children each year and hope that you will join them in their support. 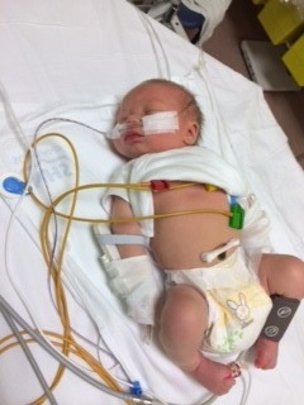 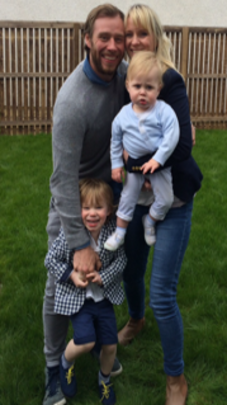 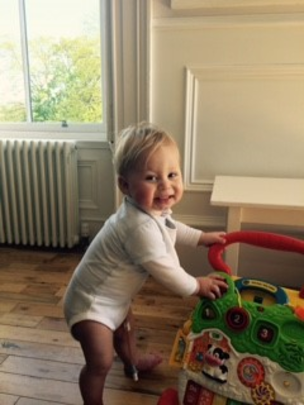