Flynn: From Abandoned to Adored 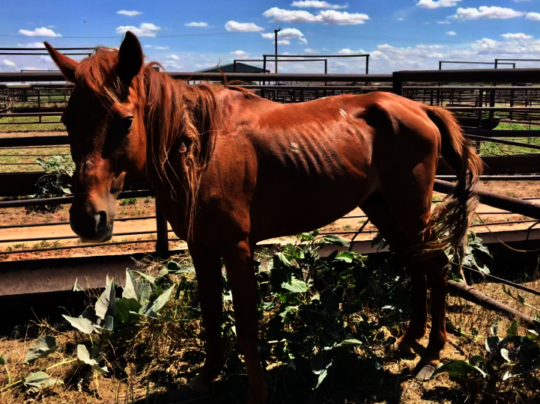 Day 1 when we met Flynn

In May 2019, Easy R received a call from the local sheriff's department informing us that photos were about to be texted. As the photots came through, we saw a heart-breaking situation in which a small horse was tied to a trailer home amongst a great deal of trash, pipes, furniture. He was thin, his mane was terribly matted, and in a few photos, the rope he was tethered to was tangled up in metal panels on the ground.  He had no water (in May it is already hot in West Texas) and the only food he had was the weeds on the property.  Most alarming were photos of his feet. They were grotesquely overgrown. It was obvious that his basic care had been neglected for many, many months.  It's possible his feet had not been trimmed in a year or more. In addition, he had scars on his back and sides that evidenced he had been ridden in a very poorly fitting saddle and/or without a saddle pad.

Even though someone had called the situation into law enforcement, no one in the neighborhood was willing to give any details about who owned the horse or why he was abandonded.  Only that he had been there for a few weeks. The sheriff deputy informed Easy R that an order had been issued by a judge to pick up the horse and locate a rescue that might be willing to take him.  We were willing and Easy R staff went to meet the horse at the local sale barn where he was being held.  Fortunately for us, we have several foster families who are willing to help at the drop of a hat.  Families who say yes.  Families who, because of their willing hearts and hands, enable us to say yes to horses like Flynn.

In the past 9 months, Flynn has been in two foster placements.  The first family (Carol and Sara) named him Flynn, started his feeding program, provided safe shelter, green pastures, farrier care, and the beginning of trust building.  Even though it was obvious by the scars on his back and sides that he had been ridden before, it was also obvious he was extremely distrustful of people and evaded all physical contact at first, understandably so.  In August, Flynn was transferred to a local boarding barn (great friends of Easy R) in order for a staff member (Heather) to begin working with Flynn on a almost daily basis, assessing his skills, teaching him new things, promoting trust, and starting him under saddle (in a correct, humane way).

We have learned he is around 7 years old, is most likely a pony or mixed pony breed, is still leery about touch but willing to try, still not too sure about the farrier, loves horse cookies, is very kind and slow around small children, wants to bask in the sun, gets along with other horses, and is starting to appreciate his time with Heather. And she adores him. He is being ridden almost daily and learning and adjusting to many new things.  Soon, he will be ready for an adoptive home where he can continue to learn, gain confidence and skill, and continue on in his training.

When we look back on Flynn's 9 months with us, we are so incrediby grateful for all the foks who, thus far, have been a part of his recovery: law enforcement, foster families, service providers, volunteers, and YOU! Your donations make this possible.  Financial support is why we can say yes to calls about horses like Flynn.  And, unfortunately, we will continue to get calls about neglect and abuse cases.  But fortunately, we can say yes.  Thank you so very much for your support. 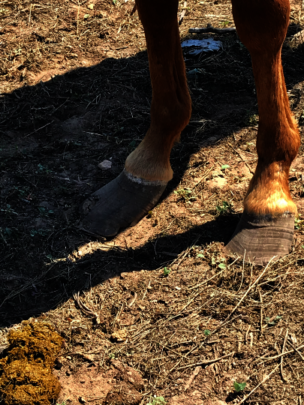 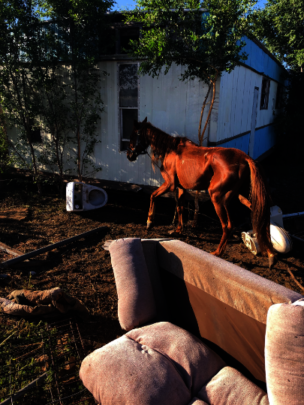 Tied to a trailer home amongst trash 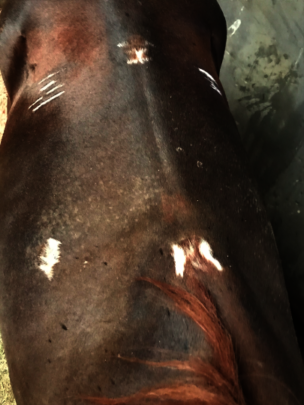 Scars from ill fitting saddle and/or no saddle pad 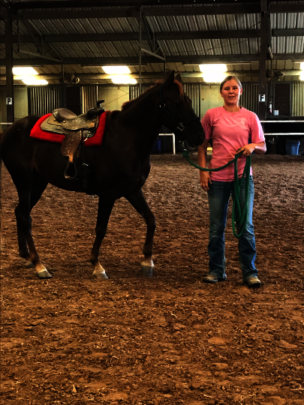 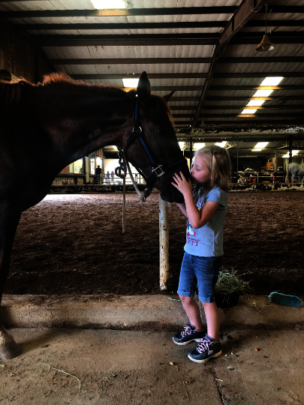 He is so sweet with small children

Divine Will Soon Be Home 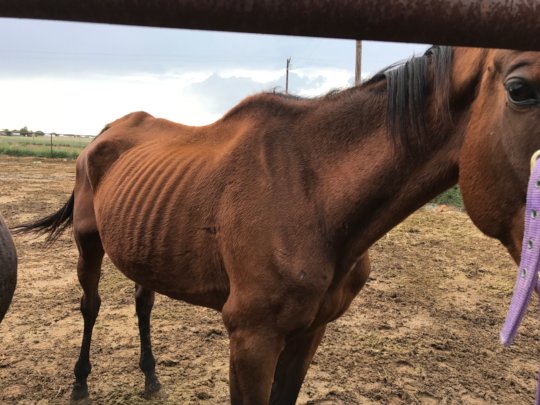 Divine came to Easy R Equine Rescue in October 2018.  Her owner had fallen on some unforeseen and difficult financial circumstances; and unfortunately, wasn't able to keep up with adequate feed and care. Divine was very thin and being chased off any available hay by the other horses where she was being kept.  After seeing photos of Divine, we agreed to assist in her care, but eventually the owner requested we take custody of her.  Determining that her situation was not going to improve any time soon, we chose to take her into the Easy R program.

She is a 20 year old Off The Track Thoroughbred, and was being ridden in playdays by the owner's children prior to her decline into poor physical condition. Her demeanor was gentle and she was well-behaved.  Fortunately, a supporter of Easy R immediately expressed interest in Divine and volunteered to foster her and start her road to recovery.  The foster parent is a small animal veterinarian at a clinic which also has a large animal veterinarian on staff.  Divine received all the medical care she needed, including a Caslicks procedure to prevent recurring uterine infections.

Divine steadily gained weight and strength.  The foster parent's college-aged daughter spent several months with her, riding canyon trails and even competing in a few local beginner level hunter/jumper shows.  At an adoption event in May of this year, Divine caught the attention of a young couple with a 9 year old daughter.  And, as is often the case, it was love at first sight.  The parents wanted to try out the situation by boarding Divine at a local riding facility and having their daughter take riding lessons to determine if it was a "good fit".  Well, it's been a great fit.  After the fence is completed at their country home, Divine will become a permanent member of their family, making a little 9 year old girl very happy.   We love happy endings.

We absolutely could not do what we do for horses like Divine without our supporters, donors, volunteers, and foster families.  Thank you so much for being part of our team!  Happy holidays to each of you! 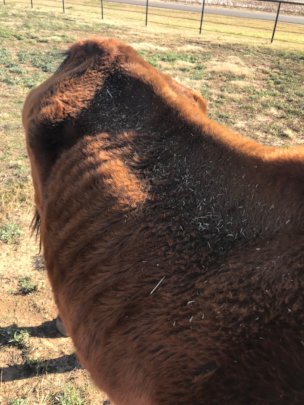 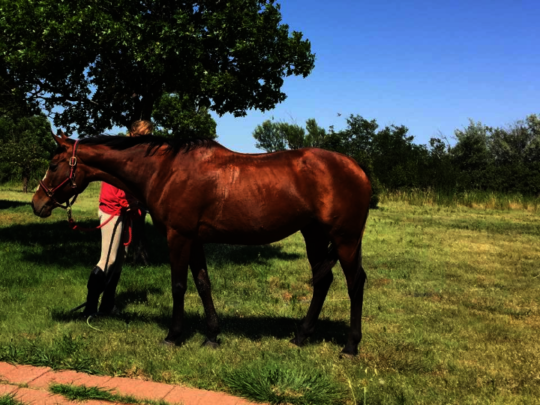 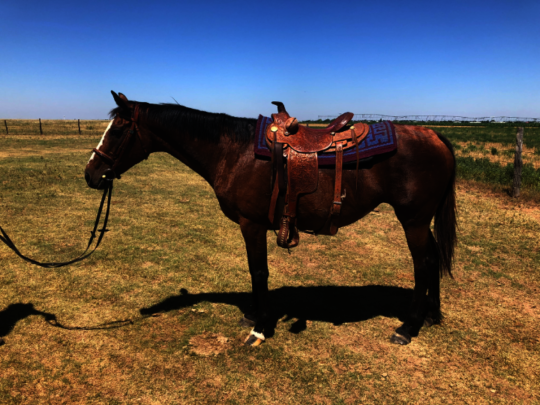 Prepping for a trail ride 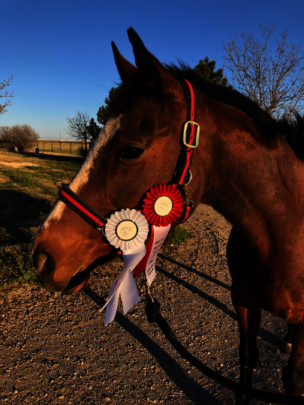 Won a ribbon at a local show 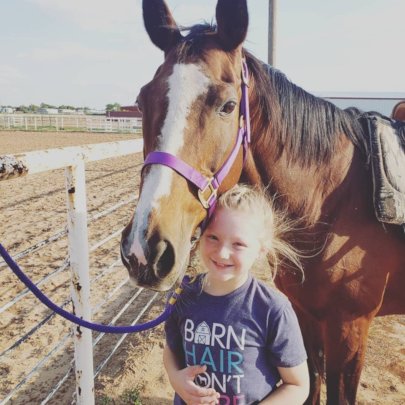 Nothing better than being loved by a little girl

Dakota Gets Some Friends at Easy R 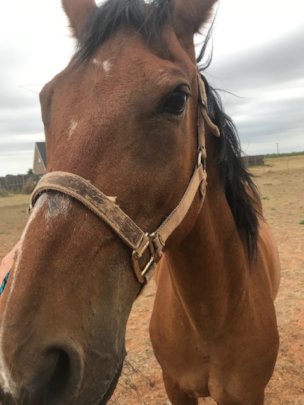 Dakota is the newest horse at Easy R Equine Rescue. We received a call from a land owner about 6 weeks ago who reported that his renter had moved out of town with the promise that he would come back to town to pick up his horse.  Four months passed and he never came back for him.  Fortunately, Dakota was on a piece of property where another renter threw hay for him and gave him water, so he wasn't as thin as most horses we get.  But it was obvious that the basic responsibilities of horse care had been neglected.  His feet were long and cracked.  His tail hair was so extremely matted that when we tried to get it untangled, most of it just fell off.  The halter had been on him so long that it had made a scar on his nose.  And per report of the land owner, Dakota had been in the field without companionship of another animal for 3 years.  Horses obviously survive without the presence of other horses, but they are herd animals and most do much better with a companion.

As with most of the horses we get into the rescue, we know nothing about Dakota's history.  When the dentist visits, we will get an idea of his age, which we suspect is in the early 20s.  He has a deformed right eye and has limited sight in that eye. He turns his head to look at things and people out of his left eye, which has caused what looks to be some muscle and bone imbalances--possibly arthritis. He choked on hay the first time we offered it, which indicates that his teeth are probably in terrible condition.  So, he is getting softened alfalfa pellets and senior grain until the dentist can see what is going on in his mouth.  He will be vaccinated, de-wormed, given supplements to help with joint comfort and probiotics to assist with good digestion.

What is most wonderful to watch is Dakota's  interaction with Ranger and Magi, the two horses at his foster home.  He likes Ranger.  But he loves Magi! He follows her around like her shadow.  And because she is such a sweet, kind horse, she doesn't mind.  She lets him go where she goes. As a herd animal, it has to feel so comforting to, after 3 years, have companions.

Dakota will get the best care at Easy R Equine Rescue.  And hopefully, someone will be interested in providing him a wonderful adoptive home.  He deserves one. 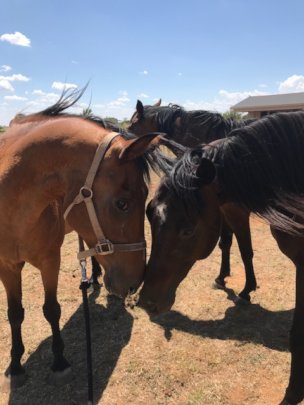 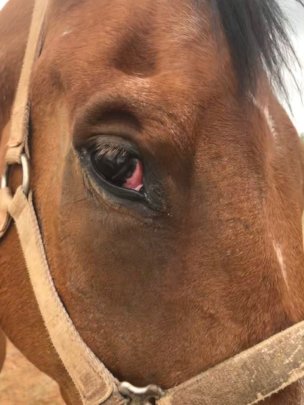 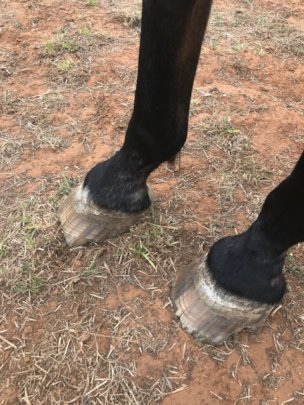 Feet prior to the farrier visit 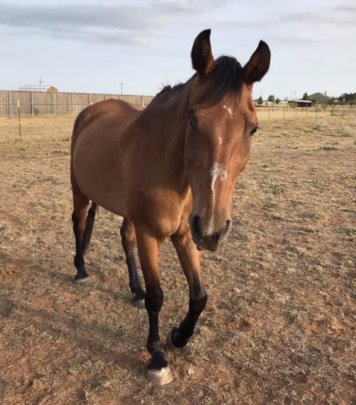 Must feel good to have that halter off