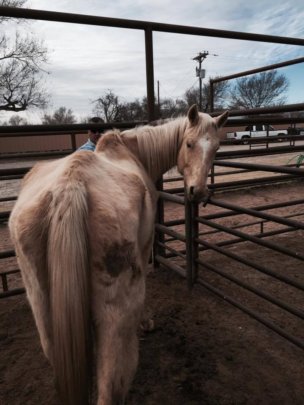 In February 2016, the Executive Director of Easy R Equine Rescue received a call from the Lubbock County Sheriff's Department. She could tell by the tone in the deputy's voice that the situation was serious.  Two horses had been picked up and both were in poor condition, but the young mare was extremely emaciated and malnourished.  The two horses would be held at a local veterinarian's office until the judge decided on the disposition of the horses.  The question to Easy R is always, "Do you have room.  Can you take them?"  These decisions are not ones we take lightly.  While we want to help every horse in need, that is just not reasonable.  There are too many.  But once we received a photo by text, the answer was yes.  Absolutely yes.

Echo was a 6 year old Palomino mare that had been in wonderful condition when her owners got her.  Her coat was shiny.  She was a healthy weight.  And there was light in her eyes.  Because of back to back extenuating circumstances, her owners stopped tending to her, giving her water, or feeding her.  A concerned neighbor lady who took buckets of water and some hay to her was the only reason Echo was still alive.  Her ribs could be counted because they protuded from the sides of her body.  And her muscles were atrophied around her hips, just leaving jutting bones.  Her coat was dull and in poor condition.  She had a cloudy spot in one eye that one could assume was from an puncture or scratch that had ulcerated.

Once the judge ordered custody to the sheriff's department, we accepted the horse at Easy R and she was immediately placed at a foster home that had fostered several horses for us before.  Her re-feeding program began to help her slowly and safely put on weight.  She was vaccinated, worked on by a farrier and an equine dentist. Her eyes were dull and her attitude lethargic.  We try to avoid attributing human emotion to horses and assuming they reason and think as humans do.  But it's hard not to wonder if a starving horse is scared.  If she wonders if each day will be her last.

Fast forward a year and 3 months.  Through the consistent feeding of a healthy diet, regular farrier visits, and a lot of love and attention from the foster family, Echo looks like a different horse.  And acts like a different horse.  She is energetic, attentive, and has life in her eyes.  Her coat is a golden blonde and is shiny and soft.  And her picture online catches the eyes of some children in East Texas, 9 hours away from Lubbock.  They convince their dad that Echo looks exactly like the Palomino mare they currently own and that they should drive all the way to Lubbock to adopt her. Well.  That's exactly what happened.  When the adoptive family pulled up at the foster home, a cute and mannerly 9 year old boy haltered Echo.  And they became instant friends.  Reports from the adoptive family included a story about Echo following this little boy like a puppy even to the point of trying to go into the house after him.  And a Facebook post and picture of the two with a caption of "best friends".  It can be assumed that Echo was never started under saddle, but since this family trains all their horses anyway, that was no concern to them.  She will be taught, loved, fed, ridden in parades, allowed to graze on lush East Texas grass and wade in the ranch lake. Best of all, she will never have to wonder if she will be taken care of and loved.  All's well that ends well? Maybe.  She had a really rough year prior to coming to Easy R that she should have never had to endure.  But amazingly, horses adapt and trust again.  Echo's journey is far from over.  But now it will be with a loving family who opened their hearts and home to this gorgeous mare.

We can say "yes" to horses like Echo because of donors who give through Global Giving.  Thank you for being a part of Echo's journey.  All sugar-coating aside, it is very expensive to rehabilitate a horse that is in very poor condition.  Many times we take them on faith, hoping and praying that donations will come in that allows us to continue resuce and rehabilitation.  We are so very grateful those prayers are answered through our generous donors. 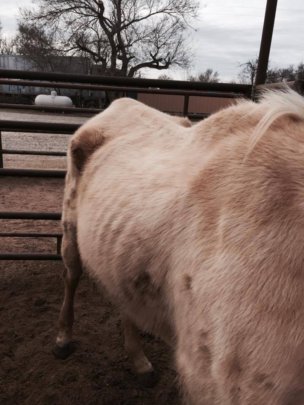 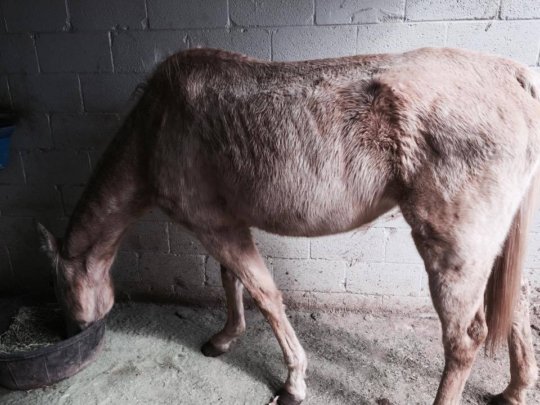 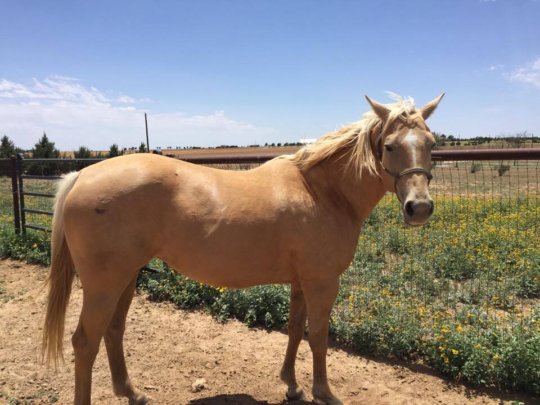 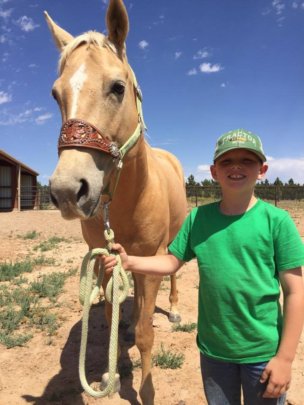 Ace Gets His Forever Home 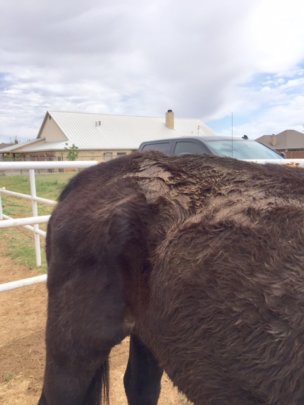 In April of 2016, Easy R Equine Rescue received a call from the local sheriff's department telling us they were removing two horses from an owner on an emergency basis.  The two horses were tied to a pole in a front yard without food or water.  They were both thin, but the older gelding horse was emaciated and in very poor condition. The owner apparently was in jail and, obviously, could not take care of them.  He voluntarily gave custody of the two horses to the sheriff's department.

Easy R agreed to take the two horses and quickly made arrangements with one of our foster homes that could accommodate taking them. Ace, the older male horse was extremely thin with all of his ribs showing and his hip bones jutting out.  His hair was coarse and dull and had not started to shed despite it being springtime already. Malnourished horses will hang on to their hair as a protective measure. We worked with the foster parents on an appropriate feeding plan for Ace, and quickly had him vaccinated, de-wormed and seen by the farrier and equine dentist.  Because of his age and his poor condition, Ace was placed on grain and pellets specifically formulated for senior horses.

Under the care and attention of the foster family, Ace quickly started gaining weight.  He finally shed his dull, coarse hair and it was replaced with a black shiny coat.  His eyes became brighter and he was more energetic and playful.  His foster parents even let him into their backyard to "mow the lawn".  Ace has been a very gentle and patient horse. He wants to interact with people and is more than willing to stand for grooming and petting.  He also got along well with his fellow herd mates at the foster home.

Ace caught the eyes, and stole the hearts, of a neighbor family down the street from the foster home.  In fact, they fed the horses when the foster family was out of town.  They watched Ace go from a starving, bony horse to a healthy and happy old boy.  Knowing that because he was an older, arthritic senior horse, it woud be difficult to secure an adoptive home for Ace.  And since they had gradually fallen in love with him, they wanted to adopt him and let him spend the rest of his years being spoiled at their home, just like their other horse Sugar. The Robertson family recently adopted Ace and he and Sugar act as if they have been best friends for years.  He has settled in without one problem.  He will get the rest and retirement that he deserves.

The expenses for older horses like Ace are costly.  Senior feed is approximately $5 more per bag than regular grain.  Since his teeth were ground down, he could not eat regular alfalfa and grass hay, so we had to supplement with alfalfa pellets or cubes.  He also needed medications that manage pain and inflammation from arthritis and lameness.  Because of donors through our Global Giving project, we were able to pay for all the care Ace needed.  It is a very labor and cost intensive to rehabiliate horses like Ace back to health.  But it is so worth it and we could not do it without the generous donations of our supporters.  Thank you so much. 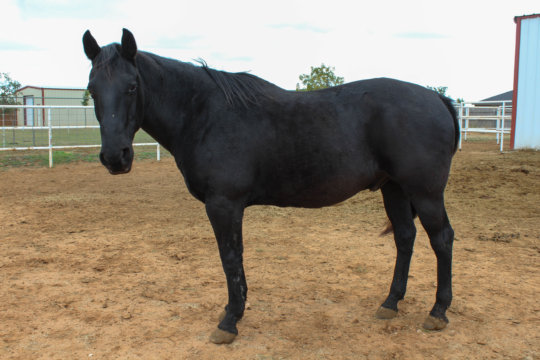 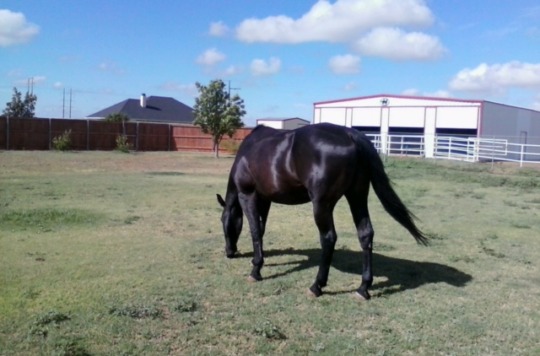 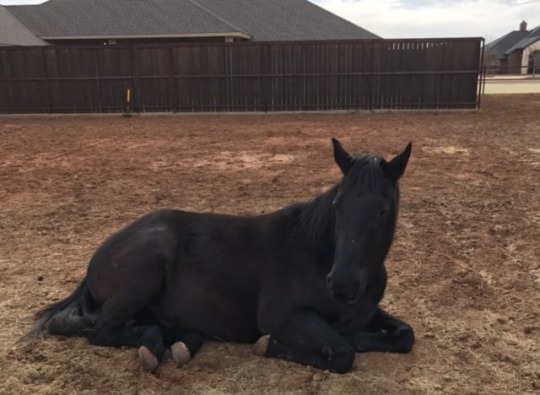 Resting at his new forever home 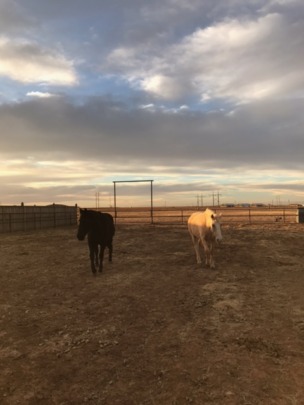 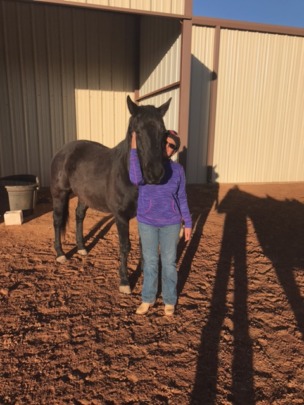 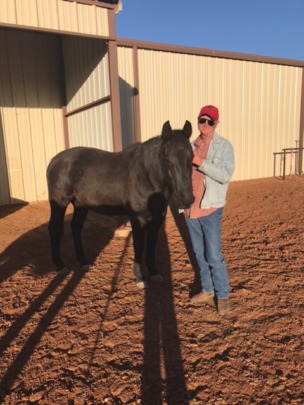 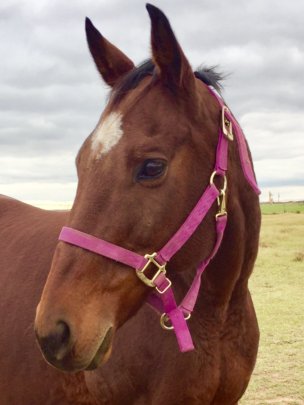 Horses come into Easy R Equine Rescue in all sorts of conditions.  A few are relatively healthy, but most are malnourished, injured, and/or ill.  Even though it is still hard to see a horse in these conditions, we aren't surpised. That's what we do--rescue neglected and abused horses.  In April of this year, we received a call from the Lubbock County Sheriff's Department notifying us they were in the process of removing 6 horses from an owner that was being neglectful, and completely resistant to any help or remediation of the situation.  Three of the horses went back to a previous owner and three came to Easy R.  We placed each horse in a different foster home and began the process of rehabilitation.One of the horses is a 16 year old Thoroughbred mare, whose foster mother renamed Blessed after a few days of caring for her.  Blessed is a "typical" Thoroughbred--highstrung, often anxious, and resistant to new things.  The foster mother has worked diligently with Blessed to walk calmly beside her while being led on a halter, to not try to jump out of the stall when being sprayed with fly spray, to allow a blanket to be put on to keep her warm, and to tolerate eye medication for an eye condition.  She is still very convinced that the farrier is to be feared, and needs sedation in order for her feet to be trimmed.  Blessed has become fast friends with Robbie, the foster mother's 27 year old gelding that is in the pasture next to her.  Blessed responded very well to her new feeding regimen and started putting on good weight.  And more weight.  And more weight.  Her belly started extending toward the ground and not just out to the sides, which is typical with weight gain in undernourished horses.  We joked that she was gaining so much weight that she looked pregnant.  A visitor to the foster home who was very familiar with Thoroughbreds took one look at Blessed and said to the foster mother, "That mare is pregnant".  It was then we remembered one of the other horses seized by the Sheriff's Department was an Arabian stud horse.  So....after a trip to the vet yesterday, it was confirmed that, indeed, Blessed is going to have a baby. Even though foals are about the most precious things, this baby will provide some challenges for Easy R Equine Rescue.  We will have increased expenses to ensure quality care for Blessed and the baby.  The foal will need safe handling and eventual training.  And finding an appropriate adoptive home for a Thoroughbred/Arabian cross might be a bit challenging.  But, Blessed and her little blessing will receive the utmost attention and excellent care.  We say it so often, but it never ceases to be true--we cannot do what we do without donors who support and believe in our mission.  Thank you! We will keep you posted on the little blessing that should be arriving in February or March of 2017. 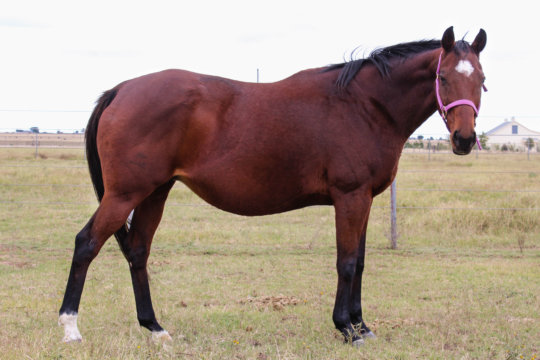 Blessed and her big belly 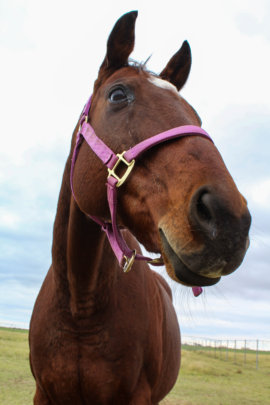