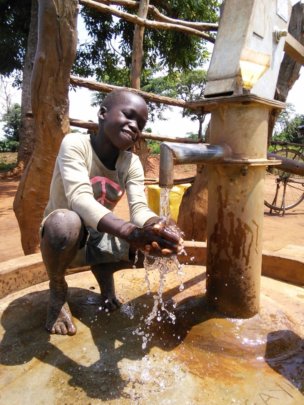 An excited resident of Angayiki B with clean water

This summer, progress has continued in our mission to provide universal access to safe water in the Apac District of Northern Uganda. In June, Lifeline finished installing the hardware components to rehabilitate and upgrade thirteen water wells in Apac in partnership with Thrive Networks. As a result, more than 7,000 household beneficiaries and over 3,000 school children have gained improved access to drinking water.

At the onset of the project, three wells were completely non-functional and not delivering water, while the other ten were presenting widespread structural damage, functionality issues, and potentially corrosive pipes. In order to improve the performance of these hand pump-equipped wells and prevent them from falling into future disrepair, Lifeline installed rust-proof stainless steel pipes and rods at all thirteen wells, and even fully replaced the pump heads at two sites. Community members were also engaged to take active roles in the long-term oversight and management of their wells to ensure this project has a lasting impact. For more information on Lifeline’s community training and preventative maintenance initiatives in this project, see our May 2017 field note.

The hardware improvements have already made a significant impact in terms of the distances residents are traveling to collect water. Prior to the intervention, residents with non-functional wells most commonly reported traveling between 1-3 kilometers (.6 to 1.8 miles) each way to collect water from other sources. Since these wells are centrally located in the communities and have now been repaired, 98% of survey participants indicate their distance traveled to collect water has been reduced to 1 km (.6 mi) or less, with 38% only traveling within 400 m (.25 mi) of their homes. A standard 20-liter jerrican weighs 40 lbs when completely filled at the well, so shortening the distance to collect and carry this water makes a meaningful difference in the lives of Apac families.

By reducing the distances that families – particularly women and young girls – are forced to travel to collect water, communities are now benefitting from time savings, as well. Before the project, most residents indicated spending over two hours each trip to collect water. Lifeline’s intervention has cut this time in half, with 89% of surveyed households reporting a maximum of 1 hour spent per water collection trip, nearly half of whom are able to complete the task in 30 minutes or less. With this time saved collecting water for their homes, women and girls in Apac are now able to spend more time learning in school, earning household income, and connecting with their families and communities.

Improving the hardware materials of these wells has likewise resulted in improved water quality for the thirteen villages. During the baseline survey, community members reported issues with bad water color, smell, and taste, as well as rust in the water. Since the repairs and pipe upgrades were completed, reports of these issues have dropped by up to 90%, and overall 95% of survey participants across all thirteen villages rate their water quality as good.

We celebrate these successes not only for Lifeline and its partner communities, but for all of those who have generously donated to make this work possible. Thank you for supporting families in Apac to live healthier lives and build stronger communities through sustainable access to water. 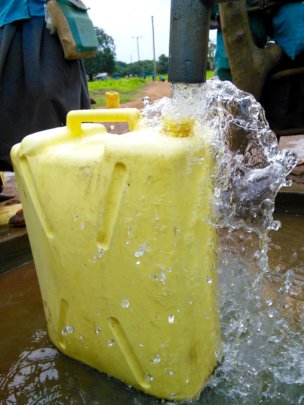 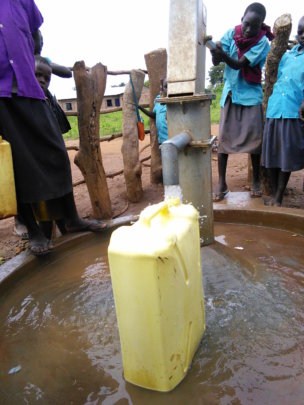 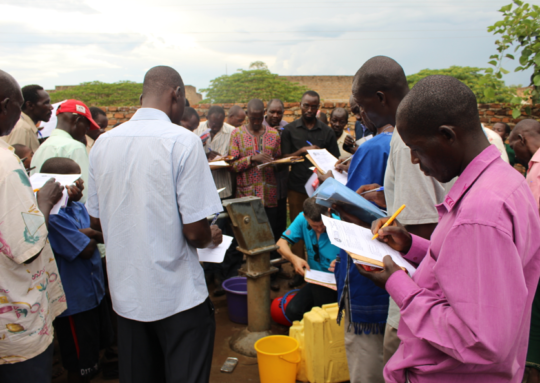 At the core of Lifeline’s work in rural communities of northern Uganda is a goal to empower villagers to independently maintain their water infrastructure for years to come. This aim towards sustainability requires looking beyond immediate water access to plan for the long-term maintenance of rural water wells.

In partnership with Thrive Networks, Lifeline is now piloting a preventative maintenance framework in the Apac District of northern Uganda to fix existing gaps in the local maintenance infrastructure. What exactly does this mean?

In many ways, a newly drilled water well is similar to a new car. Over time, both a car and a well become subject to wear and tear and will require maintenance. To maintain a car, you would simply take it to a mechanic every few months to change the oil, replace the air filters, and rotate the tires. Failure to do so may cause the car to suffer mechanical issues and shorten the lifespan of the vehicle. A well in rural Uganda likewise requires routine maintenance to function properly and avoid falling into disrepair; chains must be greased, washers replaced, and bolts tightened. However, access to water well maintenance in rural Uganda is not so readily available. When a well breaks down in Apac, a community will face a complex web of challenges to repair it, including:

Lifeline’s newly launched project with Thrive Networks involves a combination of construction and community training initiatives to prolong the lifespan of local water wells and prevent breakdowns from disrupting community water access. In order to prevent wells from malfunctioning, Lifeline is rehabilitating and upgrading pipes at wells in 13 villages with rust proof stainless steel and PVC materials that last longer than traditional galvanized iron pipes. These hardware upgrades will improve access to safe water for 7,244 household beneficiaries and 3,257 school children.

To ensure the surrounding communities are prepared to manage these upgraded water wells, from January to March, Lifeline trained each Water User Committee (WUC) from the 13 villages (50 women and 67 men in total) on how to promptly report pump malfunctions and routinely collect and deposit community maintenance funds in a village bank account. Additionally, a total of 494 community members were sensitized on the importance of operations and maintenance procedures and the communication ladder to report breakdowns.

In addition to these community engagement initiatives that involve residents in the upkeep of their wells, Lifeline seeks to strengthen the capacity of local hand pump mechanics to maintain wells across Apac. To this end, from March 28-30, Lifeline’s Senior Technical Advisor and hydrological crew conducted a 3-day training program for 27 local mechanics. The program involved hands-on participation and lessons covering basic units and calculations, well construction, basic principles of mechanics, diagnosis, troubleshooting, repairs, and record keeping. Participants’ comprehension of the material was then examined in the form of a written test. In the coming weeks, these mechanics will conclude the training program by participating in the five well rehabilitations and eight pipe upgrade activities under this project.

With continuing support from our generous donors, Lifeline will work closely with district government officials and the Apac Hand Pump Mechanics Association to scale this project and bring high quality maintenance services to more villages across the district. Thank you to all of those who enable Lifeline to deliver clean water and long lasting community impact. 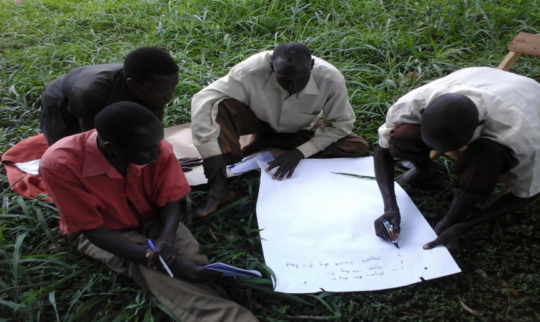 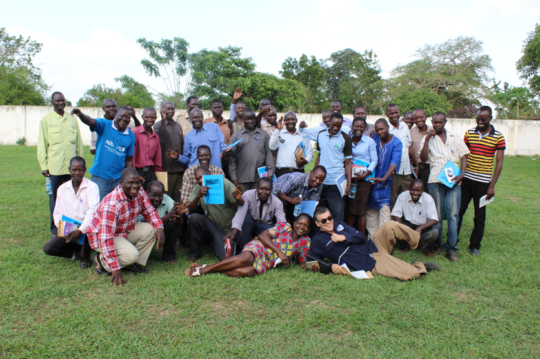 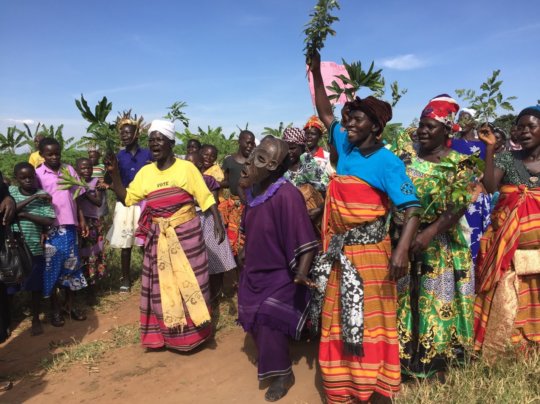 As we reflect on the successes of the past year and look forward to exciting new opportunities to collaborate with rural communities across Northern Uganda in 2017, Lifeline is thrilled to report its most recent achievements.

Throughout December and January, Lifeline completed the transfer of 24 newly drilled boreholes to communities across the Apac District in partnership with the Rotary Clubs of Spring Lake, Michigan and Lira, Uganda. In total, these boreholes are now benefitting 11,800 villagers who are no longer forced to drink from contaminated water sources or to travel long distances to fetch water.

Lifeline’s determination and technical expertise were tested throughout this project, particularly at the village of Zanzibar B. For years, this community has struggled to install a borehole that would provide sustainable access to clean drinking water. On three occasions, the Apac District government attempted to drill for water in this village, but was unsuccessful. In light of the District’s challenges, Lifeline stepped up to the task, but also faced dry hits on the first two drilling attempts. Finally, on Lifeline’s third attempt (the sixth attempt overall) the hydro team tapped water and was able to install stainless steel piping and a hand pump.

This borehole is an astonishing 78 meters in depth (nearly 256 feet), one of the deepest Lifeline has ever drilled. A typical deep well reaches between 45 and 60 meters in depth, while a shallow well ranges from 18 to 30 meters. The immense depth of the Zanzibar B borehole means that it will, in turn, demand greater oversight and maintenance from the community to ensure its functionality in the years ahead.

To see that the village succeeds in maintaining this water point, Lifeline trained 9 community members to serve on the Zanzibar B Water User Committee and performed a special “marriage” ceremony to celebrate the community’s lifetime commitment to clean drinking water. This “wedding” brought together Lifeline and the Zanzibar B community in a union to protect and preserve the functionality of the borehole in partnership with the District Water Office. After vows to maintain the site were exchanged, Lifeline continued the celebration with games like the Pumping Olympics and Guess the Price to emphasize proper pumping techniques and routine maintenance tasks that will sustain the longevity of the water point.

After all of the years that Zanzibar B residents struggled to access clean water, Lifeline is proud to continue working closely with this community to ensure that this borehole supports their good health for years to come.

This past December, Lifeline distributed 183 EcoSmart wood stoves to South Sudanese refugees at camps in the Kiryandongo District of Northern Uganda. In collaboration with the United Nations High Commission on Refugees, these stoves were delivered to particularly vulnerable camp residents identified as Persons with Specific Needs (PSNs), including 68 single mothers, 55 elderly refugees, 25 persons with disabilities, 30 at-risk women, and 5 individuals with severe medical conditions.

Lifeline’s EcoSmart Rural Wood Stove offers approximately 42% fuel savings compared to a traditional three-stone fire, allowing users to cut their use of wood fuel nearly in half. For those tasked with collecting firewood for their families, typically young women and girls, this means up to three hours of time saved each week and a reduced exposure to sexual assault, which often occurs as girls are traveling alone in rural areas to fetch firewood and water.

One stove beneficiary, Joseph, appreciates how Lifeline’s stove will ease the challenges he faces with collecting firewood and cooking in a wheelchair. “It has been so difficult for me to collect firewood like other able bodied people,” he says. “I am thankful to Lifeline and UNHCR for selecting me as one of the beneficiaries of a stove that uses very little firewood and cooks faster. I can now worry less about spending too much time out in the field collecting firewood.”

In the coming weeks, Lifeline will deliver another 67 EcoSmart wood stoves to the refugee camps of Kyriandongo to impact a total of 250 beneficiaries through this program.

Lifeline would like to thank all of those who generously contributed to bringing clean water and cooking solutions to Northern Uganda. This work would not be possible without you! 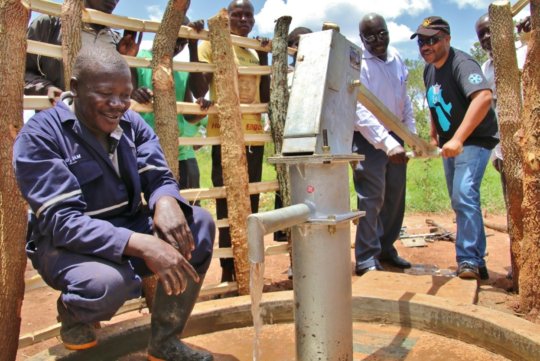 Lifeline testing the pump at Zanzibar B 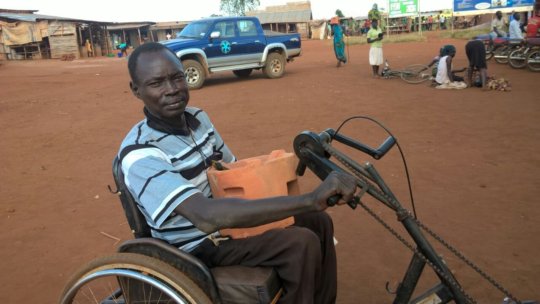 Lifeline/UNHCR distributing FES stoves to refugees
‹ 1 2 3 4 ›
WARNING: Javascript is currently disabled or is not available in your browser. GlobalGiving makes extensive use of Javascript and will not function properly with Javascript disabled. Please enable Javascript and refresh this page.