The Voice of Farm Talk 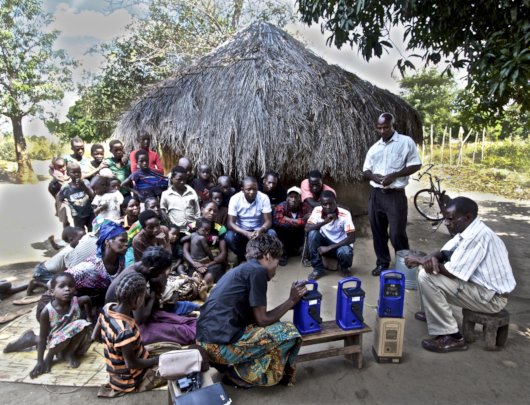 Over the years and in many countries we’ve worked with various radio content creators, producers and broadcasters. There is none better or more respected anywhere in Africa than Filius Charo Jere. Filius is the leader creator, interviewer, producer and voice of Farm Talk in Zambia.

Farm Talk is the popular weekly radio show that has been running for more than seven years in Eastern Zambia. It's funded by our partner Community Markets for Conservation (COMACO). Broadcast on Breeze FM in Chipata, Farm Talk is produced in the local language, Nyanja.

Travelling with Filius is like traveling with a rock star. More than once we’ve driven into a rural village and people stare at us in suspicion, especially if there’s a “muzungu” (white person) in the vehicle. Then Filius speaks. People recognise his distinct warm and friendly voice and shout to one another, “Filius is here.” And they come running. Everyone wants to shake his hand or ask him a question.

To get a sense of Filius first hand, click on the link below and watch Filius on video. He talks about the value of Lifelines' radios to farmers.

Filius uses his time in the field to find out what is on farmers’ minds, what their problems are and what successes they’ve had. He interviews at least on farmer from a COMACO farming cooperative. The final 15 minutes of Farm Talk is an interview with a COMACO farmer and question and answer time.

This format was especially helpful during the recent invasion of the Fall Army Worm, which devastated thousands of acres of corn (maize) crops. Farmers listened to the programs and called in their questions which were answered on the spot by Filius and his team.

Filius was born in and spent his early years in Zimbabwe. But from his high school days, he’s lived in Zambia. Filius spent many years with the Zambian Ministry of Agriculture as a government extension worker and broadcaster. He’s worked in every corner of the country and has settled in the town of Chipata with his family where COMACO is based. 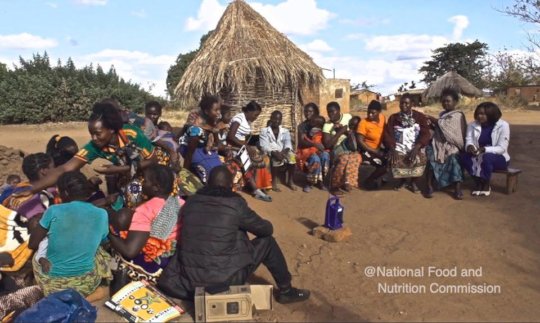 We reported in our last update that Zambia’s National Food and Nutrition Commission (NFNC) made a call to action for 50 more Lifeplayer MP3s.  This is because the 1000 Days of Motherhood audio programs are not only popular with mothers (and some fathers), but also results are being seen. Evaluations are being undertaken right now to document the reduction in childhood stunting and the improvments in mother’s health as a result of this wonderful, inclusive initiative.

To help Lifeline Energy raise additional funds for units, the NFNC surprised us with a video showing the mothers’ groups listening to the Bushes that Grow series on the Lifeplayers.  The local language that you’ll hear being spoken is called Nyanja, one of the largest language groups in Zambia.  It’s also the lingua franca next door in Malawi (where it is called ChiChewa).  The video link is below.

When you watch the video, which is shot in the Eastern Province near the town of Petauke, you’ll notice people calling the Lifeplayer units, “the radios”. This isn’t uncommon for people to do so, but what they mean Lifeplayers. That is evidenced from the Lifeplayers being used in the video.  Please do watch it as it will give you an excellent idea of the how the listener groups work and how our Lifeplayers have been deployed that you have helped to fund.

The Eastern Province suffers one of the country’s highest rates of childhood stunting caused by malnutrition. Earlier in the year, it also experienced a cholera epidemic, which took the lives of of an estimated 1,500 Zambians.  More than 80% of the population is engaged in subsistence farming. It’s an area with low rates of literacy for women. 1000 Days of Motherhood is so critical to mothers gaining health and nutrition information to ensure that their child, from conception is healthy.

To date, NFNC surveys have revealed that around 12,560 households have been reached so far. The program will grow proportionately with the number of new Lifeplayer units.  As we have noted before, they are covering all training and distribution costs so all funds that Lifeline Energy raises can go towards Lifeplayer units and memory cards.

We hope that that you enjoy the video and that you’ll continue to support this really wonderful initiative to benefit vulnerable Zambian families.

Her Voice Formally Launches in Marsabit 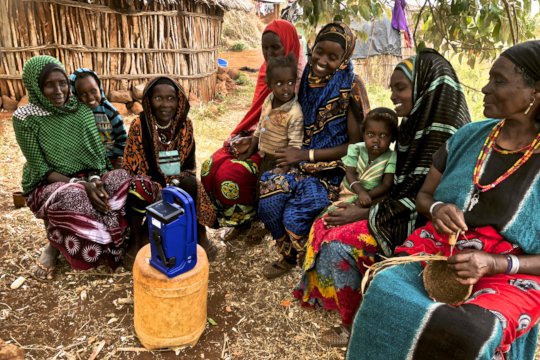 We call this initiative Her Voice as it gives women in deep remote areas in Northern Kenya an opportunity to make her voice heard.  And after months of unforeseen delays, it has launched in Marsabit County in collaboration with our partners Horn of Africa Development Initiative (also a GlobalGiving organisation).

Marsabit County is not only Kenya’s largest, it’s also one of its poorest with some of the highest levels of female illiteracy 90%.  This vast area, which is twice the size of Maryland, has a population of only 300,000, most of whom are livestock keeping pastoralists.  Some are nomadic.

Historically, pastoral women have had negligible participation in communal development and decision-making. Socio-economic, cultural and religious biases (whether Christian or Muslim) have relegated females to the periphery and their contributions to society are not fully appreciated. They have been subjected to harmful cultural practices like female genital mutilation (FGM), early/forced marriage, and lack of access to education, health care and other services.

Due to the increasing frequency of drought and the migration of men to cities seeking work, more women are heading households. Women are participating in non-traditional activities such as livestock trading, petty trading of goods, and income generating activities like charcoal making.  And yet very few are functionally literate in Swahili and even fewer in English. They live on the frontline of climate change and their traditional way of life is disappearing.

Now these pastoral women, who never have had the opportunity to listen to the radio, are listening to targeted audio content in their own language, in addition to tapping into the local stations.  Most are either Borana or Gabra speaking.  They also are recording their own local knowledge and voices singing.

They need new knowledge and to build new skills. The Lifeplayers are being integrated into HODI’s community resilience initiative.  The women will learn basic literacy and numeracy, have access to maternal health information and become active participants in climate related initiatives. Further they'll be able to listen and record programs in Gabra and Borana for playback later to their community.

While we were in Marsabit we trained HODI’s projects team at their Marsabit  office, who were highly enthusiastic about the Lifeplayers.  One person remarked that the Lifeplayers would help make their jobs much easier.   In addition, we started the distribution process in local villages to great delight.

We sincerely hope that you will continue to support this high-impact and much needed initiative. 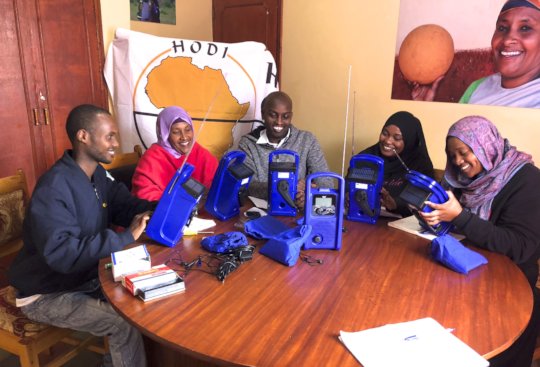 Team HODI at Lifeplayer training
‹ 1 ... 5 6 7 8 9 10 11 12 ... 44 ›
WARNING: Javascript is currently disabled or is not available in your browser. GlobalGiving makes extensive use of Javascript and will not function properly with Javascript disabled. Please enable Javascript and refresh this page.