An update from Palu 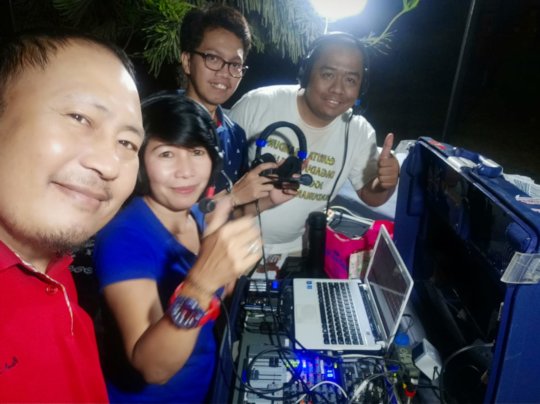 On 28 September, a 7.5 earthquake hit Sulawesi Island in Indonesia after a series of smaller foreshocks. Then a powerful tsunami struck the densely populated town of Palu. The combined effects of the quake, tsunami and mudslides left at least 2,500 dead, a further 1,000 missing and around 210,000 displaced. Most displaced families had lost everything.

The quake hit during rush hour at 18:00 when the roads were crowded. Moreover, it happened to be a festival day and hundreds of people had gathered on the beach. The government immediately issued a tsunami warning for .5 metres, but it was lifted. The tsunami hit later that evening. When it stuck it was more than seven metres is some areas, causing extensive damage and loss of life. It was discovered that the tsumani detectors had been badly damaged in the quake.

Electricity was immediately knocked out and more than 500 wireless communication towers were damaged, as were the radio stations.

Within hours, the Communicating with Disaster Affected Communities (CDAC) Network swung into action. Lifeline Energy is a CDAC partner. A call went out for power-independent radios from our friends at First Response Network (FRR). FFR focuses on meeting the information and recovery needs of disaster affected communities in languages they understand. Further, FFR estimated the immediate need to be 10,000 units for families or small cluster groups.

FRR had a partnership with a local commercial station, Radio Nebula on 101FM and rebuilt the station and started running humanitarian radio programs in nine days with 1kw of power. Their signal is very strong and can be heard across most of the affected area. It was essential that the government and aid agencies, particularly the Indonesian Red Cross, communicate regularly with survivors on all sorts of topics from locating missing persons to food deliveries.

FRR had a small supply of 200 solar radios in stock and were able to distribute them right away in cooperation with the Indonesian Red Cross (PMI) and the International Federation of the Red Cross and Red Crescent Societies (IFRC).

Lifeline Energy is grateful for the timely response to the disaster from GlobalGiving. We received a grant from GlobalGiving quickly and were able to start production on 1,000 of our Polaris solar and wind-up radio emergency radio-lights. It was the pre-Christmas crunch time for our factory and manufacture took longer than it normally would have. Also during the manufacturing process, the PMI secured permission from the Indonesian government to bring in the Polaris units for distribution by IFRC.

The IFRC distribution team created a distribution plan to give priority to the most vulnerable – women, elderly, child families and the disabled. They also noted prospective names and locations of those most in need. A register was created to identify where and to whom the previous radios had been distributed so as to not to duplicate.

It is extremely frustrating that the Polaris units have been detained in Indonesian customs for these weeks - for no known reason. FRR, IFRC and PMI have been in continual contact with the Indonesian authorities and they have not yet released them. Lifeline Energy has been assured that all the necessary permissions were received well in advance to ensure this would not happen. We are reliably informed that other aid items have also not been released.

IFRC told us that they are ready to distribute the units and have a plan in place to do so. They are counting on the units will be released the first week of January. This is indeed very frustrating and surprising to us all.  It is worth noting that no corruption is suspected, only onerous bureaucracy.

Why music is important for early childhood learning 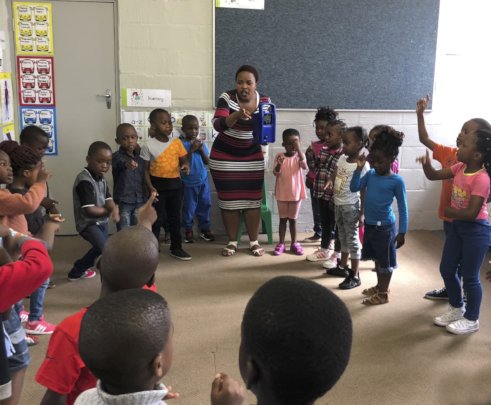 Cape Town class listening to songs on Lifeplayer
One of the reasons we love the SoundStart project is because of the music. The songs, which are pre-loaded onto our Lifeplayer MP3, are created by Wriggle and Rhyme and resonate with children irrespective of if they speak English or not. Wriggle and Rhyme is based near us in Cape Town.
We’ve seen for ourselves what the experts have told us - music is a phenomenal teaching tool. Whether in rural village Zambia, a prison day care center in Kenya, or in a refugee camp pre-school, the Wriggle and Rhyme songs get kids moving and put a smile on their face.
And, with progress in the field of neuroscience over the past decade, there is now much more data to back up what we’ve witnessed. Functional MRI scans allow neuroscientists to see what’s happening in the brain, when engaged in various activities. What being discovered is that music is the one activity that lights all areas of the brain simultaneously. It gives the brain the equivalent of a full body workout!
This is especially exciting as it confirms what teachers have known all along – structured and intentional musical activities are powerful tools for learning and development. Here are many ways that music exercises the brain:
1. Memory - music has a way of embedding information into our memory in a powerful way – not just the information, but often the circumstances as well.
For example, a child may struggle to remember a poem, but as soon as it’s put to music, it can be easily recalled. This means that music can be used to embed learning into the brain in a positive and safe way, which a child can then access at a later stage.
2. Language and listening – music connects the language center of the brain. It’s a powerful tool to increase vocabulary, improve auditory processing, improve speech and even feed into early literacy skills, needed for learning to read at a later stage.
3. Emotions - music has the ability to make us feel positively and even happy because it connects us with our emotions. Music can be used, not only to help children identify and express their emotions, but to give them tools to regulate their responses.
4. Movement - music creates movement. Intentional movement to music promotes fine and gross motor skills as well as hand-eye co-ordination. All of this stimulates oxygen flow to the brain, setting up the brain to concentrate and learn.
5. Social skills - team based activities promote social skills such as working together, sharing, etc. However, music is unique because it can incorporate emotional awareness into the social aspects – especially sensitivity and consideration to those around us. Just like a group of instruments is full of unique and beautiful sounds, they need to work together with sensitivity for the greater good.
Music-based learning resources give children the opportunity for a culturally rich learning experience, tapping into many areas of the brain and stimulating development, as a result. For GROW with Educare pre-schools and day care centers where our Lifeplayer MP3 units are placed, music is an ideal medium. Many learners are the children of immigrants and do not share a common home language.
SoundStart is undergoing its first formal evaluation now and we’ll be able to report that in our next update. Stay tuned and thank you for your continued support.
Nov 30, 2018

Fathers are listening, too 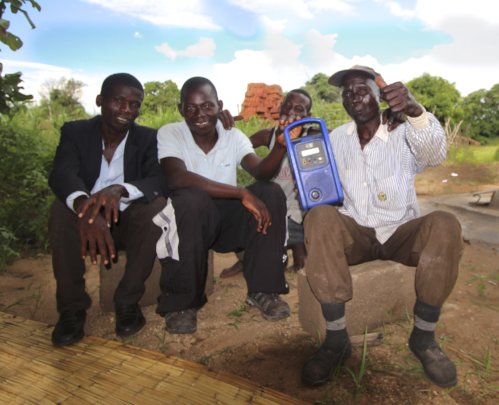 Zambian father listeners
Once before we reported on fathers are listening to the Bushes that Grow audio content for the 1,000 Days of Motherhood project. Reports continue to come in from the field from Zambia’s National Food and Nutrition Council (NFNC) that fathers are still actively participating. In the Western Province, Wankambu, a father of four, said that the men wanted their very own group!
It's encouraging to hear that fathers are keen to learn about nutrition for their families. Family nutrition has long been consideredthe preserve of mothers. Zambia has one of the highest rates of childhood stunting in the world, due to under-nutrition. Fathers, many of whom are farmers, pay a critical role in family food security.
The NFNC has already developed a second series of Bushes that Grow. This time, unlike for the first set of programs, they included feedback from dads. They have also designed a short listening guide and feedback form for the districts. The focus of the new programs is still nutrition, in particular the importance of good nutrition for pregnant mothers and young children and the role that fathers can play is a part of it. The new programs also include easy recipes anyone can follow.
The role that our Lifeplayer MP3 units are playing can’t be under-estimated either. Priority placement is givento deep rural districts. These are subsistence farming communities, often reached by dirt roads, with no access to electricity. Most families don’t even own radio sets and they can’t afford to repeatedlybuy batteries. In addition, both men and women strongly prefer listening in a group and being able to discuss the content afterwards.
Each listener group, already builds on community self-help groups. On average, each group is between 15-20 listeners and they decide on a name and when and where to meet. One group calls itself the Blessing Group, another Twikatani (working together), another Chikonki (love in Bemba) and another Taonga (thankful in Nyanja).
The First 1000 Days of Motherhood initiative is in urgent need of additionalLifeplayer units. Please continue to support this trulyhigh-impact, high-need project.
‹ 1 ... 4 5 6 7 8 9 10 11 ... 44 ›
WARNING: Javascript is currently disabled or is not available in your browser. GlobalGiving makes extensive use of Javascript and will not function properly with Javascript disabled. Please enable Javascript and refresh this page.