Pets belonging to the homeless are the most loving 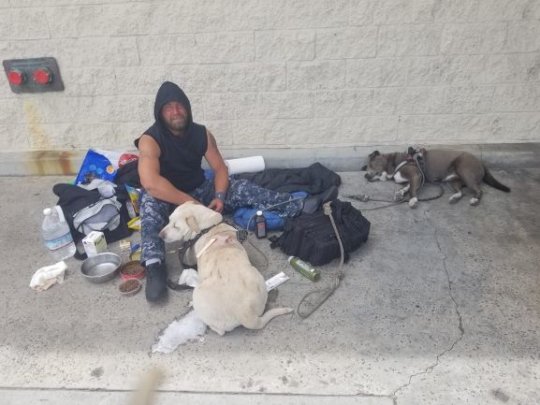 Feeding Pets of the Homeless believes in the healing power of companion pets and of the human/animal bond, which is very important in the lives of many homeless. They find solace, protection and companionship through their pets. They care for their pets on limited resources so they themselves have less. Our task, nationwide, is to feed and provide basic emergency veterinary care to their pets and thus relieve the anguish and anxiety of the homeless who cannot provide for their pets.

Emergency Veterinary Care is our most expensive budget item.  Budgeted for this year, $300,000, we have to limit treatments to $25,000 a month.  Once reached, we have to put clients on a waiting list, unless it is a true emergency like the two cases in this article.  As of today, we have already spent over $129,000 on emergencies.   It is supporters like yourself that have made it possible to help pets of homeless people across the country.

Chris and Thor have been in Carlsbad for a month.  His wife is currently in the hospital. They were living in his car before it broke down, but now he lives on the street with Thor near the hospital.

Chris arrived at the Carlsbad Animal Hospital with his sleeping bag and everything he owned in a backpack. A dog who jumped out of a car outside of Catholic Charities where he was getting a daypack of food and attacked his 8-year-old Shepherd mix, Thor. Thor’s back right leg had puncture wounds and a gash that required surgical repair.

Pets of the Homeless provided $771.89 in funding for the laceration repair and we were able to neuter Thor. Our Veterinary Partner donated $385.00 in services to assist Chris and Thor.

On May 1st, 2019, John called Pets of the Homeless because his dog Whitey had a deep gash on his back. Whitey is a two year old neutered Labrador mix.  John does everything he can for his pets and he makes sure their needs are met before his own. John and his dogs sleep on the streets in San Diego. He learned about Pets of the Homeless through an Animal Control Officer who took John and Whitey directly to our veterinary hospital partner in El Cajon. John states Whitey sustained the injury when another dog attacked him.  Although John always keeps his pets on a leash, not all pet owners do the same.

The truth is these innocent pets have no home and all they have is their best friend, their owner who is also homeless.  And there aren’t many places where the pets can get help.  Most homeless shelters do not allow pets.

Will you help us save the life of pets like Whitney and Thor?  You won’t just save one life.  You might save two. 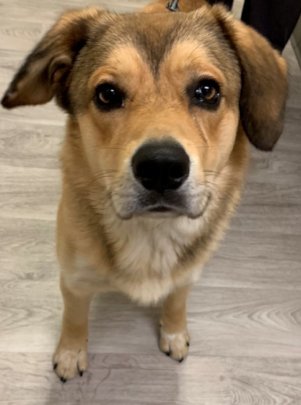 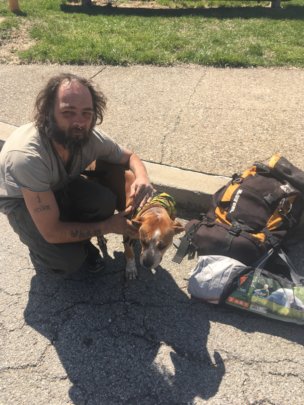 Pet owners worldwide represent every possible demographic and economic status, but share many commonalities.  They recognize the remarkable, resilient nature of the human-animal bond.  It has been well documented that pet ownership improves the lives of pet owners.  The loving comfort that a companion animal provides to their human helps to reduce loneliness, depression and anxiety as well as lowers blood pressure by petting the animal.  Homeless that we talk with will feed their pet before they feed themselves.

Eric is a homeless man in the Elizabethtown, Kentucky area. He has been homeless for the past ten years. He sets up camp in wooded areas so he is away from people. He came into town because he noticed Junk Yard Dog’s leg was swollen and it needed some kind of attention. He luckily ran into people who were more than willing to help him. He told us that they were the ones who gave him Pets of the Homeless’ phone number.

He informed us that he let Junk Yard Dog out of his sight for a few minutes so Junk Yard Dog could go to the bathroom and when he returned his leg was swollen, possibly from a cut or from a bite wound.

Eric said the people were traveling towards Lexington, Kentucky and they would give him a ride to a hospital in that area. Pets of the Homeless approved an exam at the Animal Care Clinic.

After the exam, the doctor recommended and we approved: waste fee, x-rays, antibiotics, pain medications, and medications for swelling. The hospital said Junk Yard Dog might have been bit by another dog. We spent a total of $269.89 after a small discount.

Email from the Good Samaritans:

Eric has asked me to send you pictures of him and his dog Junk Yard Dog to show their situation. We also will drive him and the dog anywhere in the area to help them out. He says he’s been camping in the woods here and been able to get donations from people to eat and feed his dog.  I want to help him get the help they need. He really loves this dog I can see that. Please help him.”

Your support has helped dogs like Junk Yard Dog.  Just since January, we have handled 269 cases in 14 States.  78 hospitals gave the treatments at a cost of over $77,000.   Another 68 cases are pending, waiting for appointments or for verification of homelessness.

Every day we get new cases.  Our three cases managers, Maia, Laura and Renee do a terrific job; saving lives of pets that belong to the homeless. 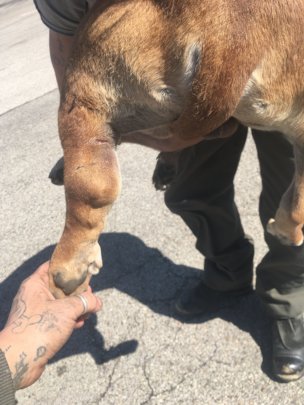 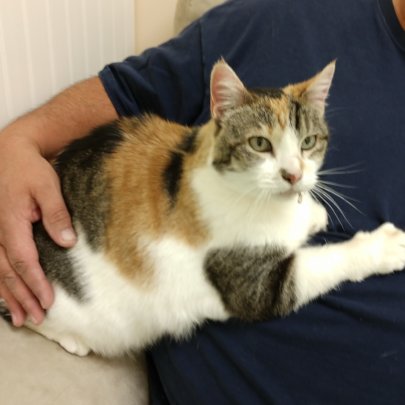 Charles is an employed homeless veteran in the Oceano, California area. Charles was referred to us by a local veterinary hospital. After interviewing Charles, Pets of the Homeless found out that he has been homeless for about two years and lives in a housing facility provided by the VA. He shares a kitchen and a bathroom. Charles called pets of the homeless asking for assistance with his 15-year-old calico cat, Muttley. He told us that Muttley needed teeth extractions. Charles said he could tell she was in a lot of pain because she was not eating or drinking. He did not want her to suffer any longer. He even opted to euthanize because he could not afford the type of treatment Muttley needed.  It was really hard for him to get the time off of work to take her to the hospital.  The hospital already had a treatment plan so all Charles had to do was drop Muttley off in the morning and he could head to work and once his shift was done he could pick up Muttley.

Feeding Pets of the Homeless spent a total of $800 on Muttley so she would not be put down.

Loretta is a homeless woman in the Van Nuys, California area. After interviewing Loretta, Pets of the Homeless found out that Loretta currently sleeps on federal land, in a field, and in a tent. Loretta has been homeless for the past 10 years. She was referred to us by her mental health advocate and a partnering veterinary hospital. Loretta called seeking assistance for her one-and-a-half-year-old lab mix, Charley Boy. When Charley and Loretta were walking a stray dog came up to him and they started to play. The stray became aggressive and started to attack Charley. She said the dog had Charley by the neck and would not let go. Finally, she got the dog off of Charley but he was bleeding from his neck.

We approved an exam and were told that the dog would need anesthesia, meds, neuter, and a laceration repair and a drain due to fluid in his neck.  (Neutering a dog can reduce aggression.  When appropriate we always approve altering a pet during an emergency case.)

Feeding Pets of the Homeless spent $600 on Charley Boy to end his suffering.

Your support has gone a long way to help cats like Muttley and dogs like Charley Boy.  I am so grateful for your gifts and hope that you will consider a recurring donation so that we can be better prepared for the future. 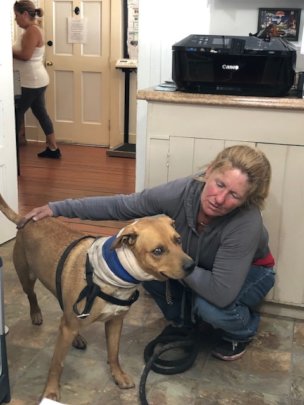 ‹ 1 ... 6 7 8 9 10 11 12 13 ... 20 ›
WARNING: Javascript is currently disabled or is not available in your browser. GlobalGiving makes extensive use of Javascript and will not function properly with Javascript disabled. Please enable Javascript and refresh this page.