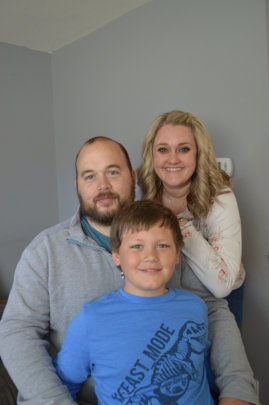 As a successful chef, husband and father, Joe makes a good living. At different times in his life, however, Joe found himself in need of help. “I wouldn’t be where I am today without the Falmouth Service Center and The Greater Boston Food Bank (GBFB),” said Joe, the 32-year-old Falmouth native. Raised by a single mother, Joe said he often went to the Falmouth Service Center—which receives 80 percent of its food from GBFB—with his mother and brother as a child. “We lived paycheck to paycheck,” Joe said. “I remember her telling me that whenever she opened the doors to the Service Center, she always felt a welcoming feeling.” Decades later, Joe was married, had a 2-year-old son and was working at a restaurant on Cape Cod when he was suddenly fired.

“I was able to scrape by with some seasonal gigs, but it’s hard on the Cape in the off-season months,” he said. Over time, it became harder for Joe to pay his bills and put food on the table. “Finally, there came a day when I couldn’t provide for my family—one of my biggest fears in life,” Joe said. “It scared me to think about my son growing up without nutritious food.” At the recommendation of a friend, Joe turned to the Falmouth Service Center for help.

“When I walked through those sliding doors at the Service Center, the overwhelming feeling of being welcomed just hit me,” Joe said. For months, Joe took home bags full of high-quality food for his family, including fresh fruits and vegetables and healthy recipes to go along with them. Because of the help he received in his time of need, Joe was able to get back on his feet and is now an executive chef at a Falmouth restaurant. “I know that not only my family, but so many others around me have been helped by The Greater Boston Food Bank,” Joe said. 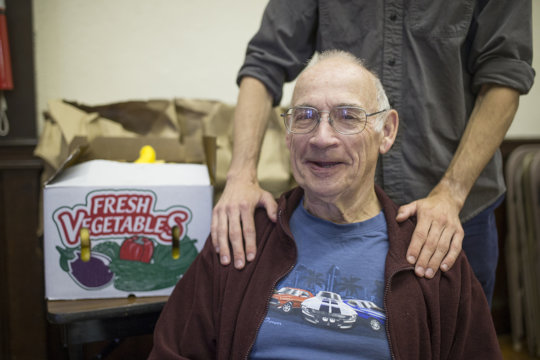 Your Donation Helps Seniors in Need

After working his entire life, Bob retired a few years ago and gets by solely on social security— which is often difficult with the cost of living in Massachusetts. Living alone and on a fixed income, Bob struggles to make ends meet.

“These times are tough. I run into quite a few people who have financial problems because their retirement income doesn’t match what their expenses are,” he said.

About three years ago while speaking to a neighbor, Bob learned about a Greater Boston Food Bank (GBFB) program at a church in his hometown of Taunton. For the last three years, Bob has been getting healthy food at GBFB’s Brown Bag distribution there. He said it makes a big difference in his life.

Bob receives healthy food from a volunteer at the Brown Bag distribution for seniors in Taunton.
“I’d essentially have to go without food if I didn’t have this,” Bob said. “I live alone, and the rent is a huge expense. If this wasn’t here, the alternative would be to go without.”
Once a month, volunteers distribute bags of nutritious food from GBFB to seniors in need at the Brown Bag. GBFB operates 15 Brown Bag sites across Eastern Massachusetts reaching 6,450 senior households every month.

According to Bob, the food at the Brown Bag usually lasts him about two weeks.
“I can make ends meet, but it’s difficult some months when you have unexpected expenses like car repairs or medicine,” he said. “It’s overwhelming at times when you don’t have the resources to fall back on.”

Bob said the best part about the market is how fresh all the food is. He said items like vegetables, chicken and grains are his favorites. “It’s not an obligation for anybody to do this,” Bob said about the people who operate the Brown Bag. “So, I’m very grateful.” 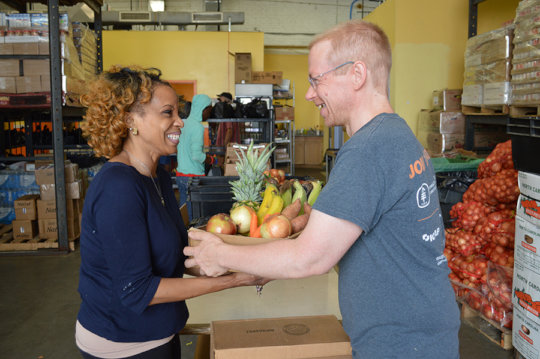 After a routine surgery two years ago, Marla, 49, from Dorchester, found herself unable to physically keep up with her job as a mental health worker. Suddenly an unemployed single mother, Marla struggled to provide for her four children.

After she lost her job, a friend introduced her to the American Red Cross Food Pantry in Dorchester. Marla said at first, she was apprehensive about going to a food pantry, something she had never done before.

“In my head I thought, ‘oh my, what if someone who knows me sees me.’ I was almost embarrassed,” Marla said. But with her friend’s help, Marla decided to go to the Red Cross Food Pantry and said it was one of the best decisions she ever made.

“The people who run the pantry make you feel loved and welcomed when you’re there,” she said. “It’s been very beneficial for me, so I can focus on other things and not worry about ‘do I have enough food to put on the plate for my children’.” Marla goes to the pantry once a month and takes home four shopping bags full of healthy food like carrots, apples, pineapples and center-of-the-plate protein items like chicken and fresh fish.

“I usually can’t get fresh fish unless I buy it, and that’s expensive,” she said. “The food generally lasts a long time and it really cuts down my supermarket bill.”

Marla recently began working as a certified nurse assistant in Milton. Because of that, she no longer qualifies for Supplemental Nutritional Assistance Program (SNAP, formerly food stamps) money. So while she has money coming in, she still has trouble making ends meet.

“Getting the extra help when I’ve needed it from the pantry has been amazing,” Marla said. “I’ve had to worry about paying the bills and keeping the lights on, but I didn’t have to worry about food.”