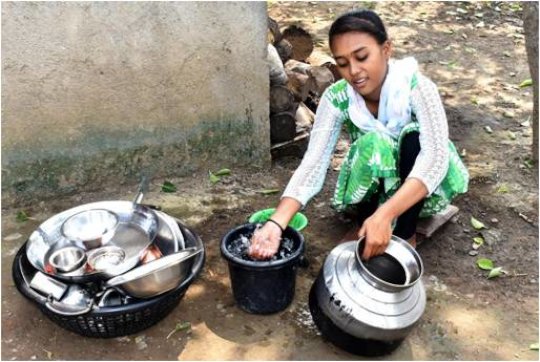 Amrapali responsible for most household chores

Amrapali (name changed) lives with her parents in a small village, Dongaon. She is the youngest of four daughters in her family.Her father has merely 6 years of schooling and her mother is illiterate. They have one acre of agricultural land. Both parents work on their agriculture field. Her three older sisters are already married. Amrapali has to do most of the household work.

Her parents arranged the marriage of her two sistersas soon as they reached 13 years of age,since her village had a school only till 7th grade. Her third sister was married off at the age of 15 years soon after she had completed 10thgrade of school. All three were child marriages.

Amrapali completed Life Skills Education conducted by Institute of Health management Pachod (IHMP),when she was 13 years old, studying in the 7thgrade,in her school. She learnt about the adverse consequences of early marriage. Her Life Skills Education teacher motivated her to continue with her education so that she can be self-reliant in future.

Amarapali says “after attending the Life Skills Education course, my communication skills have improved. Now I am able to present my point of view in front of others, negotiate and convince them. I am not intimidated by any one or anything”.

She attended the Sexual and Reproductive Health modules, which are a part of the Life Skills Education course. Recently she was sent by her school to participate in an inter-school competition on reproductive health. Girls from 7th to 10thgrade participated in the competition. Amrapali answered all the questionsrelated to the female reproductive system and menstruation, with confidenceand without a trace of embarrassment. Now, Amrapali goes from house to house educating parents about the adverse consequences of early marriage.

During the Life Skills Education classes conducted by IHMP, she shared with the other girls in her group, the problems faced by her three sisters because of early marriage and pregnancy. She convinced thegirls in her batch not to agree to get married before the age of 18 years.

Currently, Amrapali is studying in the 10thgrade,in a school located in a village that is at a distance of 9 miles from her village. Even though there is a school up to the 10th grade in her own village, Dongaon, she convinced her parents and took admission in the school in the neighbouring village as she can continue studying up to her graduation in this school.

She needs Rs. 500 per month to commute daily to the school. Since her parents cannot afford to pay for her transportation, she raises this amount by working in the fields during holidays.

She tells other adolescent girls in her village, “now girls should pursue their dreams as they are doing better than boys in each sphere”. She has convinced her parents, that she will get married only after she has completed her education. Unstoppable, Amrapali wants to be a doctor. 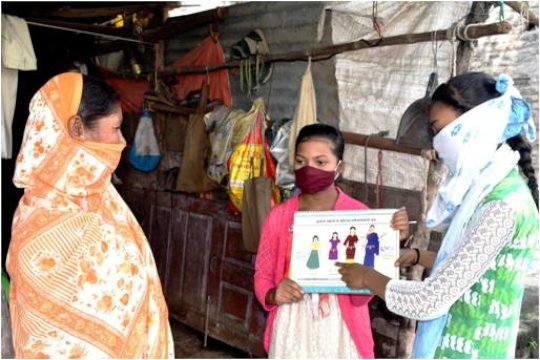 Khushi is a young married woman who comes from a large joint family of 11 individuals that live in one of the slums where IHMP provides services. She has merely 4 years of schooling. All her family members live in a small shack made of metal sheets. She and her family members make steel cooking utensils in the slum where they live.

Khushi was enrolled for Institute of Health Management Pachod (IHMP’s) adolescent care services when she was an adolescent girl.During a routine monthly house visit our community health worker (CHW) found that Khushi had missed her periods. The CHW conducted a pregnancy test immediately and found that Khushi was pregnant. Her menstrual period was on 7th August 2019.

The CHW brought Khushi to IHMP’s nurse who enrolled her for antenatal care. During a routine examination the nurse found that Khushi was anaemic. She was given iron tablets to treat her anaemia, following which her pregnancy kept progressing smoothly.

In the last week of April 2020, during her monthly household visit our CHW found that Khushi was suffering from dry cough,fever and body ache. Khushi was in the 9th month of pregnancy. The CHWtold Khushi to accompany her immediately to a nearby referral hospital where she tested positive for the Covid 19 infection. Khushi and her family were alarmed.

By then IHMP’s nurse had been told about Khushi’s predicament. She told the family to take Khushi to the largest tertiary hospital in the city where Khushi was admitted in the isolation ward.

She got admitted on 29th April at the tertiary hospital where the doctors advised a caesarean operation. On 30th April 2020 she delivered a premature baby through caesarean section. The newborn and mother were kept separately and treated for Covid 19 for a period of 14 days.

Khushi and her baby were discharged on 12th May 2020 after their treatment was over. The mother and newborn are well and safe at home.

Khushi is one of many young married women who have benefitted from IHMP’s Covid 19 relief work. The Institute has distributed 60,000 personal protection equipment to frontline workers and provided food to hundreds of migrant workers who were bereft of jobs and livelihood. 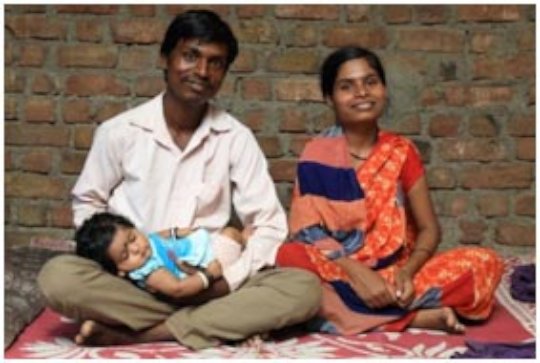 A quintessential, empowered and unstoppable girl

Sunita (name changed) is a 14 year old mother. Her parent’s home is in another district far away from where IHMP works with adolescent girls.

Her father is an alcoholic and is notorious for domestic violence. Sunita suffered from discrimination right from the time of her birth. Her mother sent Sunita to an aunt who took responsibility for her education in a nearby city. When she reached 13 years of age and was in the 8th class in school the aunt refused to continue to keep her and so the mother decided to get her married off.

Her mother received a proposal from the parents of a boy who is far less educated than Sunita, yet she married her off as quickly as possible. Within months of marriage Sunita discovered that she was pregnant.

She had no idea how a child is born and where it comes from. When she started labor pains her in-laws took her to a large hospital in a neighboring city. She saw women with their legs spread out and strapped to obstetric tables and she started crying. Following a very difficult delivery she gave birth to a baby girl.

After her delivery Sunita and her baby were provided with post-natal care by IHMP’s community health worker and nurse. She was counseled by IHMP’s workers and was invited to attend the Life skills Education classes being conducted in her village. She learnt that the sex of a child is determined by a man not by the wife.

Sunita took a pledge that she will not allow her daughter to go through what she had experienced during her childhood. She told her parents-in-law that her husband is responsible for the sex of their child. Since her husband has produced a girl child they should take care of her the way they would have taken care of a male grandchild. She also told her husband that he would have to take equal responsibility of child care along with her.

When she was interviewed by us Sunita said “I made sure that my baby girl is the centre of attention in my husband’s family. The life of my husband and in-laws revolves around my little girl. I will never allow her to be discriminated against. If I get pregnant again I would like another girl”.

Sunita also took a pledge that she will not allow any girl in her village to go through what she went through. She is conducting training in Sexual and Reproductive Health for married adolescent girls in her village. Sunita desires to study further. IHMP is supporting her to fulfill this dream.

Life skills education and counseling by our frontline workers have resulted in many quintessential, empowered and unstoppable girls like Sunita.

1 2 3 4 5 6 7 8 9 ›
WARNING: Javascript is currently disabled or is not available in your browser. GlobalGiving makes extensive use of Javascript and will not function properly with Javascript disabled. Please enable Javascript and refresh this page.