As a follow up to the previous report, this is to announce you that AGAPE has now a website Hourreehh!!! It was made possible thanks to volunteers, C2T (an eye clinic in Douala) and Vercossa (website designer). Thanks to this website you can have a better idea of how the kids, the center and the team look like. We will also be able to make our cause and work accesible from the whole world. It is a milestone for a young association like ours. Remember, we started AGAPE in only August 2013!!!

The link is http://agapecentre.org
Please, do kindly have a look at it, share the word and link with your friends and family members to continue changing lives together!!!
Warm wishes!

We hope you had a Merry Christmas! AGAPE year's is ending with better school report for all our kids. This is a great gift for the team.

We had a good time on the 22nd of december with a party at the AGAPE Center.  Some volunteers made this day special by helping with the sharing of the gifts. Thanks to donations we were able to give each child a bag including  a pair of Jeans, a top, a school activity book that we could not afford so far, a bathing soap, treats such as plantain chips, chocolates, chin-chin that they don't get to eat often and a face painting for each child! We danced and shared a meal made of Donated chicken (most of them almost never get to eat chicken), plaintain, fruit salad and salad with eggs!!! We then offered a special gift to the ones who have trully stopped wandering in the streets this year: a  two days participation to a Street ART program organized by a friend Association.

On the 24th, two of our most dedicated volunteers have given them "an afternoon in paradise" in their garden with many games, pizzas, chips, treats and a real FOOT BALL for the center!!!!

NEW!!!!! A corporate has offered to fund a dormitory for the most needed of the children. This involves transforming one of the center's room in dormitory with 2x3levels of beds and one bed for the supervisor. The beds are already being manufactured by a local carpenter.  Can you imagine? We will be able to offer a place to safe place to sleep for the most needee ones.

Check our facebook page for more update on AGAPE https://www.facebook.com/AGAPEAssociation. A website is on the way in January!!!!

You helped us change lifes in 2014. Thank you. Let's continue impacting more children lifes in 2015 together!

AGAPE Kids Went Back to School this Academic year 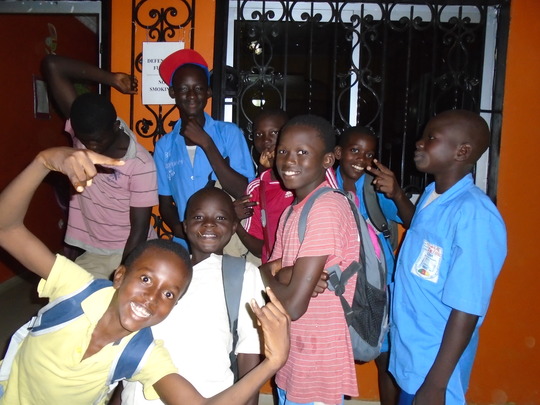 AGAPE KIDS HAPPILY BACK IN SCHOOL

We wish to express our sincere gratitude, because thanks to goodhearted individuals like you, we recently succeeded in sending 15 street and under privilegedchildren back to school this 2014 -2015 academic year. We were also able to provide them with their school and sport uniforms, books, textbooks and other school supplies. Some parents were able to contribute with the 15% school fees of their children, as we requested them, while other still have difficulties in paying that amount of money. Nevertheless, all the kids are now happily back to school and are studying like any other child of their age and grade.

Your donation is also helping us to sort out individual cases of sicknesses and cases such the two followings:

Your support made it possible for us to send Alexandre and Giovany, two young boys to school this academic year. They never had the chance to be enrolled in the educational system before due to lack of finance and the pleasure of street life. They used to beg on the streets of Douala.We were able, thanks to your support, to raise their feeding money on a daily bases.

Alexandre, 13 years old boy, the second child in a family of 6 siblings, lost his mother in 2005, at the age of 9 as a result of poison. He was later on separated from his brothers and sisters and now lives with his father who has little or no concern for him. He finally ended up as a school dropout for quite a long time. Your donation has facilitated his transition off the streets and back to school this academic year. Though it was initially difficult for Mboko Alexandre to be enrolled in school, now he is happy and he is able to go to school each day to study, just as his classmates do.

Your support has also given a chance to help Giovany to see the four corners of a classroom. He is a little boy of 10year old who can neither read nor write. He comes from a family of 4 children and lives in a building under construction with his elder brother who is 16 years old and has no money to feed or cloth himself. Giovany knows nothing about the whereabouts of his father but has a mother who has not gotten enough money to house him or fund his school fees and school furnitures. This prompted him to wonder the streets of Bonapriso Douala, begging money to fund his feeding. Begging became a normal routine for him before he became part of AGAPE kids in August 2014 and your donations have permitted him to stay far from the dangers of the streets by going to school with the aim of becoming a better person tomorrow. Giovany continued to find himself more often at the street in the beginning as he was making real money, but he is becoming more and more interested in school as days goes by and his performance are likewise encouraging. He made it in General Knowledge with a grade of 14 over 20. 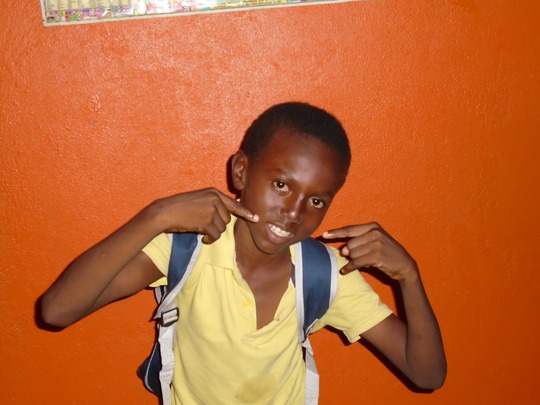 Giovanni happy coming back from school 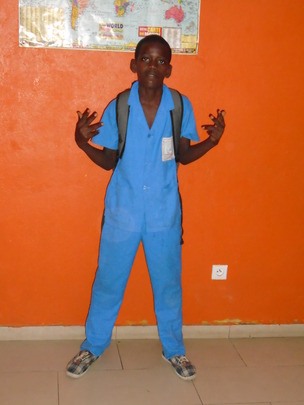 Lionel, Happy to be back at school
‹ 1 ... 7 8 9 10 11 12 13 14 15 ›
WARNING: Javascript is currently disabled or is not available in your browser. GlobalGiving makes extensive use of Javascript and will not function properly with Javascript disabled. Please enable Javascript and refresh this page.