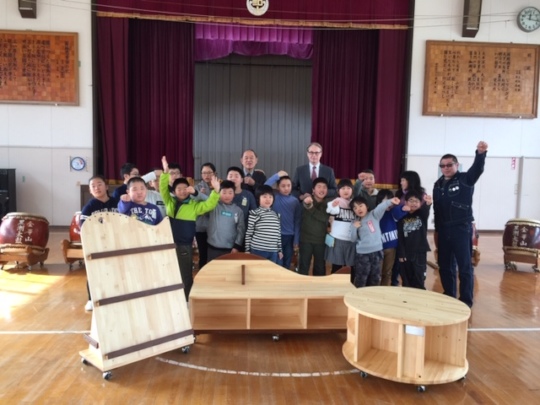 In February A whale shaped Taylor bunko made by Endo-san was presented to Ayukawa ES in Ishinomaki by Co-Chair Ichiro Fujisaki and Jason Hyland of MGM. This was the 18th Taylor Bunko built by Endo-san and each is different and designed for that school. The school was presented with book coupons to buy books of their choice. It also comes with the book by Naomi Chiba "A Gift from Taylor" which tells the story in Japanese and English to students of why the Taylor Bunkos were created.

In March a Taylor bunko made by Endo-san was presented to Oshika Junior High in Ishinomaki by TAMF Advisor Shinichi Endo. This was the 19th Taylor Bunko built by Endo-san and each is different and designed for that school. The school was presented with book coupons to buy books of their choice. The Principal, Vice-Principal and teachers are shown in the pictures with Endo-san . We are so fortunate to have Endo-san's creative ability and craftsmanship as are the schools and students!

Ayukawa elementary school and Oshika junior high school are located in Ayukawa at the tip of the Oshika peninsula. A tourist facility was established in October. In April, there will be open a whale land (Whale Museum). It is hoped that people will visit and the tourist industry will also help the Oshika peninsula to become popular and recover.

The 20th Taylor Bunko was presented to Kitakami elementary school in Ishinomaki in April where classes in the new school building have recently begun. The Kitakami area was severely damaged by the tsunami so the population has decreased. There used to be three elementary schools in this area, but two of the three were completely destroyed. The new Kitakami Elementary School took the place of the three schools. Fund advisor and bookshelf maker Endo-san tells us, "Each of the bookshelf's design is symbolic of particular characteristics in each area." As always, they were designed with the input of the school. Endo-san also presented book coupons to the school principal so they can fill the bookshelves with books!

This year’s speech contest winner was won by Risako, a ninth grader from Yamoto Middle School.   The wooden trophy was made by Endo-san.

“American tsunami victim's legacy lives on “ - An inspirational NHK World and NHK Story about Ayaka, a Taylor Scholarship graduate from the Sendai YMCA College who lives her dream after her loss of her mother in the tsunami. The story also tells of programs at Randolph-Macon College, Taylor's alma mater. There are links to video and digital story below.

TBS aired a story in Japan about one of Taylor’s students. Eriko was in 5th grade at Kezuma ES in 2011. The Anderson family visited her school in 2013 to dedicate a Taylor bunko. She remembers Taylor fondly and now studies English at Rikkyo University in Tokyo. She says many students loved learning from Taylor and she speaks English fluently. Her school "happens to " be related to Taylor's Randolph-Macon College (RMC). Those two are sister schools, which Eriko didn't know when she applied for the program to visit RMC. Eriko visited RMC in March and met Taylor’s parents and was able to share her story in English with them. Unfortunately the link has expired, but the story was also published by the Asahi Shimbun and is shown in the photo links.

Thank you for your support which helps us continue programs like these to help Ishinomaki families, schools and students affected by the disaster to continue to recover, learn and expand their horizons! Please follow us on Facebook/Tamfjp 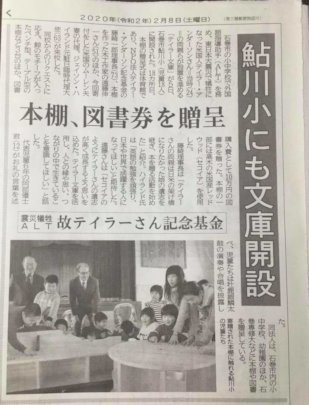 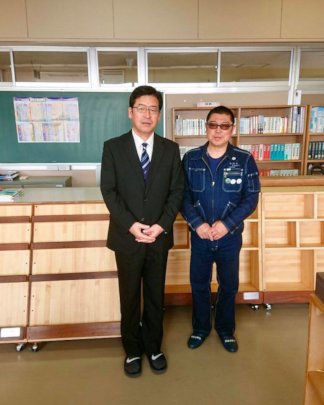 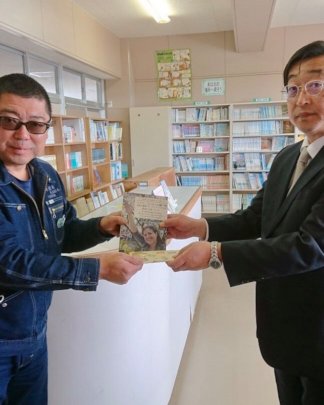 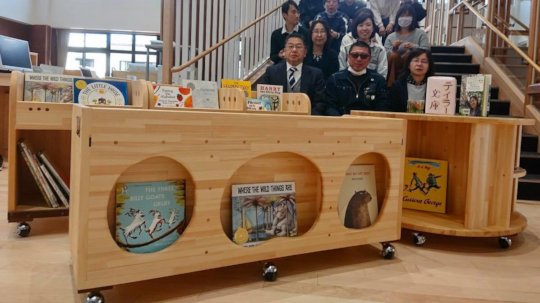 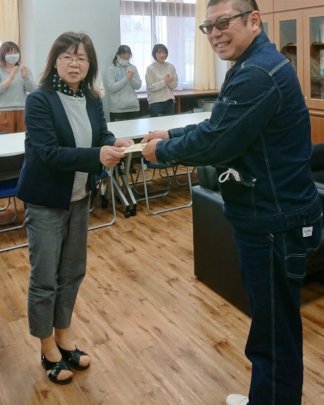 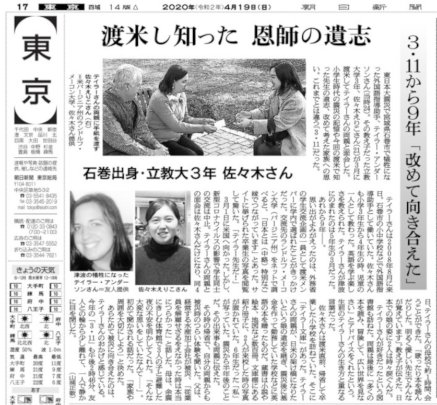 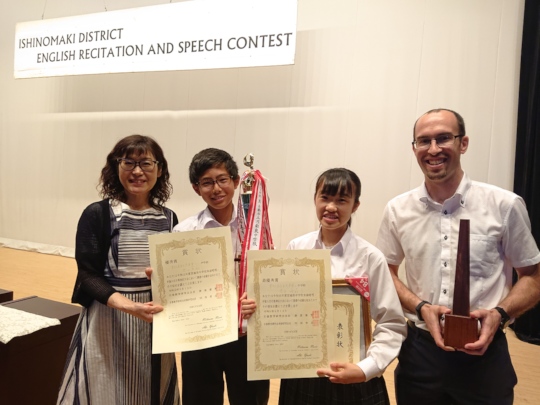 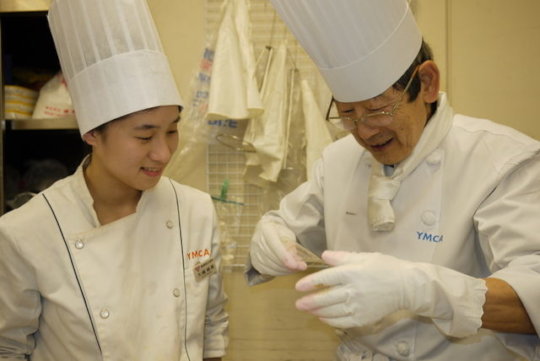 Kato-san, The President of the Sendai YMCA International Hotel and Pastry School, shares that the school year ended early because of the Coronavirus.  They still plan to hold their graduation ceremony this week.  Ayaka, who lost her mother in the tsunami and graduated in 2017, has had her story told on NHK World and NHK in Japan.

All of the students need scholarships to attend the Sendai YMCA International Hotel and Pastry School because of hardships caused by the 2011 Japan Earthquake and Tsunami.  The Sendai YMCA and TAMF provide these scholarships jointly.  Please enjoy Ayake’s story.   We thank you for watching!

Two New Taylor Bunkos and "A Gift From Taylor" 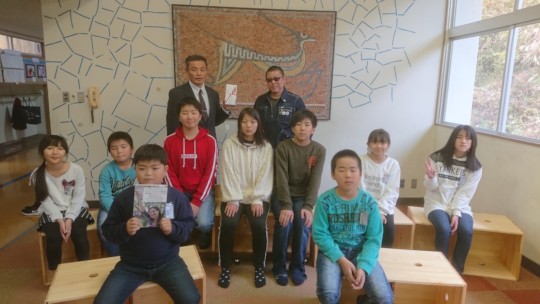 The 14th and 15th Taylor Bunkos made by Endo-san were installed at Higashihama Elementary School and Onigohama Junior High in Ishinomaki.  In addition to Endo-san being the craftsman who has made and installed all the Taylor Bunko’s, TAMF is fortunate to have him as advisor To TAMF.

We heard from the vice-principal at Higashihama ES that the bookshelves are divided into six so it can be transformed into various shapes. The atmosphere changes as the location changes.  Each school received money to buy books and Higashihama will decide which English books to buy with the advice of Chiba-san of Ishinomaki Senshu University (ISU) Library.  ISU also has a Taylor Bunko.   We received thank you letters from the students.

The Higashihama area is a fishing industry area in the center of the Oshika peninsula. Some people left Higashihama area after the Great east Japan earthquake. Now they live in Watanoha area, about 20 km away. From the Watanoha area, it takes about 30 minutes by car to arrive Higashihama. The number of people living in Oginohama and Momonoura, near Oginohama junior high school, has fallen dramatically because of the destruction of the area from the 2011 tsunami.  Currently, construction workers are working on roads, waterways, and seawalls and it is a few years away from completion to once again be a place to support a family.  If young people are interested in fishing industry, and there are working places such as fish processing plants, restaurants, and tourist facilities nearby, more people will live in the area and visit it.

Ayukawa elementary school and Oshika junior high school are located in Ayukawa at the tip of the Oshika peninsula. A tourist facility was established in October. In April, there will be open a whale land (Whale Museum). It is hoped that people will visit and the tourist industry will also help the Oshika peninsula to become popular and recover.

The vice principal of Hagashihama ES wanted people to know about Taylor’s wish and Taylor Bunko.  He set up two stores displays including the book written by Chiba-san "A Gift from Taylor".One is “Kazamidori”, which Taylor liked in Hiyoriyama, Ishinomaki. The other is coffee shop “Ishikawa”. This shop has a counter made by Endo-san.  Next to the book is a photo of Taylor Bunko at Higashihama Elementary School.

TAMF has given English books as "a gift from Taylor Bunko" to all 33 elementary schools in ishinomaki city from the last year.  Takanarita-san, Executive Director of TAMF, met with Mr. Hiroshi Kameyama, mayor of Ishinomaki, who presented a letter of appreciation to TAMF. We appreciate the willingness of the City of Ishinomaki to work with us as we continue to fulfill our mission.  We have been very fortunate to have had Takanarita-san, who arranged for the first Taylor Bunko at Mangokuura ES in September, 2011 and all since, with the help of the mayor and Endo-san, to be able to continue our support of Ishinomaki students, families and schools.

Thank you for your support which helps us continue programs like these to help Ishinomaki families, schools and students affected by the disaster to continue to recover, learn and expand their horizons!  Please follow us on Facebook/Tamfjp 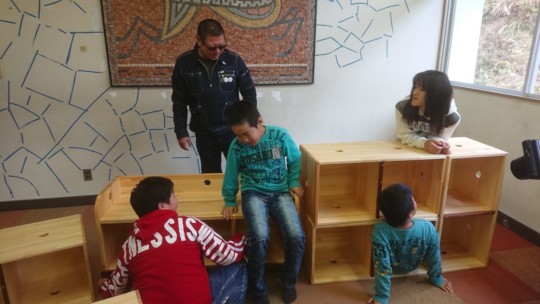 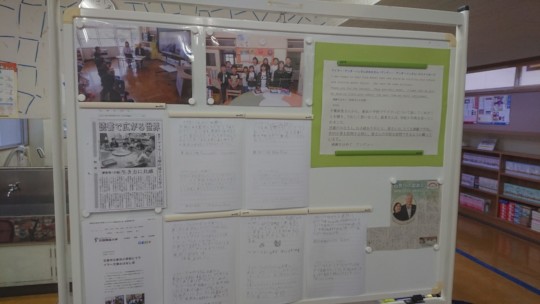 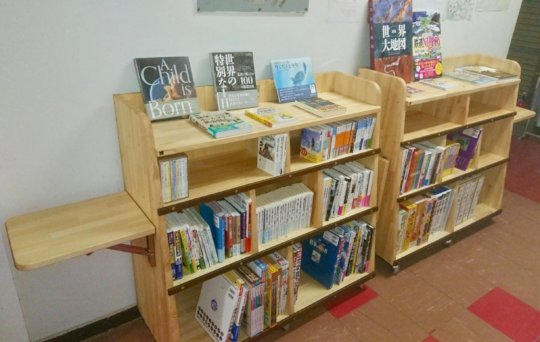 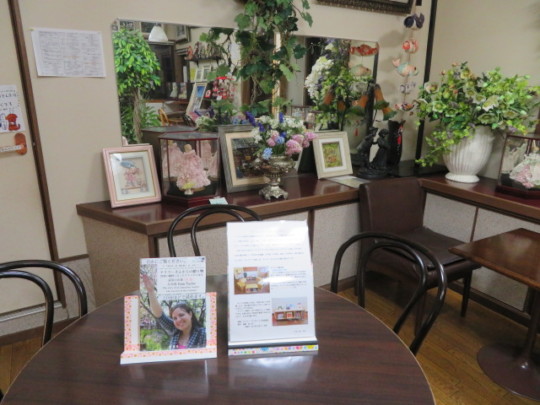 "A Gift From Taylor" Display at Kazamidori Cafe 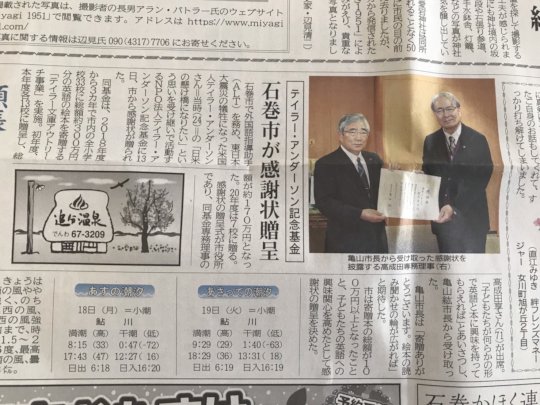