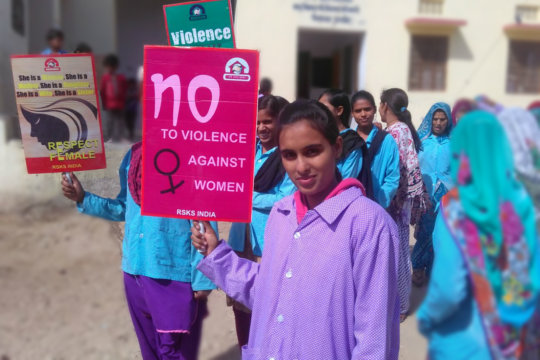 A warm Greeting from RSKS India

More than 40 complaints of violence Against women, 10 Rape cases everyday. Average 3 women killed in average 48 hours just for the sake of dowry. It is not an imaginary story, This threatening data is of Rajasthan state. It is also to be considered that the data is just official (which is based on the complaints registered per day in various police stations). There are so many women victims of violence, exploitation, atrocity, who do not come forward due to their family pressure and public Disgrace in this man-Dominated society and become anonymous.

"Stop Violence Against Women" project is a shared Effort to prevent and Protest violence Against women, Dowry death which is being practised by Rajasthan Samgrah Kalyan Sansthan with the significant Affirmative support of Global Giving Foundation and Donors.

''Under The micro project, "Stop Violence Against Women" is being campaigned in the Slums and Distant Remote villages in Ajmer district, in which 'Road shows' are being performed by "Jagrukta Rath". Workshops have been organised at several places with women & Girls for women Right, End violence, save Daughter, child marriage, Domestic violence; in which legal experts explained their legal Rights and the redress to be protected from domestic violence and signature campaign was also organised to protest violence against women. The message for Gender equality was delivered by puppet shows in many villages. All the activities performed under micro project got massive public support. Around 2100 people had advantages of the micro project Directly or indirectly as they got information of their legal rights, women Respect and regard, Developed Awareness and solidarity against "the violence against women".

Now the impact of "stop violence against women" is beginning to show Gradually, women are getting Aware of their Rights and changing their approach in this male-Dominated society. Now the society Respects women and it is expected and hoped that some regions may become violence-free in the near future. And the entire team of Rajasthan Samgrah Kalyan Sansthan is Determined to give their efforts for the same.

Set Bonus Day on Your Agenda

Don't Forget - If you are willing to continue your valuable contribution for women and Girl Empowerment, please Donate for "We believe in Girl match campaign" from 7th March to 14th March. Global Giving, U.K. will contribute for the project, 50% of the matching Bonus funds you Donate for women Empowerment. We politely Request you to Donate soon this International Women Day for Empowerment, self-employment, livelihood Development and grace of Deprived women and Girls at margins. Your share and contribution is significant for us and the link is open to support. 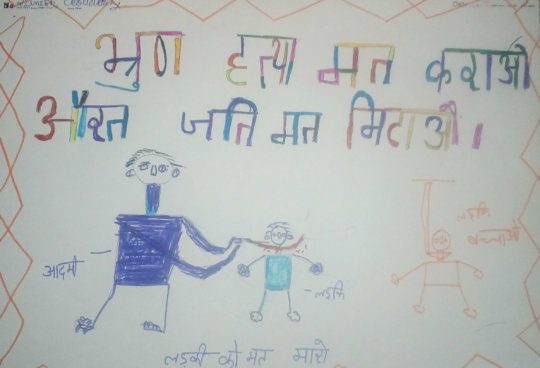 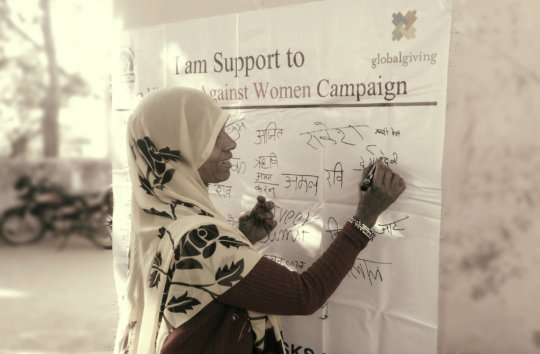 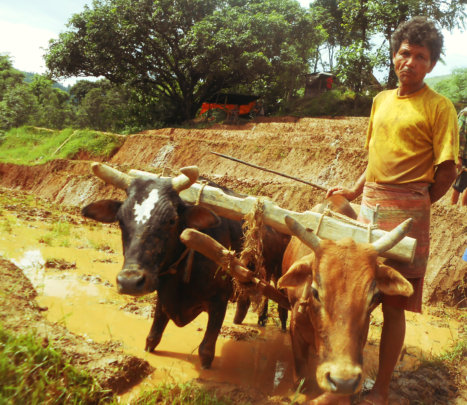 A warm Greeting from RSKS India

The project "Relief to Nepal Earthquake Victims" is being successfully operated by Rajasthan Samgrah Kalyan Sansthan with the support the Global Giving Foundation and donors. Nepal earthquake victims are being provided basic needs in daily routine through this project.

In this order, Rajasthan Samgrah Kalyan Sansthan organized a one-day relief camp at a Remote inaccessible village Jeevanpur in Dhading district to support the earthquake victims. In this relief camp 25 mosquito nets and 15 blankets were distributed to the earthquake victims by the RSKS India volunteers. Being a mountainous region, there is severe cold in Jeevanpur and the blankets will protect them from this severe cold. Similarly, mosquito nets will protect them from various mosquito-borne diseases as dengu, malaria, viral. The mosquito net has proved itself a better options for the good health of the victim families. The earthquake victims have got enthused by getting relief support. The relief camp has got enthusiasm and energy to the village and it has reduced the pain from earthquake tragedy to some extent.

The "Nepal Relief Camp" has enlighten a new way of life to the survivors of the earthquake. There is happiness everywhere in Jeevanpur village. It was a difficult task but it has become possible by the help of the donors and the credit of its success goes to them. All the villagers are obliged and thanked to Global Giving Foundation, the volunteers and Rajasthan Samgrah Kalyan Sansthan. 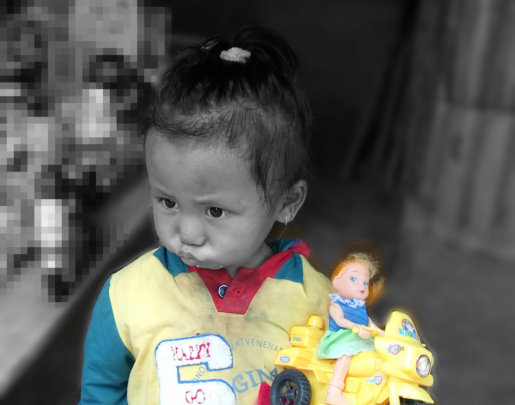 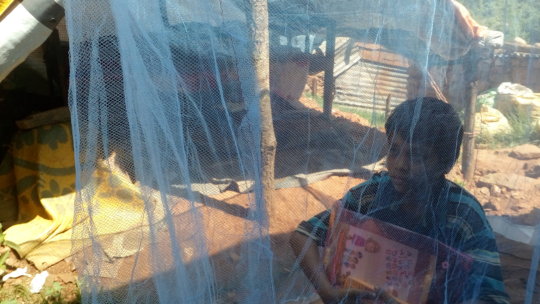 Under the project "stop Violence Against Women in india", directed with the support of Global Giving Foundation, Rajasthan Samgrah Kalyan Sansthan executed following work for awareness since November 2015.

Selfie program - Selfie program was organised under "stand with her voice" & "stand with RSKS India" and "stop violence against women". In this program, Women, Men, Children, Students, Public Representative Officers, Tourists (about 270 supporters) supported the campaign by selfie and took oath to raise voice against violence.

Postcard Program - In the support of constitution strict law against "violence against women", 4000 letters/postcards signed by school and college students, women, men, girls, officers and public representatives were sent to Indian Prime Minister, Mr. Narendra Modi. Public appealed to constitute strict law against "violence against women" with full of enthusiasm and passion in the program. We hope that Indian Prime Minister will take positive action in the matter.

The list of above All programs is attached in the report.

All the awareness programs, under the campaign, were convened by 3 coordinators, volunteers and guest subject experts appointed by the organisation.

Impact/Positive Effect/ Outcome - 9320 people were joined directly/indirectly in the support of "stop violence against women" by the awareness programs in the campaign as workshop/seminar, selfie, postcards, road show, rally, puppet show, poster competition.

• 42 women victims of domestic violence got significant help from the counselling and police support.
• Women got informed about their legal rights against domestic violence and atrocity.
• violence victim women who never complained to police because of hesitation and shyness, got a significant platform for their support and justice.
• Children were aware and Together against child marriage. Parents also got reasonable awareness information about the demerits of child marriage.
• Now, men dominated society has changed its views. In the forthcoming society, women will get respect.

In the forthcoming months, Rajasthan Samgrah Kalyan Sansthan will establish the foundation for revolutionary noble works as Women Court to prevent violence against women, violence free group, help line about which you will be informed/updated from time to time. We believe that the dream of violence free society will come true in the near future. 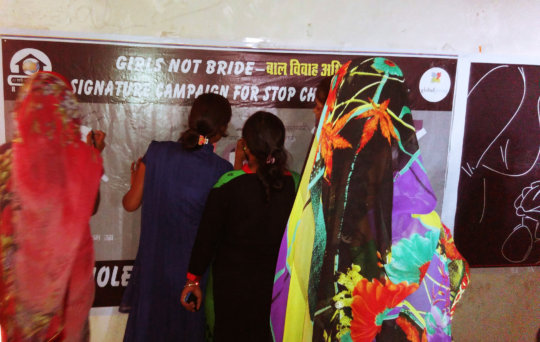 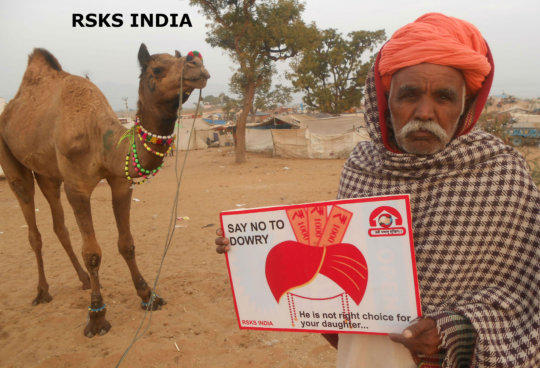 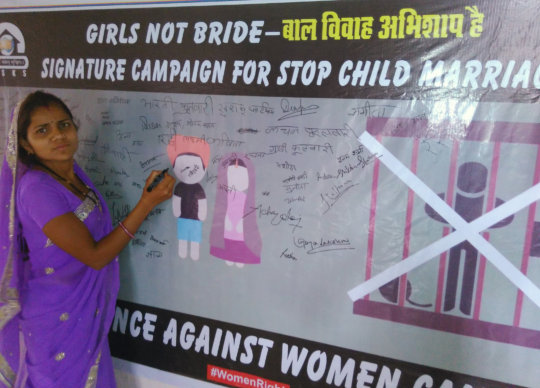 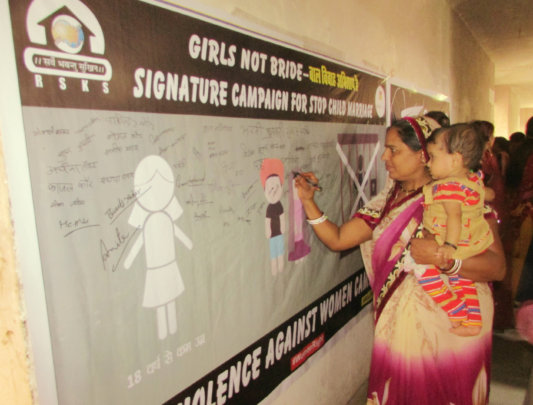