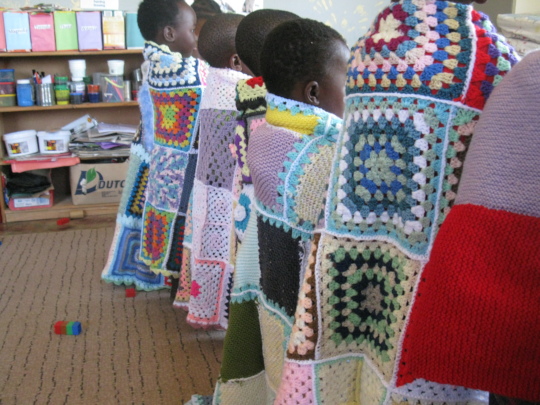 “One of the biggest challenges facing child caregivers in the Bushbuckridge region is obtaining valid identity documents for them.  It sounds like a minor issue, but it’s not.  Very often, the absence of an ID can mean that a child ends up in poverty, having to be cared for by a charity.”

Pontso Natoi is the project leader of Saw Vana, a charity based in the area and supported by the Starfish Foundation.  She and her team care for about five hundred children.  She explains the problem, “To access the government’s childcare grant of R350 per month, a child needs to have a valid ID, but there are strict rules about this.  We need the mother’s identity document and often this is not available.”

A case in point is Elvira, who came to South Africa as a refugee from Mozambique many years ago.  Swa Vana’s in-house social worker, Mary-Jane Sibuyi, explains.  “This is a very sad case.  Elvira fled Mozambique and arrived here destitute from Mozambique with her mother.  Since then she has had three children whose father has disappeared.  The eldest son is nineteen but intellectually disabled.  He goes to a special school.  The other two children, aged twelve and nine, are at a regular school.  Because Elvira is not a South African citizen, her children are unable to get ID’s, even though they were born here.  We even have clinic cards to prove their birthplace.  There is no income in the family and they rely totally on Swa Vana.  We pay for the oldest boy’s special needs education and provide the other children with school uniforms, a daily post-school meal and assistance with homework.  Swa Vana is effectively the family’s lifeline.”

We go to the family home in the remote region of Bushbuckridge, close to the Paul Kruger Gate of the Kruger National Park.  The road is wide and dusty and the simple dwelling sits on a large patch of sand behind a basic fence made out of branches and wire.  There is an outside toilet protected by a few sheets of corrugated iron.  There is no running water and residents have to walk a long way with buckets to a communal tap.  Occasionally a water tanker arrives, courtesy of the local council.

The children are at school, but Elvira and Maria are at home.  The women stand outside and speak for a while.  Their faces tell the story of a continual struggle to survive, to feed the family, to cope with the son’s disability.  There is no quality of life here, no light in their eyes.  No real hope.

Mary-Jane talks about the future.  “We won’t give up.  Swa Vana has excellent links with the Department of Social Development and we expect to eventually get the identity documents for the children and after that the child and disability grants.  That will put them onto their feet financially.  We will never stop supporting the children, but we will then be able to spend money on another needy family.”

It is a cycle that the Swa Vana women have been through many times.  “Without us, these people would be suffering even more and without Starfish, we would not be able to help them,” says Pontso.

We say goodbye to Elvira and Maria.  Their gratefulness is obvious.  It’s that gratefulness that keeps the Swa Vana people going.  That and the smiles on the faces of the dozens of children getting their daily meal back in Swa Vana’s Huntington centre. 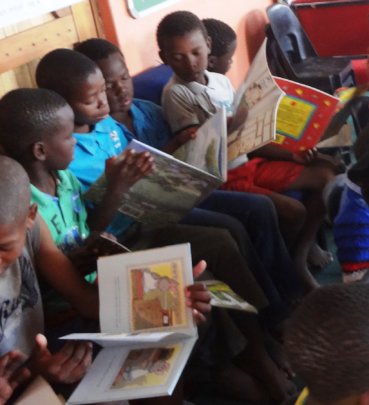 The Keiskamma Trust, based in the tiny coastal hamlet of Hamburg, south of the port of East London in South Africa’s Eastern Cape Province, started its work before the turn of the millennium when Dr. Carol Hofmeyer arrived in the town to find a holiday cottage for her husband and herself.  Appalled by the poverty and high levels of HIV/AIDS she discovered in the area, she set about starting an arts programme amongst unemployed women in the area.  The Keiskamma Trust is the result of this initiative.

The arts programme turned out to be highly successful and this prompted Carol and her co-workers to expand their influence and start focussing on the orphaned and vulnerable children in the area.

Nearly twenty years later, the Keiskamma Trust now has a series of integrated programmes aimed at uplifting the children of the area and giving them a real chance at achieving a normal life.  One of these is through education.

Nokhanyo Nkani is the education co-ordinator at Keiskamma Trust.  She explains, “Our OVC education programme in the area starts well before children go to formal school and impacts over 530 children each day.  It is well known that Early Childhood Development is a key determinant in the development of fully functional adults and the Trust has trained a group of ECD practitioners to the required national standard, which is ECD level 4.  In addition, these care-givers have been trained in diagnostic skills as well as psychological support for very young children, who are being given this essential support in three specially designed ECD centres, one each in Hamburg, Lovers Twist and Mgababa.”

The education programme extends to school-going children as well, using the same ECD facilities during term time and school holidays.   Currently, over 160 children are being cared for after school using a variety of interventions including developmental, educational and psycho-social activities as well as homework support.

The centres provide the children with more than just intellectual support.  “Poverty is a real problem in the area and many of the children are severely undernourished.  Schoolchildren are given a daily meal while pre-schoolers also receive breakfast and lunch.  In addition, the regular measuring and weighing of children enables staff to monitor the nutritional status of those attending the centres,” says Nokhanyo.

The Intlantsi Creative Development Programme has grown out of the Trust’s close association with the arts and adds teaching of drama, crafting and singing to the children at the three OVC centres.

The needs – be they health or education – of the people of the Peddie South region of the Eastern Cape are great, but slowly the Keiskamma Trust is making inroads.  Thabang is hopeful.  “Sustainability is the key.  The quicker we can partner with communities and local structures, the sooner we can expand our reach and help more people.” 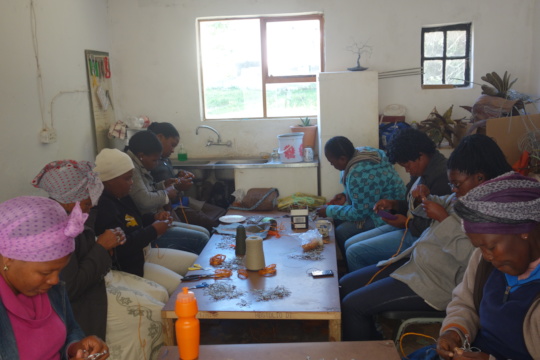 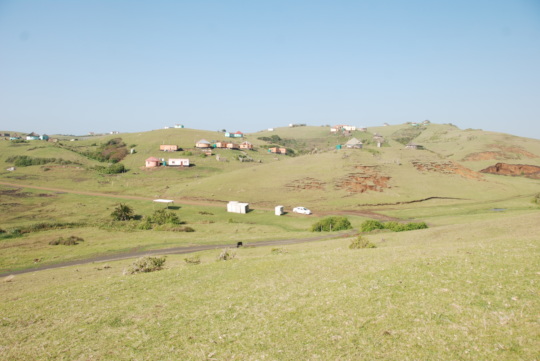 Bulungula Incubator (BI) is a rural development NGO that works in the Mbhashe Municipality, one of the most isolated and impoverished regions of South Africa.  While, on average, South Africa is considered a middle-income country, it is characterised by having extremely high levels of inequality.  The poorest areas, such as the one served by BI, are effectively on a par with the most impoverished in Africa.

In a recent study based on a range of economic measures, Mbhashe emerged as the poorest region in South Africa.

To understand the reason for this, it is necessary to consider both geography and history.

Geographically, the region lies in the deep rural Transkei on the so-called Wild Coast, a remote area adjacent to the Indian Ocean in the Eastern Cape Province.  While the rugged coastline, punctuated by numerous river mouths, wide, sandy beaches and high rocky cliffs that are pounded by giant waves, could be a thriving tourist area, the lack of road infrastructure and basic services has made access by visitors challenging.  This has meant that the communities living in the area have not had the benefits that normally accrue from tourist income.

But the main reason for the lack of development in the area has been historical neglect on a grand scale.  Under the Apartheid system, Transkei was declared a “homeland” under laws that prevailed from 1948 until 1994.  This in turn resulted in systematic under-development that left the region impoverished for decades.

“Homelands” were by design not developed in the same way that urban and other white-dominated regions were.  Road infrastructure was virtually non-existent, education largely absent or poor at best, healthcare unavailable and basic services like electricity, water and sanitation basically not provided at all by the government.

Sadly, since the advent of democracy in South Africa in 1994, little has changed.  The region still suffers from gross under-development, with healthcare, road infrastructure, education, water, sanitation and electricity remaining below what would be considered to be basically acceptable in the South African context.

The following statistics pertaining to the Mbhashe region, which is home to about 6 000 people, tell part of the story:

Rejane Woodroffe, Director and founder of BI, explains what she discovered when she first visited the area in 2005 and studied how people lived.  “A survey we did showed that 53% of households in the area had lost at least one child due to diarrheal disease, in other words to contaminated water sources.  One home had lost an incredible eight children.  There and then we decided to intervene.  Since BI was launched in 2007 we have made enormous strides.  We found that, if you start from an effective zero base, you can uplift an entire community in a generation.  We have focussed on the children, always the most vulnerable, as we discovered through those horrifying infant mortality statistics.  Now we have a slogan that says, ‘From conception to career’, meaning that we care for children from before birth right up to when they are equipped for the workplace.  Our success rate is amazing and BI is now considered a developmental model that uses partnerships to create synergies between traditional African lifestyle and culture on the one hand and external technologies and innovations on the other.  It’s a great story.”

STARFISH GREATHEARTS FOUNDATION IS A FINANCIAL SUPPORTER OF THE BULUNGULA INCUBATOR.

WE WILL BE PRESENTING MORE STORIES ABOUT THE SUCCESSES ACHIEVED BY THE BULUNGULA INCUBATOR, AND OUR ROLE IN THAT SUCCESS, IN THE WEEKS AND MONTHS TO COME.