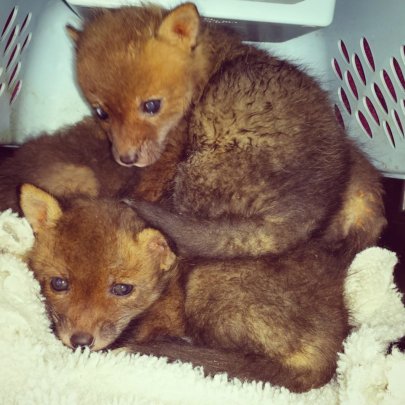 The orphaned foxes arrive at RWS.

The telephone rang at Rockfish Wildlife Sanctuary, and the caller wanted advice. He was worried about some red fox kits he had observed on his property because there was no sign of the mother. Before intervening, the caller wanted to receive guidance from someone with knowledge and experience. Thankfully he called RWS.

The RWS staffer, a licensed wildlife rehabilitator, not only gave the caller guidance and support -- she offered to lend the Sanctuary's "Havahart" traps to safely and humanely catch the kits. The caller accepted and together they made a plan for the rescue.

The kits were in rough shape when they arrived at the Sanctuary. Some of their siblings had already perished, and the four were dehydrated and malnourished. The kits were given electrolytes, then gradually moved on to fox formula (a formula specifically made for foxes).  At about 5 weeks they were introduced to solid food, which includes puppy food, fruits, veggies, nuts, mice and venison.

Before long the kits were eating on their own and began to grow. At that point they left the nursery and moved outdoors to the fox enclosure. The enclosure is in a wooded setting so that the changing sounds and smells of the forest become familiar to the growing kits.

When orphaned foxes are raised at the Sanctuary, they become long-stay patients because they are not able to be released until they are at least six months old. During this time are provided with bones and toys, hollowed out logs and bales of hay to keep them entertained during their stay.

The day of the young foxes' release was an exciting and gratifying one for the RWS staff and volunteers. The animals were released on a 500 acre property bordering the George Washington National Forest. A happy ending, brought about by an alert property owner, some skillful wildlife rehabilitators, and a community of supporters who make our work possible. Thank you! 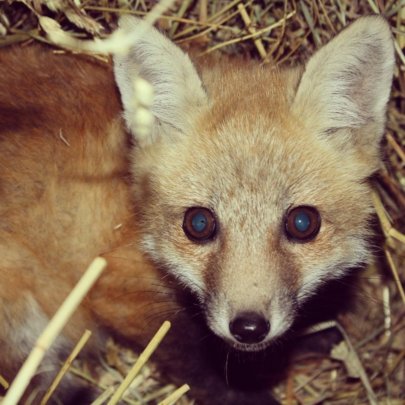 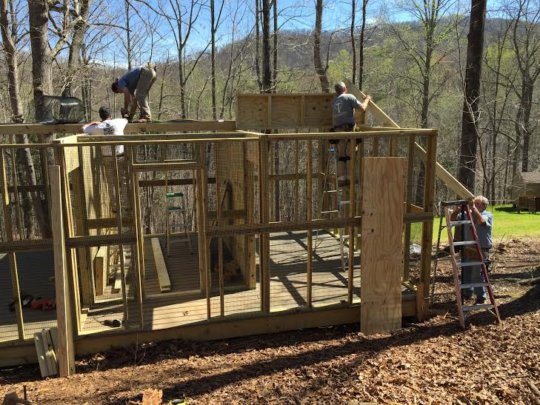 2015 was an eventful year for Rockfish Wildlife Sanctuary. Thanks to the support of many in the local community, as well as Global Giving donors, the new RWS Sanctuary building was completed in rural Nelson County, VA. It is all we dreamed of, and more. The animals are loving their new, more spacious enclosures, and the staff and volunteers are delighting in having a facility created for rehabilitation.

Additional enclosures will be created in 2016 to allow for care and rehabilitation of additional species of wildlife. The photo above shows volunteers from the Building Goodness Foundation working on the aviary, the largest of our new enclosures.

As we begin the New Year, we are remembering some of the special animals of 2015:

After being hit by a car, a 7.5 lb. yellow-bellied slider (a type of land and freshwater turtle) was successfully rehabilitated and released. This was very exciting for the RWS rehabilitators and volunteers, who had never seen a slider so large. Yellow-bellied sliders have been known to live 30 years or more in Virginia, and we are thankful that this turtle's life was not ended prematurely.

It was another good year with Wood Ducks which are normally very hard to rehabilitate. RWS released a group of 21 in August, and had another group of 6 that were released later. Adult Wood Ducks have beautiful markings and colors, yet can be hard to spot in the wild. They are cavity-nesters that prefer to live in wooded swamps and freshwater marshes.

RWS cared for eight orphaned red fox kits this year -- a record for us. All were successfully released. Foxes are onmivores. Their diet in the wild includes berries, plants, insects and small mammals. Foxes help to control the population of rodents by preying on rats and mice.

On June 20, a newborn squirrel arrived at the Sanctuary weighing only 18 gm.-- the weight of seven pennies! A staff member volunteered to take it home for the nighttime feedings that were required to give it a chance at survival. By August, the baby squirrel weighed 40 gm., and has since grown large enough to be released. Eastern Gray Squirrels can live any place with large deciduous trees -- from forests to backyards. They use tree cavities, or make nests of leaves, up high, in the crotch of tree limbs.

With thanks for your support in 2015 and best wishes for a wonderful New Year from your friends at Rockfish Wildlife Sanctuary! 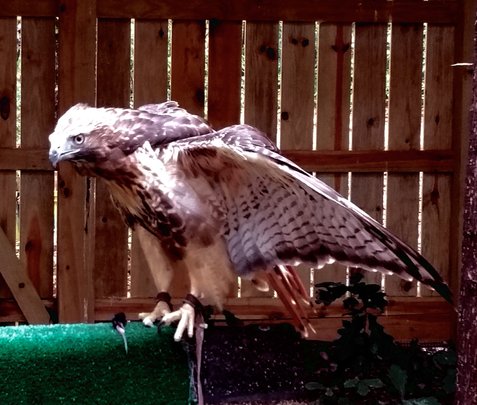 Jack, a one-eyed hawk, is now an education animal.

Rockfish Wildlife Sanctuary is known for rescuing, rehabilitating, and releasing orphaned and injured native Virginia wildlife. In addition to this primary mission, RWS serves to educate the public about the needs of wildlife.

One way this is done is by providing care for “education” animals. These are non-releasable animals unable to fend for themselves in the wild. The role of the RWS education animals is very important. They are taken to public events, and are viewed during tours of the Sanctuary, to help RWS educate about the conservation and care of native species. On the other hand, animals that are expected to be released will have very limited human contact by staff only.

Jack, a Red-tailed hawk, has joined this special group of education animals. Jack is missing one eye due to an unknown injury as a fledgling. Because of his limited vision, Jack is unable to hunt, and would starve if left on his own. Instead of this unpleasant fate, Jack lives at RWS in a large outdoor enclosure which was especially built for him. Jack’s diet is mostly mice – many mice! Training “on glove” is part of Jack’s daily routine. Under the laws of the Migratory Bird Treaty Act, and because hawks are a Federally protected species, Rockfish Wildlife Sanctuary was required to receive education permits from the U.S. Fish and Wildlife Service and the Virginia Department of Game and Inland Fisheries to care for Jack. In addition, RWS staff has completed special training and certification to qualify to have a resident raptor.

Caring for Jack requires a big commitment from Rockfish Wildlife Sanctuary – both of staff time and financial resources. RWS budgets $60 per week for mice and to provide the specialized training required to keep Jack happy and healthy. We think he’s worth it!