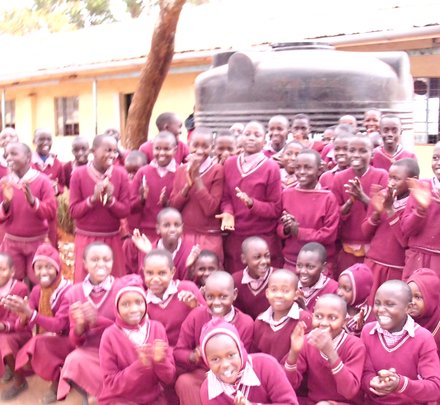 A 10,000 liters water tank has finally been installed in Mutulani primary school compound for roof catchment water harvesting. This has been a long journey since the onset of this project towards the end of year 2013. A recommendation was made to have the tank installed at the primary school by the community through MAWE Community Based Organization (CBO). Every household in Mutulani sub location is represented by a child in the school hence every community member will benefit from the water collected in the tank as reported by MAWE Chairman.

Madam Mwania, the deputy head teacher of Mutulani primary reported that they will from that time be getting safe water for drinking by the children and teachers while at school. Madam Kimuyu also explained that this is the largest tank in this area! The school had only a 2,300 liters water Tank but now they have almost five times more water capacity with the new tank installation.

Yvonne now in class 7 reports that their dream has been turned into a reality and that she appreciates all the efforts of PEN and the donors of Global Giving because the tank will reduce absenteeism by students due to water related diseases and cases of child labor that the students have been subjected to through drawing water for use in school. “We will also have more time to read and improve our performance to become better people in future” Mbithi a class three boy in the school reported.

The community contributed unskilled labor, supervision through MAWE CBO, locally available materials which include water for construction of the tank base, ballast, bricks and sand. The community also contributed a bag of cement towards completion of the base when the quantity that was quoted could not finish the entire work. This was a clear indication that sustainability of the project is guaranteed.

The school management and the community through the Head teacher Mr. Nzomo and the MAWE chairman Mr. Mutungi committed to be monitoring the project’s progress and appreciated the efforts and the support the school had received. 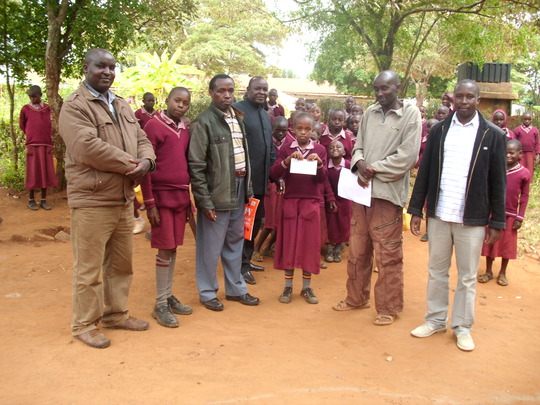 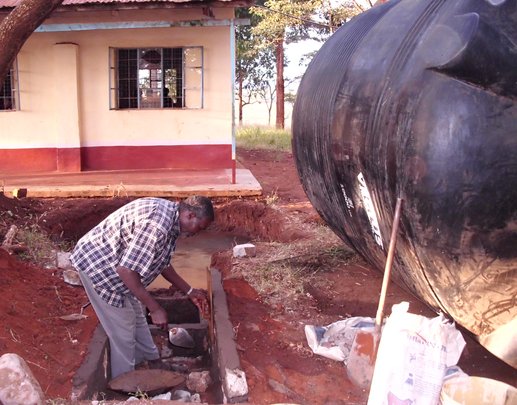 Construction of the base for water tank 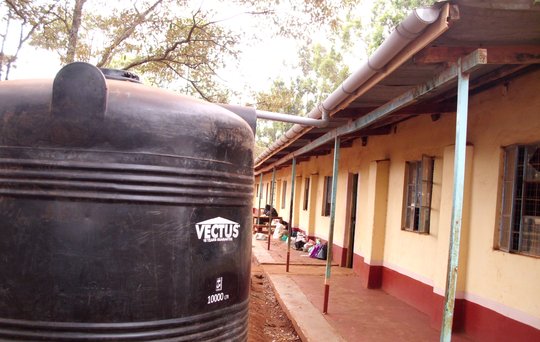 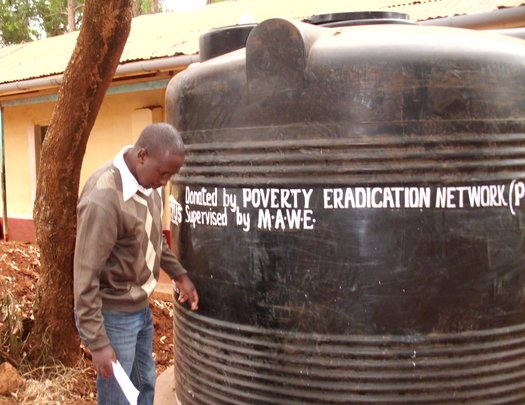 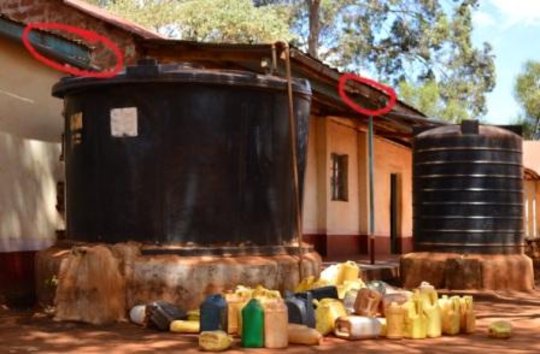 MUTULANI PRIMARY THE FIRST BENEFICIARY OF THE PROJECT

The people of Mutulani have been preparing and finalizing logistics of receiving a water tank to harvest roof catchment water to be used for drinking by the children and teachers while in school. The community and the school fraternity met and agreed that, with the resources available through global giving account they can install a water tank in Mutulani primary school that carries a representative from every household within the area. The primary school has over 400 children and the significance of the project would be felt by the entire community through their children.

The school currently has two other water tanks which empty up very fast once filled. The gutter system is also damaged and hence not able to carry enough water to the tanks. The addition of one large 10,000 liters water tank will greatly increase the amount of water the school can harvest from the rains especially this being the heavy rain season in Kenya.

The community has mobilized the locally available materials to be used in the installation work which include bricks and ballast to be used in constructing a base for the water tank; they have also identified a local supplier of the hardware materials plus the water tank by collecting three quotations from three different suppliers and discussing on different terms and conditions. During the installation work the community members have agreed to provide the unskilled labor and water to be used for construction. The project will also renovate the damaged water gutter system to allow for efficient rain harvesting.

Both the community and the school fraternity can’t wait to see the tank serving them. During an interview with the Mutulani primary school head teacher Mr. Caleb Nzomo, he expressed great appreciation for the entire community seeing the need to give children the first priority to access clean and safe drinking water. He reported “I welcome this idea and project in our primary school and assure MAWE group (the local group coordinating the project on the ground) and the community at large that their children will complete a month without ferrying drinking water from home with gallons. For almost a month our children will have peace of mind and this will have a positive impact to their academic improvement”

Yvonne a student at the same school also reported with excitement that “I am very happy and thank the initiators and sponsors of this project. We the children of Mutulani primary will save the time that was to be used in fetching water to class work. I also believe that water borne diseases cases will go down because this water will be safe for human consumption compared with the current water that we get from the earth dam near the school. Drawing water from a common point will ensure safety measures will be taken to guarantee water safety to the students. We are very happy and wait eagerly for the project to be installed in our school”

We shall keep you updated on the progress of installation of the new water tank. Thanks to all who have helped bring smiles to the children and community of Mutulani village. 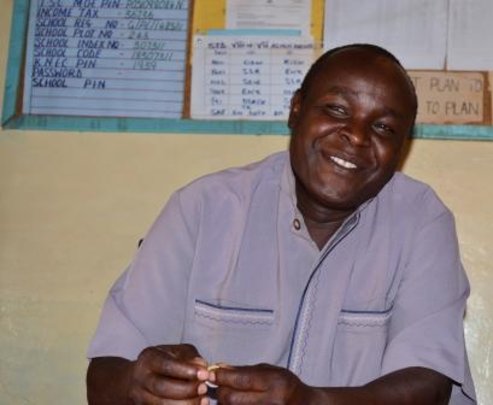 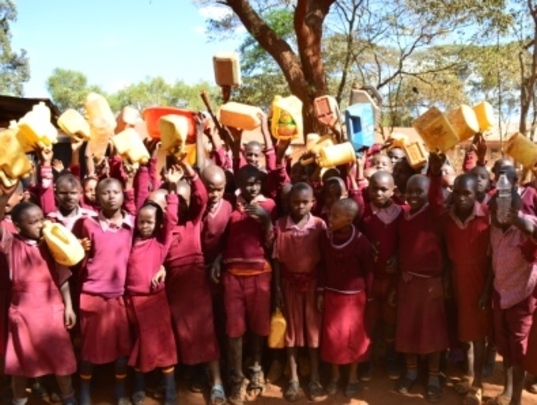 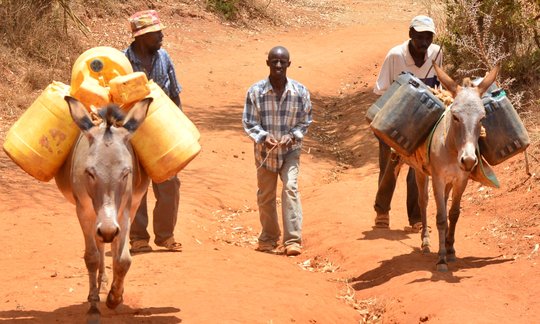 Poverty Eradication Network (PEN) would like to thank all who participated in the Mutulani Water project fundraising campaign November 25 to December 31, 2013. Your support enabled PEN to gain a permanent spot on the Global Giving website where we will continue raising fund for the Mutulani water project as well as post new projects for worthy causes in our community. Your contributions will help the women and children of Mutulani get one step closer to accessing clean, safe water at their door step.

Since the amount raised is not close to the budgeted amount of USD $ 35,294. PEN will be mobilizing the local community to engage with well-wishers to raise more funds and also initiate other campaigns to raise the full budget.

Rainfall in Makueni County ranges from 150mm to 650 mm per annum typical of ASALs in Kenya[1]. Mutulani villagers have indicated that the water situation has been bad since the beginning of draught in mid December 2013 to date as they have been walking long distances to get to the nearest water source. The region did not get much rain, leading to the water pans/ sources drying up and so far, the food crops on their farms have dried due to lack of rainfall and a major population in the area is faced by food crisis.

Discussions with women of Mutulani Village brought to the fore the need for water tanks installed nearer their homes so they do not have to walk far to get enough water for their families without the back aches they experience from repeated trips to water points. The water in the tanks can also be treated to prevent contamination from source and any water borne diseases.

Yvonne a girl from Mutulani Primary school is hoping to get a borehole dug near the school so the children do not have to waste time fetching and carrying water tot school also that they have access to clean and safe water to drink hence remain hydrated and healthy free from water borne diseases.

The principals of both the Primary and Secondary school in Mutulani expressed their concern at the lack of water in school and neighborhood. They have to buy water from vendors; the secondary school principal had this to say; ‘Purchasing water for school use is expensive and takes ¾ of the annual budget, we use about 50 Jerry cans of (20 liters) water per day which cost over ksh. 10,000 ($116)’

The future plans for Women and Children of Mutulani is to invest in water harvesting techniques in their homesteads so as to access water at shorter distances and practice irrigation agriculture to secure the food situation. The community is hoping that the funds raised will also be used to educate them on water harvesting and treatment technologies so as to uplift their living standards.

PEN will also be looking to link the community project with the County Government and other agencies that handle Water, Sanitation and Hygiene matters so that the Mutulani community has the required support infrastructure to sustain the project.

Thank you again to all who donated to this cause and we shall continue to keep you updated on the progress. 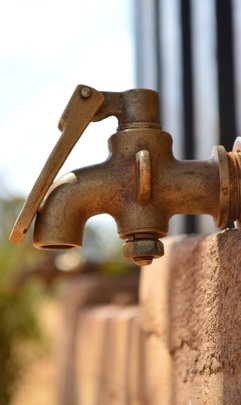 Empty water tank at the school
‹ 1 ... 4 5 6 7 8 9 10 11 12
WARNING: Javascript is currently disabled or is not available in your browser. GlobalGiving makes extensive use of Javascript and will not function properly with Javascript disabled. Please enable Javascript and refresh this page.