Towards miracles, away from meandering 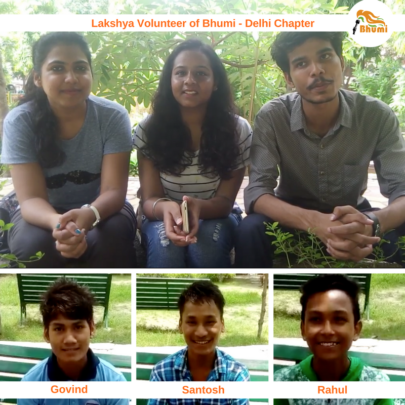 Volunteers at Bhumi have been earnestly working to cultivate the lower social stratum into a garden of knowledge, confidence and self-sustenance. In this regard, one significant programme of Bhumi among many is mentoring children in shelter homes. ‘Lakshya’ (meaning target), aims to provide life skills and guide children in understanding their strengths and in defining an identity for themselves.

Govind, Rahul and Santosh resided in a home run by Bhartiya Adimjati Sewak Sangh in Delhi where Bhumi started Lakshya in 2016. The home provides shelter for children from remote villages and economically backward families and supports their education till class 10.

With time, Bhumi volunteers observed that some of the children were lagging behind in their academics and had no ambitions for their futures. Having gone through more than what children ought to, these children were ‘ignorant and unrefined’ - the challenges were evident to the volunteers. Even though the original structure of Lakshya had only weekend classes, Himanshu (one of the volunteers), started teaching these children everyday. He assisted them in school subjects and provided thoughtful guidance for setting goals. The determination and enthusiasm of one volunteer became contagious, attracting more volunteers of Lakshya to support the classes.

The volunteers had several well-thought out discussions with the children to understand their plans for the future. They gave personalised attention on possible career options based on their interests. During which, they identified three children who wanted to opt for Diploma degrees in engineering after class 10. The children had to endure many hurdles to achieve this. Firstly, their academic performance had to improve; with daily coaching assistance, this gradually got better. Secondly, the home permitted stay of children only till class 10 exams, after which they are on their own. Govind, Rahul and Santosh feared that they would be stranded once again. Bhumi volunteers approached the home and convinced them, with great efforts, to allow the children to stay until their admissions. Finally, and most importantly, the children had to clear the entrance exam, which they did with satisfactory scores.

“It is a proud moment for all of us. It feels great that these children are proceeding towards a better future and that we (volunteers) have contributed towards it,” says Ms. Lakhbir, content with the Lakshya team’s accomplishment.

“… I am very happy that I got admission in a government college. The volunteers helped a lot … I convey my profound thanks to them. I am very happy,” Santosh smiles with happiness.

Many volunteers played key roles in this journey, few of whom are Himanshu, Lakhbir Kaur, Urvashi, Narender, Ronil, Mikki and Sneh. Though they are employed, they took turns and ensured that one or the other was available for the children’s daily coaching till admissions. Govind, Rahul and Santosh have gotten into reputed Polytechnic colleges in Delhi and are all set to start their journey towards a better tomorrow.

Ms. Urvashi is delighted and shares, “Teaching these kids have not only lead to their betterment, but also helped us in gaining confidence. It was by the team’s collective effort and determination that we were able to overcome the obstacles.”

The journey has motivated other children in the shelter home to focus their energy on education and to dream big. They are now in a streamlined path and tend to meander much less. Govind, Rahul and Santosh have left a miraculous mark that influences others to dream and achieve. 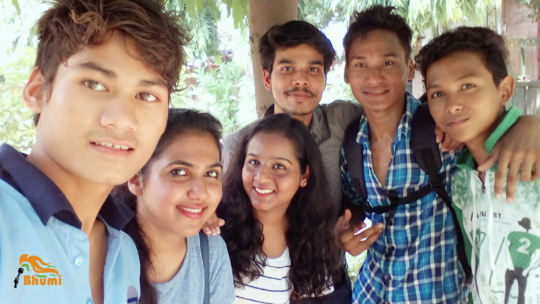 Bhumi Volunteers with children, after admission 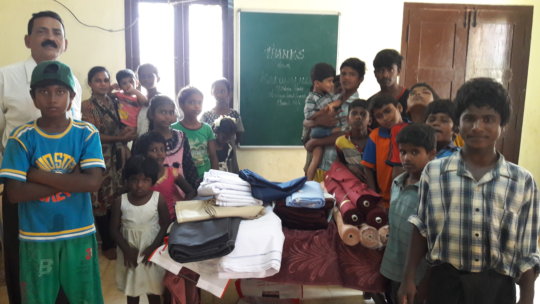 Karunai Illam, a shelter home (an orphanage) in Madambakkam, Chennai, is occupied by more than 100 children and few warm caretakers. The home was surrounded by unhygienic and unsafe conditions until recently.

An open ground adjacent to the home has been a place for local residents to dump garbage. The area housing boys had no surrounding compound wall, making it open to this garbage filled ground - thus, breeding deadly diseases. Furthermore, the home is located in a low-lying area and the boys’ rooms, facing an upward slope, is often flooded during rains.

As the first step to fight the home’s malady, the home's management sought Bhumi's support for the construction of a compound wall on the side facing the upward slope. The home had walls on two others sides already and the adjacent buildings on the fourth side formed the boundary for it. The dumping grounds have also been cleared to some extent. Bhumi also identified the need for school uniform cloth materials, and ensured these were also distributed to the children.

The children no more have to experience the sight of filth in the pleasant mornings. The management will no more remain in fear of playful children running out of sight and getting hurt or even worse getting lost. The wall is constructed to resist flooding in case of heavy rains owing to its location. A sense of security and safety is laid with each brick of the compound wall. 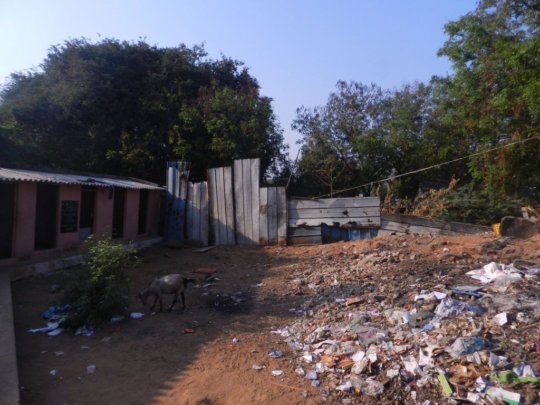 Unsafe sheets to make up for boundary 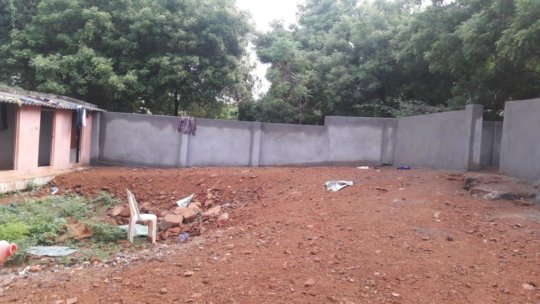 Robotic art by a girl from a shelter home 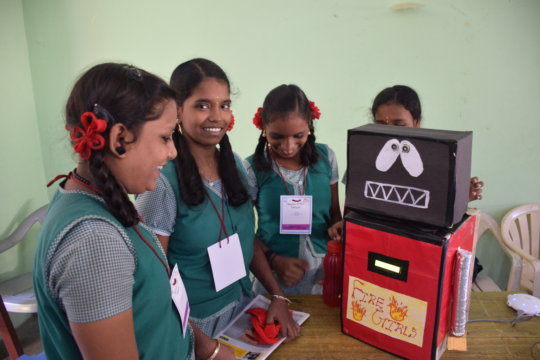 The team posing with their robot

Nivetha, from Chennai Shelter Home, is one bright girl who smartly utilised an opportunity presented to her through Bhumi’s Robotics programme. The programme involves practical robotics training for children from classes VII to X, in which the children are divided into teams and asked to suggest an idea to build a simple robot.

Nivetha, along with her team of two other girls, came up with an idea of ‘Vanakam Robot’, a simple automated robot for greeting people (‘Vanakam’ in Tamil means ‘welcome’). The team successfully built a working model and displayed it at Bhumi’s Ignite Fest, where her team also received colossal opportunities for further avenues. Before discovering the procession of success and happiness that Nivetha and her team got pulled into, let us swiftly wade through her life and experience in Bhumi Ignite’s Robotics programme, Yantra.

A structured curriculum has been developed by an expert panel of Bhumi and Belgium-based NGO Dwengo, which has an equal mixture of theory and application. Nivetha's adequate knowledge helped her pick up the concepts of electronics from the Robotics sessions quickly. Her interest level throughout the academic term was impressive. She always tried to answer questions. After coming up with the concept of building a robot that welcomes people, her team worked on it for several weeks and came up with a perfect model using a micro-controller, an ultrasonic sensor, a servomotor, and a digital display.

The team covered the skeleton of the robot with colourful attire made from waste cardboard. Nivetha understood the technology, made a practical application of the knowledge, and smartly put some art into it. One can only admire such ingenuity – simple yet beautiful.

At Bhumi’s Robo-Fest, various teams demonstrated their robots and competed with teams from other schools. Nivetha knew not only technology and art, but also some marketing. She placed the ‘Vanakam Robot’ at the entrance to greet visitors, catching the attention of everyone entering the show. Their robot got significant media coverage too. Many special guests and regional celebrities, like actor Mime Gopi and RJs Senthil and Vijay from Radio Mirchi (Chennai), visited the exhibition. The guests’ recognition and admiration left Nivetha jumping in joy.

Bhumi volunteers encouraged and assisted the team in exhibiting the robot at an expo conducted in MIT, Chennai. Nivetha’s interest, efforts, and skills impressed many dignitaries at the expo. She and her team participated in MIT’s Carte Blanche’s Industrial Robot expo, receiving training from various reputed organisations.

Nivetha now looks forward to the future eagerly, and is keen to learn more. Her bond with the volunteers was evident when she requested them to come every day to teach her more concepts. Bhumi thanks the volunteers for their willful strenuous effort to nurture prodigies like Nivetha. 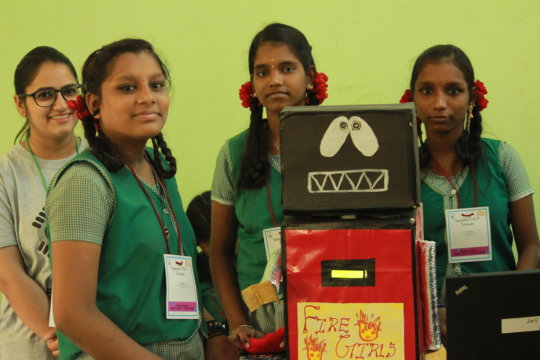 The Hello-Robot team
‹ 1 ... 6 7 8 9 10 11 12 13 ... 16 ›
WARNING: Javascript is currently disabled or is not available in your browser. GlobalGiving makes extensive use of Javascript and will not function properly with Javascript disabled. Please enable Javascript and refresh this page.