We will not be Silent (Protect the Protest update) 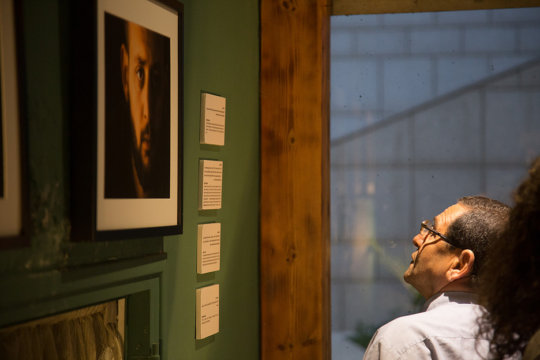 To date from the launch of the campaign in December 2015, we raised US$ 6,230 from individual donors and US$10,000 from an institutional donor to protect the right of Palestinians to protest against institutionalized discrimination and the Occupation, and to mobilize for freedom and justice. Thanks to all of the individual donors for their generosity, particularly those who made recurring (monthly) commitments!

As you know, we are representing Anas K., the 19-year old Palestinian citizen of Israel, in a criminal case against him for his status updates on Facebook. Anas was arrested and then placed under house arrest for his Facebook posts that allegedly constituted “incitement to violence and terrorism”. However, we’re pleased to inform you that Anas received good news last month!

On 17 April 2016, following a motion filed by  Adalah to the court, Anas’ house arrest was partially lifted so that it will only apply at night-time. This change of conditions will allow him to work and to continue to take music lessons to play the buzuq, the long-necked string instrument.

Anas wanted to share the following message with you for enabling this small, but very meaningful victory: “It’s a beautiful feeling to live life in freedom. Now I can exercise my rights, to both express and to move without restriction. Finally! All the same, I still await complete freedom”.

3. An update on Shaymaa and Sujood, detained for protesting

In October 2015, we represented (with other volunteer lawyers whose presence we coordinated in court) the young female teenagers, Shaymaa and Sujood from Nazareth, who were arrested following their participation in a demonstration against violence. Shaymaa and Sujood were both placed under house arrest following their detention, and criminal charges were filed against them. While the criminal cases are still ongoing, the good news is that they are no longer under house arrest. While the teenagers are currently being represented by private lawyers, they remain active with Adalah in speaking out to help other young people who are detained for exercising their right to voice their dissent to injustice.

Adalah, together with Baladna – Association for Arab Youth and 7amleh, started a new project at the end of 2015 that expands the #ProtecttheProtest campaign. Given the traction Adalah created with #ProtecttheProtest and the urgency to protect the right to free expression including freedom of assembly, freedom of association and the right to protest, our additional joint initiatives with Baladna and 7amleh include:

#WeWillNotBeSilent is a strong follow-up to our #ProtecttheProtest campaign and will run throughout 2016 and 2017.

Accordingly, you can expect in your PtP updates information on how we are using a combination of training and outreach, legal representation, media advocacy and capacity-building in this new stage of expandedwork with human rights lawyers, youth and journalists to protect the protest and free expression.

Check out our online portal displaying the personal stories of those whom the Israeli authorities have attempted to silence, but with little success:

Can you spot Sujood, Shaymaa and Anas?

Mohammad Badarneh, Visual Director of #WeWillNotBeSilent, explains his vision for the campaign, “We look for the moments rooted in our memories, without underestimating the strength and defiance of those who stand against Israeli oppression, nor underestimating their human frailty”. 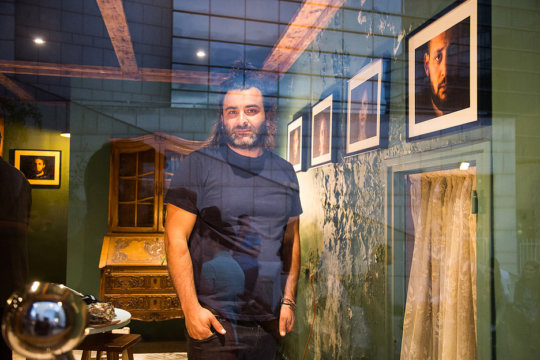 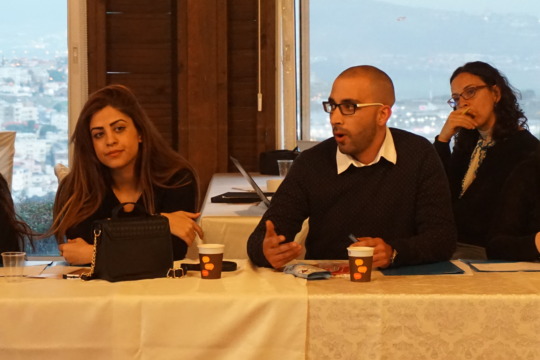 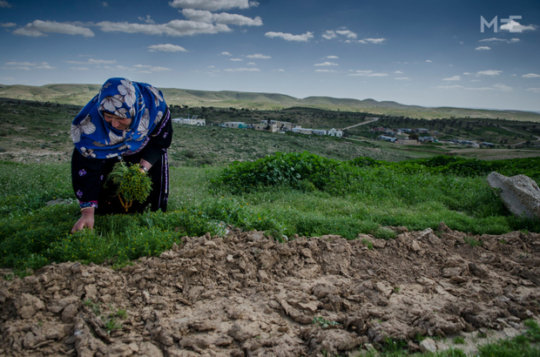 Spring is here, meaning we approach our long struggle for Atir-Umm al-Hiran with renewed vigour. Here is our latest update on the sister villages, to which you generously donated to ensure that their residents remain on their lands and in their homes.

1. On the legal front: The Israeli Supreme Court refused to reconsider its decision to demolish Atir-Umm al-Hiran and evict all its residents

On 17 January 2016, the Israeli Supreme Court (SCT) issued its final decision in the case of Atir-Umm al-Hiran. The Court rejected Adalah's extraordinary motion for a second hearing on the case, which requested that the Court reconsider its decision to approve the state's plan to evict the village's 1,000 Arab Bedouin residents, who are citizens of Israel, in order to build the Jewish town of “Hiran” and expand the “Yatir Forest” over its ruins. The Court's refusal to reconsider its 5 May 2015 ruling effectively means that the eviction and demolition procedures against the village can proceed.

The President of the Supreme Court, Justice Miriam Naor, wrote in the decision: "It is indeed, as noted by the decision on the request, that the case is a matter of public importance and sensitivity. However, this is not enough to order the hearing of the case for the fourth round [after the Magistrates', District and Supreme Court decisions]. This case is not one that can be considered to be exceptionally-exceptional, the rarest of rare, to warrant another hearing."

In Adalah’s view, the Supreme Court’s assessment of the case as not sufficiently exceptional to warrant a second hearing is both absurd and dangerous. The Court’s refusal to reconsider its prior ruling instead reflects its compliance with the state’s policies of discrimination, segregation and dispossession against the Bedouin.

While the Supreme Court permitted the demolition of Atir–Umm al-Hiran and the eviction of its residents, in another case involving a Israeli Jewish family (“The Seltzers”) home in Jerusalem, the Court prevented the state from evicting the residents because it claimed their case was a "unique" one. Does the Supreme Court really believe that Jewish homes in Israel are special but Arab homes are not?

2. Showing Solidarity on ‘Land Day’ with the residents of Umm al-Hiran

On March 30, 2016, Adalah staff participated in the 40th annual Land Day commemoration in Umm al-Hiran. Land Day is an annual commemoration for Palestinians of the events on 30 March 1976.  On that day, Palestinian citizens of Israel participated in a general strike and marches throughout the country to protest against the Israeli government’s plan to expropriate tens of thousands of dunams of land from Palestinians. During confrontations with police, six unarmed Palestinian citizens of Israel were killed and hundreds were wounded.

The commemoration events started at 9:30 am with olive tree planting in the Naqab villages of al-Za’roura, Umm Mitnan, Abu Tlul and al-Atrash. Then a large group gathered in Umm al-Hiran at 4:00 pm for the official speeches and commemoration.

a. Jenny Nyman, a designer with whom Adalah regularly works, composed this fantastic photo-essay on Atir-Umm al-Hiran. Read it/view it on Middle East Eye.

b. Amjad Iraqi, our Projects and International Advocacy Coordinator, penned this piece comparing the tragic story of Atir-Umm al-Hiran to the similarly situated unrecognized Arab villages of Ramiya and Dahmash. The piece was published in +972 Magazine and can be read here.

We mentioned above (Point 1) the Supreme Court’s double standard on living spaces for Arabs and Jews by highlighting the example of the Seltzers and Atir-Umm al-Hiran. Scroll down to see (a snippet of) the infographic we created to help you visualize the case.

Thanks again for your kind support and for making all of our efforts possible over the last months.  Adalah and the people of Atir-Umm al-Hiran will continue to need such support to help us do our crucial work.

In solidarity and hope, 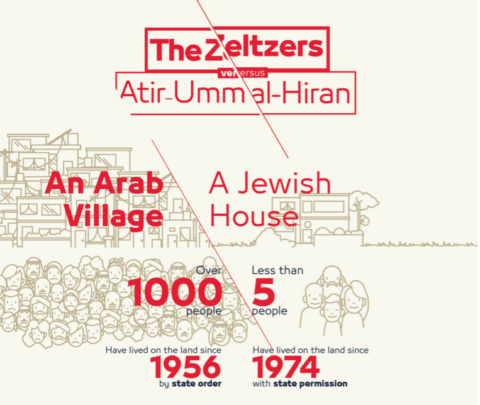 Your donation matters: a #ProtecttheProtest Update 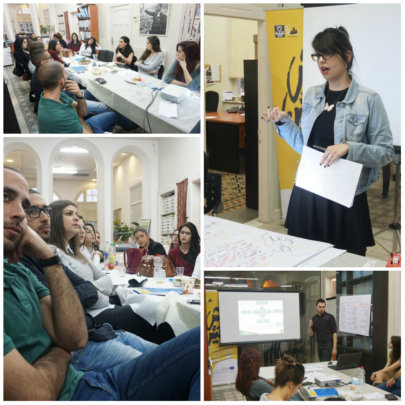 Freedom of Expression Training for Lawyers - 19/2

Greetings to you from Adalah. We are writing to let you know how your kind donation is making a real difference in the ability of Palestinian citizens of Israel to protest to defend and promote their rights. At the height of the protests from late September 2015, we represented 30 individuals, many of them minors, who were detained for participating in and/or organizing demonstrations. We also worked with volunteer lawyers throughout the country to make sure that everyone who needed legal representation at police stations and in courts got it.

Here’s a short update on how we’re working to fight against illegal police actions and to expand the space for Palestinian citizens of Israel to demonstrate for their rights:

1. We shared with you the stories of the young detainees, Shaymaa and Sujood (on youtube), who were arrested together in early October 2015. We filed official complaints to ‘Mahash’ (the Police Investigation Unit) on their behalf against the police for their violent treatment of the girls. In total, Adalah filed four complaints to ‘Mahash’, including for two brothers, Mohammad (minor) and Obaida who similarly were beaten by the police.

2. We also submitted a comprehensive letter to the Israeli Attorney General demanding the opening of an investigation in to the serious violations of the human rights of Palestinian citizens on account of numerous illegal police practices. These practices included the illegal dispersion of demonstrations,  arbitrary detentions and arrests of activists and in some cases, their fathers, restrictive conditions to prevent demonstrations, and several violations of the rights of children who were arrested (e.g., night arrests, questioning them outside of the presence of their parents, among other violations of the Youth Law).

3. We’re representing Anas (19-years old) in a criminal case against him for his status updates on Facebook. He was charged with the inflammatory offense of “inciting to terrorism” for posting “Jerusalem is Arab” and “Long Live the Intifada”, among other political expressions. Notably, several Israeli political leaders, who have made far worse statements and whose words influence large constituencies, have escaped indictment. A positive development that we’ve noted is the wide extent to which social media users are discussing Anas’ case. Many young activists have approached us to learn more about their rights in online fora, including on Facebook.

4. We’ve also initiated legal work on a number of related issues such as trying to compel the Israeli police to publish the new ‘open-fire’ regulations, the potentially unconstitutional mandatory minimum punishments of those convicted of stone-throwing, including the penalization of their parents through the imposition of fines.

Your kind donation makes all of our work over the past three months possible. To show our appreciation, we’ve made a short video for you! 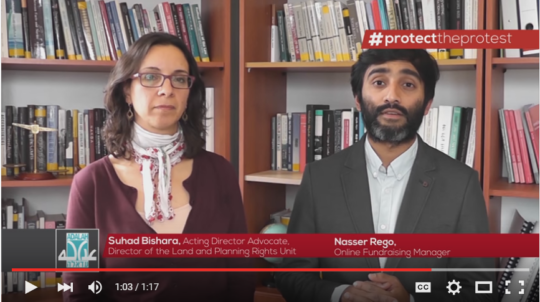 A video from us to you to show our appreciation!