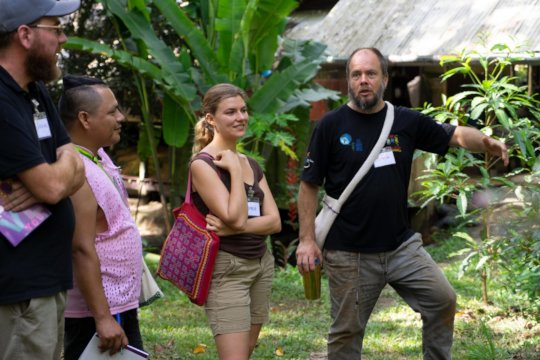 Tierra Martinez, the Captain of the ship

We just held our first ever Permaculture Design Course (PDC) at our permaculture center. A beautiful multicultural group of indigenous Shipibo herbalists, local farmers from neighbouring communities, indigenous students from the Achuar and Awajun peoples, Chaikuni staff and friends from the Temple of the Way of Light came together for 10 inspiring days to learn the basics of permaculture and share their own knowledge. The course was masterfully guided by Tierra Martinez and Beatriz Ramirez from the Na’Lu’um Permaculture Institute, both of them bringing a world of knowledge from a life dedicated to permaculture to the Chaikuni Institute and the participants, running their 194th (!) PDC.

From regenerative agro-forestry systems to sustainable Ayahuasca cultivation. From Mandala gardens to wastewater treating banana circles. From observing nature to the fundamental ethical permaculture principles. From dreaming and defining your dream, to design it. The PDC planted a large variety of seeds; literally, but also metaphorically within each of the participants. For us at the Chaikuni Institute, it represents the starting point to increased outreach work in the surrounding communities to our Permaculture site.

With the funds generated from this campaign, we will now follow up with the local participants of the PDC and offer them technical support to apply the newly gained knowledge on their own land, with a focus on "chacras integrales" (regenerative agro-forestry systems) and the cultivation of medicinal plants within that system. In this way, we hope that other local farmers will gain interest in what their neighbour does and that it will generate a domino effect having local farmers changing to more regenerative agro-forestry practices while at the same time reducing deforestation. With time and increased funds, we will be able to assist more local families.

Or shall we say, YOU did it! With your generous support to our project during the Climate Fund Campaign in April, we were chosen as one of the 6 winning projects to be included in GlobalGiving´s Climate Action Fund. This means we shall receive monthly donations to our project from the Climate Action Fund over the course of the next year. This will help us to step up our work and intensify our efforts in the nearby villages. We will keep you posted about our progress as we continue to run this campaign for the full funding goal. Any donation will help us to take our project a step further.

Thank you so much for your support to local communities in the Peruvian Amazon and for being part of our movement to regenerate the Amazon. 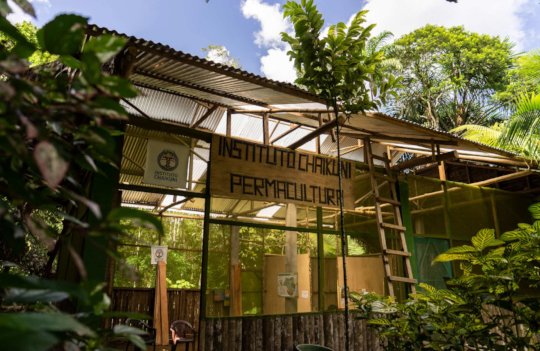 This is the Permaculture Program base 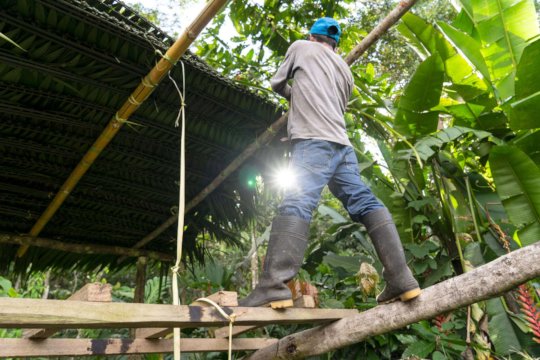 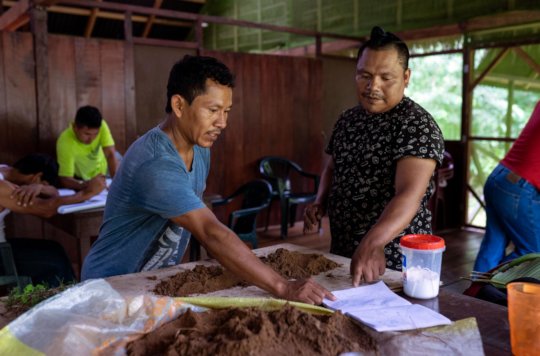 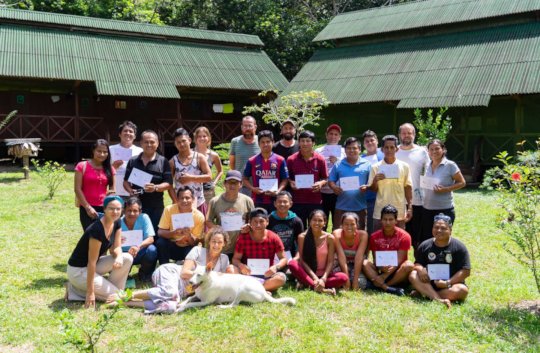 The participants, an intercultural group
May 17, 2019

Continuing the Uphill Battle to Build a Permanent Student Center

By Stefan Kistler - Director of the Chaikuni Institute 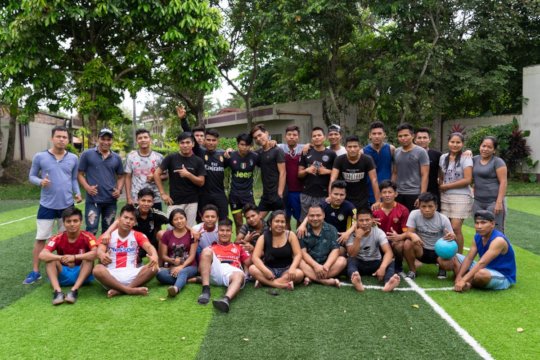 Students posing in the new and improved residence

Today, we thought we´d seize the opportunity to briefly tell you a bit about the difficult political context we are working in and the challenges the students and our Institute face trying to build a permanent student center for the indigenous students here in Iquitos.

A short re-cap: In late 2017, the students achieved a (seemingly) historic victory as the Regional Government signed an agreement to lease a piece of land to them for 10 years (renewable) where the future student residence shall be built. In 2018, the government approved a project to build temporary housing on the land, announcing the start of the construction several times throughout the year. Yet, when the 4-year term of the government came to a close in the end of 2018, not one single brick had been laid out. The exception: In mid-2018, with your help, we at the Chaikuni Institute went ahead and built a computer room and office space for the students.

A few months after the new government had taken over office, and the students re-opened negotiations for the building of the student housing, the government announced that they would nullify their agreement over the lease of the land. They proclaimed that the agreement had legal procedural errors, and that the land was zoned for other purposes. In short, the future residency cannot be built on the piece of land granted to them in 2017.

Once this shock was somehow digested, instead of giving up, the students and Chaikuni armed a new advocacy campaign towards the regional government, teaming up with more allies such as the local arm of the Ministry of Culture. The attitude of the Regional Government so far has been collaborative; a series of meetings to identify a new alternative piece of land for the students has given some preliminary results. At the same time, a committee is being established that will together draw up a public project and plans for the student residency. In the meantime, the students have once again been moved to another temporary hostel; but this time to a residency with much improved living conditions.

Of course, our Intercultural Education program has also been doing many other activities. We continued our workshops on bee-keeping with stingless bees, organizing two visits to our permaculture center. For the upcoming documentary, we accompanied some students in their lectures at the University and visited Leonarda, a young and energetic Tikuna woman studying in Iquitos, in her native community Cuchillococha, situated further down on the Amazon river, close to the boarder with Brazil and Columbia.

In early May, we had the pleasure to receive Viktorija, field traveler for South America from GlobalGiving, here in Iquitos. We organized a full day visit to our permaculture center, where the indigenous students and our staff organized a so called minga (=communal work). It is very common in the Loreto region that village members gather regularly to do communal work; building a school, clearing a communal field, improving a road or a path, etc. The female students had prepared masato for the event; a traditional drink made out of (usually fermented) cassava, widely used among indigenous peoples in the Peruvian Amazon. The day was shared between setting up ecological gardens, drinking masato and sharing experiences.

We'll keep you updated with the latest news as we continue to run our campaign for the full funding goal, and for the student residency to become a reality. Any donation will help to keep us going.

We thank you for everything you continue to do to support indigenous youth in the Peruvian Amazon. 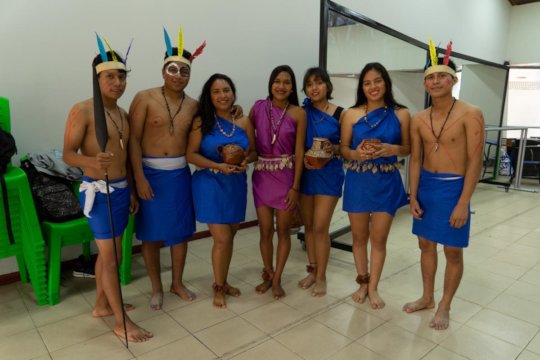 Visiting the students at the University (UPO) 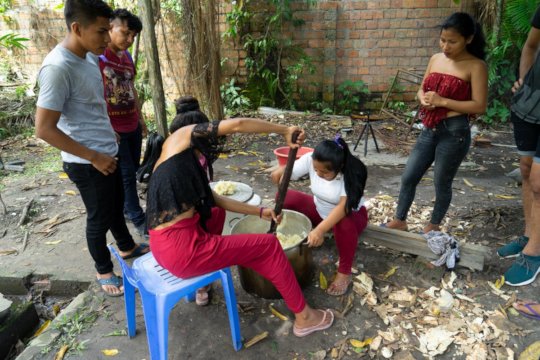 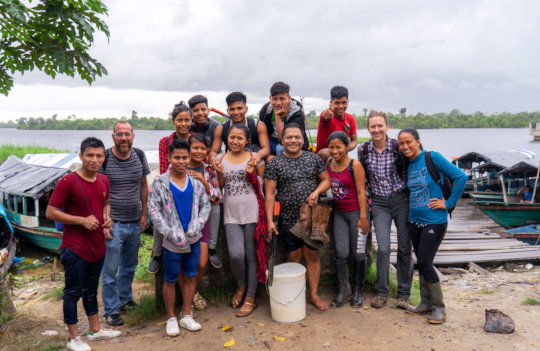 Welcoming Viktorija-Global Giving during her visit 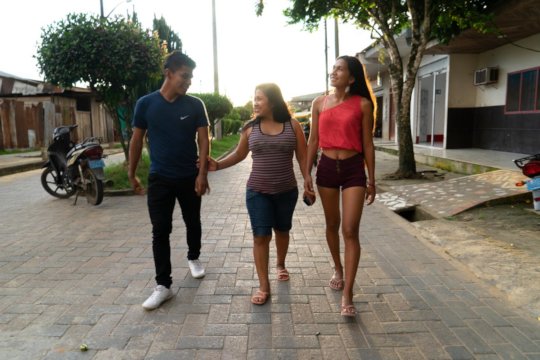 Reciprocity to regenerate the Amazon 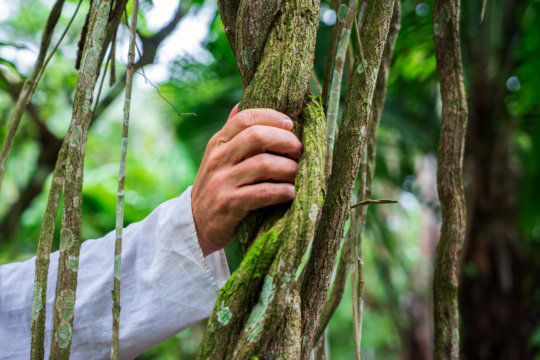 A sample of the baanis caapi (ayahuasca vine).

Since we have launched this campaign, besides promoting it, we have been busy organizing our first Permaculture Design Course (PDC). It is unique in that it will be held primarily for local farmers, besides local staff of both the Chaikuni Institute and The Temple of the Way of Light, all of which are and will directly be involved in working with local communities to promote and implement regenerative agro-forestry systems, including the cultivation of the Ayahuasca vine and other medicinal plants.

But we don't just want to hold a PDC; we aspire to organize a world-class PDC. For this reason, we have been in touch with several of the most renown and experienced permaculture professionals from Latin America. We are extremely excited to let you know that we have reached an agreement with Tierra Martinez from the Na’Lu’um Permaculture Institute. Tierra has over fifteen years of experience in teaching PDC's. His Na´Lu’um Permaculture Institute in Argentina will be holding the next International Permaculture Convergence in 2020, an epic permaculture event happening only every two to three years.

Meanwhile, our permaculture staff has been busy with further developing our one-hectare demonstration plot of a chacra integral. Chacra integral -translated as an integral agricultural field- is a local concept, describing a permaculture like method based on successional poly-cropping and forest management techniques. Instead of slashing-and-burning the forest, forest plots are selectively cleared. Valuable species are thus preserved, while others are cleared to make space for desirable crops or for nurturing the existing plants. Cut vegetation is left on the ground, mimicking the natural cycles of the rainforest ecosystem. Species that can coexist on mutually beneficial terms are planted next to each other. A wide, diverse variety of staple crops are planted together with fruit and timber trees, as well as medicinal plants.

Most exciting, something historical happened in February: Between 2011 and 2018, we planted over 1.800 Ayahuasca vines on the land of the Temple of the Way of Light, some of which have now grown enough to be harvested. Under the lead of Shipibo maestro Segundo, the first ever harvest of the vines and the subsequent preparation of the sacred medicine took place at our site. We harvested 100 kilos of Ayahuasca and 35 kilos of Chacruna leaves (the other ingredient to prepare the medicine). Had it all been sold on the market, it would have reached a price of roughly 700 USD, which would mean a substantial additional income for any rural Amazonian family.

We are convinced that our approach of promoting healthy and regenerative agro-forestry practices and chacra integrales holds the key to:

Although our campaign so far hasn't raised the amount we had hoped for in order to organize our first key activity, the PDC, we are determined to go ahead with its organization and make it a reality. Any donation still makes a difference and will help to carry this project further.

We thank you for your reciprocity; your support to local communities in the Peruvian Amazon.

With gratitude and love from the Amazon, 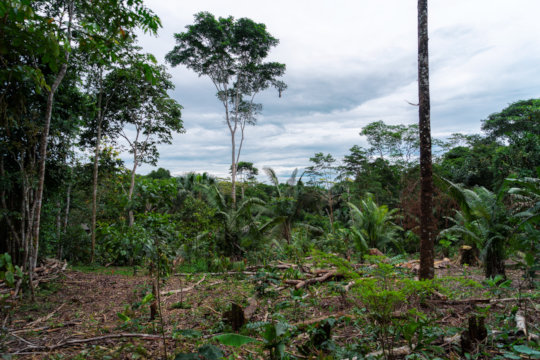 Demonstration plot of a "chacra integral" 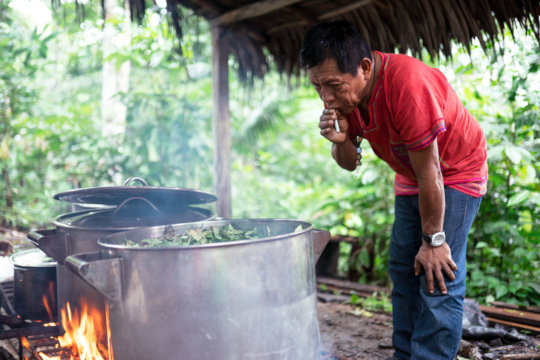 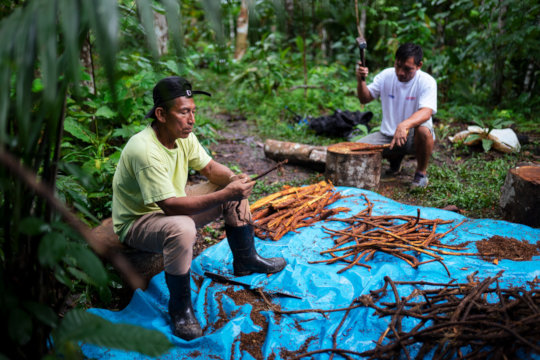 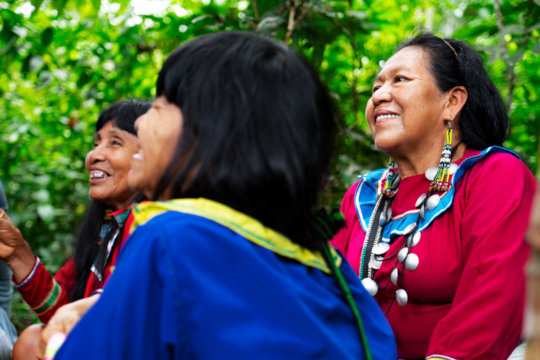 Ayahuasca is a Shipibo ancestral medicine. 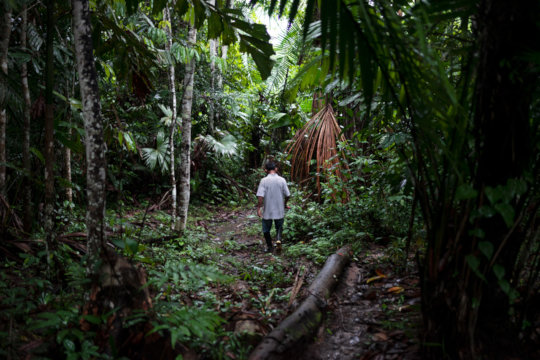 A local biologist walking in the permaculture area