By Yutaka Kikugawa and Mika Kakihara - Executive Director and Translator 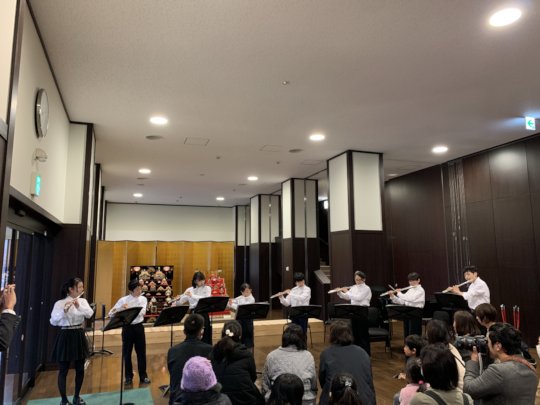 March 3rd is the Girls’ Day in Japan, also known asHina-Matsuri, or the Doll Festival. Ahead of this special day, a celebration called Hina-Meguri was held on February 16th at the Soma Civic Hall. In a warm atmosphere created by the large friendly audience with Hina Dolls, the El Sistema Ensemble successfully performed in two stages at 11:00 and 13:30 in the lobby.

This was the debut concert for the beginners’ class members who started learning the violin or the cello in last June. With the help of more advanced players, they confidently played the tunes "Twinkle Twinkle Little Star," "Ten Little Indians" and "Sakura Sakura" in both stages.

Later in the morning stage, eight flutists from the El Sistema Ensemble performed pop masterpieces, including "A Whole New World," "When You Wish upon a Star" and "Sukiyaki." The last performance in the afternoon was a french horn ensemble. The two elementary school children were proud of themselves for playing two etudes with their instructor Mr. Yamamoto.

Many of the grandparents surged to shoot pictures of their grandchildren on stage. One of them was even moved to tears by the performance of Sakura Sakura.

The concert on the cold rainy day let us spot a small achievement in the mission of El Sistema Japan -- music is not only for children but also for the whole community. Thank you so much for your continuous support to our endeavor.

Indeed the latest coronavirus pandemic has forced us to stop our routine weekly practice session as well as the once-a-year children's music festival, scheduled to take place at the Soma Civil Hall this weekend, to which everyone was eagerly looking foward. We really would like to count on you in order to overcome the challenges and fulfill our mission. 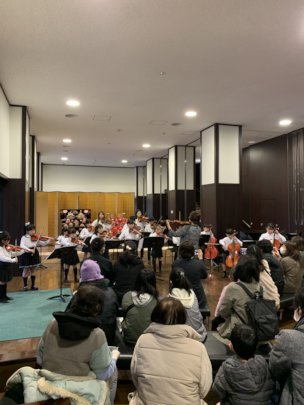 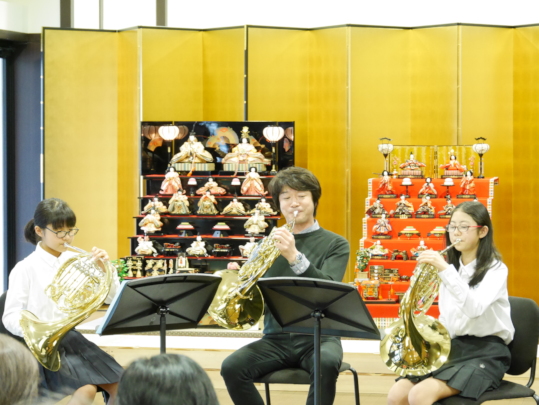 The First Concert after the Typhoon Hagibis 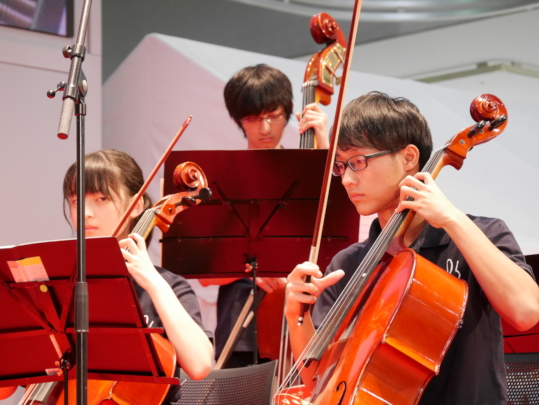 Typhoon Hagibis hit a wide range of the east Japan in October 2019 and also caused a great damage to Soma City, Fukushima Prefecture where we are delivering daily support. The city was hit by heavy flooding and water reached above the floor level. On November 23, about one month after the typhoon passed, the concert of Soma Children Orchestra was held in Iwate Miyagi Fukushima Festa, a festival featuring the Tohoku region (All Iwate, Miyagi and Fukushima belong to the Tohoku region) at MEGA WEB Tokyo.

A grade 8 student Risa a cellist of the orchestra found her instrument had been damaged by the muddy water after the flood. Despite the difficult situation as she said “I was speechless when I saw my instrument,” she started to practice by using another cello which was donated by the supporters. Fortunately she had her beloved cello repaired by the day she finally got on the stage.

In the concert, the orchestra performed six pieces including a local folk music Soma Bon Uta, Mozart's famous Eine Kleine Nachtmusik, Vivaldi's Four Seasons and L'estro Armonico and received a round of applause from the audience. After the performance, Risa said “I played with the gratitude to everyone who helped us while the typhoon disaster. I am proud of our performance.”

Mr. Kenji Goto, a Soma based luthier who diligently works for our program, said “I hope that energy of music heals children who experienced the terrible earthquake and typhoon.” In fact, the recovery of the city and orchestra from the disaster is still on the way. We also highly appreciate continuous support given by our GlobalGiving partners — thank you! 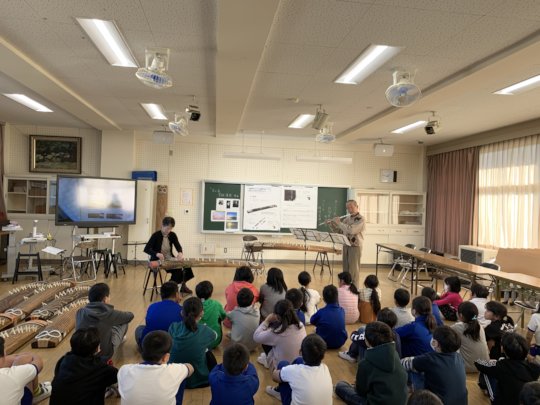 In addition to the operation of orchestra and chorus in Soma over weekends, El Sistema Japan has always been placing importance on supporting curricular activities in school as we work in partnershipwith the local Board of Education.Shown in the photos below are fifth graders attending a music appreciation workshop at Soma Iitoyo Elementary School on 21 November. With kind support from a local Japanese harp school, Ms. Monma and her students all gathered together.The students first listened to Koto, traditional Japanese harps and then tried them out. Ms. Monma played the piece Haru no Umi (Spring Sea) with Mr. Ueda, previously a member of the Board of Education, managing activities with us and now a farmer and flautist. After the performance, the children tried out the Japanese harps. There was one harp for every four children and they orderly took turns to play Sakura Sakura. Joined by recorders, all sounded quite well for their first trial.Nowadays it is rare to hear traditional Japanese instruments even in Japan. The school teachers and the board members appreciated this precious opportunity for the children to listen to and try such instruments.In small cities like Soma, schools with smaller numbers of children are often too tight in resources to hire music teachers with specialist training. El Sistema Japan assists those schools to provide higher quality music appreciation classes, specialist training on classroom musical instruments like the recorder and the melodica, support for marching bands, and so forth. This is part of the government funded disaster relief program, which sends specialists including, but not limited to, emergency school counselors to the affected region. Most of the specialists we work with are also from the region.Promoting children’s access to art and culture is one of our priorities at El Sistema Japan. It is important that children without easy access to art and culture still have opportunities to experienceand learn music of good standard. We are thankful for your support. 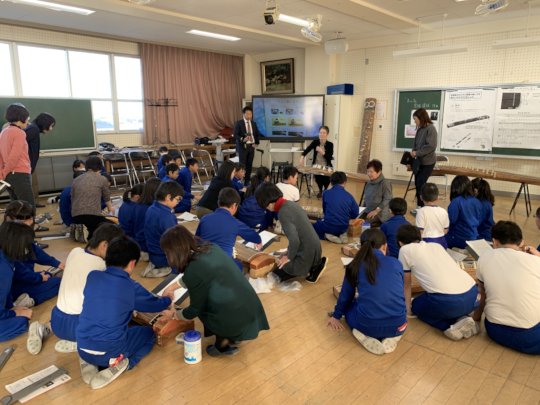