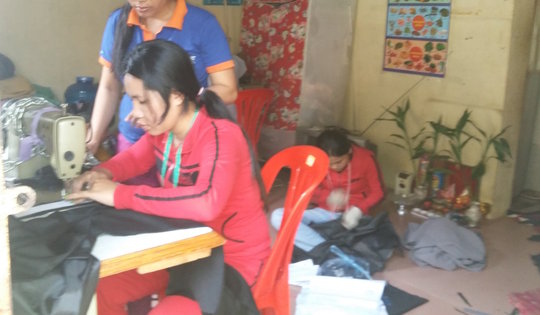 Sophea Sewing in a NFE Class!

The following story highlights the power of Lotus Outreach’s Non-Formal Education (NFE) program to alter a Cambodian women’s life. NFE offers incredible educational and vocational services to young girls and women stuck in sex work and harsh labor, in order to give them the support necessary to make profound and impactful changes in their lives and their family’s lives.

Sophea, 31 years old, was born in Roluos Village of Kompong Trobaek District in Prey Veng Province. She is the second of seven siblings. Her father died of cirrhosis when she was 13 years old, so she had to dropout of the 5th grade to move to Phnom Penh to help her aunt with household chores, which included raising pigs and selling groceries in exchange for smalls amounts of money.

After working 4 years with her aunt, Sophea left to work in a garment factory with a basic salary of $35 a month. Five years later she got married to a motor taxi driver and now has one child. Her husband and her have had many difficulties throughout their marriage and have separated twice. He is a gambler, drunk and has had various affairs on Sohpea. He also never is able to give her any money, and thus, having a husband has done nothing to lighten the load. She only decided to take him back, because she didn’t want her child to experience a life without a father like she did.

She decided to enroll in an NFE class, because she wanted to learn tailoring skills, so that she could change her career for a better life. She is facing a lot of challenges working as a hostess at the beer garden like being forced to drink a lot, which results in many stomachaches and frequent dizziness. She is also afraid that she will get cirrhosis like her father, a disease caused by poor liver. Not to mention she is often approached and harassed for sexual services.

Sophea started NFE English classes and a tailing class on January 14, 2015. She studies very hard and comes to both classes regularly. When she first joined the program, she could read some simple text, but could hardly write. She didn’t know how to do multiplication nor division. Since she used to work in the garment factory, she is picking up tailoring very quickly. She has already made 10 women’s garments and 2 male trousers. She also really likes reading. She has borrowed a life-planning book, a health related book and a magazine from the library box to read.

Sophea plans to buy a sewing machine by the end of this month, so she can start doing her own work at home. Once she finishes the skill training with the program, she would like to run a tailoring business in Phnom Penh with her sisters who are now working in a garment factory.

Sophea is extremely delighted for the opportunity to acquire literacy, numerical and vocational skills. She would like to show her gratitude to the programs and all the donors for reaching out to her and other Cambodian women and girls who need support to make the many dire and much desired changes in their own lives. 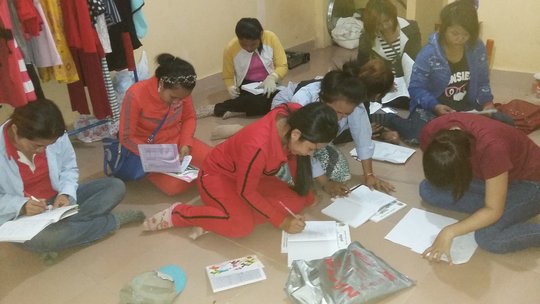 Impact on Children due to Global Giving donors.

By By Glenn Fawcett and Suraj Kumar - Project Leaders 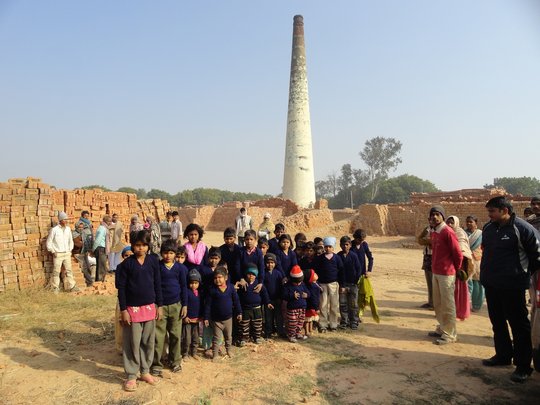 At the kiln ready for school.

Impact of this program and contribution of Global Giving & GG donors -

Since 2009, Lotus Outreach has been supporting migrant child laborers out of work and into schools through scholarships that provide free transportation and a small stipend in the Indian districts of Mewat and Palwal. Through our initial work in education advocacy, we discovered that hundreds of out-of-state children of illiterate migrants were laboring in the region’s 32 brick kilns. In the area, children as young as five work in horrendous conditions as brick kiln labor and cannot attend school. In addition to being of the lowest socio-economic caste, they were excluded from local government incentives because of their migrant status. Our program has been serving these migrant families by offering their children access to free, secure and consistent transportation to and from school and also a small stipend that has at various times provided such things as school uniforms, shoes, school-books, school bags and pullovers against the bone chilling winters, to ensure their children can stay in school.

With a tremendous amount of support from GlobalGiving donors, we were able to bring 2077 children from 32 brick kilns enrolled in three schools during the five years till date. This program was not only about access to education, it was also a continuous dialogue with illiterate villagers encouraging them to see the importance of educating their children in their efforts to break the cycle of poverty. Our work has to some extent reduced demand for the BKKs bus service that has been decreasing by year from 715 in 2009 to less than 100 by the end of 2014. We also recognise the impact of the Indian national rural work guarantee scheme (NREGA) in reducing migration by providing a minimum level of work for daily wage labor in their home villages.

We are delighted than instead of migrated with parents, children that would have earlier been working in kilns and are now staying back at home in native villages, continuing their education and helping their grandparents left behind by the family. These children, about 12 years of age and above are now motivated to continue their studies and complete school education which can make them eligible for some skill training and then get a good work. We hope that once out of work at an early age of six or seven, the children develop interest in education and then are able to complete school education as their parents are also supportive and not forcing them to work at early age. We found that migrant parents do not send their kids to schools from the place where as they are considered outsiders and movements of their girl child out of habitation is considered unsafe.

Great finish to a wonderful program:

We had 30 students from brick kilns during the academic year after the families came back in November and December 2014. Five of them have graduated from the Primary school of Bhanguri and one of them, Laxmi, will now join our Blossom Bus and continue her education in Aharwan High school. She is hopeful of completing High school and looking forward to a bright future. In her words:

“I was coming to the school for last five years traveling on buses provided by Lotus Outreach and was not much interested in education in the beginning as I thought school would be too tough. Gradually I started learning a lot because of love and affection of our teacher and started loving education and company of my beloved teacher and my friends in school. My Brother Sushil has also graduated and will also join upper primary school in the nearby village. I believe that I will not be working 14 hours a day on the brick kilns to earn my livelihood when I am grown up and married to an educated person. I have also realized that education is necessary for all. Thank You Lotus Outreach.”

And a final thanks to GlobalGiving and donors for making it possible for the Brick Kilns Kids program to assist 2077 children of the most vulnerable families to escape the cycle of poverty!!

The Gift of Living and Learning! 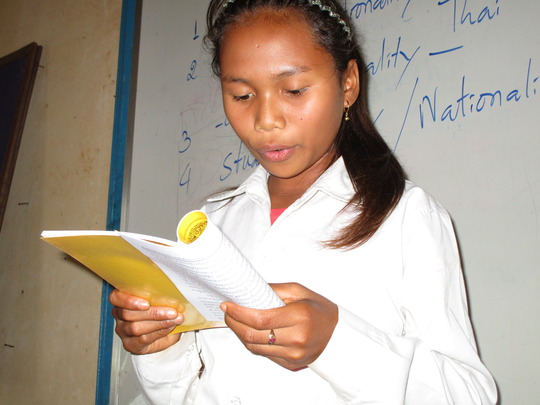 The following story highlights the huge impact this program is having on the lives of Phnong speaking minority children living in impoverished conditions within Cambodia. For just $130 feed a student in profound need like Sagn for an entire academic year, and rejoice in the greatest gift of all: the gift of education!

Sagn is a Phnong speaking student in grade 7 at Oraing high school. She lives in Potro Village within the Oraing District of Mondulkiri Province. She is the youngest child of 6 siblings; all of her brothers and sisters are married and have left home to live on their own. Sagn is 14 years old and still lives with her parents in a small cottage with bamboo walls.

Unfortunately, her father suffers from a respiratory illness and thus cannot work while her mother can only work part time in the rice fields, because she is getting older and more fatigued each day. Her older brothers and sisters did not have a chance to go to secondary school, because school is so far from their village. Living 18 kilometers away from the nearest school, Sagn never expected to attend secondary school.

Luckily, thanks to Lotus Outreach and this program, she got a scholarship from our partner KAPE that provided uniforms, a pair of shoes, study materials, monthly stipends, and most importantly, a spot in the dormitory close to the school with a very nice kitchen, toilet and pump well for all the scholarship students living there. This great opportunity has completely changed the trajectory of Sagn’s life.

Sagn has lived in the dorm since school started in November 2014. At first she was homesick and she found it difficult to live on her own, but after getting support from the older students in the dorm, she feels more confident and is now much happier. Besides her regular classes, Sign attends a study club that teaches girls how to make bracelets and Phnong scarves for the cultural center. Every day she spends three hours taking extra classes in Math, Khmer literature, and Chemistry with support from her scholarship.

During the holidays she goes home to help her mother at the rice field especially during the harvest time. “I am so happy to be a scholarship student,” Sagn stated.

“This scholarship has given me a chance to get more education than I ever would have gotten and I feel I am more confident in speaking to other people. Before I was really shy and I did not like to talk to people I did not know. Moreover, I know now that people have to help each other; not only in living, but in learning as well. I have learned a lot from the other people around me.”

Help more girls like Sagn through our PEI scholarships, and give the gift that never stops giving!!! 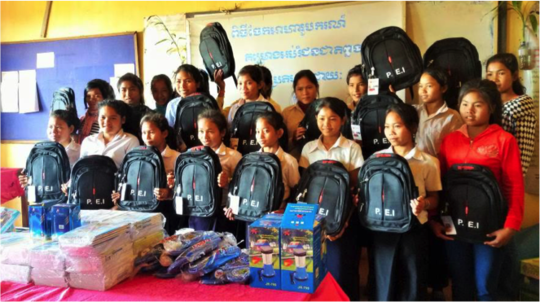 ‹ 1 ... 33 34 35 36 37 38 39 40 ... 81 ›
WARNING: Javascript is currently disabled or is not available in your browser. GlobalGiving makes extensive use of Javascript and will not function properly with Javascript disabled. Please enable Javascript and refresh this page.