Skill and Dedication at the Ubumuntu Arts Festival 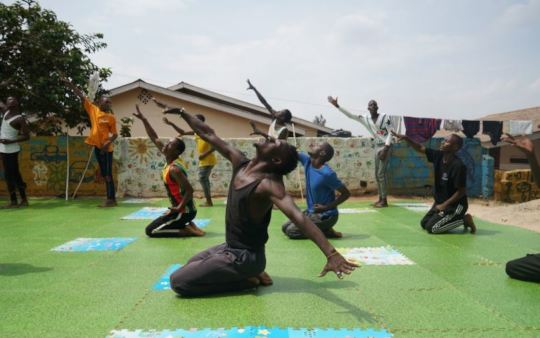 Rehearsals for the Ubumuntu Arts Festival

This past week was full of excitement and bustle for MindLeaps dance instructors as they concluded rehearsals and performed at the fifth annual Ubumuntu Arts Festival at the Kigali Genocide Memorial Amphitheatre on July 12th. For the last five years, the U.S. Embassy in Kigali has supported MindLeaps’ participation in this festival which harnesses the power of art to highlight and embrace all aspects of our shared humanity.

The theme of this year’s arts festival is “When the walls come down – truth,” a striking image that explores the fine boundaries between deception and truth, mask and reality. MindLeaps’ new U.S. Embassy-commissioned dance work, “Bound Alone,” approaches this theme from the lens of a related dichotomy: the collective and the individual. LaMar Baylor, lead choreographer and American Broadway performer, explains his motivations behind the movement: “I wanted to show the strength and vulnerability of men. I wanted to show how we can help one another, but there’s always an underlying, personal struggle that is specific to the individual.”

The choreography, which contemplates how young men can support each other during hardships, fittingly revolves around 13 young male dancers, six of whom are Congolese and Burundian refugee youth who live in Rwanda’s refugee camps. These youth were trained in 2018 to become MindLeaps dance teachers and they currently teach MindLeaps dance classes to develop life skills in vulnerable refugee children who are living in the camps. The rest of the cast is comprised of MindLeaps dance instructors from Rwanda, Uganda and Guinea. Over the intensive one-month rehearsal period, these young dancers have been living together, working together, developing their talents, and learning about the power of dance to advance youth.

Our instructors are so grateful for the opportunity to contribute to this culturally impactful festival. Their month of training helped them build confidence, improve their dance skills, and gain teaching experiences that they can’t wait to share with the kids they teach in the refugee camps. Thank you for bringing extraordinary arts and learning experiences to these vulnerable youth in Rwanda. 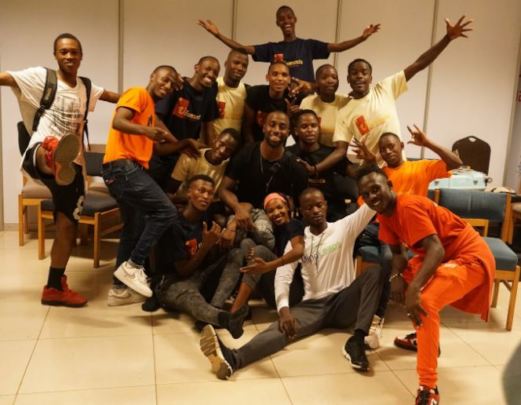 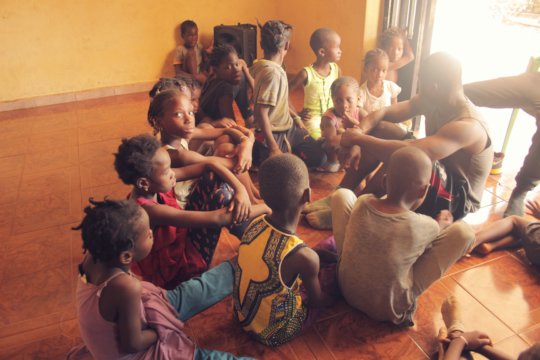 The children joining the MindLeaps program in Conakry have faced constant challenges and instability in their lives – often with no secure housing, no educational opportunities, and unpredictable living conditions.

MindLeaps becomes an important anchor for them – a point of attachment, engagement and support, giving them hope and aspirations for a better future. They find a welcoming, safe space, where the MindLeaps program puts them on a path to achieve their goals through the development of cognitive skills and the opportunity for formal education. Two MindLeaps students, sisters Kadiatou, 15, and Aminata, 13, are currently facing a situation threatening their home, but in spite of their difficulties, continue to come regularly to classes at the center. They’ve said “We would be more afraid of losing the opportunities offered by MindLeaps than losing our home.” MindLeaps gives them something they can count on.

The young people at MindLeaps in Guinea are individuals, each with their own story.

10-year-old Alhassane had never attended school before coming to MindLeaps. In the mornings he would do chores at home and then go to the market to find his mom, to see if she had money for his breakfast. The rest of the day he spent aimlessly wandering the streets. After joining MindLeaps, he has been able to learn dance and study English. At MindLeaps, Alhassane says he has found a place where he can learn. Otherwise, he says “I would be hanging around in the street, maybe trying to find a lady in the neighborhood to help me learn the alphabet.”

Young Laye had also never attended school. Every day he got up and first fetched water for his family, then went off into the streets looking for people who would pay him something to get water for them. With the support of MindLeaps, Laye no longer spends his days in the streets. He has learned his numbers and the alphabet, and is now able to write.

Pierre is 8 years old and his family could never afford the fees to send him to school. He fetched water in the morning and if he had nothing to eat at home, he went from neighbor to neighbor looking for food. MindLeaps has opened up a new world to him. Now Pierre can come to a place where education is free and he is able to get at least one meal a day. The support MindLeaps provides is making it possible for him to learn and grow.

MindLeaps is a comfortable space, offering social support as well. Ousmane is a young boy who had never attended school and would spend his days outside, playing idly or sitting by his mom as she tried to sell small items on the street. At MindLeaps, he learned to dance and most important, gained self- confidence. He has made friends and says that without MindLeaps, he would most likely be isolated, just keeping to himself.

Your generosity is helping MindLeaps give these children a sense of belonging and purpose. They are developing cognitive and social skills that will open the door to a brighter future for themselves and their communities.

A Chance to Learn 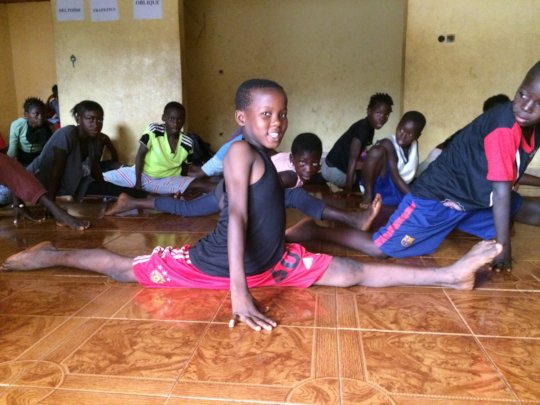 MindLeaps’ dance curriculum works to develop the cognitive and social emotional skills that will help vulnerable youth in Guinea get back on track with their schooling. In addition to dance classes, academic catch up courses are a key part of the MindLeaps program. Academic acceleration classes prepare students for entry into the formal education system or vocational training. English classes are an important part of the program at the MindLeaps center.

The opportunity to learn is changing the lives of children in Conakry, and MindLeaps has given many of them their first opportunity to learn English. 8-year-old Souleymane had never attended school. He stayed home to do chores, fetched water for the family, and then went out with his older sister to sell bananas on the street. Since joining MindLeaps, Souleymane has been learning English and dance. In fact, his mother is now telling him not to go out selling so he can attend his classes at the center instead.

Before starting classes at MindLeaps, young Sayon had also never attended school. She stayed at home doing housework all day and only went out to go to the local market. At MindLeaps she learned the alphabet, how to count in English and French, and she is now reading in English. Sayon says she loves this chance to learn. Dancing has given her confidence and she now has a community of friends at MindLeaps.

M’mahawa is 10 years old and had dropped out of school after 1st grade. She is happy at MindLeaps because she is able to dance, and now can read and write in English. She says that if MindLeaps weren’t there, she would be at home helping her mom and having a hard time trying to study on her own.

13-year-old Akime left school in the 3rd grade because his mother could no longer pay his school fees. At MindLeaps he has been able to start learning again – dance, drawing and English. Without MindLeaps, he says he would just be staying at home or playing in the streets.

The MindLeaps program in Guinea has been serving children 9 to 18 years old. Now for the first time, we are also reaching out to older youth from the community. In April, our center began offering a new program of free English courses aimed at youth age 18 to 30. Once word was out, there was an enthusiastic response from over 40 young people who signed up for the course. 32 students were enrolled, with another 10 interested youth on a waiting list. Courses were launched in May with two groups – a beginners’ group of 16 students, and a second group of 16 who already had some basic familiarity with English. Each group meets two evenings a week for two hours a session. The year-long course is run and administered by MindLeaps in collaboration with the US Embassy in Guinea.

There is a keen interest among youth to learn English. Fluency in English is seen as a major asset in today’s world, opening up opportunities to communicate on a wider scale and take full advantage of everything information technology has to offer. With your support we are able to create these new opportunities for vulnerable youth in Guinea. Education is enabling them to help move their families and community toward full recovery from the devastating after effects of the Ebola crisis. 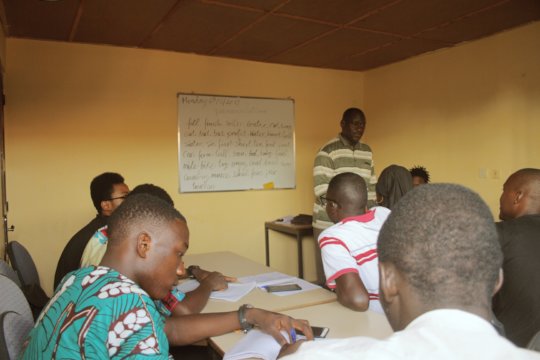 New community English class
‹ 1 ... 4 5 6 7 8 9 10 11 ... 36 ›
WARNING: Javascript is currently disabled or is not available in your browser. GlobalGiving makes extensive use of Javascript and will not function properly with Javascript disabled. Please enable Javascript and refresh this page.