A delivery has been made! 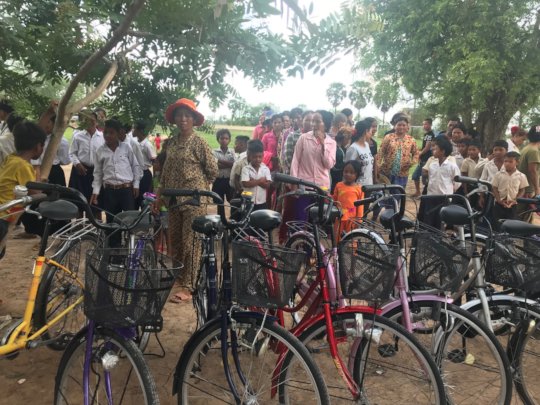 Students with their bicycle
We are happy to report that we have met half of our 2018 Education Program goal with the successful purchase and distribution of 50 bicycles!
A big Thank You goes out to INTO Giving, a United Kingdom-based organization that supports disadvantaged children's education and their teachers across the globe. INTO Giving presented Trailblazer with a $2750 grant which allowed for this project to begin.
To describe how this project was coordinated, the local director for Trailblazer, Mr. Ratanak, attended meetings with three of the districts with which Trailblazer works: Bakong, Soutr Nikum and Chikreng. At these meetings district officials and other NGO [non-government organization] partners were in attendance. The Chikreng district education officer, Mr. Bunthorn, approached Mr. Ratanak and asked if Trailblazer Foundation could help the remote schools in his territory. Mr. Bunthorn was aware that Trailblazer has an education program and is working with districts to advance their education programs. Mr. Ratanak replied that Trailblazer had the funding for 50 bicycles to be given to students in need, and asked Mr. Bunthorn to source remote schools where there was a need for bicycles for its students.
On May 7, 2018, Mr. Bunthorn called to report he had located three primary schools with students identified as poor and in need of a bicycle. Those three schools were: Ta Por Primary School, Kok Thlong Primary School and Dong Pa Av Primary School. A distance of 78km from Siem Reap city.
As part of Trailblazer's due diligence, Ratanak called the Pongro Krom commune chief to double-check and confirm these three school locations and that the students of those schools were properly identified as needing bicycles. All fifty families held a Cambodian government identification card identifying them as level 3 poor. [Poor levels rate from level 1 which equates to $.70 per person per day, to level 5 which equates to $3.75 per person per day. The international poverty line is $1.25 per person per day.] *See link for further details.
With the schools and students having been identified, Ratanak proceeded with the project and organized for the distribution of the 50 bicycles on May 9, 2018 to the students of the three schools.
As part of Trailblazer's implementation process, recipients of the bicycles must agree to:
Here are photos of the distribution and the meeting with recipients to discuss the criteria.
Thanks again to INTO Giving for helping us reach half of our goal to provide bicycles to 100 students in 2018. With your continued support and contributions we hope to meet our goal in its entirety. 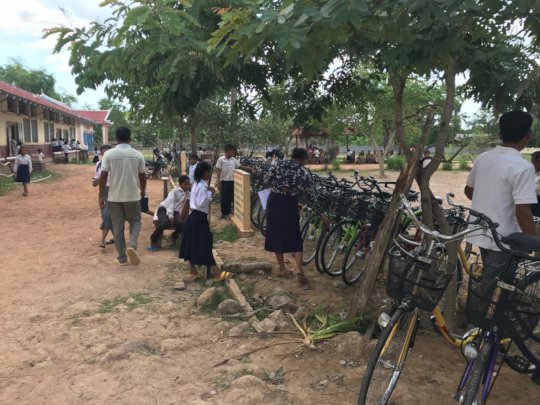 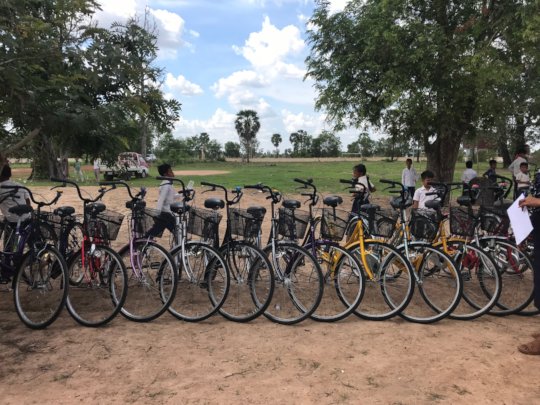 a line of bicycles 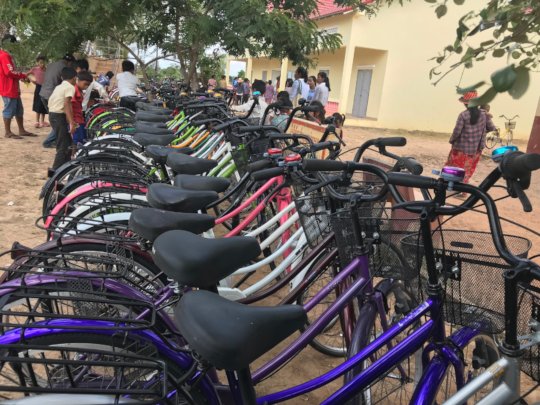 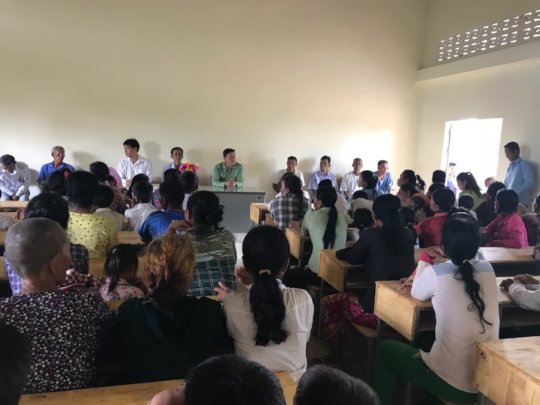 Meeting with recipients of bicycles

The prevention of disease and the effective strategies to reduce disease and improve health, is the basis for Trailblazer's rural community development through the installation of wells and providing the access to a consistent and abundant water supply.

For those of us who live in developed countries, we can simply turn on a faucet and experience the immediate reward of access to water. In Cambodia, villagers often have to walk long distances to acquire water. That task typically falls to the women, while the men are working to financially support their families. Every day women throughout the world [collectively] spend 200 million hours collecting water.

The time women spend collecting water takes away from the time they have for cooking, cleaning, working, or caring for their children. A community cannot flourish, nor a country develop, if its people are too ill to work and financially provide for their families, or the children are to sick go attend school and obtain an education.

Water is vital to having good personal hygiene, flushing a latrine, washing hands, or bathing. Human survival requires the most basic of needs, water. The lack of water plays a major impact on the health of children, especially, in poor environments. A well offers the ability for regular bathing which improves the hygiene and health of the entire family.

I wish to thank all our donors who have contributed to our Health program by donating a well. To date, we have already completed 30% of the 100 wells on our 2018 well drilling schedule. These families are happy to have access to a year-round supply of water. They have new hope for better health, the ability to earn an income, and for their children to get an education.

Thank you for being part of making this significant difference in the lives of hundreds of rural families each year.

The time is now! 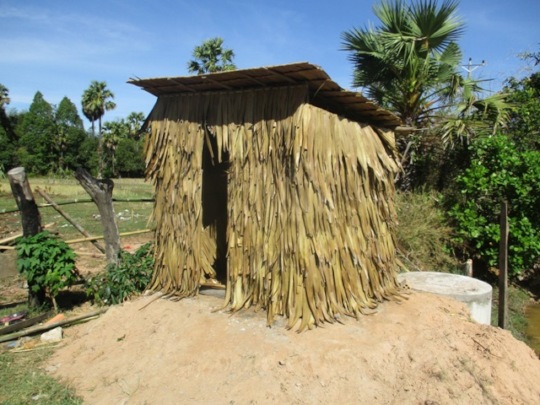 In the developed world, we understand the importance of proper sanitation and the impact it has on our health. In Cambodia, many rural families do not have a latrine. Instead, they are forced to use the area around their home, contaminating their and the entire community's water supply, adding to the serious problem of poor health conditions.

Having to relieve oneself in the open poses risks and challenges, especially for women and children. A latrine is not only a more comfortable, safe place for individuals to dispose of their waste, but latrines keep flies away from the waste. Flies carry germs from thuman waste to other areas, resulting in the spread of diseases, which can lead to death. With a latrine, flies cannot make contact with the human waste, therefore, the threat of diarrhea, worms, cholera, and typhoid fever is reduced.

With the installation of a latrine, the recipient family receives training on the proper use and maintence of their latrine, along with the importance of good sanitation and the impact it has on improving their health. It is important they understand these basic facts. Trailblazer knows this education is needed to ensure the project is successful.

The time to install latrines is during the dry season, which is January through June. When the rainy season hits, the land floods and makes construction of latrines impossible. The rains are coming to Siem Reap province. It is important that we work now to help rural families achieve improved sanitation and health.

However, we have not reached our goal in funding to be able to provide latrines to rural families on our list who are wanting, needing, a latrine. We need your help, today, to make this project become a reality and bring those families a safer, cleaner environment.

Thank you for your support of this important, live-saving, project.

‹ 1 ... 7 8 9 10 11 12 13 14 ... 18 ›
WARNING: Javascript is currently disabled or is not available in your browser. GlobalGiving makes extensive use of Javascript and will not function properly with Javascript disabled. Please enable Javascript and refresh this page.