Nazifa is frightened, and education is her key. 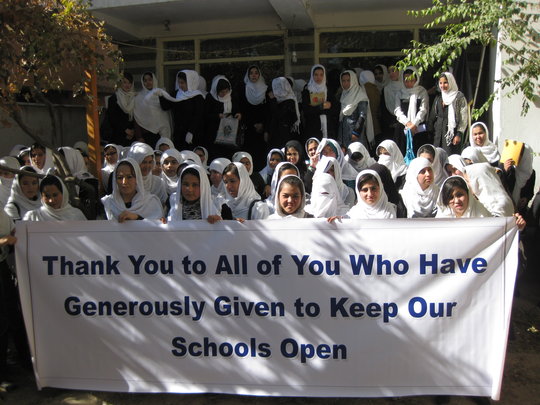 Nazifa is an adult woman AAE student studying at the level of 11th grade. She wants children, but cannot and the infertility treatments are too expensive for her.  Winters are very cold and hard for Nazifa and her husband, because he alone does not earn enough to meet all of their expenses, so they do not have power for heating. Since her husband must work late, she is often alone late into the night.

Nazifa shares, "Mostly my husband returns home very late, and I don’t like being alone at home especially when it's dark.  I am afraid of darkness and being alone. There is no power and everywhere is so dark."  Fear adds to poverty yet Nazifa is determined to make a better life through education.  She wants a good job and the ability to have children

AAE has given her this opportunity.  Thank you for your support to make Nazifa's life better.

How can YOU support AAE this May?

In the midst of a year full of change for Afghanistan, we are excited to have you as part of our ongoing efforts to support quality education! We are so thankful to you for your continued support, and our students are forever grateful for the opportunities you have given them. Education remains one of the most important factors for peace.

We have some upcoming opportunities that we want to share with you!

1. May Bonus Day is May 7th, starting at 9:00 AM EDT. GlobalGiving will be matching donations at 30% up to $1,000 so this is a fantastic way to make your donations count for even more. Every little bit goes so far to support our students and help them have all the supplies and tools for success, so adding 30% is a big deal!

2. To get everyone excited for Bonus Day, we are having a video exchange with the AAE students! Visit the link below to check out how you can make a video, and then see the students you are working to help respond. This is an opportunity for you to become closer with the students and organization, and to have fun sharing your story. We encourage you to participate and let your friends know about this fun new way to get involved and spread the word about peace through education.

Aid Afghanistan for Education (AAE) is a non-profit organization registered with the Afghanistan Ministry of Economy. It is recognized by the Ministry of Education and therefore able to provide high school diplomas to its students, opening doors to higher education.  Not all NGOs in Afghanistan can do this.

AAE's mission is to unlock the potential of young marginalized Afghans through education as a means to prepare them to fully participate in the society. The goal is to provide quality education to ensure students, who do not otherwise have access to formal education, receive quality teaching. AAE established its first education programs in 2003 in Kabil with 1,100 students. 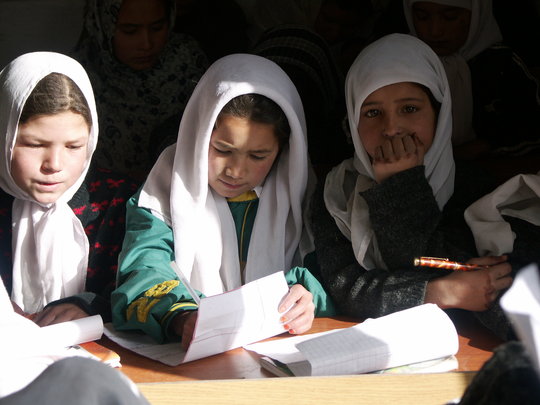 By Adam A. Azim - Member, Board of Directors 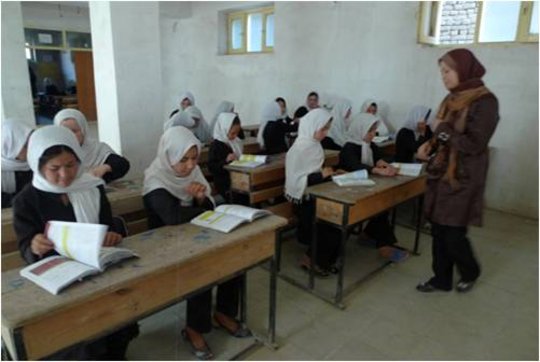 Sabira is an Afghan woman who got married almost 20 years ago, and has three children.  Her husband works as a clerk at the Ministry of Economics. His monthly salary is Afs.4500 (US$77).

One of her children is a first-grader in elementary school.  Sabira herself is in the 9th grade.  Her two other children are too young to go to school, so when she goes to school, she leaves them with her neighbors until she returns home.

She gets up very early each morning to prepare breakfast for her husband and children. When her husband leaves the house she attends to different chores such as washing dishes, clothes, cleaning the home, sweeping the yard, taking care of her children, making lunch, etc.

The winter cold is overbearing, but due to the weak economy, Sabira cannot buy any heating material.  Plus, her husband suffers from a gallbladder problem that requires an operation, but has no money for doctors' fees.

Sabira's goal is to complete her education at AAE so that she can find work and help support her family. She needs all the help she can get to survive, along with the many other Afghans who are in dire need of help.

Aid Afghanistan for Education (AAE) is a non-profit organization based in Afghanistan. In 1996, Hassina Sherjan left the United States to establish AAE for the purpose of stopping the plight of Afghan women and children under the inhumane and oppressive rule of the Taliban. Hassina had to establish underground schools in Afghanistan for women and children during the Taliban era because the Taliban prohibited women from attending school. AAE's mission is to unlock the potential of young, marginalized Afghans through education and allow them to escape poverty.

Give the gift of Education and Peace

AAE depends on your support to continue its work to provide education and hope for the families of Afghanistan. Education opens the doors to employment, and employment is the foundation for the survival of nations. It all leads to stability and peace. After decades of war, Afghanistan wants the peace and prosperity it once enjoyed. 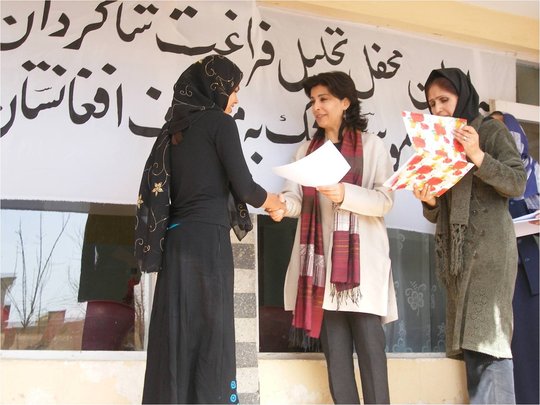 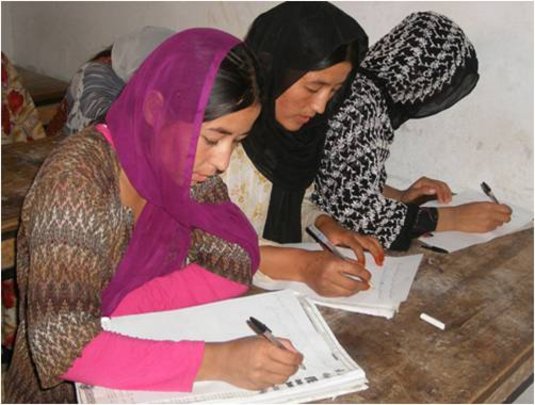 Students at an AAE-based school 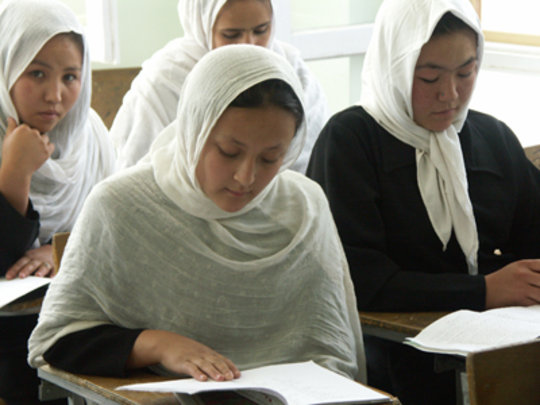 This report includes a SMILEBOX delivery of a photo album to thank you for your support.  You will receive this under separate cover, so please watch for a Smilebox delivery in your emails.

A Story of an Afghan Mother

Nadia is 29 years old.  She supports a family of nine, children plus her in-laws and husband's uncle who is an elderly man with disabilities and cannot work.  Nadia dropped out of school at 16 as a young bride.  Ten years and 3 children later, she learned about Aid Afghanistan for Education (AAE).  She quickly took the chance to be an educated woman and perhaps a breadwinner.

She just completed her education a few months ago and now works as a Kindergarten teacher.  Her monthly income of $80 is vital and helps the family.  Her husband only makes $160 a month, so without hers, life would be nearly impossible.

Nadia's goal is to become a Chemistry teacher.  She has applied to enter university and is waiting word.  She vows to see that her own children receive their education.

Your Support Creates a Legacy

By contributing to AAE, you have helped support other mothers like Nadia.  When you educate a mother, United Nations research shows that an entire community is impacted with better health and education for children. Plus, we have expanded to include a boys school, because boys, too, need education to find hope for the future in Afghanistan.

This Holiday Season, you can expand your legacy by becoming a "recurring donor."  A recurring donor sets up an amount to be donated ($10 to $200) each month for a minimum of 3 months.  If you do this during the LAST 12 DAYS of DECEMBER, Global Giving will match your donation for the month of December.

PLUS, during December, Global Giving is hosting another Challenge that gifts the winning projects with $3000 to $500 depending on how much money is raised by 30 or more donors.  Recurring gifts and gifts purchased through Global Giving's Gifts for Good count toward this challenge.

Our Bird of Peace on Gifts for Good directly supports the AAE schools and the people who crafted the birds at Boumi.com.  We're educating and employing.  Look for AAE's Birds of Peace and enjoy them as beautiful, hand-crafted gifts for the Holiday Season.

AAE depends on your support to continue its work to provide education and hope for the families of Afghanistan. Educations open the doors to employment, and employment is the foundation for the health of nations.  It all leads to stability and peace.  After decades of war, Afghanistan wants the peace and prosperity it once enjoyed.

AAE’s mission is to unlock the potential of young marginalized Afghans through education as a means to prepare them to fully participate in the society. The goal is to provide quality education to ensure students, who do not otherwise have access to formal education, receive quality teaching. AAE established its first education programs in 2003 in Kabul with 1,100 students.

AAE is also the only NGO with a comprehensive accelerated education program for the female and male population who have not had access to education or do not have access to education due to the MoE’s restricted policy[1]. AAE students complete their high school within 7 years and 9 months.

AAE’s education programs support the first and second priority areas identified by the Ministry of Education by creating education opportunities for young Afghans, mainly for girls in very rural and remote areas of the country. Therefore, AAE’s accelerated education does not only benefit the young Afghan girls to catch up and continue their education, but it also contributes towards the accomplishments of national level education plans by the Ministry of Education.

With successful conduct of final examinations in Kabul, 117 students of 12th grade were graduated and received admission to the government administered Conquer examination. As reported so far, 29 of these graduates who sat the Conquer have received admission to various higher education institutions in the country.
Out of nine 12th grade students of Bamyan School, eight of them attempted to take the government administered conquer exam this year.  Meanwhile, 82 earlier graduates of Badakhshan, Parwant, Ghazni and Bamyan provinces also took the Conquer exams this year and 24 of them gained admission to various higher education institutions.
[1] Article 268 & 269, Chapter 7, law on acceptance conditions to primary grades Article 46, law on accepting conditions to secondary grades 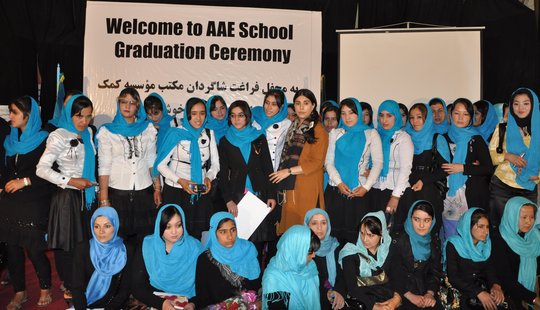 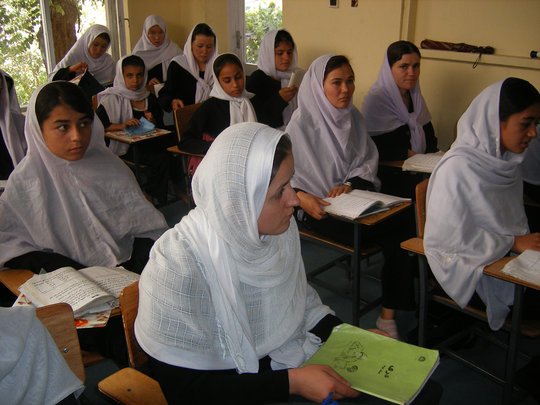