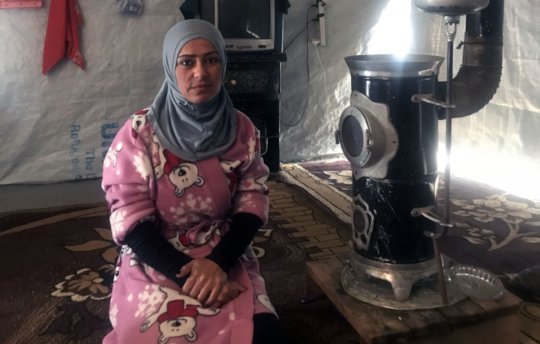 Fatima* in her tent

Thanks to your generous contributions, Concern Worldwide continues to work with Syrian refugees and internally displaced persons in Syria, Lebanon, and Turkey. We provide for basic needs, along with education and psycho-social support, depending on the context and the needs. Today, I would like to highlight our work to upgrade Informal Tented Settlements in Lebanon.

With 1.5 million Syrian refugees taking shelter in the country, Lebanon is currently housing the highest per capita number of Syrian refugees based on its population size. By the end of 2017, 36% of the Syrian refugees in Lebanon reported having no member in their family currently employed, which resulted in negative coping strategies, such as living on credit and borrowing excessively. This statistic highlights the vulnerability of Syrian refugees, and to further emphasize the point, 91% of Syrians in Lebanon describe themselves at food insecure.

Fatima* and her mother, who is ill, fled to Lebanon to escape violence in Syria. They currently live in tents in an Informal Tented Settlement (ITS) in North-West Lebanon, about a 90-minute drive from the heavily damaged Syrian city of Homs. They had both hoped that an escape from Syria would lead to a better life, but they now find themselves struggling to survive.

“I was living in heaven before and now it feels like I am in hell,” Fatima says.

“The hardest thing about my life is getting the money to buy bread and medication for my mother, not to mention the rent for the tent. I work five days a week in agriculture and barely make enough. There is nothing harder than this life.”

When Concern Worldwide arrived to assess the settlement, we noted that the welfare of the settlement’s inhabitants was severely negatively impacted by the muddy and impassible paths and roads. The whole settlement was left isolated from relief services due to the conditions of the paths, as sanitation services, water, and mobile clinic vehicles were unable to access the site. Young children were socially ostracized from going to school due to their muddy feet and were forced to wear plastic bags around their shoes.

“I felt like we were isolated from the world.” Fatima said.

In order to address the problems in the settlement, Concern provided the refugees support to gravel the path, allowing life-changing services to access the community for the first time. The access has made it much easier for Fatima’s mother to access the medical care that she needs, and has allowed the children of the settlement to attend school with clean feet. While providing an informal tented settlement with gravel might seem like a simple thing to do, Fatima explained to Concern staff that the pathways have changed their lives.

Despite improved conditions in the settlement, Fatima still longs to return to her homeland once the violence has receded. Thanks in part to your contributions, Fatima and her mother can live in improved comfort today while retaining their hope for a better future. 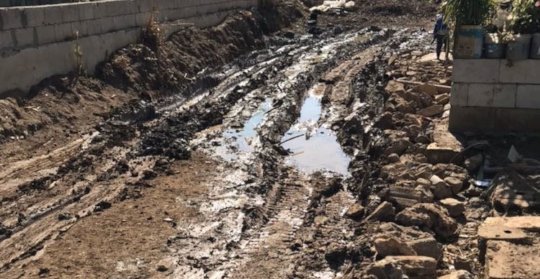 A path in the settlement in terrible condition 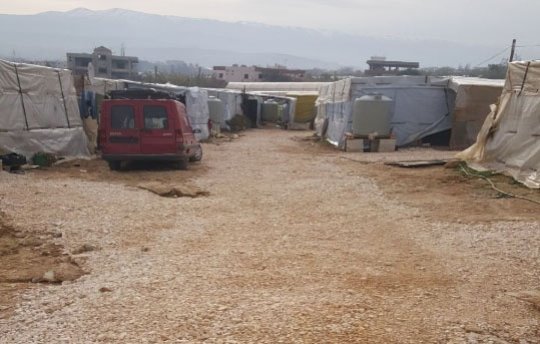 Thanks in part to your generous contributions, Concern Worldwide continues to provide life-saving assistance to vulnerable Rohingya refugees in Bangladesh. Since August of 2017, 671,000 Rohingya people have crossed the border into Cox’s Bazar, Bangladesh. The vast majority of the refugees have found temporary shelter in densely populated camps in Cox’s Bazar, leading to overcrowding and health concerns. The hygiene, nutrition, and general health of the people is poor, and many of the refugees are living with the psychological trauma caused by torture, rape, and the experience of fleeing for their lives in Myanmar.

The cyclone and monsoon season will hit sometime between April and June, leaving the hills that the Rohingya are staying on at risk of landslides and flooding. With this in mind, Concern has been working on risk mitigation and emergency response plans in the likely event that landslides, flooding, and/or cyclones damage vulnerable housing structures.

I would now like to share a story about two of our beneficiaries whom your donations are helping:

It took *Layru and her family 15 long days to reach Bangladesh from her village in Myanmar. They travelled by foot, leaving with just the clothes on their backs and with what little food they had. The journey was long and treacherous. Ten members of Layru’s group were killed trying to reach the border to Bangladesh, including her 40 year old cousin, *Dil.

When asked why she left Myanmar, Layru says that their home was attacked by the military and burnt to the ground. “Our next door neighbor’s child was killed and the body thrown in the sea.” She says. “Attractive girls were taken by the military and raped.”

Layru says her two year old daughter, *Hala, was already thin when they lived in Myanmar, but that the long journey to Bangladesh affected her health badly. When Hala arrived at the camp, she was just 11.6 lbs in weight, or half the weight of a healthy child her age. A Concern Worldwide community health worker visited their dwelling in the camp and referred Hala to the Concern nutrition center. She was found to be severely acutely malnourished, and was put on a diet of therapeutic food in order to regain her strength.

Concern plans to continue to provide nutritional support to vulnerable refugees, while responding to emergencies as they arise during the upcoming cyclone season. On behalf of Concern and the Rohingya people, we thank you for your generous support, which allows people like Layru and Hala to begin to rebuild their lives. 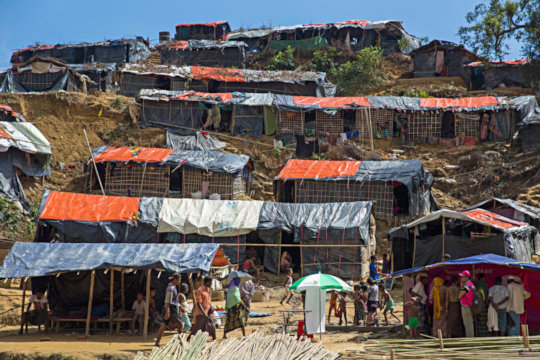 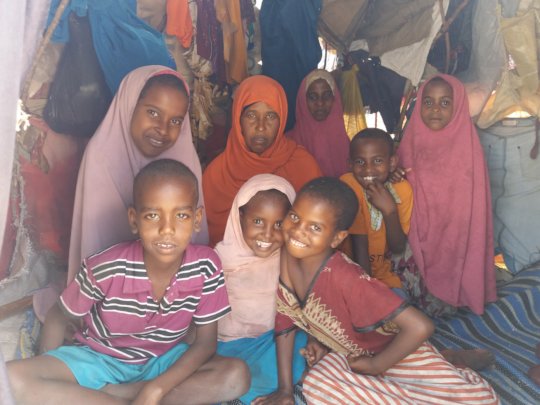 Jamilah* and her children

Concern Worldwide continues to respond to the hunger crisis in Somalia, South Sudan, Ethiopia, and Kenya. Thanks to your generous support, our 1,200 staff members on the ground throughout these four countries continue to provide emergency nutrition programming, safe drinking water and latrines, emergency cash transfers, and other life-saving interventions. Today, I would like to again take the time to spotlight Concern’s work in Somalia.

Even though it is now 2018, Somalia continues to suffer from an extreme drought, which has in turn led to crop failures and a loss of livestock. This has severely affected production systems, and has caused a spike in food insecurity and malnutrition. We are combating the crisis by assisting internally displaced persons (IDPs) with unconditional cash transfers (UCT), which are an effective intervention during droughts when markets are still functioning, as they allow people to purchase life-saving food, water, and non-food items for themselves. This gives them choice and dignity while also supporting local livelihoods and markets by providing cash inputs into the local economy.

We target new arrivals in the IDP camps, as they generally have very few resources when arriving from the countryside. Concern and partner staff work closely with community and IDP camp leaders to identify families most in need of cash support and subsequently select households based on a number of key vulnerabilities. I would like to highlight a story of a family who has benefited from emergency cash transfers.

Jamilah* is a 41-year-old mother of seven children (2 girls and 5 boys) between the ages of 3 and 13. They are originally from Furuqlay in the Lower Shebelle region of Somalia, and they have been living in Nasib camp for Internally Displaced Persons in the Garasbaley District of Mogadishu for eight months. Jamilah recalls her life back in Furuqlay:

“We faced big problems. I will never forget and cannot describe enough here of what I have passed through with the children. My children are from different fathers and no one has been helping me with anything, as the fathers of my children are dead. So all in all, I’m the only one struggling with the children, no one is raising them with me. They are not in school.”

Before the fighting began, Jamilah’s daily routine in Furuqlay consisted of working on her farm and looking after her livestock in order to earn money to feed her children. On top of this she also performed all of the family’s chores.

“I normally faced some challenges like not having enough to eat three times a day. It is difficult to be with your children because as children they don’t understand that there is nothing to eat. The three year old, when she was younger, used to scream for my breast but the breast did not have enough milk to breast feed so the baby cried throughout the day and night. I became stressed mentally and physically due to the fighting and hunger that persisted.”

After receiving the unconditional cash transfers from Concern for the past four months, Jamilah says:

“With the cash I have started a small business selling small goods. I sell my goods outside of my shelter because I do not have enough money to build a shop. In the coming months I want to grow my business and build a shop. I thank Concern Worldwide for giving me this kind of opportunity.”

Thanks in part to your generous contributions, Jamilah now feels more hopeful and happy as a result of the income she has received from Concern.

“My highest desire is being able to feed my children every day. I’m thanking God and Concern Worldwide that I can now feed my family.”

*Name has been changed to protect Concern’s beneficiaries 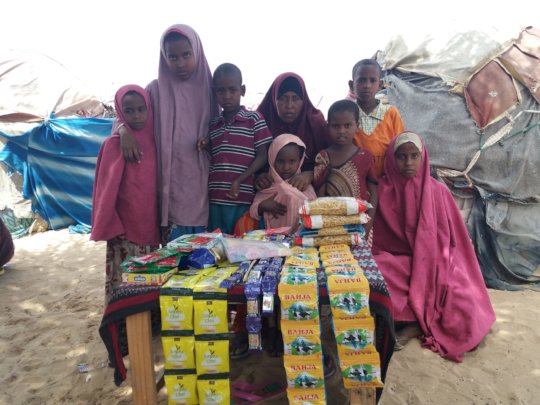 Jamilah* and her children in front of her shop
‹ 1 ... 7 8 9 10 11 12 13 14 ... 21 ›
WARNING: Javascript is currently disabled or is not available in your browser. GlobalGiving makes extensive use of Javascript and will not function properly with Javascript disabled. Please enable Javascript and refresh this page.